The state of Florida is reporting 10,249 new cases of Covid-19 and 173 additional deaths on Thursday, breaking the previous record of 156 deaths on July 16, according to Florida Department of Health.

This brings the state's total cases to at least 389,868 according to the state department of health. The statewide resident death toll is now 5,518. 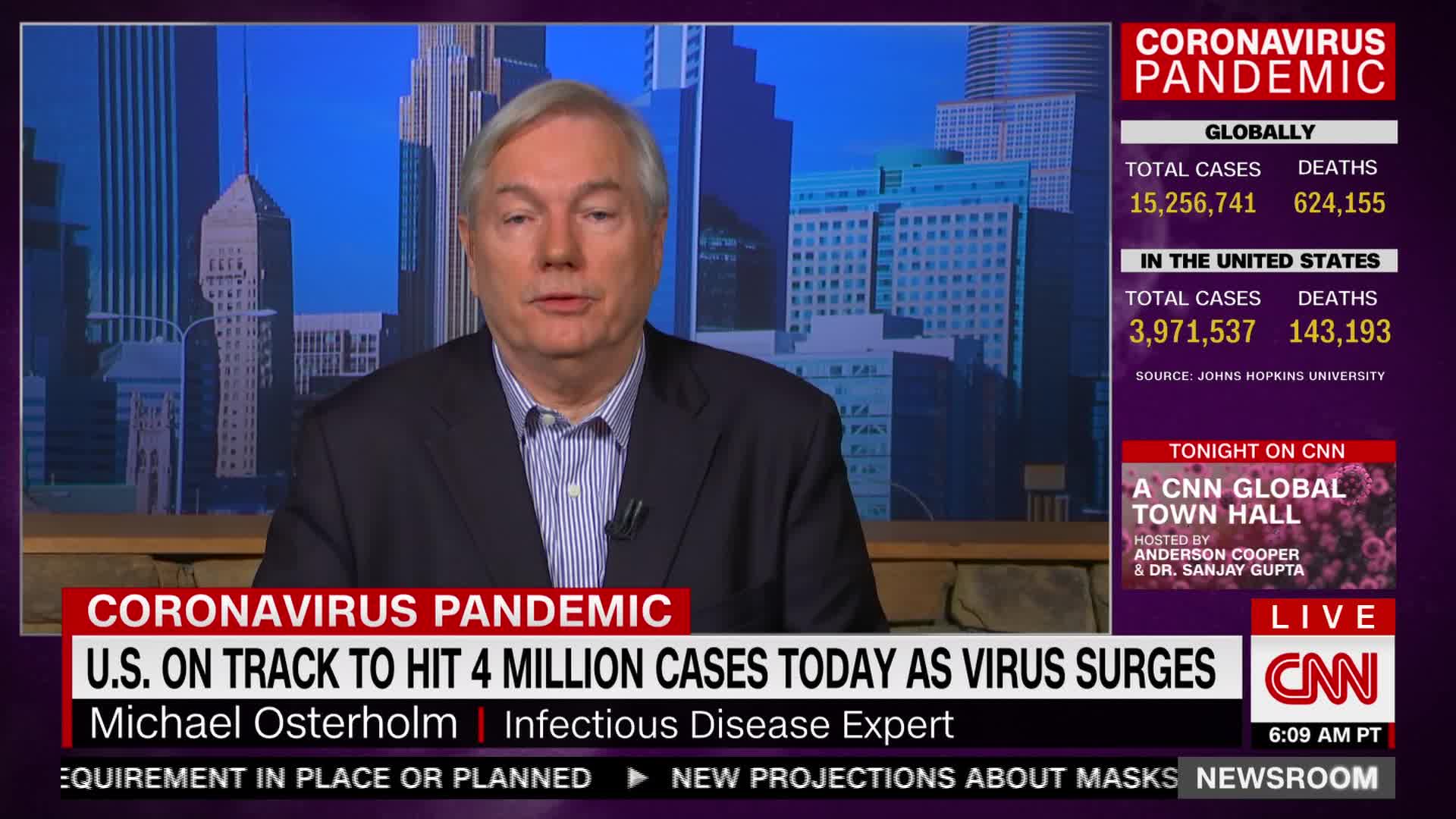 Infectious disease expert Michael Osterholm, director of the Center for Infectious Disease Research and Policy at the University of Minnesota, says it’s very likely that the world will never be rid of coronavirus.

“We will never eradicate this virus,” Osterholm said on CNN’s “Newsroom,” comparing the coronavirus to HIV, explaining that we’ll be able to control it but it’ll never fully disappear.

“This is here for the rest of all humankind. This is a virus we’re never going to get rid of,” he said.

“Until we actually have a commitment to getting this virus to a very, very low level, we're not going to really do much except continue to put out this raging forest fire the best we can,” Osterholm said.

Osterholm also said that while great progress is being made in the development of Covid-19 vaccine, the first iteration will be only one step.

“The best, I think, we can hope for is a vaccine that protects most of us for at least months and maybe not years. That next level of vaccines would try to do more with the immune system than we have now. But they're far, far off into the future. They’re not going to have any impact on what we're doing right now.”

Treasury Secretary Steven Mnuchin called the discussions between White House negotiators and Senate Majority Leader Mitch McConnell “very productive,” but acknowledged that while there is a “fundamental agreement,” both sides still need to review and finalize text – which can be a time consuming process.

“Whether this gets introduced today or not, we’re still looking at the timing,” Mnuchin said. Senate Republicans had planned to introduce the multi-part proposal on Thursday.

“We’re working expeditiously and it’s why we’ll probably be back up here this afternoon,” Meadows said.

The real deadline negotiators are focused on, Mnuchin reiterated, is the expiration of the federal enhancement of unemployment insurance at the end of next week.

On unemployment insurance, Mnuchin reiterated that the GOP plan would seek to replace the $600 enhancement with the equivalent of “approximately 70%” of wage replacement.

Other key details of the stimulus proposal: Negotiators are still working through the mechanical details of how to implement that given the issues many states have with their individual systems. The benefit extension would be through the end of the year.

Mnuchin said on direct payments, “We’re talking about the same provision as last time. Our proposal is the exact same provision as last time.” Senate Republicans have proposed targeting the stimulus checks toward lower-income individuals. In the $2.2 trillion CARES Act, checks of up to $1,200 for individuals and $2,400 for families based on adjusted gross income, and $500 for each child.

On the Paycheck Protection Program, Mnuchin said the proposal would allow for businesses to apply for a second forgivable loan through the program if they have under 300 employees and can demonstrate revenue losses of 50 percent or more.

As to the long path ahead for negotiations with Democrats, Mnuchin pointed to past deadline deals made with House Speaker Nancy Pelosi.

“We can work quickly when there’s areas of agreement,” Mnuchin said.

Community spread of Covid-19 must be controlled in order to reopen schools safely, Dr. Wendy Armstrong, a professor of medicine at Emory University School of Medicine, said on Thursday.

Armstrong said countries that have been successful in resuming in-person education for children have been able to do so due to low community transmission of the virus at the time and careful measures to avoid spread in the classroom.

"In order for schools to open safely, community spread must be controlled and must not be explosive," Armstrong said during a virtual panel discussion hosted by the Infectious Diseases Society of America and The School Superintendents Association.

"There need to be thoughtful evidence-based plans for what to do when positive students are identified," Armstrong explained. "Schools must plan when should they close again. And these plans must be flexible to accommodate new knowledge.

Reopening schools may underscore disparities that have being brought to light by the pandemic, Armstrong said. "Clearly, more-resource schools are going to have more options available to them than schools with fewer resources, and there is the risk that this could promote the disparities that already exist with this virus among our children," she explained.

Noelle Ellerson Ng, an associate executive director of policy and advocacy with AASA said "there will be very few school districts that will fully open," adding that when it comes to reopening schools, "it absolutely has to be a state and local decision informed by science, guidance and best practices driven by doctors, health policy experts and scientists."

"That is how you get ahead of something like a pandemic. And then you arm your education leaders – like superintendents and school board members – to then apply that to their areas of action," Ellerson added.

The UK government has announced additional places where face coverings will be mandatory in England starting Friday.

According to the Department of Health, the enclosed public spaces where face coverings will be mandatory are:

“It will be compulsory to wear a face covering when buying food and drink to takeaway from cafes and shops. If you are in a premises where you are able to sit down and consume food or drink that you have bought, then you can remove your face covering in order to eat and drink on site,” the release said.

The public will not have to wear face coverings in venues such as pubs, restaurants, hairdressers, movie theaters, theaters and gyms. Children under the age of 11 and people with disabilities or certain health conditions will be exempt.

“Under the new regulations laid today, members of the public will need to wear face coverings - for example, a fabric covering, scarf or bandana - that covers the nose and mouth in additional enclosed public spaces, as well as frequent hand washing and careful social distancing,” the health department said.

Businesses will not be required to enforce the rule, with the government emphasizing that “the responsibility for wearing a face covering sits with individuals." However, businesses are encouraged to “take reasonable steps to encourage customers to follow the law," including through signs and providing other information in store.

Mnuchin said the outstanding issue is reviewing final text, which they will continue to do throughout the morning.

Mnuchin and White House Chief of Staff Mark Meadows declined to commit to the public release of the multi-piece plan today.

What this is about: McConnell, after days of intraparty disputes and splits spilling into public view, will move Thursday to unify Republicans behind their initial $1 trillion coronavirus relief proposal.

Over the course of the day today, the proposal is expected to be rolled out in pieces by the key Senate Republicans on each section, finally setting the stage for long awaited negotiations just days before the expiration of crucial federal unemployment benefits.

You can read about what's expected in the plan here.