Covid-19 hospitalizations in Florida have increased 83.5% since July 4, according to data released to CNN by the state’s Agency for Health Care Administration (AHCA).

According to AHCA, the agency began collecting the data on July 4, but had only publicly released hospitalization data as of July 10. CNN obtained the data through an information request.

Remember: Florida’s hospitalization data only includes patients in which Covid-19 is the primary reason for admission and care, according to the AHCA. That means patients who are already at the hospital for other medical issues and have tested positive for coronavirus are excluded from the state total.

McDonald's and Chipotle announced they would soon require customers to wear masks or other face coverings as cases of Covid-19 surge across the United States.

McDonald's announced Friday that starting August 1, customers who walk into its restaurants will have to wear face coverings.

Chipotle's mask requirement was effective Friday, and signage has been put up at restaurants to let people know about the policy, a spokesperson told CNN Business.

McDonald's said that about 80% of its restaurants are in areas that already require face coverings. But "it's important we protect the safety of all employees and customers," the company said in a statement.

"In those situations where a customer declines to wear a face covering, we'll put in place additional procedures to take care of them in a friendly, expedited way," McDonald's said, adding that that employees will be trained "to ensure they are prepared to address this new policy in a friendly and positive way."

Customers who enter a McDonald's location without a mask will be offered one by an employee. If they refuse to wear it, they'll be asked to stand at a designated spot, away from other customers, where they'll receive their orders.

McDonald's also said Friday that it is continuing its pause on reopening dining rooms for another 30 days.

As many people as possible should get vaccinated for influenza this year, as Covid-19 will complicate flu season, Dr. Anthony Fauci, the director of the National Institute of Allergy and Infectious Diseases, said Friday.

"Certainly if we get anything that resembles a typical influenza season, there will be complications and confounding," Fauci told the Washington Post’s Robert Costa during a Post Live event.

Fauci continued: "If we have Covid in the fall and winter, which is likely we will... if you have two co-circulating respiratory diseases, it makes things more complicated. And for that reason, one of the things we can do is to make sure that we get as many people vaccinated for influenza as we possibly can. Because that would ultimately help to mitigate against at least one of those two potential recirculating respiratory diseases."

The health department in Harris Country, Texas, is issuing an order requiring all public and non-religious private schools in the county to remain closed to in-person instruction until at least Sept. 8, County Judge Lina Hidalgo said Friday.

She said that date may be too early, and the start of in-person instruction may be delayed further. Officials would need to get the virus under control before they can “responsibly bring our kids back to in-person schooling."

Hidalgo said that Harris County, not including Houston, has 552 new Covid-19 cases on Friday. She added that while they are seeing slight declines in hospitalizations, there are still huge increases in cases.

Houston Mayor Sylvester Turner said that allowing children to return to school next month would be difficult with the rising number of positive cases. Houston Independent School District is the state’s largest school system, with about 210,000 students, according to the latest information provided by the district.

Note: These numbers were released by Harris County Public Health and may not line up exactly in real time with CNN’s database drawn from Johns Hopkins University and the Covid Tracking Project.

Guidelines from the US Centers for Disease Control and Prevention on education and childcare during the coronavirus pandemic were put out with the intent to help schools reopen this fall, CDC Director Dr. Robert Redfield said during a phone call with reporters on Friday.

"Recently, we issued our overall guidelines for reopening schools and what this is a series of additional resource documents and consideration documents to really help put some more granular detail to how administrators and parents can begin to think about operating and putting those guidelines into a practice plan," Redfield said.

The CDC director continued: "They’re all put out with the intent to help facilitate, as was mentioned earlier, the reopening of schools for face-to-face learning. They’re not really put out there to be a rationale to somehow keep schools closed. But again, we're prepared to work with each jurisdiction."

France and Germany have announced that they will introduce coronavirus testing on arrival for passengers traveling from high-risk countries, including the United States, with a mandatory 14-day quarantine period for those who test positive.

Speaking during a visit to Charles de Gaulle Airport in Paris on Friday, French Prime Minister Jean Castex confirmed a list of 16 “red” countries whose travelers will be subjected to "systematic" testing upon arrival.

While France's borders to these countries remain closed, as previously announced by the French government, the new testing policy will apply to French nationals who reside in "red" zone countries and are permitted to return to France or foreign nationals who have a “stable” residence in France.

Travelers who test positive on arrival in France will be subjected to a 14-day quarantine "until their situation is back to normal," the prime minister added, telling reporters that the new policy is expected to be enforced in “the next few days.”

Germany also introduced a new voluntary testing policy for travelers arriving from high-risk countries, with those declining to take the test required to self-isolate for 14 days.

''All people returning from high-risk countries to Germany are obliged to go into 14-day quarantine, and this quarantine can only be ended with a negative test result,” Berlin's Health Minister, Dilek Kalayci, told reporters.

“We also decided that people returning from high-risk countries should be tested,” Kalayci continued. The cost of the tests will also be covered by the German authorities, the health minister said.

"The current infection figures show once again that we are still in the middle of the coronavirus pandemic, and increasing travel increases the risk of more infections being brought back into Germany,” Kalyci added.

Covid-19 can be a prolonged illness, even among young adults without underlying chronic medical conditions, the US Centers for Disease Control and Prevention reported Friday.

Thirty-five percent of those surveyed by the agency said they still weren’t back to their usual good health even two to three weeks after testing positive for coronavirus.

The CDC had survey results from 292 people who had a positive test for Covid-19 and were treated as outpatients from April 15 until June 25. The interviews were done 14 to 21 days after people were originally tested. The results were reported in the CDC’s Morbidity and Mortality Weekly Report on Friday.

Of those surveyed, 94% said they had at least one symptom when they went in for a Covid-19 test. People reported having a median number of seven of the 17 symptoms listed by the CDC. Fatigue was the most common complaint, followed by cough and a headache.

For the people whose symptoms lingered, 43% said they had a cough, 35% said they felt tired, and 29% said they were short of breath. The median time they had been interviewed was 16 days from when they tested positive.

Sixty-five percent of those surveyed said they had returned to their usual state of health between five and 12 days after they had a positive Covid-19 test.

The more chronic conditions someone had, the more likely it was that they still had lingering symptoms. But even 1 in 5 younger people ages 18 to 34 who had no chronic medical conditions said they had not fully recovered.

The authors argue that public health leaders should remind people who may not take Covid-19 seriously that even younger, healthier adults who get a milder form of the disease can have symptoms for weeks.

People need to take precautions, the CDC said, and frequently wash their hands, wear a mask in public and keep physical distance from others to slow the spread of Covid-19.

A Covid-19 likely won't be "widely available" to people in the US until "several months” into next year, Dr. Anthony Fauci, the director of the National Institute of Allergy and Infectious Diseases, said Friday.

“I think as we get into 2021, several months in, that you would have [a] vaccine that would be widely available to people in the United States,” Fauci told the Washington Post’s Robert Costa during a Post Live event.

It is a clear acknowledgement that although the federal government hopes at least one experimental vaccine candidate would be proven to safely protect people against coronavirus before the end of this year, it would take months to get through the approval process, manufactured and widely distributed.

"I think the key word there, Bob, is widely available,” Fauci said.

"I think we will likely know whether a vaccine is safe and effective given the number of Phase 3 trials that are starting literally next week,” Fauci added. “And there are some in other countries that are already ongoing — that we should know by the end of December of this year, the beginning of next year."

Fauci noted that some companies have claimed they could have a vaccine available before the end of the year. “There are some companies that claim that might be a month or two sooner. I'm a little skeptical about that, but, you know, anything is possible,” he said.

"It is likely that in the beginning of next year we would have tens of millions of doses available," he added. "The companies who are involved in making these vaccines, many of which the federal government is in deep collaboration with, promised that as we get into 2021, there will be hundreds of millions of doses. And then maybe sometime thereafter billions of doses,” Fauci continued. 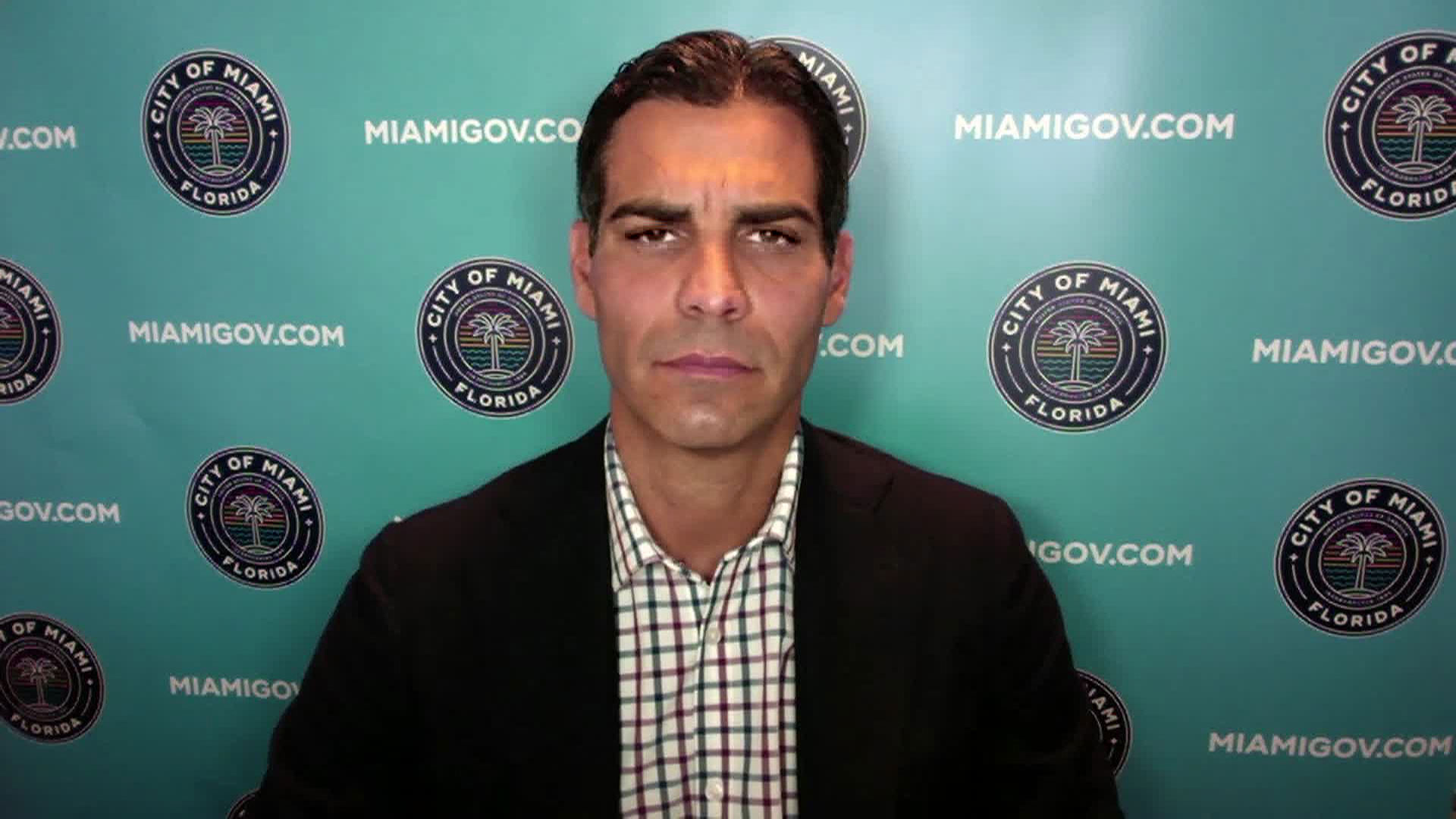 Miami Mayor Francis Suarez is hesitant about reopening schools, as coronavirus continues to spread in Florida.

“I don't know how much improvement we can make within two to four weeks, to be honest with you, and I don't think it looks good for day one opening right now,” he said in an interview with CNN’s Poppy Harlow.

The city is working with parents and teachers on the decision to offer in-person, blended or all-remote learning. Miami-Dade County Public Schools cannot offer in-person instruction until the region enters phase two.

“You're talking about 350,000 students plus another 40,000 teachers, so you're putting a tremendous amount of people back into the economy in a way that could end up being a super-spreader event,” Suarez said.

Researchers in South Korea have found that children between the ages of 10 and 19 can transmit Covid-19 within a household just as much as adults, according to new research published in a Centers for Disease Control and Prevention journal.

“I don't see how throwing 400,000 people into the mix, children and adults, is going to help us right now,” Suarez said.