The state of Florida is reporting 8,892 new cases of Covid-19 and 77 more deaths today, according to data released by the Florida Department of Health.

This brings the state's total cases to at least 432,747, according to the state department of health. The statewide resident death toll is now at least 5,931.

A look at the latest numbers:

“It's all about how to keep our economy going but do it safely, and to try to be innovative and creative,” he told CNN. “As we have allowed restaurants to move out into the sidewalk and to the streets, parking lots, the same thing with gyms and other businesses. It's about a lifeline that can keep folks employed, to keep businesses operating safely and try to do everything we can to obviously work through this pandemic.”

Faulconer added that San Diego has seen its cases beginning to flatten over last week, however, they need more tests.

As the $600 in federal unemployment benefits expire this week, the mayor said it is important for mayors to “provide the opportunity for businesses to be innovative and creative and do things they normally hadn’t done outdoors” to get people employed.

In response to Rep. Karen Bass’ claim that California reopened too quickly, Faulconer emphasized on a local approach.

“We're a big state, and one of the things we've been advocating is follow what's happening on the local level with our local county public health officials,” he said. “You reopen safely but you do it based upon the facts on the ground locally.”

The number of coronavirus cases among members of the US military increased by 1,647 over the weekend, an increase of nearly 7% from Friday's data.

There are currently 25,590 active cases among US military personnel.

The number of military cases currently requiring hospitalization remains relatively low, at 465, an increase of nine from Friday.

New York City Mayor Bill de Blasio is calling for courts to reopen across the city, the mayor said Monday during his daily Covid-19 news conference.

The mayor said coronavirus has allowed for an uptick in crimes and it is time to restart all pieces of the justice system.

“We are all in this together,” de Blasio said, but now is the time to come together and rebuild, it’s a massive backlog when it comes to dealing with violent crimes, he said.

Many states and communities began loosening coronavirus pandemic restrictions in the late spring and early summer — but as cases surge across the US, there are calls for a second lockdown.

More than 150 prominent medical experts, scientists, teachers, nurses and other experts have signed a letter urging leaders to shut the country down and start over to contain the rampant spread of the virus.

"The best thing for the nation is not to reopen as quickly as possible, it's to save as many lives as possible," they wrote in the letter, which was sent last week to the Trump administration, leading members of Congress and state governors.

The letter came just after an unpublished document prepared for the White House coronavirus task force recommended that 18 states in the coronavirus "red zone" for cases should roll back reopening measures amid surging cases.

And Dr. Anthony Fauci said earlier this month that some states reopened too quickly, allowing the coronavirus pandemic to come roaring back,

"There are some times when despite the guidelines and the recommendations to open up carefully and prudently, some states skipped over those and just opened up too quickly," Fauci said.

How we got here: Georgia was among the first states to reopen, allowing hair and nail salons, gyms, bowling alleys, tattoo studios and massage therapists to reopen their doors in late April. Around the same time, some businesses in Alaska and Oklahoma were allowed to reopen.

By mid-May, all 50 states were at least somewhere along the road to a full reopening. But even as more communities loosened their coronavirus restrictions, experts warned that the effects of those reopenings wouldn't be clear for weeks.

New York City continues to meet the threshold to keep the city open and has dropped the city’s infection rate to 1%, Mayor Bill de Blasio said.

One thing to note: The numbers listed were released by New York City Mayor Bill de Blasio’s office and may not line up exactly in real time with CNN’s database drawn from Johns Hopkins University and the Covid Tracking Project.

As the first Phase 3 clinical trial of a Covid-19 vaccine in the United States is underway, Dr. Anthony Fauci, the nation's top infectious disease expert, said there will be dozens of sites nationwide where volunteers will be participating in the study.

"There are 89 sites distributed throughout the country," Fauci said during during a phone call with reporters on Monday.

"They are widely distributed as a matter of fact in areas where there is clearly as of right now active infection going on," Fauci said. "I think we are going to get a good sampling of the activity of virus transmission that's currently going on in the country."

More on the trial: At least 30,000 adult volunteers are expected in the Phase 3 trial. The first patient was dosed at a site in Savannah, Georgia, on Monday.

The investigational vaccine was developed by the biotechnology company Moderna and NIAID, part of the National Institutes of Health.

Fauci said during the call that the launch of the Phase 3 trial marks a "truly historic event in the history of vaccinology."

Dr. Mike Ryan, executive director of the World Health Organization's health emergencies program, said governments that react quickly and are honest about their countries’ Covid-19 situations should be praised.

“The real judge and test of a country’s capacity and resolve is how quickly and how comprehensively does each country respond to those signals that the disease is back,” he said at a press briefing on Monday in Geneva.

“I think both Australia and Japan deserve a lot of praise for the way in which they’re trying to contain the disease sub-national or at community level,” Ryan added.

The WHO official said that what countries are really trying to do is “ensure that small numbers of cases and clusters don’t reignite sustained and efficient community transmission.”

Governments should be praised, Ryan said, when they pick up on these clusters of cases and when they react quickly and demonstrate that they’re taking responsibility and communicating transparently.

“We should refrain, I would hope, from overly criticizing governments who are actively seeking cases, actively doing surveillance, doing contact tracing, they’re trying to uncover the problem,” he said. “They’re trying to surface the issues and deal with the issues.”

Ryan said that situations that should worry people are those where problems aren’t being surfaced, or are being glossed over, where everything looks good.

“Because one thing is for sure with Covid, as it is with every infectious disease,” he said. “Just looking good does not mean things are good.”

Ryan said that he would rather being in a situation with a government that is “honest and truthful about the situation on the ground,” that communicates what is happening and demonstrates that it can take action and react quickly.

Florida has broken its record of new cases several times in recent weeks. Here's what we know about the pandemic in the Sunshine State:

Here's where each county stands on coronavirus cases: 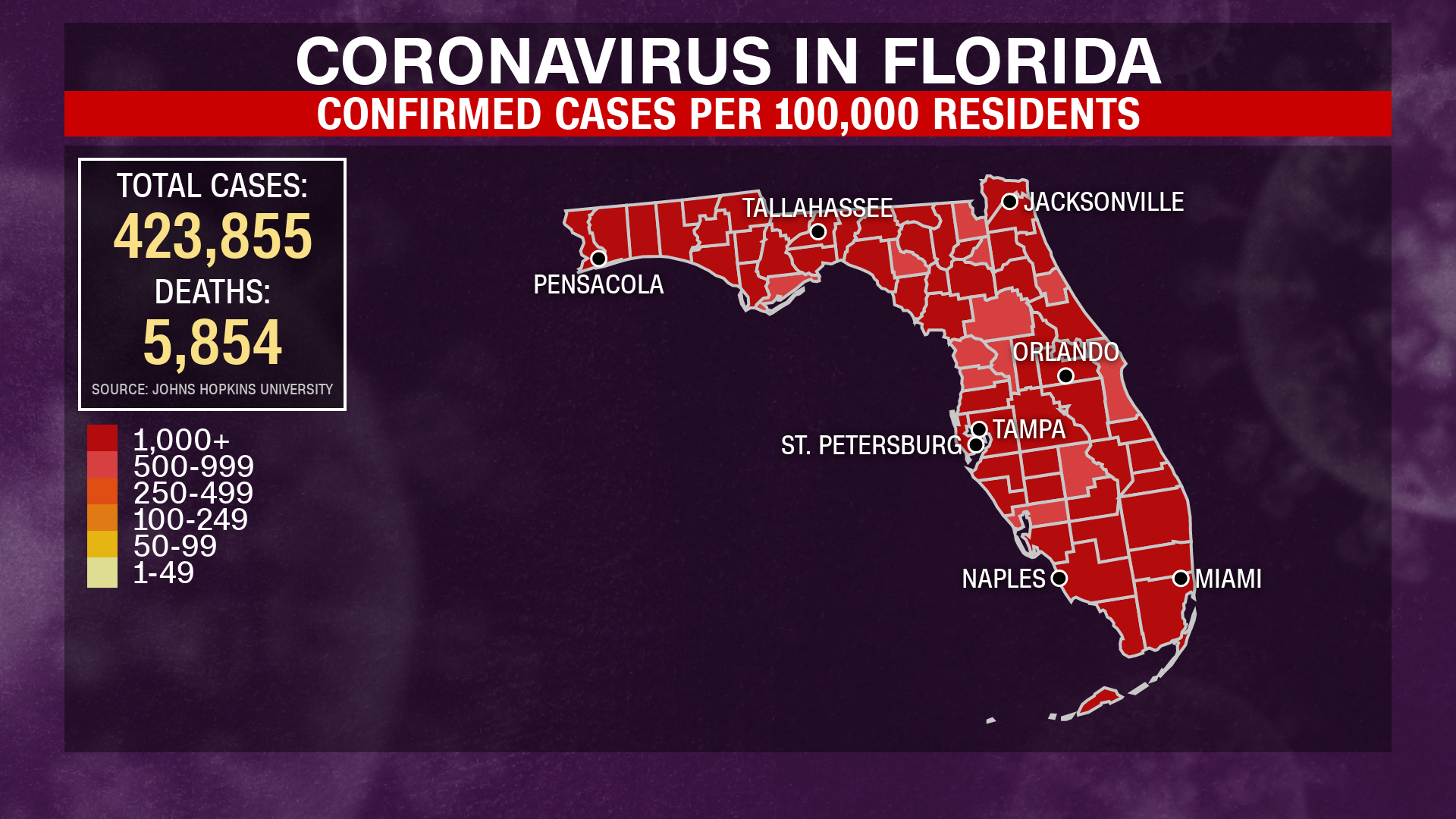