“This is the sixth time a global health emergency has been declared under the International Health Regulations,” Tedros said during a briefing on Monday. “But it’s easily the most severe.”

Previous health emergencies of this level of concern have included Ebola, Zika and H1N1. Tedros said that nearly 16 million cases and more than 640,000 deaths worldwide have been reported to WHO.

“And the pandemic continues to accelerate,” he said. “In the past six weeks, the total number of cases has roughly doubled.”

Tedros said that he will reconvene WHO’s emergency committee, as required under International Health Regulations, later in the week to re-evaluate the pandemic.

He said that he was very proud of WHO, its people and their efforts, as they have “worked tirelessly to support countries to prepare for and respond to this virus” over the last six months.

And there is still work to be done, Tedros said.

“We have done an incredible amount, but we still have a long, hard road ahead of us,” Tedros said.

The coronavirus pandemic has shown what humans are capable of, both in a positive and negative way, Tedros Adhanom Ghebreyesus, director-general of the World Health Organization, said Monday at a press briefing in Geneva.

“Covid-19 has changed our world. It has brought people, communities and nations together, and driven them apart,” he said. “It has shown what humans are capable of, both positively and negatively.”

Tedros said that “we have learned an enormous amount, and we’re still learning.”

Although the world has changed, he said, the way to respond to Covid-19 and the basic measures to suppress transmission have not.

These are political leadership and informing, engaging and listening, as well as wearing a mask where recommended, Tedros said.

“Where these measures are followed, cases go down,” he said. “Where they’re not, cases go up.”

He gave examples of places that followed this advice “carefully and consistently” and were able to either prevent a large-scale outbreak, such as New Zealand, or bring large outbreaks under control, such as Germany.

The first Phase 3 clinical trial of a coronavirus vaccine in the United States began Monday.

The investigational vaccine was developed by the biotechnology company Moderna and the National Institute of Allergy and Infectious Diseases, part of the National Institutes of Health. The trial is to be conducted at nearly 100 US research sites, according to Moderna. The first patient was dosed at a site in Savannah, Georgia.

The trial is expected to enroll about 30,000 adult volunteers and evaluates the safety of the Moderna/NIH vaccine and whether it can prevent symptomatic Covid-19 after two doses, among other outcomes. Volunteers will receive either two 100 microgram injections of the vaccine or a placebo about 28 days apart. Investigators and participants will not know who has received the vaccine.

Phase 1 results found immune responses: Results from a Phase 1 trial of the vaccine published earlier this month in the New England Journal of Medicine found it induced immune responses in all of the volunteers and was generally safe. It had mild side effects, including fatigue, chills, headache, muscle pain, pain at the injection site.

A Phase 1 study typically studies a small number of people and focuses on whether a vaccine is safe and elicits an immune response. In Phase 2, the clinical study is expanded and the vaccine is given to people who have characteristics -- such as age and physical health -- similar to those for whom the new vaccine is intended, according to the US Centers for Disease Control and Prevention. In Phase 3, the vaccine is given to thousands of people and tested for efficacy and again for safety.

The Moderna/NIH vaccine is one of 25 in clinical trials around the world, according to the World Health Organization.

Moderna is one of several companies that received support from Operation Warp Speed, the federal government’s Covid-19 vaccine program. On Sunday, Moderna announced it had received an additional $472 million from the Biomedical Advanced Research and Development Authority for Phase 3 study and development of its Covid-19 vaccine, bringing the total to $955 million.

More than 16.2 million cases of the novel coronavirus have been recorded worldwide, including at least 648,000 deaths, according to Johns Hopkins University.

Here's the latest from around the globe:

First Phase 3 vaccine trial in US starts: The first Phase 3 clinical trial of a coronavirus vaccine in the United States -- an investigational vaccine developed by the biotechnology company Moderna and the National Institute of Allergy and Infectious Diseases -- began Monday. The trial, one of 25 clinical trials around the world, is expected to enroll about 30,000 adult volunteers and evaluates its safety and whether it can prevent symptomatic Covid-19 after two doses, among other outcomes.

Vietnam announces evacuation: Around 80,000 tourists in the Vietnamese city of Da Nang will be evacuated after three residents from the popular tourist destination tested positive for the coronavirus, according to state-run media. It will take at least four days to evacuate all 80,000 tourists -- mostly domestic travelers -- from the central coastal city.

After U-turning on Spain, UK monitors Germany and France travel bridges: The UK government is monitoring the coronavirus situation in Germany and France “closely” as it reviews the travel bridges to popular holiday destinations, a junior health minister said Monday. The UK government unexpectedly announced on Saturday that all people returning from Spain would be required to self-isolate for two weeks, reversing its previous stance with immediate effect.

India reports nearly 50,000 daily cases: India recorded its highest single-day jump of 49,931 new cases of Covid-19 on Sunday, its health ministry said Monday. The leap in cases came as Indian Prime Minister Narendra Modi claimed in a national address that his country's response to the pandemic has defied global expectations -- despite having the third highest case count in the world.

Australian state has its worst day of pandemic so far: The Australian state of Victoria recorded 532 new coronavirus cases Sunday, marking the nation's worst day of the pandemic so far, said Victoria Premier Daniel Andrews on Monday. Victoria has seen high case numbers persist for weeks, despite metropolitan Melbourne and neighboring Mitchell Shire being halfway through a six-week-long lockdown order.

China reports highest number of local infections since March: China recorded 57 local Covid-19 cases on Sunday, the highest number the country has seen since it brought the coronavirus largely under control in March, according to figures released by the National Health Commission Monday.

Hong Kong makes mask wearing compulsory outdoors: In Hong Kong, mask wearing will be compulsory in all indoor and outdoor public spaces from Wednesday midnight to August 4, authorities announced on Monday, with failure to comply resulting in a fine up to HKD 5,000 ($645).

The move comes amid a raft of new social restrictions as the city struggles to contain its third wave of Covid-19 infections. On Sunday, the city recorded its fifth straight day of over 100 local cases.

In the corner of a Covid-19 ward in Sao Paulo, Brazil, a woman cleaning the mouth of an intubated patient carries an extraordinary hope for pretty much all of us. Slipping a mouthwash-soaked brush into an elderly woman's mouth, at great personal daily risk, dentist Denise Abranches has something more than courage in her veins.

Abranches was the first of an expected 5,000 Brazilian key workers in the healthcare system to receive a trial coronavirus vaccine from Oxford University and multinational drugmaker AstraZeneca, along with volunteers in the UK and South Africa.

Across the city, frontline medics like her have enrolled in a Phase 3 test of the vaccine's efficacy as they battle the pandemic, which has infected more than 2 million Brazilians. And it isn't just Oxford testing its vaccine in this vast human petri dish. Chinese firm Sinovac began trials last week in Sao Paulo, and US pharma giant Pfizer plans to do so soon, bringing a race among powers to prove their vaccine works first.

Yet while nations fret over securing access to a vaccine, the potential geopolitical implications mean nothing in this ward.

To volunteer is an act of love, to donate a little of yourself to people," said Abranches.

Like many healthcare workers, she has been separated from her family for months of Brazil's pandemic, in order to avoid spreading the virus, and often failed to hold back her tears when asked about the loved ones she missed. 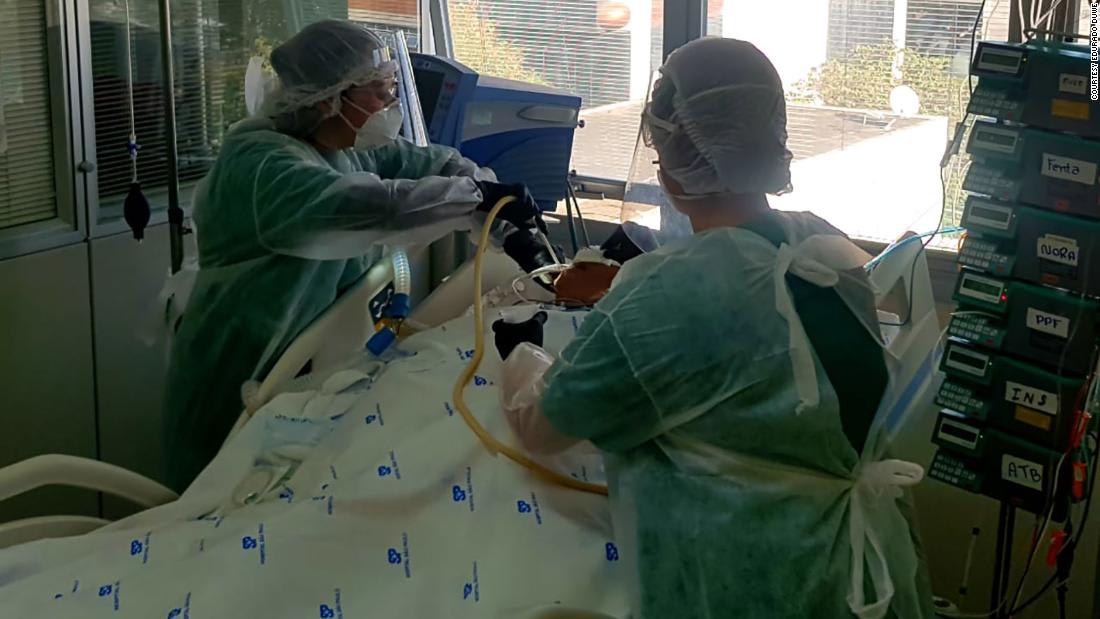 Boris Johnson, the UK Prime Minister, has said in a video posted to his official Twitter account that he was "way overweight" when he was admitted to intensive care earlier this year after becoming infected with Covid-19.

"I've always wanted to lose weight for ages and ages," he said in the clip posted Monday. "I think many people, I struggle with my weight."

Johnson says in the video that since recovering from the virus, he starts each day by going for a run with his dog, Dilyn, and talks effusively about the personal benefits of losing weight as well as the societal benefits of protecting the UK's National Health Service (NHS).

The video has been released alongside the launch of the UK government's strategy to lower obesity rates in the country. According to government figures, 63% of adults are above what would be considered a healthy weight, with around half of those people being obese.

Equally alarming is the fact that one in five children aged 10-11 are living with obesity, with children living in deprived areas twice as likely to be obese.

Singapore reported 469 new coronavirus cases on Monday, bringing the total number of confirmed infections in the city-state to 50,838, according to its health ministry.

The vast majority of new cases are work permit holders residing in foreign workers' dormitories, the ministry said. It added that at least two of the new infections were found in the community, including one Singaporean and one work pass holder.

In addition, Singapore reported a further 15 imported cases, all of which were placed under Stay-Home Notices upon arrival.

Gold prices have soared to a record high, with investors rushing to find safe places to park their money as concerns grow about a resurgence in the coronavirus and the impact that could have on the global economy.

The main driver behind gold's rally has been falling returns on US government bonds, which reflect the likelihood that the Federal Reserve will have to keep interest rates lower for a prolonged period of time to support the economic recovery, according to Hussein Sayed, chief market strategist at FXTM.

That has also served to weaken the US dollar, which is trading at a 22-month low of 0.85 euros and a 4-month low against the Japanese yen, Sayed said in a research note Monday.

Hong Kong reported a record 145 novel coronavirus cases on Sunday, health officials announced Monday, as China’s central government said it would help the city build a makeshift hospital to deal with the surge in cases.

Hong Kong has seen six days in a row of local cases over 100. Additional social restrictions announced Monday include compulsory mask wearing in all indoor and outdoor public spaces, limits of two people to a group for public gatherings, and no dining-in at restaurants.

“The country [China] has agreed to help build a 'Fang-cang' hospital in the Asia Expo Airport next to the airport within a short period of time. it is expected to be able to provide at most 2,000 hospital beds when finished," said Cheung.