Google will extend its work-from-home stance until at least July 2021, according to a person familiar with the matter.

The company had previously said most employees will be working remotely through the end of 2020, with some employees being allowed back into the office sooner.

But the decision to extend the remote work policy well into next year indicates that one of the world’s largest tech companies is bracing for a long pandemic — and could prompt other businesses to follow suit.

"In an email to employees,” the spokesman said, "Google CEO Sundar Pichai wrote that 'To give employees the ability to plan ahead, we are extending our global voluntary work from home option through June 30, 2021 for roles that don’t need to be in the office.’”

The memo was independently obtained by CNN.

Vietnam reported 11 new locally transmitted cases of Covid-19 on Monday evening, all of which are linked to a hospital in the tourist city of Da Nang, according to Chinhphu, the official state-run newspaper of the Vietnamese government.

Of the 11 new cases, four are health care workers, according to Chinphu.

Da Nang, a popular resort city in Vietnam, has seen a recent increase in coronavirus cases since July 25 when a local man tested positive for the virus. Prior to that, Vietnam had gone 100 days without recording a single locally transmitted infection.

The recently confirmed cases led Vietnam's Prime Minister Nguyen Xuan Phuc to demand that contact tracing be ramped up and large-scale testing conducted across the city.

Around 80,000 tourists – mostly domestic travelers – in Da Nang with be evacuated over four days due to the latest outbreak.

The state-run media outlet added that the country’s Ministry of Health has sent experts to Da Nang to help the city find the source of the infection and contain the outbreak.

The 11 new cases brings the total number of cases in Vietnam to 431. The death toll remains at zero.

Target is rolling out a series of changes for the holiday season to ensure more safe shopping for customers, including closing stores on Thanksgiving day and starting sale pricing earlier in the season.

Both changes are designed to reduce a crush of people crowding stores and trying to score deals, according to a company announcement.

“Our biggest holiday deals will be available earlier than ever, so you can shop safely and conveniently without worrying about missing out on deals that usually come later in the season,” Target said in a release on Monday.

Target is telling customers not to worry about the Thanksgiving closure.

Shoppers can “count on getting extra-big savings without the extra-long lines, with plenty of opportunities to score the best deals on the hottest items both before and after November 26.”

President Trump's national security adviser, Robert O'Brien, has tested positive for coronavirus, according to another official familiar with what happened.

O'Brien, one of Trump's top aides, recently returned from Europe where he and his top deputy met with officials from the U.K., France, Germany and Italy.

The White House declined to immediately comment. It's still unclear if any other officials he came into contact with will also have to quarantine.

White House negotiators and the staff of Senate Majority Leader Mitch McConnell spent the weekend working through a series of issues with the broader GOP stimulus proposal, and the expectation is the plan will finally be rolled out Monday afternoon, according to sources and White House chief of staff Mark Meadows.

That proposal will represent the opening GOP offer, one Democrats have been waiting months for after passing their own $3 trillion proposal in the House in May.

It will include $105 billion for schools, another round of direct payments to families and individuals, a second, more targeted round of forgivable small business loans, tax incentives for re-hiring and retro-fitting workplaces to address coronavirus concerns and broad liability protections for companies, schools, hospitals and non-profits.

McConnell planned to release the proposal last week, but administration officials raised a series of technical, and at times, according to people involved, extraneous, issues that delayed the process and dragged talks throughout the weekend.

The largest holdup has centered on the GOP proposal to address the expiring $600 federal unemployment benefit. Administration officials and congressional staff have been going back and forth on the technical mechanics of implementing a scaled-back version of the benefit for days, all as they attempt to make it equate to roughly 70% of a worker's wages, as opposed to the current flat rate.

Several countries in the Middle East have moved to reimpose restrictions and lockdown measures ahead of the upcoming Eid al-Adha holiday, as reported coronavirus cases increase in some nations, health ministries and state media have said.

Morocco has banned travel to and from several cities on Sunday, including major cities like Casablanca, Tangier and Marrakech, a joint statement by the Ministries of Interior and Health said according to state-run Agence Marocaine De Presse (MAP). The country recorded 633 cases on Sunday, bringing the total number of recorded cases over 20,000 and 313 deaths

“This decision was taken in view of the failure of the majority of citizens to comply with preventive measures, namely social distancing, the wearing of masks and the use of disinfectants, despite their availability in large quantities on the markets, leading to the spread of infection and an increase in confirmed cases,” the statement said according to MAP.

In Algeria, the government decided to ban the use of private vehicles in 29 provinces while extending curfew for another 15 days, starting Tuesday, Radio Algerie said on their website quoting the Prime Minister.

Algeria has been recording more than 500 cases daily since mid-July, bringing the total number to over 27,000 with 1,155 deaths, according to Johns Hopkins University.

Last week, the Oman government announced that the country will go into a "complete lockdown of all governorates of the Sultanate" from July 25 until August 8, after a rise in the number of Covid-19 cases, according to Oman's News Agency.

Oman has one of the highest number of cases per 100,000 people, according to data collected from Johns Hopkins.

In Lebanon, a decision to reimpose lockdown has not been taken yet, however the Lebanese minister of Public health Hamad Hassan said on Monday that he recommends “a total lockdown of the country for two weeks, except for the airport” according to the Lebanese National News Agency (NNA).

Iraq will also impose a 10-day curfew starting on Eid al-Adha and implement a series of measures to contain the coronavirus outbreak in Iraq, the country’s Supreme Committee for Health and National Safety, headed by Prime Minister Mustafa al-Kadhimi, announced Sunday.

In addition to an increase in cases, countries are moving to reimpose restrictions in anticipation of Muslims celebrating the upcoming holiday Eid al-Adha, which is expected to start Thursday. The celebrations include prayers, family visits and intercity travels.

With a continuing upward trend, California is leading the country with the highest number of total infections — more than 452,280 — followed by Florida, New York and Texas.

At least 36 counties are on California's watch list and have been ordered to close many of their indoor operations.

More than 8,100 deaths across the state have so far been linked to the virus and at least 6,912 people are hospitalized, with 1,993 people in ICUs.

Health officials said that the state's positivity rate, a key indicator in how fast the virus is spreading within a community, is on the rise. That positivity rate — the number of people testing positive compared to how many are getting tested — is at about 7.5%, according to state data.

For comparison, New York has brought its rate down to about 1%, a statistic the governor touted as "really great, great news." Meanwhile in Florida, Miami-Dade County's positivity rate is at about 18%, according to county data.

Here's a look at how California's Covid-19 cases compare to other states: 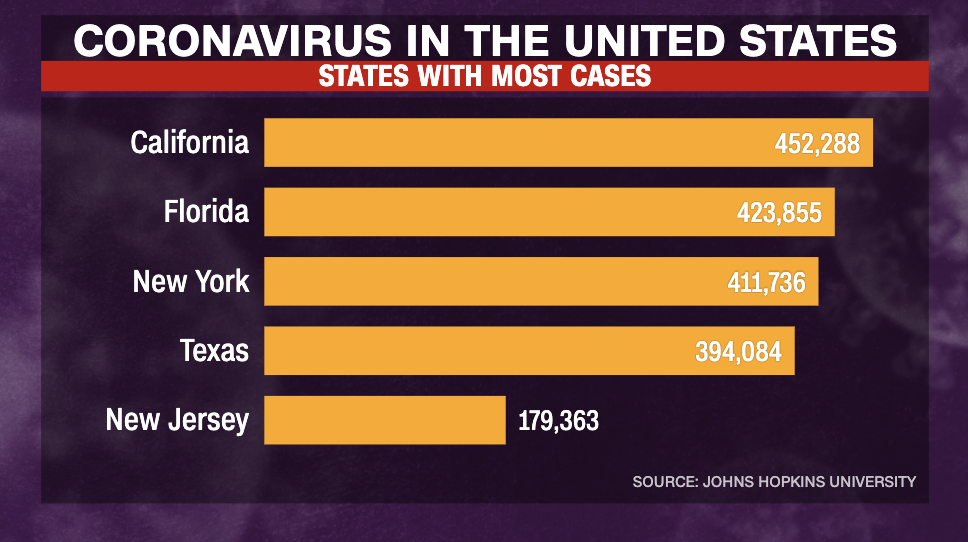 More than 150 prominent medical experts, scientists, teachers, nurses and other experts have signed a letter urging leaders to shut the country down and start over to contain the rampant spread of the virus.

"The best thing for the nation is not to reopen as quickly as possible, it's to save as many lives as possible," they wrote in the letter, which was sent last week to the Trump administration, leading members of Congress and state governors.

The state of the pandemic in the US: More than 1,000 people died every day for four straight days last week due to Covid-19, according to data from Johns Hopkins University.

In Florida, 46 hospitals have reached ICU capacity and show zero ICU beds available, according to data released by the Agency for Health Care Administration (AHCA).

Behind California, Florida has the second-highest number of coronavirus cases, passing New York, once the country's epicenter early in the pandemic.

Nine of the hospitals at capacity are in Miami-Dade County and six of them are in Broward County, AHCA data shows.

Another 30 hospitals have 10% or less ICU capacity available, according to AHCA.

AHCA reports about 18% ICU beds are available across the State of Florida.

Here's what else you need to know about the coronavirus pandemic in Florida:

Here's a look at how Florida's Covid-19 cases compare to other states: 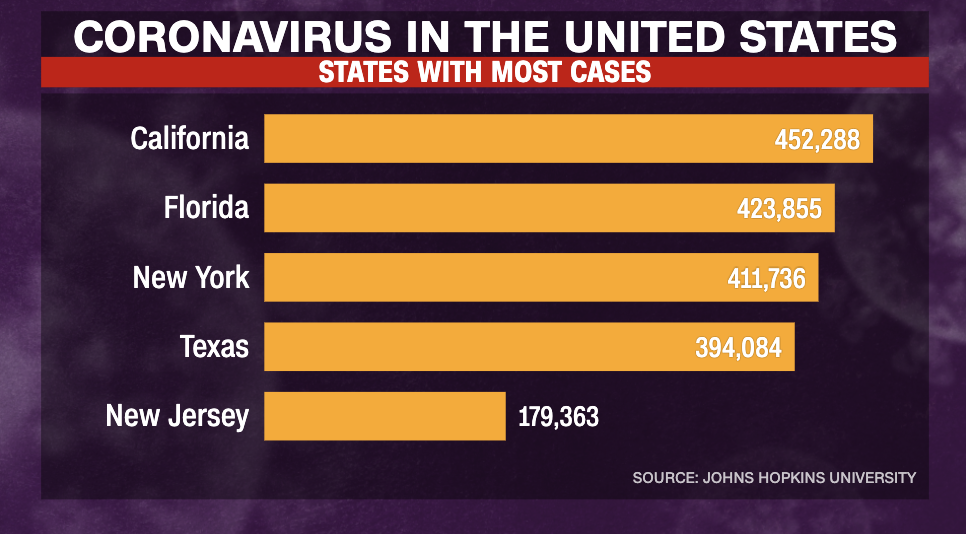