Looking back on the Southern states that have already experienced resurgences, Fauci said, there was an increase in the percent positive of tests being done, which is “surefire indication that you are in a process where you’re heading towards a resurgence.”

He said that they were starting to see that in some states now, such as Kentucky, Tennessee, Ohio and Indiana.

Fauci added that he and other members of the White House coronavirus task force made the point on the weekly call with governors that “it is very important to get ahead of the curve, because what we are seeing now it what actually took place a couple of weeks ago.”

“If we don’t start initiating rather strict adherence to the five principles I just mentioned,” Fauci said, “what inevitably is going to happen is that the states that are not yet in trouble will likely get into trouble."

“If you’re not getting your arms around and suppressing that surge that’s coming up, that’s just a little bit below the radar screen, before you know it, two to three weeks down the pike, you’re in trouble," he added.

Rhode Island Gov. Gina Raimondo said her state "cannot move forward to phase four" due to the spread of coronavirus from parties.

She said contacting tracing shows "we're partying too much, social gatherings are too large," during a weekly coronavirus briefing on Wednesday.

Raimondo announced Rhode Island will remain in phase three for another month, with a change; social gathering limits will be lowered from 25 to 15 people.

"We have cases traced back to a house party, with more than 50 people, and no one wearing a mask," she said.

The governor's listing of other gatherings with Covid-19 cases included a baby shower, several a large birthday parties and pool parties.

"In each of these instances, the patterns are exactly the same, people who know each other, friends and family, more than 25 people, not wearing masks, in close contact for hours," Raimondo said. There have been up to seven to 10 cases found for each of the parties, in some cases, she said.

Raimondo pleaded for residents "to knock it off, because people are getting sick people are dying, and it's unnecessary." 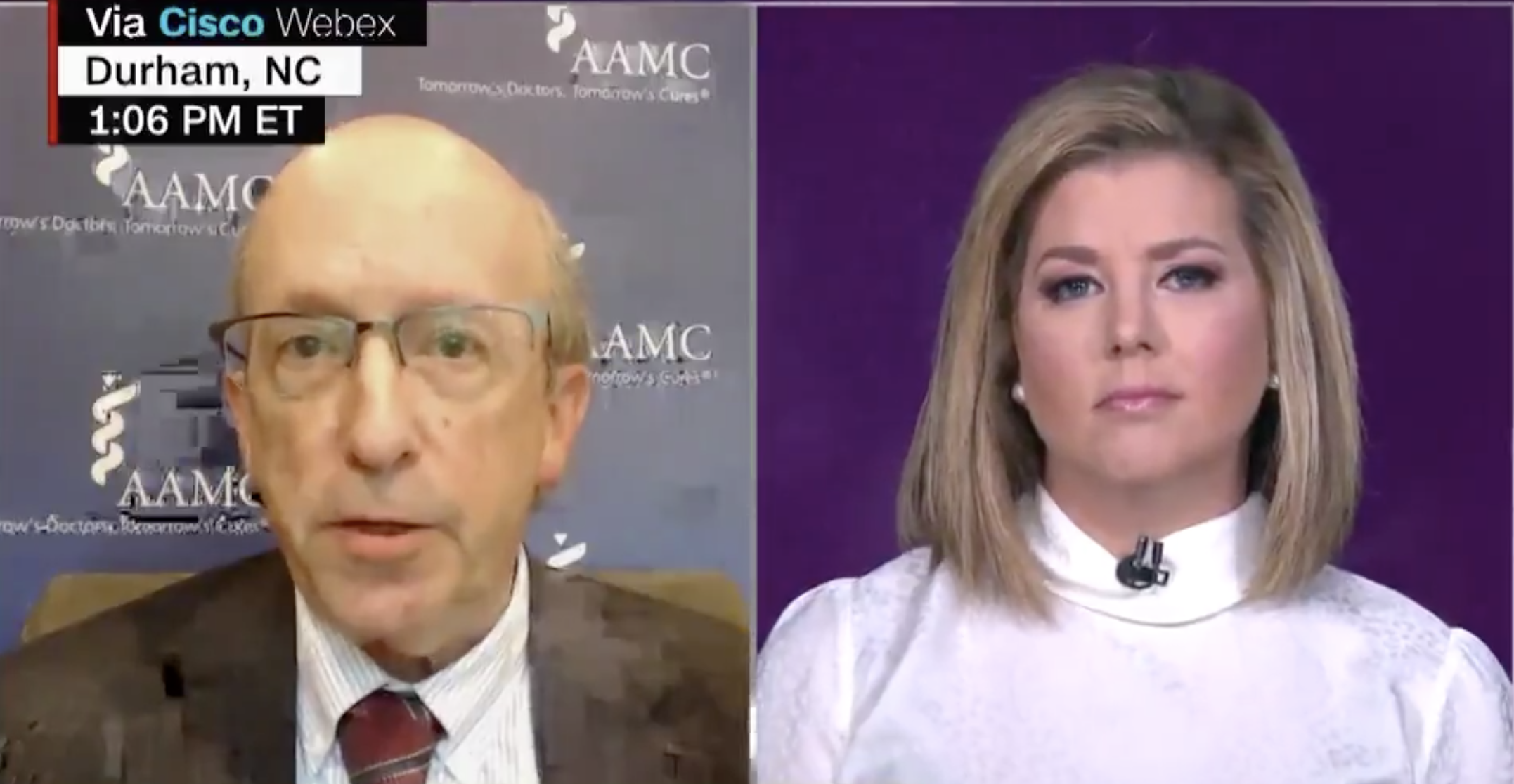 The US could see coronavirus related deaths skyrocket “well into the multiple hundreds of thousands” if there is not a course correction, according to a warning from the Association of American Medical Colleges.

McKinney also said that the crisis is putting a strain on hospitals, especially those in virus hotspots like Arizona, Florida and Texas.

“The crisis is terrible for hospitals. We’re hearing, some of our hospitals in areas like southern Florida, that in fact, they’re full, but their staff is getting sick. As their staff gets sick, there’s nobody there to be able to fill in. So, people are having to work extraordinarily long hours and as you get more tired you end up taking more risks, just because you make mistakes. So we are really, pushing at the limits of what are health system can deliver… We are really hitting at the limit and as disease hits the staff it’s becoming even more of a crisis than it already was,” he said.

The AAMC is calling for an increase in critical supplies, as well as improving testing, reopening schools safely, expanding health insurance and developing a vaccination distribution protocol.

The association is urging the Trump administration to invoke the Defense Production Act to address supply shortages.

McKinney added, that the AAMC is calling for national standards for local stay-at-home orders and reopening protocols.

Each city or state “don’t necessarily have to have the same degree of lockdown, but they should use the same criteria to try and move from one phase to the next, so that we can learn what are the best standards to use, so we don’t get these continuous waves of infection,” he said.

The US Open Championship will be held without fans at Winged Foot Golf Club in Mamaroneck, New York, on Sept. 14 to 20, Gov. Andrew Cuomo announced Wednesday.

“It will be held without fans and the organizers are working with the state department of health to ensure everyone's safety," Cuomo said.

The United States Golf Association (USGA) will have protocols — like social distancing, the use of face coverings, cleaning and testing — in place to protect players and staff, a statement released by the governor’s office outlined.

"We are very grateful to Governor Cuomo and his team for their collaboration over the past few months. We are very proud to give our competitors and champions the opportunity to chase their dreams at the U.S. Open to Winged Foot Golf Club in September. While we will miss having fans on-site, we know this is the right decision to make for the players and the community," USGA CEO Mike Davis said in the governor's office statement.

Dr. Anthony Fauci, the director of the National Institute of Allergy and Infectious Diseases, said Wednesday "we've got to follow the science" when asked about a viral video that promoted false coronavirus claims.

The video included false claims about masks and hydroxychloroquine. Versions of it were shared by President Trump on Twitter.

Speaking during an interview on MSNBC, Fauci said that amid the spread of misinformation, it's important to "follow the science."

"I'm very explicit and unambiguous when we say we've got to follow the science. If a study that's a good study comes out and shows efficacy and safety for hydroxychloroquine or any other drug that we do — if you do it in the right way you accept the scientific data. But right now today, the cumulative scientific data that has been put together and done over a number of different studies has shown no efficacy," Fauci explained.

"When there's a video out there from a bunch of people spouting something that isn't true, the only recourse you have is to be very, very clear in presenting the scientific data that essentially contradicts that," Fauci told MSNBC's Andrea Mitchell.

"We don’t have the luxury of not getting our young people in school," she said during a news conference.

Students from second grade to college will now be required to wear masks or face coverings while in school under Ivey's amended safer-at-home order.

Approximately 22,000 of the total cases were confirmed in the last two weeks, Harris said.

There are at least 848 new Covid-19 cases in Oklahoma, according to the latest numbers provided by the state's Department of Health.

This brings the state’s total to 34,623 cases. The state had reported more than 1,000 cases the past three days.

There are 14 new deaths in the state, bringing the total to 523. However, the health department says that none of the new reported deaths occurred over the past 24 hours.

The health department also reported a total of 27,386 people have recovered from the virus while 663 people are currently hospitalized due to the virus.

Note: These numbers were provided by the Oklahoma State Department of Health and may not line up exactly in real time with CNN’s database drawn from Johns Hopkins University and the Covid Tracking Project.

There are 619 New Yorkers hospitalized, which is the lowest number since March 15, according to the governor.

Cuomo said there were unfortunately five deaths Tuesday from Covid-19 but overall, “all the news on numbers and our status is all very good.”

“The whole goal now is to protect our progress and we are doing very well, and we want to make sure we continue to do well, even though the sea around us is roiled,” the Governor said during a press call Wednesday.

The governor said they are focused and concerned about the national increase rate and the “inevitability that people get on planes and come here.”

On Tuesday, the state liquor authority issued 29 violations on bars and restaurants that were not “following the law," Cuomo said.

The 2020 US Open golf championship will take place without fans at Winged Foot Golf Club in Mamaroneck Sept. 14 through Sept. 20, according to the governor.

Vice President Mike Pence has arrived at Raleigh-Durham International Airport in North Carolina. He is expected to visit a fourth grade class in Apex at 12:50 p.m. ET and participate in a roundtable on reopening schools afterward.

Later, he will participate in a roundtable discussion on vaccines at the NC Biotechnology Center.