“This is the sixth time a global health emergency has been declared under the International Health Regulations,” Tedros said during a briefing on Monday. “But it’s easily the most severe.”

Previous health emergencies of this level of concern have included Ebola, Zika and H1N1. Tedros said that nearly 16 million coronavirus cases and more than 640,000 deaths worldwide have been reported to WHO.

“And the pandemic continues to accelerate,” he said. “In the past six weeks, the total number of cases has roughly doubled.”

Tedros said Monday that he will reconvene WHO’s emergency committee, as required under International Health Regulations, later in the week to re-evaluate the pandemic.

He said that he was very proud of WHO, its people and their efforts, as they have “worked tirelessly to support countries to prepare for and respond to this virus” over the last six months.

And there is still work to be done, Tedros said.

“We have done an incredible amount, but we still have a long, hard road ahead of us,” Tedros said.

Randi Weingarten, president of the American Federation of Teachers, said that the lack of a national plan around opening schools is making Americans “very scared” about the upcoming school year.

“There's national guidance about what can keep people safe, and frankly, if [the teachers union] could put it together in April, what has Betsy DeVos been doing?” she said in an interview on CNN’s “New Day.”

Education Secretary Betsy DeVos argued Wednesday against the need for a national plan on reopening schools.

While Weingarten said school reopenings do need to be done on a regional level, the Trump administration has “been reckless and dangerous in saying fully reopen or else.”

“What we need to do, like all of the other countries in the world have done, is that the government has to work together with people on the ground doing the essential work to make sure everyone is safe,” she said.

In yet another sign that the economic recovery is teetering in a resurgence of coronavirus cases, the number of Americans filing first-time unemployment claims rose for the second week in a row.

About 1.4 million people filed for initial jobless claims last week, up 12,000 from the prior week's revised level, which was the first increase in 16 weeks.

On an unadjusted basis, 1.2 million people filed first-time claims, down 171,000 from the week before. The seasonal adjustments are traditionally used to smooth out the data, but that has tended to have opposite effect during the pandemic.

Continued claims, which count workers who have filed for at least two weeks in a row, stood at 17 million for the week ending July 18, up 867,000 from the prior week's revised level.

These seasonally adjusted claims peaked in May at nearly 25 million.

The US economy contracted by 32.9% between April and June, its worst drop on record, the Bureau of Economic Analysis said Thursday.

Business ground to a halt during the pandemic lockdown in the spring of this year, and America plunged into its first recession in 11 years, putting an end to the longest economic expansion in US history.

A recession is commonly defined as two consecutive quarters of declining gross domestic product, the broadest measure of the economy.

Between January and March, the GDP declined by 5%.

But this is no ordinary recession. The combination of public health and economic crises is unprecedented, and numbers cannot fully convey the hardships millions of Americans are facing.

The pandemic pushed the economy off a cliff. The GDP drop was nearly four times worse than during the peak of the financial crisis, when GDP fell 8.4% in the fourth quarter of 2008.

Quarterly GDP numbers are expressed as an annualized rate. This means that the economy didn't actually contract by a third from the first quarter to the second. The annualized rate measures how much the economy would grow or shrink if conditions were to persist for 12 months. But by either measure, the second quarter is still the worst on record.

The US only began keeping quarterly GDP records in 1947, so it's difficult to compare the current downturn to the Great Depression. That said, in 1932 the US economy contracted 12.9%.

US Food and Drug Administration Commissioner Dr. Stephen Hahn said there is no evidence that people can contract Covid-19 from wearing masks, after a Republican congressman incorrectly suggested as much.

Rep. Louie Gohmert, who has frequently refused to wear a mask, tested positive for coronavirus yesterday. After his diagnosis, during an interview with KETK, he wondered if "by keeping a mask on and keeping it in place, that if I might have put some germs or some of the virus onto the mask and breathed it in.”

But during an interview on the “Today” show Thursday, Hahn said there is no "medical evidence that that's the case."

"What our data show is that people should wear masks, particularly when they can't socially distance. And they should follow their local ordinances with respect to masks," Hahn added.

When asked if it was frustrating to have a sitting congressman say he may have contracted the virus by wearing a face covering, Hahn said he was focusing on being consistent about common-sense public health measures, such as wearing a mask.

"I will continue to do that to make sure that people understand that we have the power. We have the power as American people to slow the spread of this virus. We've seen this virus spread in the US, but we've also seen it around the world. So we know it's with us. We have to take this seriously," Hahn told NBC's Savannah Guthrie.

Coronavirus cases in Texas have risen to more than 418,000, putting the state at a higher case count than New York.

Once the US epicenter of the pandemic, New York now ranks fourth in total case count behind California, Florida and Texas, according to data from Johns Hopkins University. 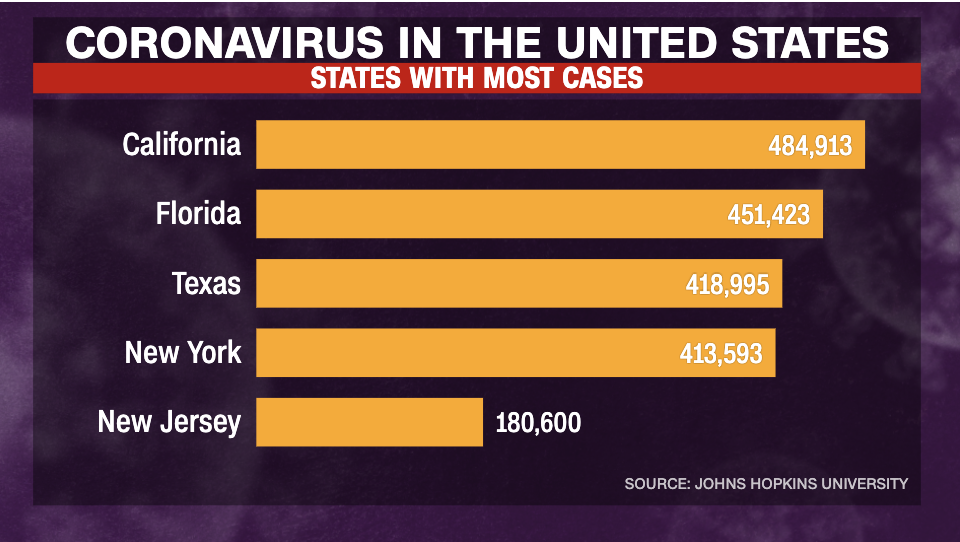 Medical teams on the frontlines in Texas said that spikes in the state have taken a toll.

"It's very hard. We're seeing entire families in our communities ravaged by the virus," said Dr. Martin Schwartz, who treats patients in intensive care units. "A lot of deaths inside one single family. It's terrible."

The main hotspot in the state has been the Rio Grande Valley, where hospitals began reaching capacity earlier this month.

Health officials say the pandemic is wreaking havoc on communities in Hidalgo County.

"It's a tsunami what we're seeing right now," said Dr. Federico Vallejo, a critical care pulmonologist. He told CNN last week that he is treating up to 70 patients a day compared to the usual 15 to 20 a critical care doctor sees during a rotation.

Texas was one of the first states to reopen in May, but Gov. Greg Abbott announced a pause to any further reopening in June when cases surged. Now Texas is one of the 41 states to implement mask requirements in some form to protect against the virus's spread.

Here are the latest updates out of Texas.

Dr. Stephen Hahn, commissioner of the US Food and Drug Administration, said Thursday that his agency "will not cut corners" when it comes to approving a Covid-19 vaccine.

On Wednesday, an FDA official announced that the agency could issue an emergency use authorization for a coronavirus vaccine in a matter of weeks -- once a vaccine meets efficacy requirements.

Speaking on NBC’s Today show on Thursday, Hahn said that even though things have been moving quickly on the vaccine development front, the FDA will focus on assisting developers and making sure a potential vaccine meets the safety and efficacy standards.

"We're going to call the balls and strikes on this," Hahn said. "We will not cut corners. We will use our very high standards of safety and effectiveness. We'll look at those data, and we'll make a determination based upon those high standards. We have terrific scientists and people at FDA, and I know -- and I'm confident -- that we'll do that job on behalf of the American people."

Hahn said it's possible that a vaccine could be ready for distribution by the end of the year. "Things have been moving very quickly. I know our team is looking at data in real-time from these trials. And that should help us expedite this," Hahn told NBC's Savannah Guthrie.

He said the decision on whether to take hydroxychloroquine, a drug that has been both promoted and taken by President Donald Trump, should be made between a patient and their doctor.

For a second straight day, Florida broke its record for the number of daily coronavirus deaths. Miami-Dade County Mayor Carlos Gimenez said that the county will see a high number of deaths for a while, but that there is a “silver lining.”

“We're going to see a higher level of deaths for some time, until we start to drop our positivity rate below 10%. It was a steep rise to the top, and I think it's going to be a gradual decline,” Gimenez said on CNN’s “New Day.”

But the hospitalization rate is stable, and cases are not rising anymore, he said.

“We are stabilized and we're coming down. So not rising is also very, very good news … There is a silver lining to this, but it will take some time for us to go down to where we would like to see it, somewhere around the 5% level. We're still a long way,” he said.

The average positivity rate is at about 18%, he said.

As the state of Georgia continues its fight against coronavirus, state records show 87% of critical care beds are in use, according to data released on Wednesday by Georgia Emergency Management.

A total of 2,584 critical care hospital beds are in use across the state. Nearly half — or 1,017 — of the critical care bed occupancy are at hospitals in the metro Atlanta area, according to state data.