Vietnam reported 45 new coronavirus cases on Friday, the largest single-day increase in infections since the pandemic hit the country in late January.

All of the new cases were discovered in the resort city of Da Nang, where a fresh outbreak resurfaced last week, according to the state-run Vietnam News Agency (VNA).

Among the new cases, 41 were linked to several hospitals and clinics in Da Nang, with the other four linked to a hotel in the city, according to VNA.

As of Friday morning, at least 53,760 people are in isolation, either at healthcare facilities or at home, VNA reported.

The new cases raise Vietnam’s total number of infections to 509, while the death toll remains at zero.

Chief Cabinet Secretary Yoshihide Suga said Friday morning that even though the case numbers are high, the government does not intend to enact a state of emergency.

Instead, the government would focus on preventing further infections and continue with an economic stimulus strategy to deal with the fallout from the pandemic, Suga said.

The capital city of Tokyo recorded 367 cases on Thursday. Health authorities have earlier linked the majority of cases in the city to young people who gathered in bars and restaurants. Tokyo governor Yuriko Koike has asked restaurants and karaoke bars in the city to reduce their opening hours.

The southern prefecture of Fukuoka recorded 121 cases on Thursday, while Osaka confirmed 190 infections.

The Australian state of Victoria reported 672 new coronavirus cases and eight deaths on Friday, according to the state's premier Daniel Andrews.

The total number of infections in Victoria, the second-most populous state in Australia, now stands at 10,577, with 112 deaths, according to Andrews.

Door knocking campaign: Andrews said he has no announcements to make about harsher lockdowns but he would not rule out more frequent door knocking to check if people are staying at home.

More than 130 people -- one in four of those who’ve tested positive -- were caught defying stay-at-home orders, according to the Premier.

Authorities have increased manpower to crack down on isolation dodgers, with 34 teams of officers deployed to knock on the doors of infected individuals.

“Both public health experts from the Victorian team and those on a national level will spend the next day or two looking at the data at the six-week point, the halfway point of the stay-at-home orders that we put in place,” Andrews said. “That analysis will happen today and tomorrow, and then we'll have more to say.”

Though Friday’s figures are slightly lower than the previous day, Andrew said that it is “almost impossible” to see Victoria’s economy open up any time soon.

That marks the third consecutive day that the country has reported over 100 new infections.

Among the new cases, 123 were locally transmitted, with 112 confirmed in the far western region of Xinjiang and the rest in the northeastern province of Liaoning.

The country also recorded a further 11 asymptomatic infections on Thursday.

The University of Washington now projects there will be 230,822 US deaths from Covid-19 by November, based on the current scenario.

On July 22, the university’s Institute for Health Metrics and Evaluation (IHME) forecasted 219,864 total deaths from the virus by November.

The latest update reflects an increase of about 11,000 deaths due to an increase in infections and the refusal by some people to wear masks, to practice social distancing, and to perform other measures to mitigate the transmission of the virus.

If the US universally adopted wearing masks, the number of deaths by November would drop to nearly 198,831, the model projected. The use of masks is up but not as high as it should be across the nation. However, there has been a rise in mask wearing across states and locations with increased cases and deaths, the IHME said.

"If 95% of Americans wore masks each time they left their homes, infection rates would drop, hospitalizations would drop, and forecast deaths would drop,” said Ali Mokdad, a professor of health metrics sciences at IHME. "Unfortunately, people let down their guard until media report the risk of increased infections."

Some context: So far, according to Johns Hopkins University, nearly 4.5 million Americans have been diagnosed with coronavirus infections and at least 152,000 have died.

"We would like for Americans to keep their guard up to reduce the transmission of the virus. We do not have an effective drug and vaccines are on their way, so prevention is key." Mokdad told CNN.

The US economy contracted at a 32.9% annual rate from April through June, its worst drop on record, the Bureau of Economic Analysis said Thursday.

Business ground to a halt during the pandemic lockdown in the spring of this year, and America plunged into its first recession in 11 years, putting an end to the longest economic expansion in US history and wiping out five years of economic gains in just a few months.

A recession is commonly defined as two consecutive quarters of declining gross domestic product -- the broadest measure of the economy. Between January and March, GDP declined by an annualized rate of 5%.

No ordinary recession: The combination of public health and economic crises is unprecedented, and numbers cannot fully convey the hardships millions of Americans are facing.

In April, more than 20 million American jobs vanished as businesses closed and most of the country was under stay-at-home orders. It was the biggest drop in jobs since record-keeping began more than 80 years ago. Claims for unemployment benefits skyrocketed and have still not recovered to pre-pandemic levels.

While the labor market has been rebounding since states began to reopen, bringing millions back to work, the country is still down nearly 15 million jobs since February. Next week's July jobs report is expected to show another 2.3 million jobs added. That would bring the unemployment rate down to 10.3% -- still higher than during the worst period of the financial crisis. 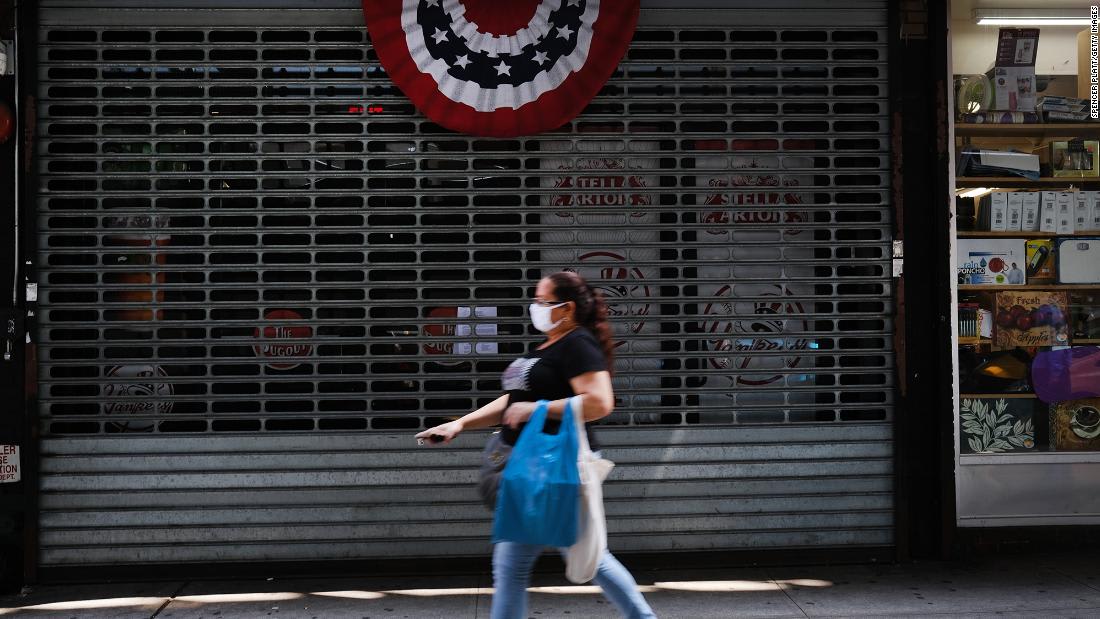 US President Donald Trump said he supports a “temporary extension of unemployment benefits” and slammed Democrats as negotiations on a relief bill remain deadlocked.

Asked what the White House is willing to put on the table to move negotiations Trump said, “It’s a great question. I can’t tell you though because that wouldn’t be very smart for me from a negotiating standpoint but we’ll be putting certain things on the table.”

Trump added that he wants to “get money to people” saying that it wasn’t the fault of American workers but “China’s fault.”

“We’re asking Congress to pass additional legislation to support Americans in need. First we want a temporary extension of expanded unemployment benefits. This will provide a critical bridge for Americans who lost their jobs to the pandemic,” Trump said of the bill.

Trump also slammed what he called “Democratic obstruction,” which he said he was “surprised” by but said he wanted Democrats’ help to temporarily stop evictions.

The UK government on Thursday announced new restrictions in Northern England "to stop the spread of Covid-19."

"This is in response to an increasing trend in the number of cases per 100,000 people in the area," a release from the government read on Thursday.

People in the following areas will not be allowed to "mix with other households (apart from those in their support bubbles) in private homes or gardens" after data showed that "transmission among households is a key infection pathway in the area," the government said.

The new measures apply to the areas of:

The new rules, which also apply to the city of Leicester in the East Midlands, allow people from these neighborhoods to still go to bars and pubs, but "two households should not go to hospitality together."

"The spread is largely due to households meeting and not abiding to social distancing. So from midnight tonight, people from different households will not be allowed to meet each other indoors in these areas," UK Health Secretary Matt Hancock said in the release.

The UK recorded its highest daily rise in Covid-19 cases in more than a month Thursday, according to data from the Department of Health and Social Care (DHSC).

The DHSC reported 846 new coronavirus cases, the highest rise since June 28 when there were 901 new infections. There were also 38 deaths reported Thursday, compared to 36 deaths on June 28, DHSC data shows.

The government also announced lifting of restrictions in other local areas, such as in Oadby and Wigston, and on August 3, restaurants, cafes, bars and hairdressers in Leicester can reopen.

The government also urged anyone celebrating Eid al-Adha this weekend to "follow the new rules and protect the ones they love."