The state of Florida is reporting 9,591 new cases of Covid-19 among Floridians and 179 additional resident deaths on Saturday, according to Florida Department of Health (DOH).

This marks the fifth consecutive day that the state reported more than 9,000 new cases, according to CNN's tally.

There are now 474,621 cases among residents and 480,028 total cases in the state, including out of state residents, DOH reports. Florida has reported 7,022 resident deaths to date, DOH data shows.

There are currently 7,942 people hospitalized in Florida with with Covid-19, down from above 8000 last weekend, according to the Agency for Health Care Administration (AHCA).

A large crowd that includes members of the anti-vaccine movement, far-right and neo-Nazi groups have gathered for a “sit-in” at Berlin’s iconic Brandenburg Gate to protest against the German government’s coronavirus restrictions.

A march earlier Saturday that was criticized by police for not adhering to rules on social distancing and face masks was halted by organizers. Police filed a criminal complaint against one organizer for violating hygiene rules.

Current coronavirus guidelines in Germany stipulate that people must maintain a distance of 1.5 meters (around 5 feet). Where that is not possible, face masks must be worn.

Police warned the roughly 17,000 protesters who participated in the earlier march would only be allowed to participate in the demonstration at Brandenburg Gate if they wore face coverings and maintained social distance.

A live stream from the protest showed almost no one wearing a face mask although the master of ceremonies told the crowd from the stage to maintain physical distance so as not to give the authorities “a pretext” for breaking up the event.

Pelosi reiterated that Democrats are not interested in a short term deal ahead of her and Senate Minority Leader Chuck Schumer's meeting with Treasury Secretary Steven Mnuchin and White House Chief of Staff Mark Meadows.

“We’re just hopeful that they’re willing really to negotiate today, if they are, we’re prepared to make a deal on behalf of the American people,” Meadows said as he entered Pelosi‘s office.

Some context: The unemployment benefit that has kept millions afloat amid the worst economic crisis in decades officially expired at midnight Friday. Weekly jobless claims continue to rise. Economic forecasters are warning of another slowdown. The coronavirus has resurged across the country.

The US Senate has adjourned for the weekend.

President Trump said Mnuchin and Meadows would bring new options on unemployment benefits to the table Thursday night, and according to a person briefed on the talks, they did in the form of a longer-term extension of the enhanced unemployment benefits at the $600 level. Democrats again rejected the idea of decoupling the benefit extension from the broader talks.

There was tangential progress made in the sense that new proposals were put on the table and there was more depth in the talks about how to structure a proposal, the person said. But the separation between the two sides is still enormous.

The United Kingdom may need to choose between keeping pubs open or allowing schools to reopen it if it wants to keep coronavirus infection rates down, a key member of the group advising the government on Covid-19 response told British media.

“Closing some of the other networks, some of the other activities may well be required to enable us to open schools. It might come down to a question of which do you trade off against each other and then that’s a matter of prioritizing. Do we think pubs are more important than schools?” Professor Graham Medley, who chairs the Scientific Advisory Group for Emergencies (SAGE) sub-group on pandemic modeling, told BBC radio Saturday.

Medley's comments were made a day after crowds were seen in bars and pubs in parts of northern England despite a spike in cases the reintroduction of some government restrictions in several areas.

Pubs were allowed to reopen across the UK on July 4.

“I think we’re in a situation whereby most people think that opening schools is a priority for the health and wellbeing of children,” Medley said.

On Friday: Prime Minister Boris Johnson said England would “squeeze the brake pedal” on the next phase of re-opening in a bid to slow down the rising rates of coronavirus infection.

New restrictions were announced for northern England late Thursday in an effort "to stop the spread of Covid-19." Across the country, certain venues that were schedule to reopen Saturday – including , casinos, bowling allies, skating rinks and “the remaining close contact services – will remain shuttered until at least Aug. 15.

For the third day in a row, Poland reported the highest number of new daily coronavirus cases since the start of the pandemic, with 658 new infections reported on Saturday, according to the country's health ministry.

Some context: Poland reported 657 new infections on Friday and 615 on Thursday – both were new records at the time.

On Thursday, the Polish government told CNN it was considering different scenarios to bring the infection levels under control.

Prime Minister Mateusz Morawiecki said at a news conference on the same day that he would like to avoid another lockdown due to the damage it can inflict on the economy.

Some coronavirus survivors have been experiencing hearing problems that lasted until long after they had been released from hospital, a small study has revealed.

Audiologists at the University of Manchester surveyed 121 adults who had been hospitalized with Covid-19 eight weeks after they were released.

The researchers said the results, published in a letter to the International Journal of Audiology, add more anecdotal evidence to our understanding of the long-term effects of coronavirus on health.

Kevin Munro, professor of audiology and the Hearing Health Theme Lead at the Manchester Biomedical Research Centre, said scientists already knew that other viruses such as measles, mumps and meningitis can cause hearing loss and that coronaviruses can damage the nerves that carry information to and from the brain.

“It is possible, in theory, that Covid-19 could cause problems with parts of the auditory system including the middle ear or cochlea," he said.

Iraq is one of several countries in the Middle East that have been fighting rising numbers of new infections while also struggling with a severe heatwave this week.

In the capital Baghdad, two people were killed and 11 others injured during protests over electricity shortages, and lack of basic goods, that erupted in the capital's Tahrir square earlier this week as temperatures reached 50C (122F).

Iraq announced a 10-day curfew after the country surpassed 100,000 Covid-19 cases on Sunday. The announcement came just before the Eid al-Adha holiday, which started on Thursday night.

The four-day holiday is normally marked by congregational Eid prayers, family gatherings and large feasts. Eid al-Adha follows on from the Hajj pilgrimage to Mecca in Saudi Arabia, which was also affected by coronavirus -- instead of the usual 2 million, only 1,000 pilgrims were allowed to take part this year.

Middle East grapples with heatwave during Eid and Coronavirus pandemic

George Ahearn, who grew up in the farming town of Othello, Washington, co-founded EastWest Food Rescue after learning that Covid-19 was costing local farmers so much business that they were willing to destroy their crops.

His non-profit has since moved three million pounds of produce from farms in eastern Washington to the western part of the state for distribution to hundreds of food banks and meal programs.

"I know these people that I grew up with on one hand, and on the other hand I know there is a need here; I'm just going to connect the two dots," Ahearn, 45, who now lives in Bothell, Washington, and also runs a nursing business told CNN. 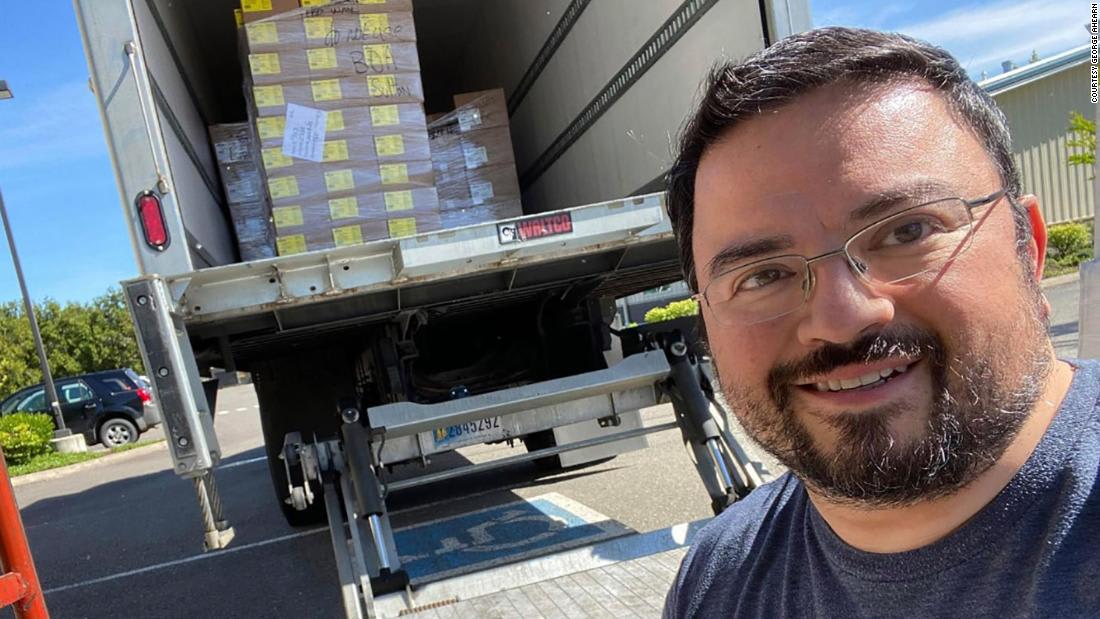 When a man heard that farmers were destroying unsold produce, he arranged for trucks to deliver 3 million pounds of it to food banks

In a speech before he was voted in as the head of the World Health Organization, Tedros Adhanom Ghebreyesus said that when he was seven, his younger brother died "from one of the many child killers in Africa."

He said that could easily have been him, and it was "pure luck" that he was now on stage running for a global leadership position. He said he was committed to reducing inequality and ensuring universal health coverage because he had grown up "knowing survival to adulthood cannot be taken for granted, and refusing to accept that people should die because they are poor."

Who is the man leading the WHO at the time of the worst health crisis in a century? Read more here. 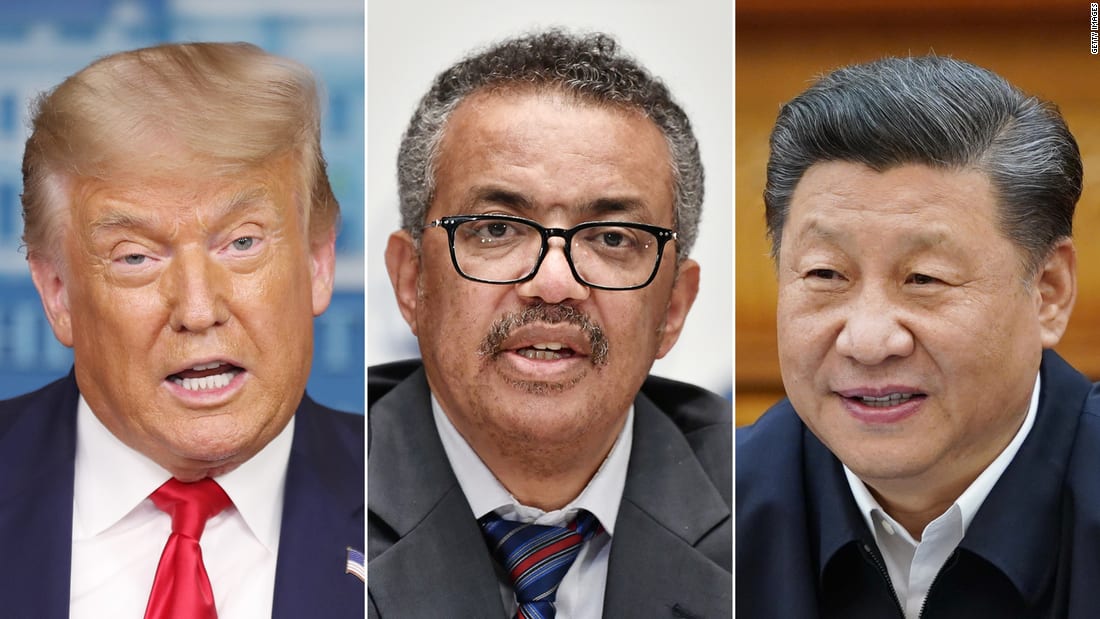 WHO leader is stuck between feuding China and US. It's a situation 'rock star' Tedros has spent his life preparing for