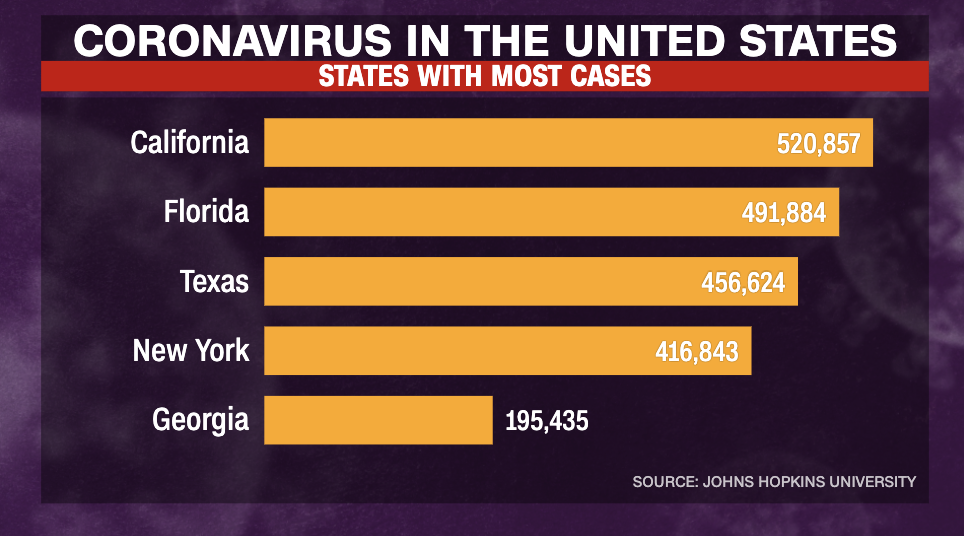 At least 13 states have reported more than 100,000 coronavirus infections and four of them — California, Florida, Texas and New York —have recorded more than 400,000.

California, with more than 516,000 positive cases, has reported the most infections in the nation, but is beginning the week on a positive note. The state reported a seven-day average of cases of about 7,764 Monday, which is down about 21% from the previous week, Gov. Gavin Newsom said.

In Los Angeles County, officials said they're cautiously optimistic as data trends seem to be stabilizing and moving slightly downward. Los Angeles is seeing a seven-day average of about 2,600 cases per day, down from a couple weeks ago when that same average was more than 3,000 cases each day.

Florida has the second-highest number of cases in the country, with more than 491,000 recorded infections.

Two teenagers between the ages of 14 and 17 have also died in the state, according to state data, bringing the total number of minors in Florida who have died in relation to the virus to seven.

In Texas, Houston Mayor Sylvester Turner, who in July proposed a two-week stay-at-home order to help drive down cases, said Monday the city will be issuing citations and fines to people who are not following the state's mask mandate. The state has reported more than 455,000 infections and more than 8,000 people are hospitalized statewide.

"When we are encountering people on patrols, out and about, and we are seeing that they do not have their mask on when they are in public and around other people, we will provide the necessary warning," Turner said. "And then a failure to heed to that warning will lead to a citation and a $250 fine," he said.

Track the virus in your state here.

At least 45 hospitals in Florida have reached ICU capacity and show zero ICU beds available, according to data released by the Agency for Health Care Administration (AHCA).

Seven of the hospitals at capacity are in Miami-Dade County and five of them are in Broward County, AHCA data shows.

Another 34 hospitals have 10% or less ICU capacity available, according to AHCA.

AHCA reports about 19.6% ICU beds are available across the State of Florida.

Debi and Michael Patterson said they were flippant about the coronavirus, not wearing masks and hanging out with friends as normal.

“It was sort of almost like a joke in our group of friends,” Debi Patterson said in an interview with CNN’s Miguel Marquez.

But then they got sick — and Debi needed to go to the hospital to be put on oxygen.

“We paid the price for it,” Michael Patterson said.

The Lake Havasu City, Arizona, couple got sick in late June, and more than a month later, Debi said she still experiences symptoms.

“Still short of breath, coughing, just the fatigue and dizziness, headaches almost daily; It's almost like somebody hit you in the head,” she said.

“It's ridiculous not to take this seriously. I mean, I could have died just like the next person. I mean, anybody can. It could have been either one of us or both of us,” she added.

Michael has a simple message for others: “Keep your distance and wear a frickin' mask.”

Poland has recorded 680 new Covid-19 cases — the largest increase since the beginning of the pandemic. As a result of the rising numbers, the government is considering whether to impose quarantine restrictions on travelers returning from certain countries.

A communications officer for the Ministry of Health told CNN on Tuesday that the 680 cases mainly came from three regions in the country.

The communications officer said there hasn’t been a decision yet on whether to impose quarantine restrictions on travelers. The officer also said that the Polish government is still "monitoring the epidemiological situation in other countries" and if it "turns out that travel to certain countries will be dangerous" quarantine restrictions may be imposed.

UCLA will only offer about 8% of fall courses on campus or in a hybrid model, and nearly all classes will shift to remote delivery after Thanksgiving, the university announced Monday.

In June, UCLA planned to offer up to 20% of classes in some sort of in-person format. However, “with Los Angeles county experiencing a dramatic rise in COVID-19 infections and hospitalizations, we have found it necessary to adjust our plans to reduce the health risks to our campus community,” according to the announcement to students.

In-person classes include certain lab, studio, clinical, and other hands-on courses deemed impossible to offer virtually though the school is attempting to offer alternatives wherever possible for what it calls a “truly unique academic year.”

Face coverings are mandatory indoors and outdoors, daily symptom checks are required, and asymptomatic testing is required for students in university housing or participating in on-site hybrid courses.

The top negotiators on the next round of emergency economic relief cited a "productive" meeting Monday afternoon as they sought to build momentum toward an agreement.

The somewhat positive tone sought to obscure a cold reality, according to people briefed on the talks: the two sides remain nowhere near a deal.

Here's the latest on the stimulus negotiations:

Bottom line: The top Democratic and White House negotiators have now held six closed-door meetings, for more than 10 total hours, over the course of eight days. By their own admission the most recent meeting was deemed productive because the two sides had a better understanding of their disagreements — after six meetings. The two sides are still figuring out one another's disagreements. No amount of positive spin can cover up just how long — and rocky — the path toward a final agreement remains.

What to watch today: Treasury Secretary Steven Mnuchin and White House chief of staff Mark Meadows will be back on Capitol Hill for meetings. Senate Republicans hold their closed-door conference lunch at 12:45 p.m. ET, with a leadership news conference afterward.

Where progress was made: The area where there was at least some progress on Monday was on the education piece of the broader proposals. Republicans have put $105 billion on the table, split between K-12 and colleges, with a chunk of the funds directed explicitly toward the costs associated with schools that are reopening. Democrats remain wary of tying anything to reopenings amid the pandemic and have pressed for more topline money.

But the negotiators did a deep dive into the numbers on Monday, which is a key step toward starting to lay the groundwork for what is actually needed for an agreement.

As Senate Democratic Leader Chuck Schumer put it: "By going to these specific numbers and what each side thinks they can do with their dollar allocation, it really helps us understand that and move together in a better direction. That's what we spent time doing."

Again, that seems like a fairly pro forma part of any negotiation, but getting to a more granular level has been something that's been missing from the talks up to this point.

Read more about the negotiations here.

In the US, the spread of the virus is more widespread than ever before, prompting White House coronavirus response coordinator Dr. Deborah Birx to say over the weekend the country has entered a "new phase" of the pandemic.

But there are some states that have gotten it right by not letting up on restrictions after their case numbers began dipping. Among them, Connecticut, which has one of the lowest infection rates in the country.

The state is in its second phase of reopening, where restaurants are limited to 50% indoor capacity and bars — which health officials across the country have said fueled the spread of the virus — remain closed. All businesses that reopen must first certify with the state they are following coronavirus-related guidelines.

"You're not pulling back on your vigilance, and making sure you don't have resurgence of cases that would put you back, rather than stay where you are and going forward," Fauci said.

Other states, like New York, which were slower to reopen, lifted restrictions by regions, and are cracking down on individuals and businesses not adhering to guidelines, are also reporting good news. New York's positivity rate over the weekend was lower than 1%, the governor said.

Across the country, more than 4.7 million have been infected since the start of the pandemic and at least 155,469 have died.

Health officials project there will be thousands more deaths in the coming weeks.

There are currently 238 employees and 243 in-custody inmates who have tested positive for Covid-19, according MDCR.

The employees and inmates are in isolation.

To date in Florida, 53 inmates have died from Covid-19 related complications, according to the Florida Department of Corrections.

There have been more than 18.3 million confirmed cases of coronavirus worldwide, and close to 700,000 deaths, according to figures from Johns Hopkins University.

Potential "generational catastrophe": UN Secretary-General Antonio Guterres warned on Tuesday that the world is facing a "generational catastrophe" because of school closures during the coronavirus pandemic. In mid-July, schools were closed in more than 160 countries, affecting more than 1 billion students, while at least 40 million students worldwide have missed out on education in their critical pre-school year.

Warning of French second wave: France’s top scientists have advised the country to be ready for a further wave of Covid-19 as they predict “a resumption of the circulation of virus at a high level in the fall of 2020.”

Germany already in second wave, says doctors' group: Meanwhile, a physicians' association has warned that Germany is already experiencing a second wave. "We are already in a second…wave of rising infections,” Susanne Johna, head of the Marburger Bund said in an interview with the Augsburger Allgemeine newspaper.

Iran reports 212 deaths in a day: Iran has recorded 212 additional coronavirus-related deaths in the past 24 hours, bringing Iran's death toll to 17,617, Health Ministry spokesman Sima Sadat Lari said Tuesday. In Iran, the worst-hit country in the Middle East by Covid-19 according to Johns Hopkins University data, one life is lost every seven minutes due to coronavirus, Iranian state television said Monday, quoting the deputy health minister.

India logs more than 50,000 cases for sixth day: India recorded 52,050 new Covid-19 infections and 803 deaths from the virus over the past 24 hours, the country's Ministry of Health and Family Welfare said on Tuesday -- the sixth consecutive day that India has reported more than 50,000 cases.

New penalties were also announced for people found to be in breach of directions, including a newly increased $3,540 on-the-spot fine for those who breach isolation orders. Andrews said the new fines were being imposed because of the 3,000 door knocks on infected people -- who are meant to be self isolating -- 800 patients were not home.