After the Ohio Children’s Hospital Association and the Ohio Chapter of the American Academy of Pediatrics jointly recommended masks be worn by children K-12 returning to school, Ohio Gov. Mike DeWine announced Tuesday that he would be issuing an order that reflects this policy statewide.

“This gives us the best shot to keep Ohio's kids and educators safe and physically in school,” DeWine said.

The mask order will not apply to children under the age of two, or any child unable to remove the face covering without assistance.

Additionally, children with significant behavioral psychological issues or those undergoing treatment that is exacerbated specifically by the use of facial covering, will not be required to wear them.

“I have great confidence that the teachers will work this out with kids, but that this is what the norm should be,” DeWine added.

Governors from the states of Maryland, Louisiana, Massachusetts, Michigan, Ohio and Virginia announced a bipartisan interstate compact to run three million rapid antigen tests to slow the spread of Covid-19 and continue safely reopening their states, according to a statement released on Tuesday.

The agreement between six governors — three Republicans and three Democrats —demonstrates to private manufacturers that there is in fact a significant demand to scale up the production of these the rapid tests, which deliver results in 15 to 20 minutes, the statement reads.

The states are currently in discussions with Becton Dickinson and Quidel, US manufacturers of antigen tests that have already been authorized by the FDA, to purchase 500,000 tests per state, for a total of three million tests, according to the statement.

Through this interstate compact, states are coming together to ramp up the use of rapid antigen testing to help better detect outbreaks more quickly, and expand long-term testing in congregate settings such as schools, workplaces, and nursing homes and continue reopening the state, the statement indicates.

Hoti is in good health and will stay home for the next two weeks, following his doctor's recommendation, his press office said.

"Indeed, we have a difficult situation here, but the government and health institutions are doing everything they can to manage and prevent this pandemic," the press office told CNN in an e-mail.

“We are prepared to be in session until we get one,” Cornyn said. “We will be in session next week if we don’t get a resolution this week.”

Asked if senators would be in session all of August, he said he couldn’t predict that.

“How do you think it looks for us to go back home if this is unresolved? This is the most important thing we need to be doing.”

The Illinois Department of Public Health on Tuesday reported 1,471 new Covid-19 cases, bringing the state’s total of cases to 184,712.

The state has reported over 1,000 new cases for 14 days straight.

According to a release from the public health agency, the seven-day positivity rate is down slightly, to 3.9% from the 4% reported on Monday.

The agency also reported an additional 19 deaths today, including one teenager. According to the dashboard, six people under the age of 20 have died from the virus statewide. There are a total of 7,545 deaths.

The state also reported 1,496 hospitalizations, with 365 in intensive care units and 125 on ventilators.

Brazil is seeking alternatives with other producers if there is a delay in the development and delivery of the vaccine developed by the University of Oxford and AstraZeneca, Brazil’s Deputy Secretary of Health Élcio Franco said.

"Because it is a purchase based on (unproven) technology, there is a degree of uncertainty. Although it seems remote to us, there is a possibility of a delay in the vaccine development. Even being in the most advanced (stage), we have been looking for alternatives," Franco said during a news conference on Monday evening.

In late July, Interim Health Minister Eduardo Pazuello announced his government had the Pfizer and BioNTech vaccine "on the radar," after Anvisa (the country's National Health Surveillance Agency) approved the trial in Brazil.

Pazuello had also confirmed negotiations with the biotechnology company Moderna for a possible priority purchase of their vaccine.

Before the coronavirus pandemic hit, Indianapolis 500 officials talked about attendance levels of some 300,000 for the 2020 version of America's iconic open-wheel event. That number is now zero.

Indianapolis Motor Speedway tweeted Tuesday, "It is with great regret that we announce the Indianapolis 500 will take place on Aug. 23 without fans. This tough decision was made following careful consideration and extensive consultation with state and city leadership."

Just two weeks ago, track officials announced they would allow 25% capacity at Indianapolis Motor Speedway, with a mandatory face mask protocol in place. That statement was preceded by a late-June announcement indicating a 50% cap on attendance.

The race was originally scheduled to run May 24, but was postponed by Covid-19.

More than two dozen House Democrats sent a letter Tuesday urging congressional leaders to include provisions to boost mask use in the United States in the next round of coronavirus stimulus.

In a letter led by Rep. Ro Khanna and Rep. Adam Schiff, the lawmakers requested that Congress provide free masks to all Americans, funding for a CDC public service announcement campaign about masks, and provisions for research into "mask efficacy and optimal design.”

"Masks are one of the most effective and least disruptive interventions that we have against COVID-19, and the upcoming legislative package is a perfect opportunity to send a clear message to the American people that masks work,” the lawmakers wrote.

They said the masks could be distributed by the US Postal Service and made accessible at convenient pick-up locations around the country.

"While nothing short of a vaccine or a cure can truly end the threat of this virus, we must aggressively pursue simple and affordable courses of action that can mitigate infections and save tens of thousands of lives,” they argued.

There are at least 4,732,418 cases of coronavirus in the US and at least 155,942 people have died from the virus, according to Johns Hopkins University's tally of cases.

Here's a look at how the Covid-19 death toll has progressed in the US over time: 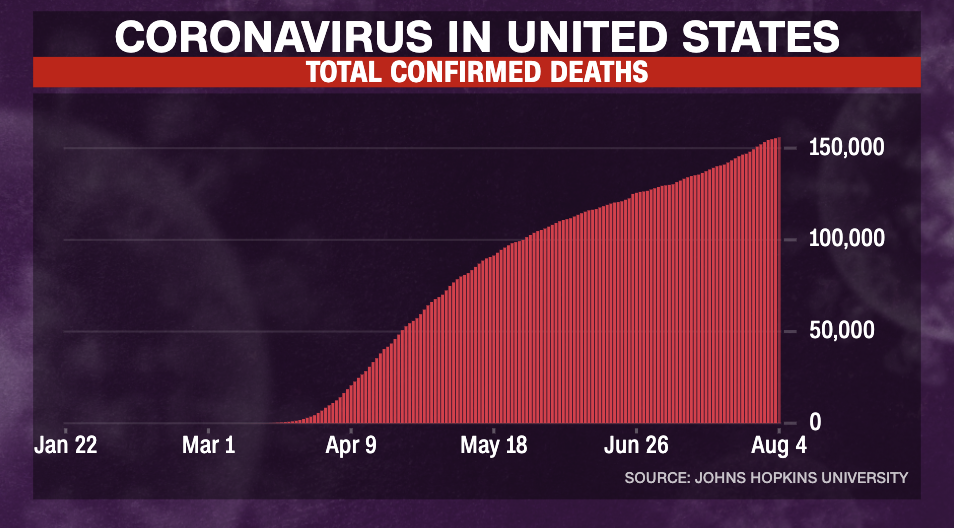