That brings the total number of confirmed infections across the country to at least 4,823,890, including at least 158,250 deaths.

The Australian city of Melbourne has shut all non-essential businesses, as "Stage 4" restrictions come fully into force as part of a six-week lockdown.

Essential services will remain in business. Meat processing facilities considered high-risk, warehouses, and construction will continue to operate at a reduced capacity.

The Stage 4 restrictions will cost the Australian economy up to $8.5 billion over three months, Prime Minister Scott Morrison said Thursday, acknowledging it was necessary but painful.

The state of Victoria, of which Melbourne is the capital, saw 471 new cases and eight related deaths on Wednesday, said Victorian Premier Daniel Andrews.

"I'm not for a moment saying businesses are happy about this They're not, I'm not, workers are not. This is not the position we wanted to find ourselves in,” Andrews said. "But the reality of the challenge we face, a greater challenge than perhaps we've ever faced, is we have to make these tough calls."

The new figures raise the national total to 42,975 total confirmed cases and 1,037 deaths.

The recent spike in cases has seen infection rates higher than April, when the country was placed under a state of emergency -- but Prime Minister Shinzo Abe said he does not plan to reimpose the state of emergency because "the situation is very different from that time."

"We are not in the situation that needs to issue the state of emergency immediately, but we will keep the close eyes with high sense of alert," Abe said at a news conference in Hiroshima.

He added that the monthly death toll has dropped from 460 in May to 37 in July, and the number of severe cases also fell.

The country has more than 20,000 beds for coronavirus patients and 2,500 beds for serious cases, and the medical system is not under strain, he said.

There were no new deaths recorded.

That raises China's total to 88,328 confirmed cases and 4,677 deaths, according to data from Johns Hopkins University.

Stepping up testing: China ramped up its testing in recent weeks, reaching 4.84 million tests conducted each day by the end of July, said Wang Jiangping, Vice Minister of the Ministry of Industry and Information Technology.

Nationwide, almost 5,000 medical institutions and 38,000 technicians were on hand to carry out the mass testing blitz.

"A total of nearly 200 million copies of testing kits have been distributed to hospitals, disease control centers, customs ports, and third-party testing agencies across the country," Wang said.

Earlier on Wednesday, Mexican President Andrés Manuel López Obrador announced a minute of silence for Covid-19 victims, that will take place every day at noon across government offices and Armed Forces facilities in the country.

Twitter said on Wednesday it had restricted US President Donald Trump's campaign from tweeting after its account shared a video containing false claims about the coronavirus.

The tweet, a video of Trump's interview with Fox News in which he said children are "almost immune" to the virus, "is in violation of the Twitter Rules on Covid-19 misinformation," a Twitter spokesperson said in a statement.

The account appeared to have the ability to tweet following Twitter's statement, suggesting the campaign had complied with the order and removed the video.

Campaign's response: Courtney Parella, a spokesperson for the Trump campaign, said the President was "stating a fact that children are less susceptible to the coronavirus," echoing the statement she shared after Facebook's removal.

Parella accused Silicon Valley of being biased against the President and said "social media companies are not the arbiters of truth."

Last week, Twitter imposed a similar restriction on the account of the President's son, Donald Trump Jr., after he posted a video featuring a doctor making false claims about coronavirus cures and stating that people "don't need masks" to prevent the virus from spreading.

Twitter said at the time that some of the account's functionality, including the ability to tweet, would be restricted for 12 hours.

The world is not going to be able to eradicate the coronavirus, Dr. Anthony Fauci, the US' leading infectious disease expert, said Wednesday in an interview with Reuters.

A vaccine can help get the pandemic under control, Fauci added.

“I don't think we’re going to eradicate this from the planet because it's such a highly transmissible virus that that seems unlikely,” Fauci said in the interview, posted on YouTube. “But what I think we can do with the combination of a good vaccine and attention to public health measures -- by attention I don't mean shut down, I mean things that are just prudent -- then I think we can get behind this."

After next year, the virus should be manageable, Fauci predicted.

“I hope and feel it's possible that by the time we get through 2021 and go around for another cycle that we'll have this under control,” he said. “Is it conceivable that we won't? Of course. I would be unrealistic to say that. Do I think we're going to have much, much better control one full year from this winter? I think so.”

France has recorded the highest daily rise in coronavirus infections in more than two months, according to figures published by the National Health Agency on Wednesday.

France reported 1,695 new cases in 24 hours, making this the biggest increase since May 30, when an increase of 1,828 cases was recorded.

The number of coronavirus patients in hospitals and in intensive care units has decreased in the past 24 hours, according to the Health Agency data.

The overall death toll in the country stands at 30,305.

Read more about the resurgence of coronavirus cases in Europe: 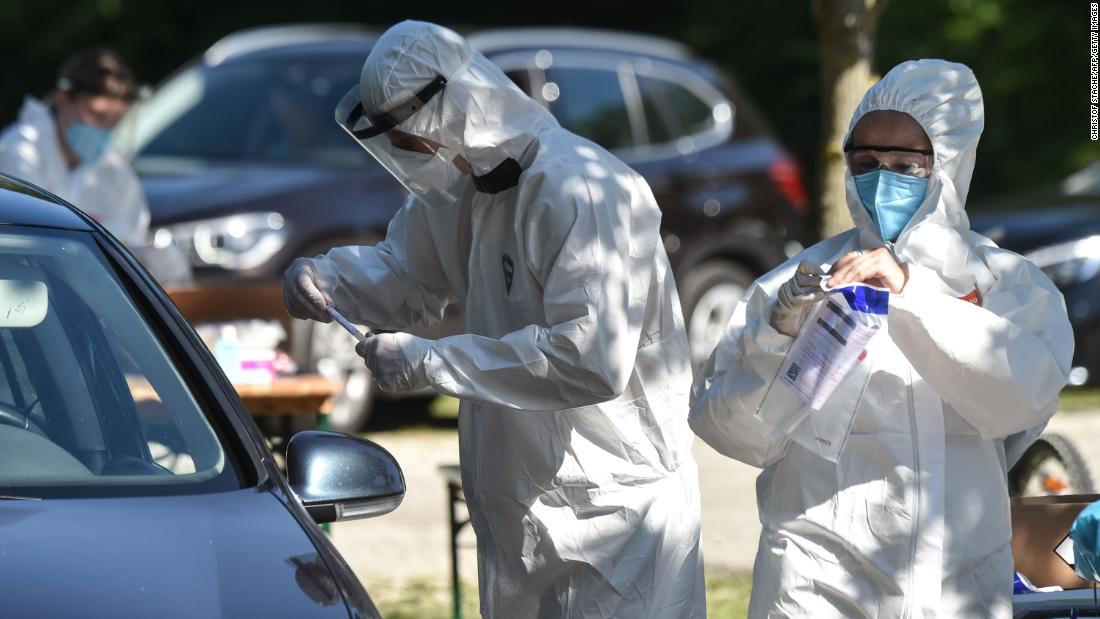 Dr. Anthony Fauci, the US' leading infectious disease expert, warned that if the United States does not have a unified response against Covid-19, the country is at risk of continuing to "smolder."

Speaking to CNN's Sanjay Gupta, Fauci used the metaphor of a rowing team, noting that while watching matches of his daughter who was on a varsity crew team in college, he learned that to "win the race" all those on the boat must be "rowing in unison."

"The only way you're going to win the race is that when all eight are rowing in unison. You get one that catches a crab, as it were, with, an oar goes that way or you don't row, you don't win. So as long as you have any member of society, any demographic group who's not seriously trying to get to the end game of suppressing this, it will continue to smolder and smolder and smolder, and that will be the reason why in a non-unified way we've plateaued at an unacceptable level."

Fauci added that he thinks this lack of unity "is the problem."