The US has reported more than 1,000 deaths from coronavirus daily for the last five days, according to data from Johns Hopkins University's Covid Tracker.

Since July 21, there have been only four days that the US has not reported more than 1,000 deaths.

Former Vice President Joe Biden has released a statement reacting to the US surpassing 5 million cases of coronavirus on Sunday.

“Each time the number clicks up, it represents a life altered, a family stricken with anxiety, a community on edge,” Biden said in a statement released Saturday.

Biden encouraged mask-wearing, saying, “I know that for many Americans, especially as the months continue to drag on, there are moments when the losses feel unbearable. But we must not give up. We must follow the science and the advice of medical experts — starting with wearing a mask. That is how we will beat this virus.”

The presumptive Democratic presidential nominee went on to criticize President Trump's leadership in the statement.

“And yet, we continue to hear little more from President Trump than excuses and lies in an effort to cover for his repeated failures of leadership — failures that worsened the pandemic here at home, and in turn deepened our economic crisis,” Biden said.

More context: CNN reported Sunday morning that are now at least 5,000,603 cases of coronavirus in the United States and at least 162,441 people have died from the virus, according to data compiled by Johns Hopkins University.

These remarks were made after President Trump signed several executive actions, including one that would require states to pay 25% of enhanced unemployment benefits.

“Executive orders will not be a substitute for legislation,” the governor said. “You can’t now say to states who have no funding you have to pay 25% of the unemployment insurance cause."

Cuomo went on to say, “there is no funding for schools that are now trying to reopen and according to the white house they want them to reopen, so they need legislation. It’s the only way to do it,” the governor said.

“When you are in a hole, stop digging, “ Cuomo said

e York state has the lowest one day positive infection rate for coronavirus since the start of the pandemic, Gov. Andrew Cuomo said Sunday during the state’s Covid-19 call.

New York has an infection rate of 0.78% which is normally around 1% or a little under, the governor said.

At least 548 people are hospitalized with Covid-19 and seven New Yorkers died from the virus yesterday, the governor said.

The intensive care unit number is the “lowest number of people we had in ICU units since the start,” Cuomo said.

“Unfortunately, the President’s executive orders described in one word, would be paltry. In three words, unworkable, weak and far too narrow," Schumer said.

Only one of the actions signed by the President was an order – the rest were memoranda.

Schumer specifically criticized the payroll tax deferral, saying he has already talked to companies who will continue withholding payroll taxes in case they will be forced to pay them when the deferral expires in December.

“Employers are just going to continue, withhold the money – I have talked to some – because they don't want their employees to be stuck with a huge bill in December," Schumer added.

The Senator from New York also criticized the policy for depleting Medicare and Social Security funds.

“If you're a Social Security recipient or Medicare recipient, you better watch out if President Trump is re-elected,” Schumer warned.

Treasury Secretary Steven Mnuchin said on “Fox News Sunday” that there would be no cuts in benefits, because there will be an “automatic contribution from the general funds to those trust funds.” 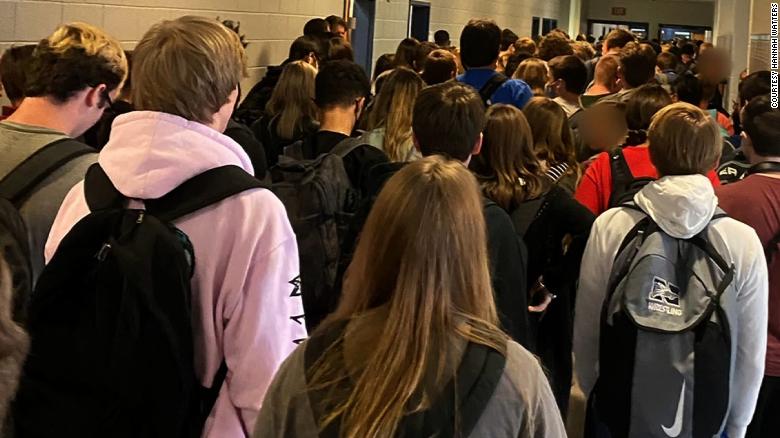 Nine Covid-19 cases were reported at North Paulding High School, according to a copy of a letter sent from Principal Gabe Carmona to parents Saturday.

A spokesperson for the Paulding County School District gave a copy of the letter to the Atlanta Journal-Constitution.

“At this time, we know there were six students and three staff members who were in school for at least some time last week who have since reported to us that they have tested positive,” the letter from North Paulding High School Principal Gabe Carmona said.

CNN is working to get its own copy of the letter to parents.

Some context: This news comes days after a North Paulding High School sophomore posted a photo on Twitter that showed her high school's hallways crowded with students and very few masks visible.

The student, Hannah Watters, was later suspended for posting the photos but on Friday, the high school said in a statement that it had "rescinded" the suspension.