Another 55,910 coronavirus cases were recorded in the United States on Wednesday, bringing the country's total number of confirmed infections to at least 5,197,118, according to Johns Hopkins University's tally.

In addition, Johns Hopkins reported 1,499 new US fatalities from Covid-19. The country's death toll for the epidemic is now at least 166,026.

Mexico and Argentina will produce “between 150 and 250 million doses” of a coronavirus vaccine developed by AstraZeneca, Mexico’s Foreign Minister Marcelo Ebrard announced on Twitter on Wednesday.

Ebrard said financing for the drug's production will be provided by the Carlos Slim Foundation, a Mexico-based nonprofit founded by billionaire Carlos Slim.

“Presidents of Mexico, Andrés Manuel López Obrador, and Argentina's Alberto Fernández have promoted this agreement. We thank AstraZeneca for the dedication and interest in producing a vaccine for Latin America and the Caribbean,” Ebrard said.
“Big and great news for Mexico.”

Further details will be announced on Thursday, Ebrard added.

Race to find a vaccine: There are 28 coronavirus vaccines in human trials around the world, according to the World Health Organization.

Six pharmaceutical companies, including AstraZeneca, have reached deals with the US government to develop a Covid-19 vaccine as part of a federal push to curb the pandemic. The US Food and Drug Administration has previously said it would only approve a vaccine if it meets a 50% efficacy requirement.

Last month, researchers in one of India's largest cities made a surprising discovery. Of the nearly 7,000 blood samples taken from people in Mumbai's slums, 57% tested positive for coronavirus antibodies.

While some were alarmed by the results of the study conducted by the Mumbai authorities and the Tata Institute of Fundamental Research, others were optimistic.

Mumbai's slums, where social distancing is nearly impossible, might now have some of the highest levels of immunity in the world -- only 23.5% of samples taken by India's National Center for Disease Control tested positive for antibodies in Delhi and 14% tested positive in New York, in a study sponsored by the New York State Department of Health.

Scientists believe it's likely that recovering from coronavirus leaves a person with some immunity, but it's not clear how strong it is or how long it lasts. Herd immunity is the idea that a disease will stop spreading once enough of a population becomes immune -- and is appealing because, in theory, it might provide some protection for those who haven't been ill.

If more than half of people in Mumbai's slums had contracted coronavirus, could they be approaching herd immunity -- without a vaccine?

One expert thought so.

"Mumbai's slums may have reached herd immunity," Jayaprakash Muliyil, chairman of the Scientific Advisory Committee of India's National Institute of Epidemiology, said, according to a Bloomberg report. "If people in Mumbai want a safe place to avoid infection, they should probably go there."

But others have been more cautious. David Dowdy, an associate professor in epidemiology at Johns Hopkins Bloomberg School of Public Health, said it was possible that the researchers had used a test that created false positives.

And Om Shrivastav, an infectious diseases expert in Mumbai, cautioned that, less than eight months into the virus' existence in society, it was too early to make any "decisive, conclusive statements." 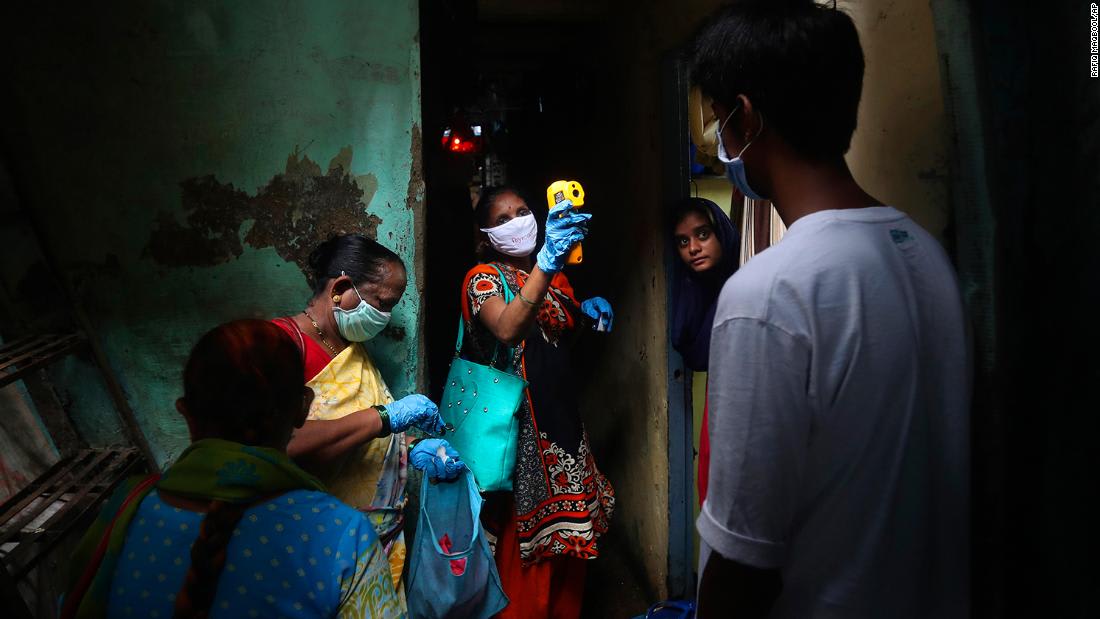 Why India could still be a long way off herd immunity

“What we do know is that the genome sequence of the new cases broadly most closely resemble the patterns from the UK and Australia,” the country's Director General of Health Dr. Ashley Bloomfield said.

Bloomfield added that the genome sequencing investigations are still ongoing and there is currently “no exact link” between the genome sequence of the new locally transmitted cases and imported cases in managed isolation quarantine facilities.

Authorities are testing at Americold's warehouse for Covid-19, but New Zealand Prime Minister Jacinda Ardern emphasized that the most likely cause of the outbreak was human to human transmission.

"We are wanting to rule everything out," she said.

Los Angeles is "making good progress" and has seen success over the past three weeks in response to the coronavirus pandemic, Mayor Eric Garcetti announced in a news conference on Wednesday.

According to Garcetti, there are fewer coronavirus cases, deaths, hospitalizations, a lower positivity rate, and stable and strong hospital bed availability in Los Angeles hospitals.

“We are making progress. We are making good progress, Los Angeles,” Garcetti said. “Our success over the last three weeks is real. It’s tangible and it’s reflected in our numbers.”

The mayor attributed the drop in new infections and deaths to the wearing of face masks, washing hands, maintaining physical distance from others, and staying home, calling these actions “sacrifices to protect one another.”

The rate of transmission for Los Angeles County has dropped to 0.86 from 0.91 last week, Garcetti said.

While the Covid-19 threat level in Los Angeles still remains at “orange” -- the second highest level meaning residents should minimize contact with anyone outside of their households -- Garcetti said the past few weeks have made a difference and there are no plans to move forward with any further closures or restrictions.

Electronic reporting system issues: Garcetti confirmed that a fraction of the case data numbers from a backlog has been received. He also warned that case numbers may increase once the county receives the backlog of data.

“These things work and they are working to drive down the curve.”

New Zealand health officials said Thursday they had identified 14 new coronavirus cases as the country tackles a fresh outbreak that ended a run of more than 100 days without any locally transmitted infections.

Officials also warned they were likely to find more cases.

“We are fully expecting there will be further cases,” New Zealand’s Director General of Health Dr. Ashley Bloomfield said at a news conference Thursday.

"As we all learnt from our first experience with Covid, once you identify a cluster it grows before it slows. We should expect that to be the case here," she said

All but one of the cases are locally transmitted, and are connected with four confirmed cases in Auckland, the country's most populous city. The other case is a woman in managed isolation who recently entered the country from the Philippines.

Of the 13 cases that are locally transmitted, three patients are employees at Americold, a cool storage facility where one of the previously reported cases worked. Seven of the cases are family members of Americold employees.

One school student also tested positive for the virus, Bloomfield said. The student is a close contact of one of the four cases reported on Tuesday.

What's happening in New Zealand: On the weekend, the country -- which has been held up as an example of how to combat the virus -- marked 100 days without any locally transmitted infections.

But that streak came to an end this week. On Tuesday, New Zealand announced four new locally-transmitted cases -- and on Wednesday, Auckland went into a level 3 lockdown for three days.

Parliament was set to be dissolved Wednesday ahead of the country's national election in September, but it was postponed. Ardern hasn't announced whether she will postpone the election, which is scheduled for September 19.

The White House released eight new recommendations for US schools as they prepare to reopen -- but the recommendations are little more than basic hygiene tips and don’t outline what to do if they face coronavirus cases in their halls.

The broad recommendations are similar to coronavirus mitigation efforts across the country, and not particularly specific to schools.

The “general recommendations for all schools,” which were released at President Donald Trump’s daily coronavirus news conference, focus on what students and teachers should do to attempt to keep people safe as they return to the classroom.

The President said one of the reasons he wants students to return to school is because there are very few fatalities in younger Americans.

"College age students also continue to be one of the lowest risk demographics," Trump claimed. He also claimed that most Covid-19 deaths "occur in people over 24 years of age."

This new list released by the White House echoes much of what the Centers for Disease Control and Prevention included in its guidelines for reopening schools, which do contain additional details.

Trump also said CDC teams can be deployed to schools that need assistance with their reopening plans.

Earlier on Wednesday, adviser to the President Kellyanne Conway said that despite the resources the federal government will provide, the decision to reopen schools will still need to be made at a local level.

“We’re the federal government. We’re not telling school districts what to do. We’re providing guidance and resources,” Conway said.

US President Donald Trump claimed Wednesday that the federal government will provide up to 125 million masks to school districts around the United States.

“Today I am pleased to announce that we will provide up to 125 million reusable masks to various school districts around the country,” Trump said during a White House press briefing. “My administration also stands ready to deploy CDC teams to support schools that are opening and schools that need help in safety and in order to safely reopen.”

The announcement comes amid a push by the Trump administration to reopen schools around the country.

France has recorded its biggest jump in daily Covid-19 cases since around the time it began to ease its lockdown.

The French Health Ministry on Wednesday reported an increase of 2,524 Covid-19 infections in 24 hours.

This is the biggest single-day increase in coronavirus cases since May 6, five days before France eased lockdown restrictions.

This rise comes after French Prime Minister Jean Castex said Tuesday that the coronavirus situation in France has been "trending in the wrong direction."