Despite the increase in cases, protesters are still taking to the streets in opposition to the government's decision to delay presidential elections.

Bolivia is currently being run by an interim government that formed after longtime President Evo Morales stepped down late last year. Elections have been postponed twice this year due to Covid-19.

Morales, who was in power for nearly 14 years, resigned last year following allegations of "serious irregularities" during presidential elections. He denied the allegations and declared himself the winner, but was forced to step down and leave the country.

He claimed the accusations against him are part of a coup by right-wing politicians and the armed forces, but his opposition maintains they are fighting for democracy and peace.

Another 42,048 Covid-19 cases and 571 virus-related deaths were reported on Sunday in the United States, according to Johns Hopkins University's tally of cases.

At least 5,403,361 coronavirus cases have been identified in the US since the pandemic began. At least 170,052 people have died.

Those figures include cases from all 50 states, the District of Columbia and other US territories, as well as repatriated cases.

The capital Tokyo reported 260 new cases on Sunday, 142 of which could not be traced, according to the Tokyo Metropolitan Government. It was the fifth day in a row that Tokyo has recorded more than 200 cases.

Chauhan, 73, was Minister for Youth and Sports in the northern state of Uttar Pradesh. He tested positive for Covid-19 at a hospital in Lucknow on July 12 and was later transferred in critical condition to a hospital in Delhi.

"Deeply pained at the demise of UP Minister and former Cricketer Chetan Chauhan Ji. My condolences to his family and well-wishers," tweeted Mukhtar Abbas Naqvi, India’s Minister of Minority Affairs.

Chauhan, an opening batsman, played for India in 40 test matches and seven one-day internationals between 1969 and 1981, scoring a total of 2,237 runs, according to the International Cricket Council.

He is the second minister from Uttar Pradesh to die following complications from Covid-19. Former Uttar Pradesh Minister for Technical Education Kamla Rani Varun died of coronavirus at a hospital in Lucknow on August 2.

India has recorded at least 2.6 million Covid-19 cases, including more than 50,000 deaths, according to the Health Ministry.

The number of people who have died from Covid-19 in India topped 50,000 on Monday, according to the country’s Ministry of Health and Family Welfare.

The latest figures released by the ministry show the number of deaths rose by 941 over the past 24 hours, bringing the total to 50,921.

Only the United States, Brazil and Mexico have identified more Covid-19-related fatalities, according to data from Johns Hopkins University.

Since the pandemic began, India has recorded at least 2.6 million cases. Of those, 676,900 are considered active. About 1.9 million people have recovered.

In India, not all patients require a test to be considered recovered. Patients with mild and moderate symptoms are considered no longer active after 10 days of symptom onset if they meet certain conditions, and a test to confirm that they no longer have the virus is not required. However, severe cases can only be discharged after one negative coronavirus test.

New Zealand has postponed its general election for four weeks over coronavirus concerns -- despite only having 58 active cases in the community.

The country of 5 million people -- which has been praised for its handling of the virus -- went 102 days without any locally-transmitted cases, only to see a fresh outbreak last week.

The election had been scheduled for September 19, but on Monday, Prime Minister Jacinda Ardern announced she was delaying it until October 17. This year, New Zealand will also be holding two referendums alongside its election: on legalizing euthanasia, and on legalizing cannabis for recreational use.

Several developed countries have gone ahead with their elections during the pandemic, including South Korea, which even saw its highest turn out in almost 30 years during its parliamentary election in April.

Why has the election been delayed? Ardern said she wanted to postpone voting to give the Electoral Commission time to prepare -- and give parties time to campaign.

New Zealand’s most populous city, Auckland, is currently under lockdown, meaning any candidates based there would be unable to campaign as usual.

Most people within New Zealand must vote at specific locations, although they can apply to vote by mail. Voting opens two weeks before Election Day, so not everyone needs to vote on the same day.

Will this help Ardern’s chance? According to polling, Ardern's Labour Party is on track to win the election -- and is well ahead of the main opposition National Party.

The delay will give her opponents more time to attempt to win support. But, if the polls are anything to go by, they have a lot of ground to make up.

Has there been any pushback? Not really. Other parties pushed for the election to be delayed, and following Ardern's announcement, several parties welcomed the decision.

"The main thing is, we can't have a fair election with no public meetings, two referenda being voted on, people not able to actually put their views on that without actually being able to have those public meetings," said Judith Collins, leader of the National Party, in an interview with national broadcaster Radio New Zealand.

Authorities in South Korea are pursuing legal action against the pastor of the Sarang Jeil Church in Seoul after 315 people connected to the parish tested positive for Covid-19.

A criminal complaint was filed Sunday against the church's leader, Rev. Jun Kwang-hoon, accusing him of holding gatherings in violation of the city's infectious disease prevention law.

Of 4,066 people who authorities have identified that visited the church recently, 1,045 could not be contacted -- 550 did not have listed addresses and 495 did not pick up their phones, the city government said. Of those that have been traced, 1,207 have been tested for the virus. The rest are awaiting testing.

Authorities in Seoul said that all 7,560 churches in the South Korean capital are barred from holding any gatherings due to the pandemic except for the usual weekly services, during which worshippers must abide by social distancing regulations.

Church's denial: At a news conference Monday, Sarang Jeil Church's legal team denied the allegations of wrongdoing levied against the church and Rev. Jun. The church's representatives claimed that they had fully cooperated with the authorities and said they would be suing the government for defamation.

The government of the Australian state of New South Wales apologized on Monday for allowing thousands of passengers to disembark from the Ruby Princess cruise ship in March, despite Covid-19 fears.

The Ruby Princess was given permission in March to dock and offload its passengers in Sydney despite widespread concerns over the spread of coronavirus after some passengers displayed flu-like symptoms.

On Monday, the government said in a statement that it has taken steps to ensure the errors are not repeated.

“The NSW Government extends its heartfelt apology to anyone who experienced any additional hurt, stress and trauma due to the mistakes made by NSW Health,” it said.

A special commission of inquiry found that 663 passengers from the ship subsequently tested positive for the novel coronavirus, while 28 Covid-19 deaths were associated with its passengers.

New South Wales Premier Gladys Berejiklian also apologized, saying: “I recognize the hurt and suffering these mistakes caused, and I apologize for that.”

“These issues occurred during an extraordinary time of great uncertainty, and as we navigate this pandemic we will continue to learn from mistakes and where we could have done better,” she added.

The world's third-largest economy shrank 7.8% in the second quarter compared with the previous quarter, the country's Cabinet Office said on Monday. That translated to an annual rate of decline of 27.8%, the worst since modern records started in 1980 and the third consecutive quarter of contraction.

Consumption, which accounts for more than half of Japan's economy, slumped 8.2% for the quarter as businesses across the country shuttered during a six-week national emergency in April and May.

External demand shaved three percentage points off GDP on the quarter as global trade dried up.

"The lack of coherent policy response is really frightening. We need a wise, cautious and broad response to this terrible situation. It is exactly what (Prime Minister) Abe and Company lack when it comes to the way they are going about things," said Noriko Hama, a professor at Doshisha Business School -- part of Doshisha University. 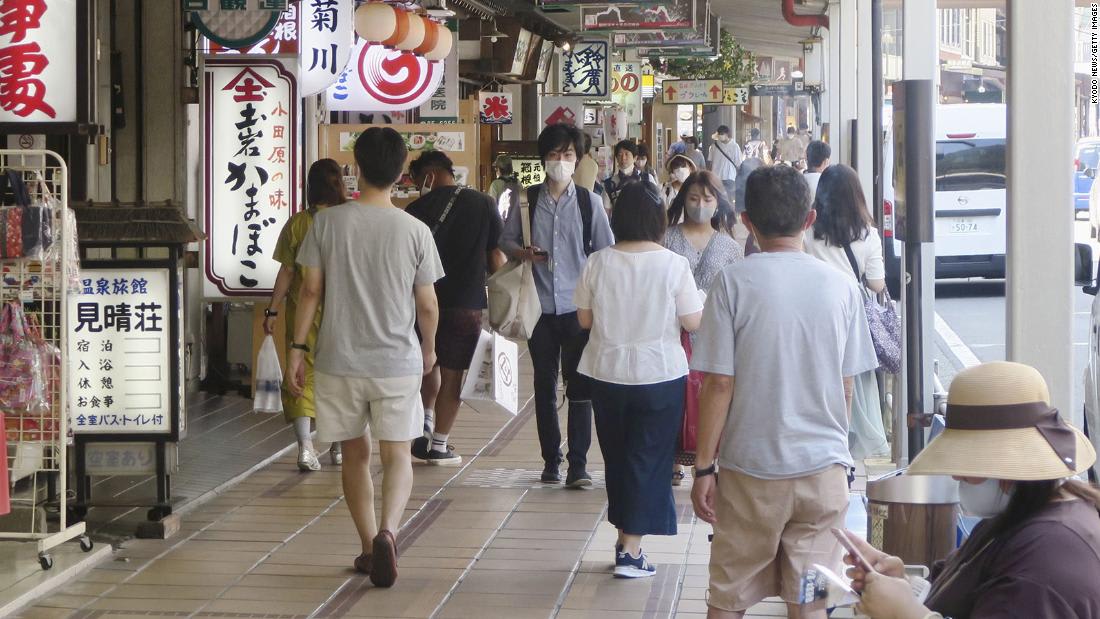