The inquiry was launched amid allegations that a fresh coronavirus outbreak in the state of Victoria was sparked by some contracted workers not following protocols at hotels used to quarantine international arrivals.

A nurse contracted to work in three quarantine hotels, identified only as "Jen," told Thursday's hearing there were serious questions over the nursing staff’s training and experience to handle mental health issues among the returning travelers.

Suicide threat allegedly dismissed: In one incident, Jen said she followed up with the Department of Health and Human Services -- which ran the quarantine program -- to see if they were aware of a situation in which a guest was threatening suicide.

“At that point a person who worked for DHHS told me that they had specifically called this guest in their room and told them that they need to stop threatening suicide just so they can get a cigarette,” she said at the hearing.

Jen said she tried to reach the guest via phone but couldn’t get through. When she went to check on the guest they were found to be unharmed but in an “anxious” state.

The employment agency that contracted staff, Your Nursing Agency (YNA), denies the allegation that staff were not trained to deal with mental health issues, and said that all of the mental health nurses provided by YNA Mental health were certified.

Lost and ripped up documents: Jen said that inadequate record keeping by DHHS meant travelers were not being tracked properly and she resorted to using her own spreadsheet to document who was staying in the hotel.

In one instance, a family had been in quarantine for a week without being contacted for a welfare check, she said.

“It was very obvious that DHHS were having a hard time of keeping track of who is in the hotel and when,” she told the inquiry.

She said that she had made complaints after finding documents ripped up.

The inquiry on Thursday also heard testimony from a second nurse and a returning traveler. Hearings will continue this week.

Five new locally transmitted cases have been reported in New Zealand according to the country's Director-General of Health Dr. Ashley Bloomfield on Thursday.

"The source of this current larger community cluster still remains open," he said.

Mystery over outbreak: 80 Covid-19 infections have been linked to the latest community outbreak, but authorities are investigating two cases where they have found no link to the original cluster in Auckland.

One of the cases of unknown origin is a maintenance worker from a managed isolation facility at a hotel in Auckland. The other was thought to have links to the original cluster but is now under investigation.

Health officials in Auckland have found a link to another positive case who used the same elevator as the maintenance worker.

Separately, the virus levels detected in the Americold workplace environment -- an American temperature-controlled warehouse company that has had several employees test positive -- and on packaging there was too low to be tested for genome sequencing.

"At the border nationwide, 7,649 workers have been tested at the airport and ports, all of them so far coming back negative," New Zealand Health Minister Chris Hipkins said.

Almost all of the staff at the managed isolation facilities in Auckland have been tested -- 2,891 of 2,900 all tested negative barring the one maintenance worker.

With one comment, Australian Prime Minister Scott Morrison managed to turn a positive coronavirus story into a public relations disaster, and highlighted the potential next nightmare of the pandemic: a fight over vaccines.

Speaking about a plan to provide free coronavirus immunization to all Australians as soon as that is possible, Morrison said Wednesday that he would "expect it to be as mandatory as you could possibly make it," with some exemptions on medical grounds.

His health minister, Karen Andrews, reiterated that line later, saying the government was "looking at it being a mandatory vaccine." But by Wednesday evening, Morrison was already backtracking, telling radio station 2GB that "it is not going to be compulsory to have the vaccine ... there are no compulsory vaccines in Australia."

Morrison's reversal came after his original comments had been seized on by anti-vaccination groups in Australia and around the world, many of which have long warned of supposed plans to force a coronavirus jab on people.

While his comments created something of an open goal for anti-vax campaigners, the scandal does point to the wider issue of "vaccine hesitancy," which the World Health Organization identified last year (before the coronavirus pandemic hit) as one of the top 10 threats to public health around the globe.

It should concern everyone. Without an effective coronavirus vaccine, there currently appears to be no other viable way to return to pre-pandemic normality. 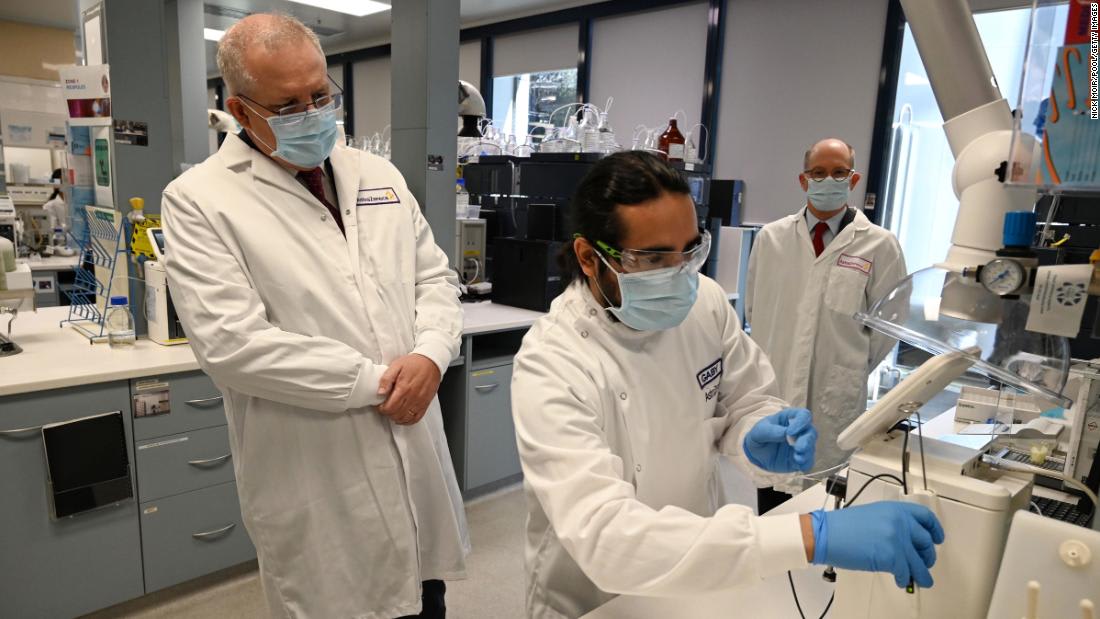 Brazil’s President Jair Bolsonaro said on Wednesday he might extend emergency payments through the end of the year for the unemployed, but the payments will be at a lower rate than the current 600 reais ($108) a month.

The latest official figures on unemployment show that a total of 8.9 million people lost their jobs as the coronavirus pandemic swept through Brazil -- representing the sharpest contraction on record for the country.

Brazil's unemployment rate rose to 13.3% for the quarter ending in June.

Bolsonaro said continuing with 600 reais a month is not an option because it would plunge Brazil into debt, hurting the country's fiscal credibility.

“This is not the people's money, this is indebtedness, and if the country becomes over-indebted, it ends up losing its credibility,” Bolsonaro said.

Brazil’s Economy Ministry talked about decreasing the amount to 200 reais ($36) a month, Bolsonaro said, but the President said he thinks the amount is too low and suggested they strike a deal somewhere in the middle.

“It is possible to reach a middle ground and we will seek to extend it for a few more months, perhaps until the end of the year,” Bolsonaro said.

Meanwhile, the economy minister Paulo Guedes said the economy is recovering in the shape of a Nike “swoosh.”

"All the indicators show the drop was sudden, rough and strong, but Brazil is coming back,” he said.

CNN’s map is tracking the cases in the US:

Chinese health officials have said that no patients hospitalized due to Covid-19 in China have died in "almost four months."

Guo Yanhong, an inspector of China's National Health Commission, lauded the Chinese strategy in containing the spread of the virus saying, "This is the strongest proof that China's experience, methods, and strategies in treating critical patients are valuable."

He made the comments at China's Joint Prevention and Control Mechanism of the State Council on Wednesday.

The last time a virus death was reported by the NHC was April 14, when one fatality in Hubei province was recorded, according to data on its website.

Latest cases: On Wednesday, 22 imported cases and one locally transmitted asymptomatic infection were reported in the country, NHC figures showed. In addition, seven new imported cases were also recorded on Wednesday in the provinces of Jiangxi, Tianjin, Shanghai, Shandong, and Sichuan.

Dr. Anthony Fauci, the US' top infectious disease doctor, told CNN on Wednesday that Phase 3 clinical trials for coronavirus vaccines should aim to include minorities at levels that are at least double their representation in the population.

So far, that’s significantly higher than the participation levels of minorities in the trial being run by Moderna, the first US company to start a Covid-19 vaccine trial.

The data: According to Census data, Black people represent 13% of the US population. Doubling that would mean 26% of participants should be Black for the trial.

But so far, Black people represent only 4.5% of Moderna’s study participants, according to data obtained by CNN.

Census data show Latinos represent 18% of the US population, and doubling that would mean 36% of participants should be Latino for the trial. However, only about 10% of Moderna’s trial participants are Latino.

Importance of minority representation: Fauci made clear these levels are goals, not requirements. But sufficient numbers of minorities are crucial in order to determine safety and efficacy for these groups, which are disproportionately affected by the virus in the US.

Fauci said participation of minorities in the trials should “aim to match the burden of disease. We’d like to do that -- whether or not we get there I don’t know.”

A South Korean religious group at the center of a new coronavirus outbreak has been accused by the government of withholding key information and obstructing public health authorities in their fight against the pandemic.

It's the latest clash between a religious group and the government of President Moon Jae-in, who is attempting to stem South Korea's coronavirus outbreak while fighting off accusations he is curbing religious freedom.

What happened: The new outbreak has been linked to the Sarang-jeil Church in Seoul, which has reported hundreds of positive cases among its members, some 400 of whom have yet to be traced by the authorities.

Official reaction: Moon's government on Tuesday announced a ban on all religious gatherings in churches in Seoul and the surrounding metropolitan areas, in a move that provoked immediate pushback from conservative religious groups.

Police in the capital have been enlisted to help identify and track individuals connected to the church, with the government acutely aware that time is of the essence to contain the spread and enable contact tracing.

While Jun and his church have attracted some sympathy from opponents of President Moon and conservative religious groups, his actions, along with photos of him sitting in the back of an ambulance after testing positive, wearing his mask like a chin strap, have sparked fury from others online.

Religious freedom: Underlying the latest controversy is the widespread suspicion many conservative religious groups have of President Moon, a liberal who has faced growing opposition from the right in recent months.

"There is a tendency among some more conservative churches that the Moon government is against religious freedom," said Professor Tark Ji-il of Busan Presbyterian University, adding that there was "tension and conflict" between many churches and the authorities. 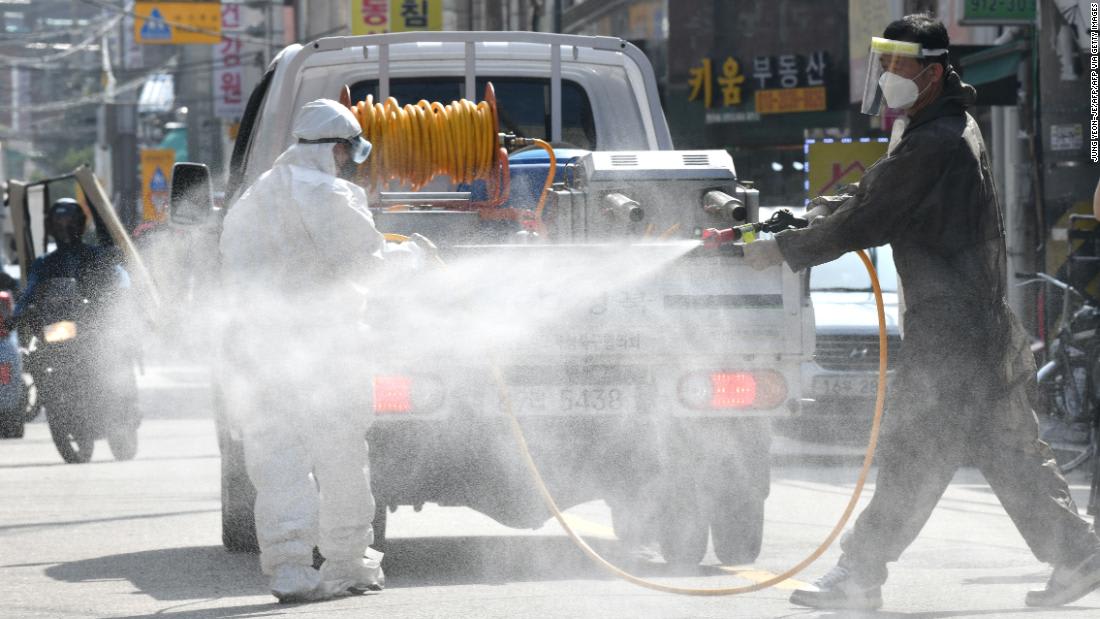