As US colleges and universities try to settle into the fall semester, coronavirus cases continue to rise leading some institutions to cancel in-person instruction and implement strict rules to control the virus.

Universities in at least 19 US states have reported outbreaks, despite health protocols on campus. Many outbreaks are tied to large group gatherings like parties, leading some schools to suspend students and organizations for breaking social distancing rules on and off campus.

"Violations to our health and safety protocols, both on and off campus, are subject to harsh disciplinary action, up to and including suspension from UA," Bell wrote in a letter to the campus community on Sunday. 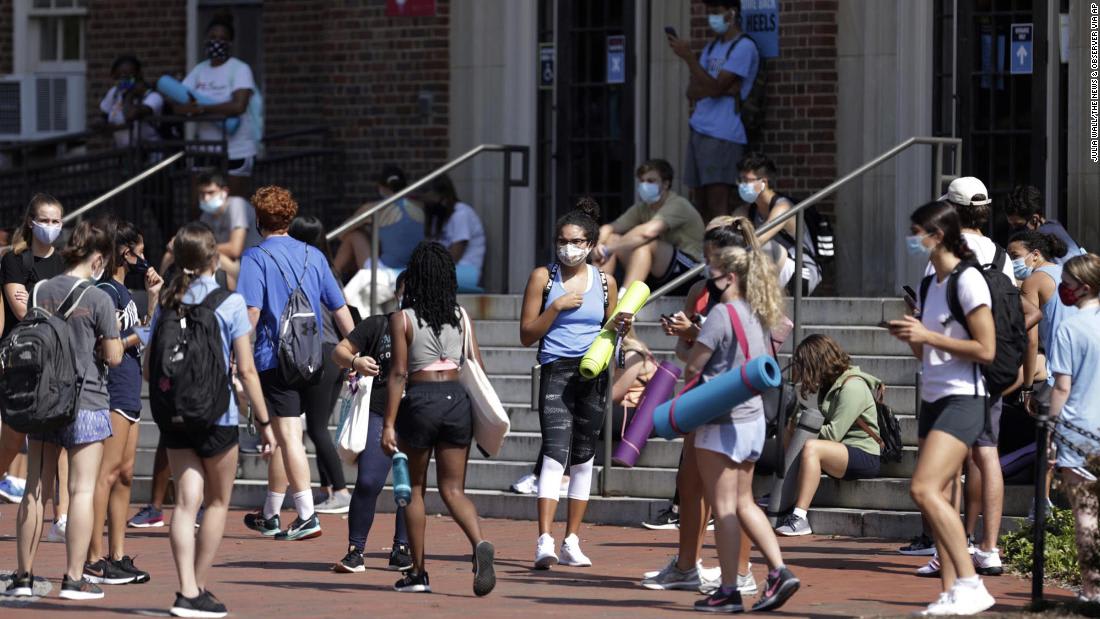 Even before the coronavirus pandemic ignited global conversations about hygiene, there was one part of an airplane that nobody wanted to touch -- the bathroom door.

That's why Japanese airline ANA is testing a new hands-free bathroom door that passengers can open with their elbow or forearm.

One of the challenges of designing anything for an airplane is the lack of space. Lavatory doors open inward (less aisle blockage) or have small, flat handles instead of doorknobs.

But what you'll see on ANA's prototype is something that is hygienic but also conserves space: The familiar silver latch lavatory door handle now has a spring attached to it so that you can open it by pressing in instead of by pulling out.

Inside the bathroom, the locking mechanism looks pretty familiar, with a button you slide from one side to the other. A larger sized button can also be locked and unlocked with your elbow, meaning you can have a completely hands-free door both inside and out.

Currently, the door prototype is only available in ANA's lounge at Tokyo's Haneda Airport, where the company is gathering feedback on it through the end of August. If the design proves popular and easy to use, it could get more widespread use. 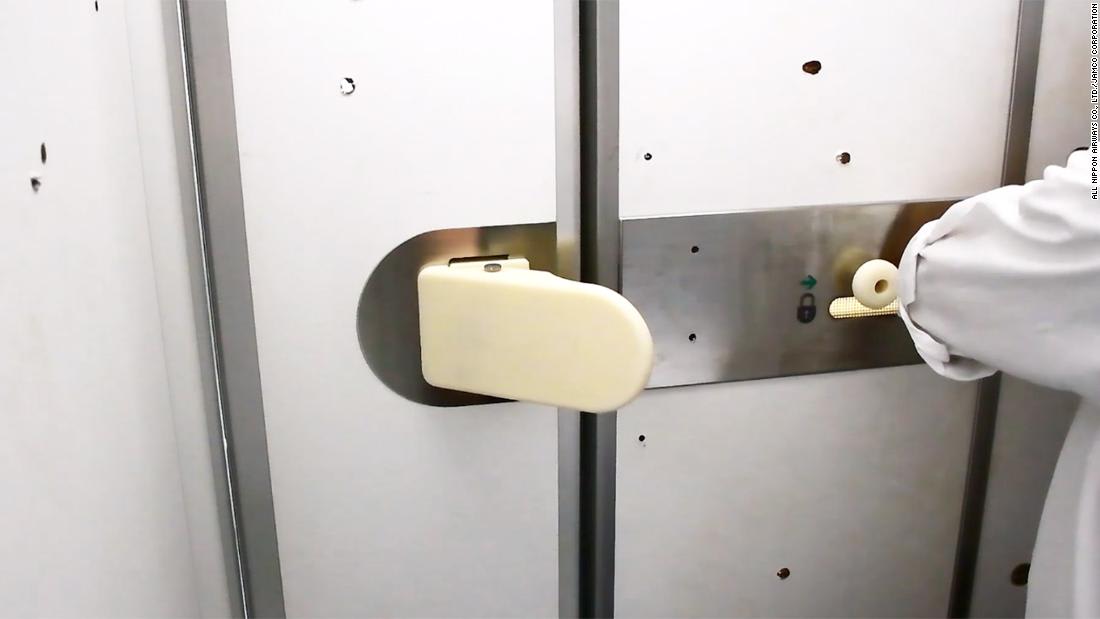 The national total for coronavirus infections is now 63,219, according to the government. Five new deaths were reported on Sunday, bringing the total death toll to 1,194.

Among the new cases, 212 were reported in Tokyo. According to the city government, 51% of the new cases on Sunday were identified in patients aged in their 20s and 30s.

New Zealand’s Prime Minister Jacinda Ardern announced on Monday that level 3 coronavirus restrictions in Auckland will be extended until Sunday, August 30, after the country reported eight new cases on Monday.

“The Director-General (of Health) has recommended to cabinet, and cabinet has agreed to apply a short extension of level 3 restrictions in Auckland till 11:59 p.m. this Sunday 30 August,” Ardern said in a news conference.
“This is a contained cluster, but it is our biggest one, that means the tail will be long and the cases will keep coming for a while to come.”

Ardern said Auckland, the country’s most populous city, will move down to a modified alert level 2 setting after the extended period of level 3 restrictions ends on Sunday.

The rest of New Zealand will continue to remain at level 2 restrictions. The current restrictions with Auckland at level 3 and the rest of the country at level 2 were originally set to be lifted at midnight on Wednesday.

"Our ongoing goal is to maintain our elimination strategy while trying to reduce the impact on as many people and businesses as possible," Ardern said.

“In our fight against this virus, we have held some records, now the one we have to beat is around resurgence, and if any one country knows how to bounce back it is us."

Ardern also announced that use of masks or face coverings will become mandatory on public transport in alert levels 2 or above starting from next Monday.

What the restrictions mean: Under level 3 restrictions, public venues such as museums, cinemas, food courts, gyms, pools, playgrounds and markets will remain closed. People must stay within their immediate household bubble, but can expand this to connect with close family, bring in caregivers or support those who are isolated.

Under level 2 restrictions, no more than 100 people can gather in one place at a given time.

Another 266 Covid-19 cases were recorded in South Korea in the past 24 hours, the vast majority of which were locally transmitted, the Korea Centers for Disease Control and Prevention (KCDC) said today.

Among the local cases, 201 were reported in Seoul. This brings the nationwide total to 17,665 cases, while the death toll remains at 309.

Senior Health Ministry official Yoon Tae-ho said today there is a high risk of a larger outbreak, as about 20% of last week’s cases were untraceable.

The Seoul city government also announced today an anonymous Covid-19 testing option for people who do not wish to reveal their identity. They can now take a test by providing a valid phone number without having to disclose other personal information, authorities said.

At least 15 partygoers who were arrested for attending an unauthorized party in Lima, which ended in a deadly stampede, have tested positive for coronavirus, Peru's Health Ministry said Sunday.

The country's Minister of Interior Jorge Montoya said police had arrested the owners of the club where 13 people were killed on Saturday, Peru’s official news agency Agencia Andina reported.

Three others were injured in the stampede, when partygoers attempted to escape a police raid on the venue, according to Orlando Velasco Mujica, general of the Peruvian National Police.

Police were called to the Thomas Restobar in the Los Olivos district of Lima on Saturday evening to shut down an illegal party that more than 120 people were attending.

The total number of cases reported in Victoria is now 18,330, Andrews said.

The state has been under a tight lockdown, including an 8 p.m. curfew, since a new outbreak in July which quickly spread to thousands of people.

Andrews said that 15 new coronavirus deaths were reported on Sunday, raising the state-wide death toll to 430. All the new deaths were linked to outbreaks in aged-care facilities.

The Premier said 629 Victorians remain in hospital, of which 31 are receiving intensive care.

Mexico’s President Andres Manuel Lopez Obrador said the pandemic “is losing steam” in a YouTube video Sunday, adding that there are now enough hospital beds for the sick.

"When the pandemic began, that was our main concern. Now we have Covid-19 hospitals, we only have 37% of beds occupied in general hospitalization," Lopez Obrador said.

Mexico has reported the third-highest number of coronavirus cases in Latin America, behind Brazil and Peru.

New Zealand recorded eight new coronavirus cases in the past 24 hours, seven of which were locally transmitted, the country's top health official announced on Monday.

The total number of confirmed cases in New Zealand now stands at 1,332. No new deaths were recorded in the past 24 hours, leaving the countrywide death toll at 22.

All seven of the new local cases were linked to the existing cluster in Auckland, New Zealand’s Director General of Health Dr. Ashley Bloomfield said at a news conference. He added that one imported case was also reported.

Bloomfield said 4,589 coronavirus tests were conducted on Sunday, bringing the total number of tests administered across the country to 697,070. Nearly 100,000 tests have been conducted in the past week, according to Bloomfield.

Lockdown decision: The new cases come as New Zealand’s Prime Minister Jacinda Ardern is set to make a decision later today on whether to extend coronavirus restrictions in the country, after they were reimposed on August 14 following the new outbreak.