CNN's coverage of the coronavirus pandemic has moved here.

The New York Philharmonic was stuck in traffic.

It was late afternoon on a Friday, and the red, white and black Ford F-250 pickup truck at the heart of the Philharmonic's new "pull-up" concert series was traveling at speeds familiar to anyone who has ever tried to cross a few miles worth of Brooklyn during rush hour.

It has been more than five months since the New York Philharmonic, the nation's oldest symphony orchestra, closed the doors to its famous Lincoln Center concert hall in early March, as the coronavirus pandemic started to take hold of the city. In that time, over 23,000 New Yorkers are suspected to have died from Covid-19. Told to close their doors in the spring, many city stores, restaurants and museums remain shuttered.

"We like to think of the Philharmonic as New York's orchestra," said orchestra president Deborah Borda, a violinist. "Our musicians, their life is making music. They have been completely cut off from being able to give their gift to people." 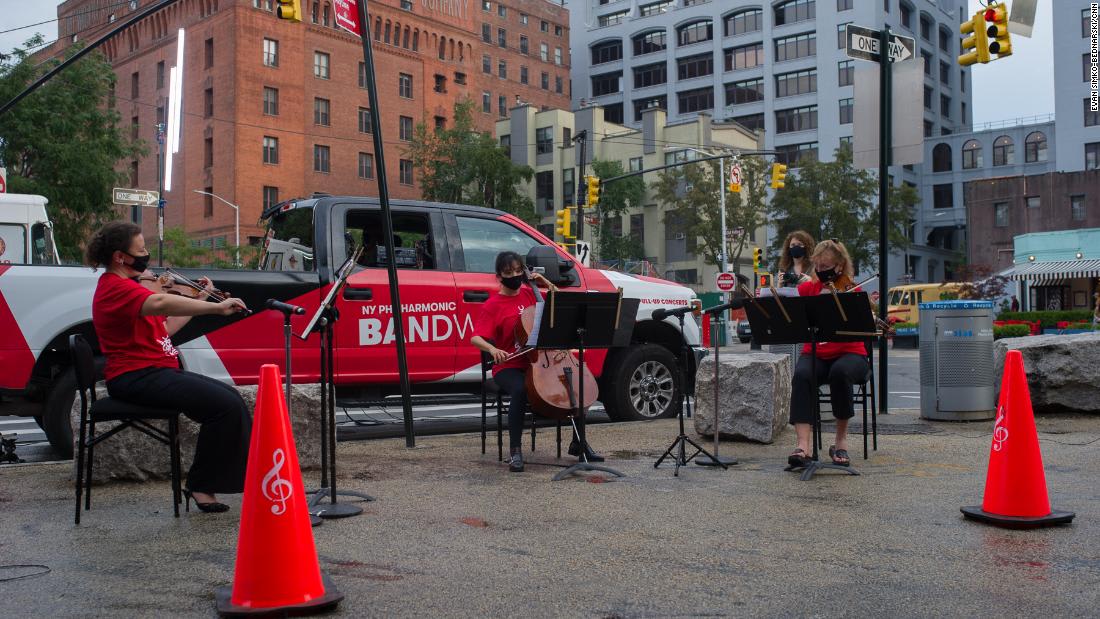 Unable to open its concert hall, New York Philharmonic brings its music to the streets

A venue in Millinocket, Maine, that is tied to a Covid-19 large outbreak says it made an error when interpreting the US state’s rules on social distancing.

At least 87 people who attend a wedding reception at the Big Moose Inn have since tested positive for the novel coronavirus.

“We understood that there could be no more than 50 persons in our largest room. We did make an error in the interpretation of that rule. Our interpretation was that we could take a wedding party of more than 50 persons, and split them between two rooms as long as it didn’t exceed our total capacity or a specific room’s capacity,” the venue said in a statement. “The state -- perhaps, rightfully so -- assumes that individuals from a larger group would ignore the room restrictions, and take the opportunity to co-mingle. Our interpretation of the rule put the Big Moose Inn in violation of the gathering of people over the maximum number allowed by Maine DECD guidelines.”

The Big Moose in said that it screened all wedding guests prior to entering. Once it was made aware of the outbreak, the venue began taking precautions to protect its staff, requiring them to be tested or undergo self-quarantine. None of the servers working that evening have tested positive.

"While we cannot be sure the virus was fully spread at our facility, we know that there are things that we can be doing better," the statement read.

Marie Delus had not touched her mother since she took her to a New York City emergency room in March.

But after more than five months in hospital and a nursing home, Delus' mother, Marie Jean-Pierre, was released on Saturday, her family told CNN.

Jean-Pierre, 73, was admitted to Maimonides Medical Center in Brooklyn on March 21 with a low-grade fever and difficulty breathing. After testing positive for coronavirus, she was intubated and later placed on a ventilator, according to her daughter. At some point, she received a tracheotomy.

Jean-Pierre, Delus and other family members had traveled to Spain in early March on a once-in-a-lifetime trip, returning on March 11. Multiple people who went on the trip became ill, with five becoming "very sick," Delus said.

Jean-Pierre was "out of it," remembering little of almost three months in the hospital, she told CNN. She was transferred to Brooklyn's Saints Joachim and Anne Nursing and Rehab Center, where she had to relearn how to walk and talk, and was unable to see her family, except from behind glass, Jean-Pierre said. 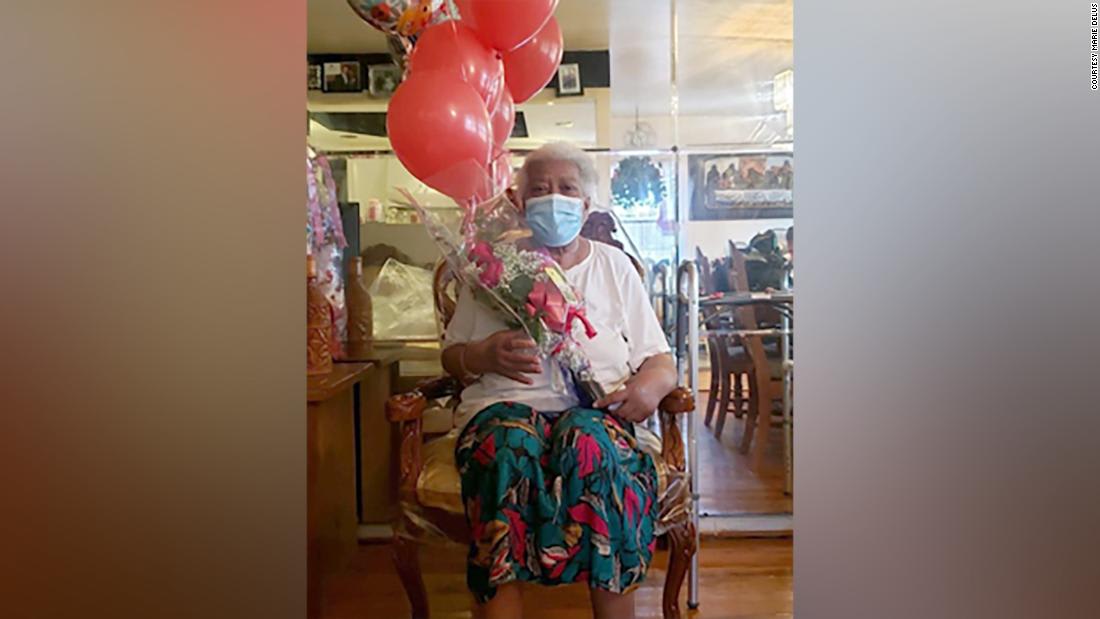 Great-grandmother beats coronavirus after five months in hospital and rehab

In a letter dated Saturday to the International Monetary Fund, Costa Rica's government formally requested financial assistance for roughly $1.75 billion to "support our ongoing efforts to respond to the Covid-19 pandemic."

"We are writing to request, on behalf of the Republic of Costa Rica, follow-up financial assistance from the International Monetary Fund in the form of a three-year arrangement under the Extended Fund Facility, with access at 335 percent of quota (about USD 1.75 billion)," wrote Rodrigo Cubero, the president of the country's central bank, and Elian Villegas, minister of finance.

The letter cites the "combined impact of the global shock and domestic containment measures" as factors in their decision to request the funding, and goes on to state that the country’s "Central Bank now projects GDP to decline by 5 percent this year."

More than 700,000 people have tested positive for coronavirus in the state of California as of 6:45 p.m. Saturday, according to the Johns Hopkins University Covid-19 tracker.

A total of 701,399 people have tested positive and 12,865 people have died in California, according to JHU.

Brazil has confirmed 41,350 new Covid-19 cases and 758 deaths in the past 24 hours, the country’s health ministry reported Saturday.

At least 120,262 people have died in Brazil from coronavirus, according to the ministry’s data. The total number of confirmed Covid-19 cases now stands at 3.84 million.

Brazil trails only the United States in terms of the highest number of coronavirus infections and deaths in the world, according to data compiled by Johns Hopkins University.

Providence College has placed 17 students on "interim suspension" for violations of the school's Covid-19 policies, college spokesman Steven Maurano told CNN Saturday. Maurano said he did not know the specifics of what the students did to merit the discipline.

"'Interim suspension' means that these students are not allowed on campus until their disciplinary hearing," Maurano said, adding that most hearings take place within 72 hours. "During their suspension, they cannot attend classes in person or participate in any campus activities."

Classes at the college in Providence, Rhode Island, are scheduled to begin Monday.

Violations of the school's pandemic measures "will not be tolerated," the Rev. Kenneth R. Sicard, the college's president, said in an open letter to the college community on Friday.

I am deeply disappointed by the selfish behavior of these students who defiantly chose to ignore our Covid-19 Code of Conduct," Sicard wrote. "This disregard for clearly defined protocols jeopardized the health and safety of others in our campus community."

"While I find no joy in having to endorse such strong sanctions, I know they are necessary if we are going to have a successful fall semester," he wrote.

President Donald Trump’s staff attempted to keep roundtable participants at a distance as a precaution at the end of a briefing on Hurricane Laura in Lake Charles, Louisiana.

After the event wrapped, Trump called some of the participants up to him so he could sign something for them.

While some people were masked, others were not. John McEntee, director of the Presidential Personnel Office, along with White House chief of staff Mark Meadows and the President's Secret Service detail jumped in to make sure that everyone was keeping their distance from Trump.

As the roundtable attendees approached Trump, McEntee got in the middle and said, "We got to just keep a little…" with his hand outstretched to keep a buffer between the attendees and the President. Meadows was then heard saying, "Guys, if you will, try to just keep your distance."

A third, unidentified voice could be heard asking someone to put their mask on.

While Trump seemed to be fine with inviting these people up to be close to him, his staff were clearly uncomfortable with having the President too close to anyone else, whether they were wearing a mask or not.

CNN has asked the pool traveling with the President to inquire as to whether the roundtable attendees were tested before Trump arrived.