A White House coronavirus task force report sent to officials in Iowa this week warns of dire new case increases across rural and urban areas of the state and calls for a mask mandate, the closure of bars and a plan from universities as the pandemic intensifies in the Midwest.

CNN has obtained the nine-page Aug. 30 report for the state, first reported by the Des Moines Register, from the Iowa Department of Public Health. The task force releases state-by-state reports each week to governors' offices, and has so far declined to make them publicly available.

The report says that Iowa is in the task force-defined "red zone" and warns that the state has the highest rate of cases in the US, which increased by 77.4% from the previous week.

The report offers recommendations to Iowa, including:

The three counties with the highest numbers of cases also have large student populations, including Iowa State University in Story County and the University of Iowa in Johnson County, as well as Polk County, which contains Iowa's largest metro area, Des Moines.

The report comes less than two weeks before Iowa State University will welcome crowds to its stadium for its season opener football game. Though social distancing will be observed, a letter from the school's athletic director estimated "there will be approximately 25,000 fans at the first game." The task force report suggests red zone counties should limit gatherings to 10 or fewer people.

Here is a look at how the percentage of new positive tests have grown over time in the state, according to data from the Covid Tracking Project: 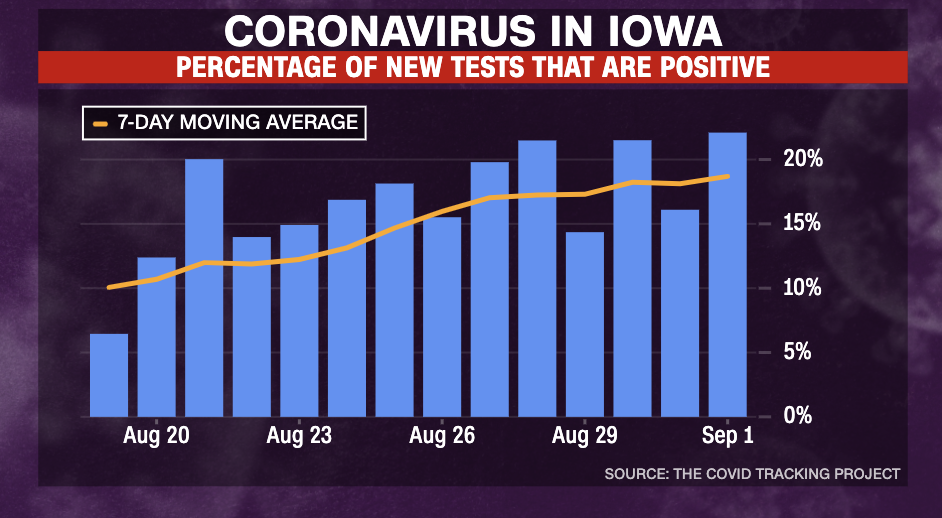 The ADP employment report released today was worse than expected, as just 428,000 jobs were added last month. Economists had predicted 950,000 new jobs in the private payrolls report for August.

The report showed that large companies had the strongest job gains with the leisure and hospitality sector adding 129,000, the most of any. The spring lockdown decimated the industry as hotels and restaurants shut their doors while flights were grounded.

What this means: For those watching these figures as an indicator for Friday's government jobs report, disappointment could be on the horizon. Economists expect 1.4 million jobs to be added to the economy in August, bringing the unemployment rate to 9.8%. It would be the first time since April that the jobless rate is below the peak of the Great Recession.

July's job data showed the US labor market’s third straight month of solid improvement from the depths of the pandemic. However millions of Americans who lost their jobs at the beginning of the pandemic remain unemployed.

Economists are worried that the tepid recovery in the US job market could run out of steam this fall should coronavirus cases surge again just as federal stimulus money runs out. The world's top developed economies are all officially in a recession. What happens next is far from certain.

Since the start of the Covid-19 pandemic through Aug. 27, there have been more than 476,000 cases in children, according to an updated report published by the American Academy of Pediatrics and the Children’s Hospital Association.

The report looks at publicly reported data from 49 states, New York City, the District of Columbia, Puerto Rico and Guam.

For the 43 states and New York City that reported on mortality, children made up 0% to 0.3% of all Covid-19 deaths and 19 states reported zero child deaths. In the states that reported, 0% to 0.7% of all child cases resulted in death.

“At this time, it appears that severe illness due to Covid-19 is rare among children,” the report says. “However, states should continue to provide detailed reports on Covid-19 cases, testing, hospitalizations, and mortality by age so that the effects of Covid-19 on children’s health can be documented and monitored.”

On NBC’s Today Show on Wednesday, Dr. Anthony Fauci, director of the National Institute of Allergy and Infectious Diseases, was asked whether it was possible to get control of Covid-19 ahead of flu season, and whether he was concerned about a so-called “twindemic.”

“You know, I am,” Fauci said. “And what I would really like to see is kind of a full-court press to get us way down as a baseline, so that when you get these cases in the fall, they won’t surge up – they’ll be controllable.”

Dr. Francis Collins, director of the National Institutes of Health, said he was “surprised” by the media uproar on treatment guidelines for convalescent plasma for Covid-19, in a tweet Tuesday evening.

“Surprised by media uproar on Treatment Guidelines on convalescent plasma for #COVID19,” the tweet said.

Collins went on to say that the guidelines mirror an emergency use authorization; that the EUA says “CP should not be considered new standard of care,” and provided a link to the EUA.

Some background: An NIH panel said yesterday there's no evidence backing the use of convalescent plasma to treat coronavirus patients and that doctors should not treat it as a standard of care until more study has been done.

"There are insufficient data to recommend either for or against the use of convalescent plasma for the treatment of COVID-19," the panel of more than three dozen experts said in a statement posted on the NIH website Tuesday.

The statement, which was posted quietly, contradicts the Trump Administration's characterization of the treatment as "historic" and a "major advance" and directly refers to last week's emergency use authorization by the US Food and Drug Administration.

College students infected with the novel coronavirus should stay on campus and isolate there as opposed to returning home, according to Dr. Anthony Fauci, director of the National Institute of Allergy and Infectious Diseases.

A return to campus for the new academic year has colleges and universities struggling to both contain outbreaks of Covid-19 and enforce policies meant to prevent its spread.

“Keep them at the university in a place that’s sequestered enough from the other students, but don’t have them go home, because they could be spreading it in their home state,” Fauci said during a prerecorded interview on NBC’s Today Show on Wednesday.

Asked if campuses should be shut down when there are infected students to send kids home, Fauci replied: “It’s the worst thing you could do.”

Holiday weekends have led to surges in Covid-19 cases but practicing mitigation measures can help prevent these surges, according to Dr. Anthony Fauci, director of the National Institute of Allergy and Infectious Diseases.

“When you have a holiday like Labor Day – we have seen after the 4th of July, we saw after Memorial Day – a surge in cases,” Fauci said during a prerecorded interview on NBC’s Today Show on Wednesday.

“Wear a mask, keep social distancing, avoid crowds. You can avoid those kinds of surges,” he said.