Another 1.4 million jobs were added to the US economy in August, as the jobs recovery continued to slow.

This was in line with expectations, and down from 1.7 million jobs added in July and 4.8 million in June.

Every person who can go back to work is a win for the recovery from the unprecedented jobless crisis the Covid-19 pandemic has brought on. However, America is still down 11.5 million jobs from February.

The unemployment rate fell to 8.4%. It's below 10% — which was also its Great Recession peak — for the first time since March.

This means millions of families in need of benefits to make ends meet while Congress continues to argue about the next stimulus package.

During the Republican National Convention last week, President Trump promised to create 10 million new jobs in 10 months. If the predictions hold true, he'll have 8.6 million more to go — and even then, the US economy wouldn't have gained back all the jobs lost since February.

Trump's promise could prove difficult to achieve. The recovery is losing steam as the sugar rush from stimulus wears off, millions of people are still working from home, and retail, restaurants and other services industries remain battered from the pandemic.

Indiana University Bloomington is now recommending that all students living in sorority and fraternity houses reevaluate their living situations due to the quickly increasing spread of coronavirus in those environments.

“Mitigation testing positivity rates in some houses are now above 50 percent. As such, IU's team of public health experts is extremely concerned that Greek houses are seeing uncontrolled spread of COVID-19,” the university said in a statement Thursday. “This poses a significant risk to the nearly 2,600 students currently living in Greek or other communal housing organizations, as well as to the other 42,000 IU Bloomington students, the campus's 12,000 faculty and staff, and the surrounding community.”

Greek houses are owned and operated by their respective Greek organizations, not by the university as self, so IU doesn’t have the jurisdiction to regulate the houses.

CNN previously reported that 30 fraternity and sorority houses at the school had been placed under quarantine by the county health department.

A Covid-19 vaccine developed and tested in Russia generated neutralizing antibodies in dozens of study subjects, and while the vaccine often caused side effects such as fever, those side effects were mostly mild, according to data published Friday in the medical journal The Lancet.

In the phase one and two studies, all 76 study participants developed antibodies to the virus that causes Covid-19, according to the report.

The levels of neutralizing antibody response were similar to the immune response that people had after naturally recovering from Covid-19, according to the study.

The researchers also looked at responses from T cells, another component of the immune system.

“[Outcomes from] the trial also suggest the vaccines also produce a T cell response within 28 days,” the researchers wrote.

Remember: Scientists not involved in the study said while the results are a positive sign, only larger, phase three trials can confirm whether the vaccine actually prevents illness with Covid-19.

“The data on the Russian vaccine studies reported in the Lancet are encouraging,” said Brendan Wren, professor of microbial pathogenesis, London School of Hygiene and Tropical Medicine.

In the study, half of the participants developed fevers and 42% developed headaches. In addition, about 28% experienced weakness and 24% had joint pain.

The article did not say how long these side effects lasted but said “most adverse events were mild.”

The vaccine was registered in Russia in August, before it had gone through large-scale trials. The researchers at the Gamaleya National Research Centre for Epidemiology and Microbiology in Russia received approval on August 26 to do a phase three trial, which is expected to have 40,000 volunteers, according to a press release from The Lancet. The researchers are already distributing the vaccine to high-risk groups, according to Kirill Dmietriev, head of the Russian Direct Investment Fund (RDIF), which is financing Russian vaccine research.

Gamaleya is using adenoviruses in their Covid-19 vaccines; this is the same type of approach used in the vaccine developed by University of Oxford and AstraZeneca. The adenovirus delivers genetic material for the spike protein that sits atop the virus the causes Covid-19, and that genetic material is designed to generate an immune response to the virus that causes Covid-19.

Adenoviruses can cause a variety of symptoms, including the common cold. The researchers manipulate the virus so it will not replicate and cause illness.

The Gamaleya vaccine is given in two doses, and each dose used a different adenovirus vector.

The first peer-reviewed results of Phase 1 and Phase 2 clinical trials of Russia’s coronavirus vaccine, which is named Sputnik-V, have been published in the medical journal The Lancet on Friday.

Results from the two 42-day trials – which each included 38 healthy adults – “have a good safety profile with no serious adverse events” among participants, The Lancet said in a press release, noting that the vaccine-induced antibody responses in all participants.

Russia faced criticism last month when it announced the world's first approved coronavirus vaccine for public use, even before Phase 3 trials are completed.

Russia also faced skepticism over how quickly the vaccine was registered and the initial lack of scientific data around the clinical trials.

Naor Bar-Zeev, deputy director of the International Vaccine Access Center at Johns Hopkins University said in a linked comment that the studies are “encouraging but small,” according to The Lancet. Bar-Zeev was not involved in the Russian study, but peer reviewed it.

Kirill Dmitriev, CEO of the Russian Direct Investment Fund (RDIF) funding the vaccine development said the trial results confirm the "high safety and efficacy" of the vaccine, adding in a statement Friday that the results are "a powerful response to sceptics who unreasonably criticized the Russian vaccine."

America's jobs recovery is expected to have slowed further in August as the services sector continues to struggle.

Economists polled by Refintiv predict the US economy added 1.4 million jobs in August, down from 1.8 million jobs added in July and 4.8 million in June.

The unemployment rate is expected to fall to 9.8% in August, which would be the first time since March that it stands below 10%. That would also be below the peak unemployment rate reached during the Great Recession.

Every person who can go back to work is a win for the recovery from the unprecedented jobless crisis the Covid-19 pandemic has brought on. However, America would still be down nearly 11.5 million jobs from February, even with more than 1 million job gains last month. 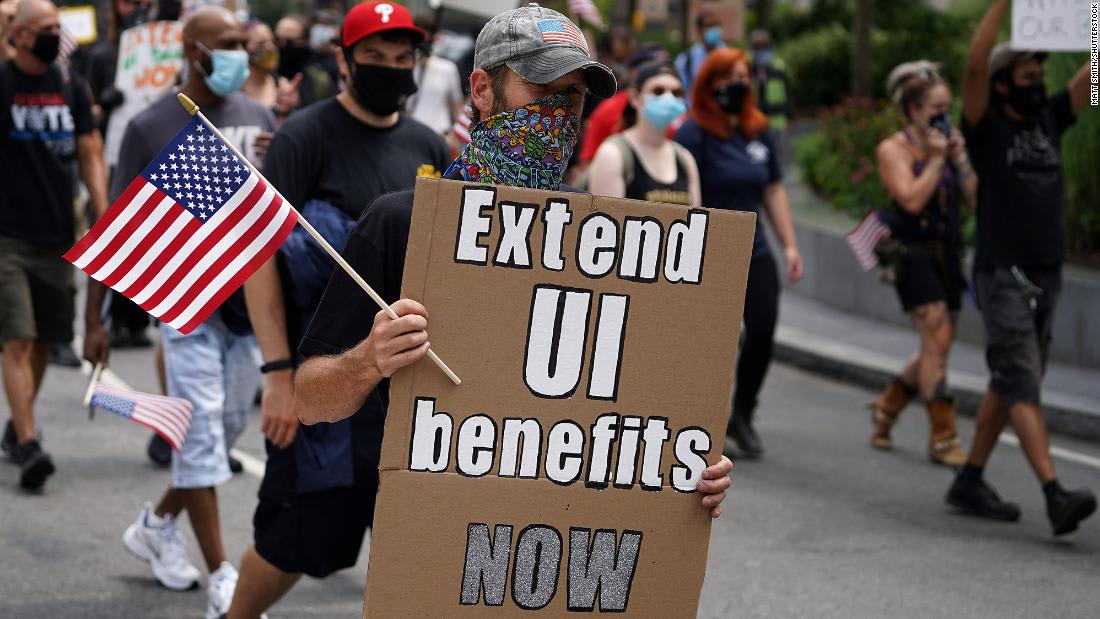 America's jobs recovery is expected to have cooled off in August

The Czech Republic has set a new daily record for the second day in a row for new coronavirus infections.

The central European country recorded 680 new Covid-19 cases on Thursday, surpassing Wednesday’s record of 650, according to the Ministry of Health.

The Czech Republic has a total of 26,452 confirmed cases of coronavirus and 426 people have died of the virus.

A model often cited by top health officials dramatically raised its projections for US Covid-19 deaths Friday morning, predicting over 410,000 deaths by January 1 -- which would mean another 224,000 Americans lost in just the next four months.

The model from the University of Washington’s Institute for Health Metrics and Evaluation points to declining mask use in some regions from a peak in usage in early August. The scenarios in the model suggest 122,000 of those lives could be saved with near-universal mask use. Conversely, the model warns the death toll could be much higher -- over 620,000 -- if all restrictions are eased.

“If a herd immunity strategy is pursued, meaning no further government intervention is taken from now to Jan 1st, the death toll could increase to 620,000," according to IHME’s briefing.

IHME expects the death rate to reach an unprecedented 3,000 a day by December, due in part to “declining vigilance of the public.”

The IHME model, which is more aggressive in its predictions than others, comes a day after a new CDC ensemble forecast predicted 211,000 US deaths from Covid-19 by September 26.

There is no cause for “concern” over the health of Former Italian Prime Minister Silvio Berlusconi, his representatives told CNN.

The 83-year-old former PM and media magnate was admitted to hospital Thursday with mild coronavirus symptoms and subsequently tested positive.

Berlusconi was prime minister four times for a total of nine years, and has been the subject of multiple corruption, fraud and bribery trials.

“Berlusconi, after the appearance of some symptoms, was admitted to the San Raffale hospital in Milan as a precaution. The clinical picture does not cause concern,” Berlusconi’s spokesperson told CNN.

South Korea is extending its strict social distancing measures for the greater Seoul Metropolitan area for one more week until September 13, the country's Health Minister Park Neung-hoo said in a briefing today.

"The government feels it's necessary to extend these measures until the new daily numbers visibly drop so that our epidemiological investigation and medical system capacity can handle the situation," Park explained.

The current restrictions were due to expire this Sunday.

All kindergartens and schools except some high school classes in the greater Seoul Metropolitan area will continue to hold online classes for two more weeks until September 20, the Education Ministry's Vice Minister Park Baek-beom said in a separate briefing.

All restaurants and bakeries will continue to stop eat-in services between 9 p.m. to 5 a.m. local time, and gyms and indoor sporting facilities will be closed for one more week due to this decision.

The rest of South Korea, where level-two social distancing measures are implemented, will maintain the restrictions for two more weeks from September 9 until September 20, Park said. However, local authorities can adjust the duration of restrictions.

What level-two social distancing means: Indoor gatherings are limited to 50 people and outdoor gatherings to 100. Churches nationwide will be strongly advised to hold online services by local authorities, Park added.

South Korea reported 198 new coronavirus cases from Thursday, of which 189 are local cases, and nine are imported, according to the press release by the South Korean Centers for Disease Control and Prevention (KCDC) on Friday. South Korea currently has 20,842 confirmed cases of Covid-19 and 331 deaths from the virus.