The United States reported 50,502 new Covid-19 cases and 965 virus-related deaths on Friday, according to data from Johns Hopkins University.

Follow CNN's live tracker of US cases and deaths here:

It was a woman with blonde dreadlocks who capped off one of the biggest anti-coronavirus demonstrations in Europe on Saturday, which saw tens of thousands of anti-vaxxers, conspiracy theorists and the far-right march through the German capital, Berlin.

Speaking on a stage by Germany's parliament, the Reichstag, she egged the crowd on to occupy the building. "Trump is in Berlin," the woman falsely said, according to a video posted of her speech on social media. "Go up there and sit peaceably on [the] stairs and show President Trump ... that we want world peace and that we are sick of it."

CNN has attempted to reach the woman, identified as Tamara K. in German media, for comment.

The gathering turned into a mob, which pushed past barricades and made its way towards the Reichstag's steps in scenes that horrified politicians, bringing back memories of darker times in the country's history. Protesters held up imperial banners, a flag now deployed by the far right as the swastika is banned in Germany.

Among them were QAnon supporters toting the US conspiracy group's insignia, as well as a symbol rarely associated with German anti-government protests: the US Stars and Stripes.

Germany has been lauded for its pandemic response, thanks to wide-scale testing and a fast response to the outbreak which has helped keep its Covid-19 mortality rate low -- despite a high number of reported cases. Yet the events at the Reichstag have worried experts that the country has become a victim of its own success, allowing for the spread of coronavirus scepticism. 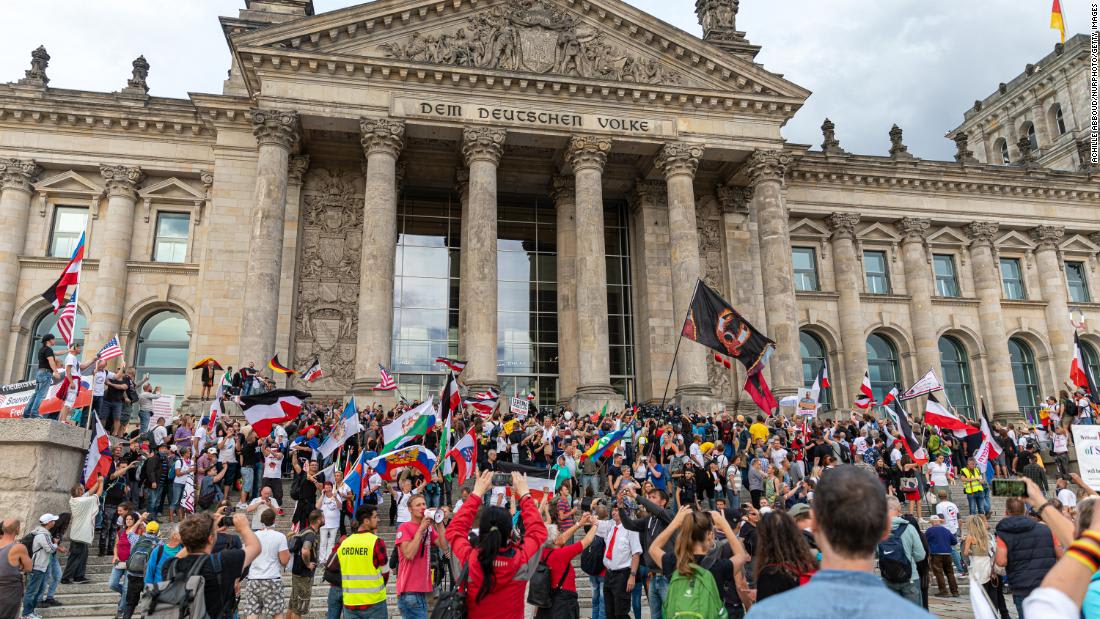 Germany's virus response won plaudits. But protests over vaccines and masks show it's a victim of its own success

Friday's figure pushed India's total number of cases past 4 million. The total now stands at 4,023,179 infections -- of which more than 3.1 million have recovered and 846,395 are still active.

This is the third consecutive day India has recorded more than 80,000 new cases. Globally, it is the third worst-affected country after the United States and Brazil, which have 6.2 million and 4.09 million cases respectively, according to Johns Hopkins University.

Nine fraternities and sororities at the University of Wisconsin-Madison have been placed under quarantine for at least 14 days due to confirmed cases of Covid-19.

"The nine chapters have about 420 members. As of Sept. 2, 38 of them had tested positive. There are approximately 1,500 students living in recognized fraternity and sorority chapter houses out of a total community of 5,000 members," the university said in a press release on Friday.

Jake Baggott, executive director of University Health Services, said campus authorities wanted to stop any further spread of the virus among the students and the broader community.

Those who violate the isolation or quarantine orders could face a court order and/or fine of up to $10,000, as well as university sanctions against the student, the release added.

All residents in the other 38 Greek life chapters with live-in houses are also required to be tested for the virus.

Moderna and Pfizer, the two major pharmaceutical companies developing coronavirus vaccines, are still not enrolling enough minorities in their clinical trials, according to their trial updates.

The recommendation: Dr. Anthony Fauci, the director of the National Institute of Allergy and Infectious Diseases, told CNN that Phase 3 clinical trials should aim to include minorities at levels that are at least double their representation in the population to better reflect the population most affected by Covid-19.

That would mean 37% of the study participants would be Latino, and 27% would be Black.

The reality: As of this week, 16% of Moderna’s study subjects were Latino, and 10% were Black.

That doesn’t square with Fauci’s recommendation to aim to enroll those minorities at levels at least double their numbers in the Census.

Why this matters: Minority enrollment in the trials is important for two reasons:

New Zealand has reported a second Covid-19 death linked to a cluster in Auckland.

"The Ministry can confirm that the former Prime Minister of the Cook Islands Dr Joseph Williams QSO passed away last night in Auckland City Hospital," the country's Ministry of Health said in a press release on Saturday.

"Dr Williams, who was in his 80s, was also a widely regarded member of health services in both New Zealand and the Cook Islands."

The release said Williams had been admitted to hospital on August 13, and passed away Friday evening.

Two deaths in two days: Only yesterday, the country reported its first Covid-19 death in more than three months -- a man in his 50s, who was linked to the Auckland cluster.

"Today’s sad news again reinforces the importance of our shared vigilance against COVID-19, the very serious consequences the virus can carry with it, and the measures we all need to take to stop the spread, break any chain of transmission and prevent deaths," the ministry said in Saturday's release.

US states should be ready to distribute a coronavirus vaccine by November 1 “just in case” one is ready, Surgeon General Dr. Jerome Adams said in an ABC News interview Friday.

“We've always said that we are hopeful for a vaccine by the end of this year or beginning of next year,” Adams said. “That said, it's not just about having a vaccine that is safe and effective -- it's about being ready to distribute it.”

The US Centers for Disease Control and Prevention has asked state public health officials to prepare to distribute a coronavirus vaccine by late October or early November.

Adams said the guidance is “just in case” a vaccine is approved by that time -- reiterating comments by public health officials that such an event is possible but not probable.

He added that data from Phase 1 and Phase 2 trials has been positive, and independent safety boards ensure the vaccine only moves forward if "there is good evidence" of its efficacy.

Brazil has the second-highest number of coronavirus infections and deaths in the world, behind only the United States, according to data from Johns Hopkins University.

A model often cited by top health officials now predicts more than 410,000 people will die of coronavirus in the US by January 1 – which would mean another 224,000 Americans lost in just the next four months.

Fauci said people should keep in mind that models depend on the assumptions that go into them, but such a high number of deaths is possible.

“We don’t want to get to that number by any stretch of the imagination,” the director of the National Institute of Allergy and Infectious Diseases said. “So what are we going to do to prevent us from getting that number?”

Fauci stressed that “one of the things we can do is a more uniform utilization of masks.”