As schools begin their fall semester, universities and colleges are struggling to contain coronavirus outbreaks with cases reported at campuses in all 50 states.

There have been more than 40,000 cases of Covid-19 among students, faculty and staff at colleges and universities across the country. The number represents cases that CNN has reported so far -- and is likely higher due to a lag from schools that update their data every few days.

With social life trickling back to life on campuses, coronavirus outbreaks have hit places students congregate such as fraternities and sororities, where some have continued to gather despite remote learning.

A cluster of Covid-19 cases was linked to a fraternity party at the University of New Hampshire last weekend. More than 100 people attended the August 29 party and few wore masks. Eleven people connected to the party have tested positive for the virus, university officials said. 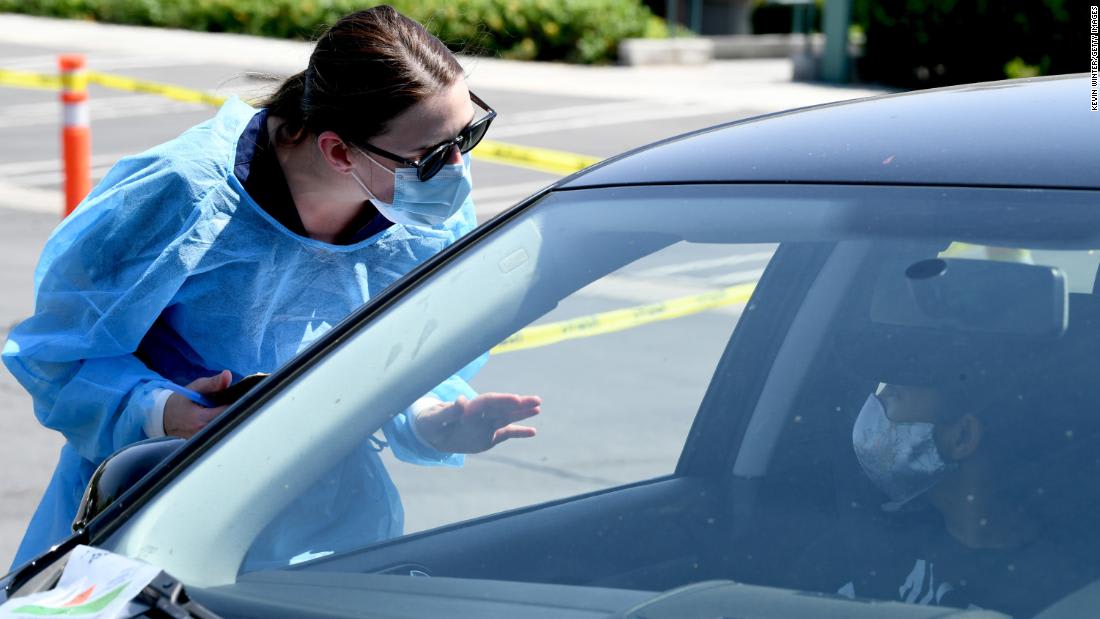 The United States plans to stop limiting international arrivals from certain countries to 15 airports and funneling them through enhanced screening. Instead, passengers will be advised about risks.

As of Thursday, there were more than 6.3 million coronavirus cases reported and over 190,000 people dead nationwide, according to Johns Hopkins University.

"Beginning September 14, 2020, the US government will remove requirements for directing all flights carrying airline passengers arriving from, or recently had a presence in, certain countries to land at one of 15 designated airports and halt enhanced entry health screening for these passengers," the Centers for Disease Control and Prevention said in an updated post on its website.
"Currently, enhanced entry health screening is conducted for those arriving from, or with recent presence in, China (excluding the Special Administrative Regions of Hong Kong and Macau), Iran, the Schengen region of Europe, the United Kingdom (excluding overseas territories outside of Europe), Ireland, and Brazil."

Screening for symptoms doesn't really help much because so many people do not have symptoms, the CDC said. 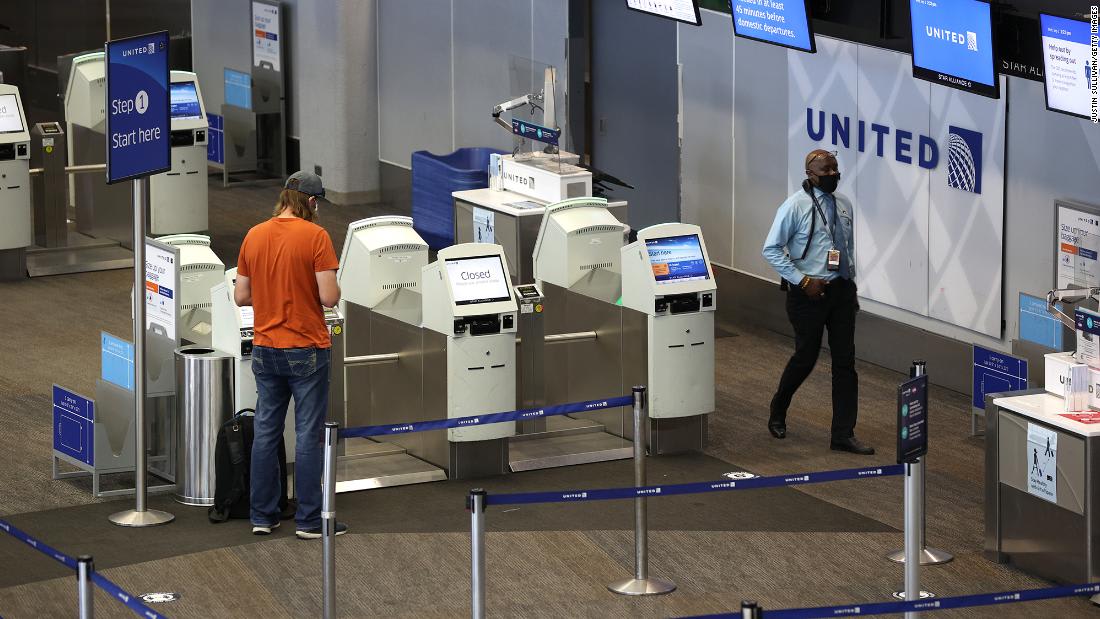 AstraZeneca denied news reports Wednesday that suggested its coronavirus vaccine trial was stopped because of a case of transverse myelitis – a rare inflammatory condition of the spinal cord.

“Reports claiming to be based on comments made earlier today by our CEO stating that we have confirmed that a participant in our clinical trial suffered from transverse myelitis are incorrect. He stated that there is no final diagnosis and that there will not be one until more tests are carried out,” a spokesperson for the pharmaceutical giant said in a statement emailed to CNN.
“Those tests will be delivered to an independent safety committee that will review the event and establish a final diagnosis,” the spokesperson added.

AstraZeneca said Tuesday it had paused vaccine trials globally because of an undisclosed event, but did not elaborate on what it was. The New York Times had quoted a source saying a trial volunteer had transverse myelitis.

On Wednesday, STAT News reported that the company’s CEO, Pascal Soriot, told investors in a conference call that the trial was stopped because a woman volunteering in the trial had symptoms consistent with transverse myelitis.

There was a similar incident earlier, the AstraZeneca spokesperson said.

“We can also confirm that there was a brief trial pause in July while a safety review took place after one volunteer was confirmed to have an undiagnosed case of multiple sclerosis, which the independent panel concluded was unrelated to the vaccine,” the spokesperson said.

As global pharmaceutical companies race to complete their Covid-19 vaccine trials, the logistics that will be required to deliver them to all corners of the world are coming into focus -- and it will be a mission like no other.

According to the International Air Transport Association (IATA), providing a single dose of the vaccine to 7.8 billion people will require the use of 8,000 Boeing 747 cargo aircraft -- and planning needs to begin now.

Safely delivering Covid-19 vaccines will be the mission of the century for the global air cargo industry," said IATA's director general and CEO, Alexandre de Juniac, in a statement.

"We urge governments to take the lead in facilitating cooperation across the logistics chain so that the facilities, security arrangements and border processes are ready for the mammoth and complex task ahead," he added.

The air cargo industry has long played an important role in vaccine distribution, providing well-established time- and temperature-sensitive systems -- which will be crucial to the quick and efficient transport of Covid-19 vaccines, notes IATA. 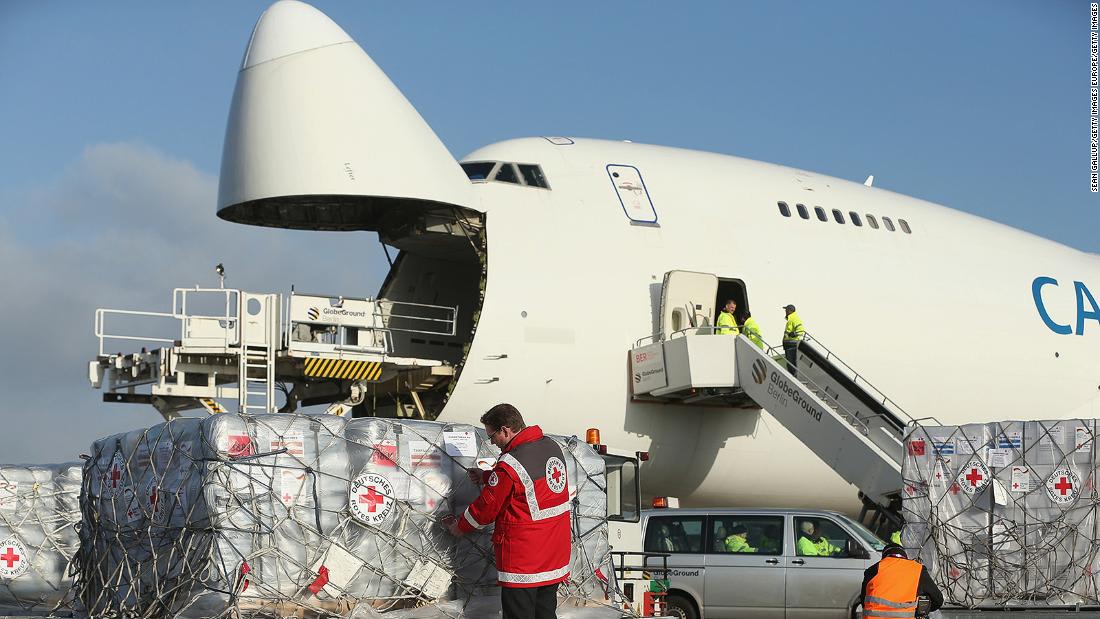 'Mission of the century': 8,000 cargo jets needed to transport Covid-19 vaccines around the world, says IATA

France should avoid going back into lockdown as it fights the resurgence of Covid-19 in the country, but the government cannot rule out imposing such restrictions at a local level, scientific adviser Jean-François Delfraissy said during an interview with RTL today.

Delfraissy, who heads the scientific council that advises the French government, said both the council and himself were “convinced that France should not go back to a lockdown.”

However, he also said that local lockdowns could “not completely be ruled out,” and stronger restrictions could be imposed in regions showing higher infection rates.

Rising cases: The virus has “started to significantly circulate again” in the past few weeks, leading to “worrying” situations in some regions, Delfraissy explained.

He added that the “difficult” choices to be made by the government would not only be determined by sanitary reasons, but also by economic and social factors.

Decisions had to be made quickly to curb the epidemic, he said, as any decision would take “about three weeks” to have visible impacts.

Los Angeles County, for example, has led the charge by issuing formal guidance that recommends against trick-or-treating and bans outright haunted houses, festivals and other traditional festivities that would fall under current Covid-19 health guidelines, according to the county's public health department.

The decision is history repeating itself: During the 1918 influenza pandemic, "Halloween parties in general, as well as other social functions attracting large numbers of people (were) discouraged" by LA health authorities, according to an October 30, 1918, Los Angeles Times report.

The fall of 1918 was the second and worst wave of the 1918 flu pandemic, which killed between 50 million and 100 million people worldwide.

"Not only was the peak of death right before Halloween, but they were still experiencing pretty severe waves," said Carolyn Orbann, an associate teaching professor in the department of health sciences at the University of Missouri-Columbia.

The highest death rates occurred from October to December, possibly due to a deadlier strain of the virus and crowding in hospitals and military camps.

"In most places in the United States, by October 31 of 1918, conditions would have been grim," said Elizabeth Outka, a professor of English at the University of Richmond and author of the book "Viral Modernism: The Influenza Pandemic and Interwar Literature."

As the flu ravaged the globe, many US cities saw the need to restrict or ban Halloween celebrations.

New Jersey Gov. Phil Murphy said Wednesday he would have taken more aggressive action to fight Covid-19 if US President Donald Trump had been more honest about the true threat of coronavirus during the early days of the pandemic.

Murphy's comments come after CNN obtained audio tapes of Trump telling legendary journalist Bob Woodward that he knew weeks before the first confirmed US coronavirus death that the virus was dangerous, airborne, highly contagious and "more deadly than even your strenuous flus," and that he repeatedly played it down publicly.

Murphy said Wednesday had he known -- as Trump did -- that the virus was airborne, he would've taken steps earlier to protect his state. 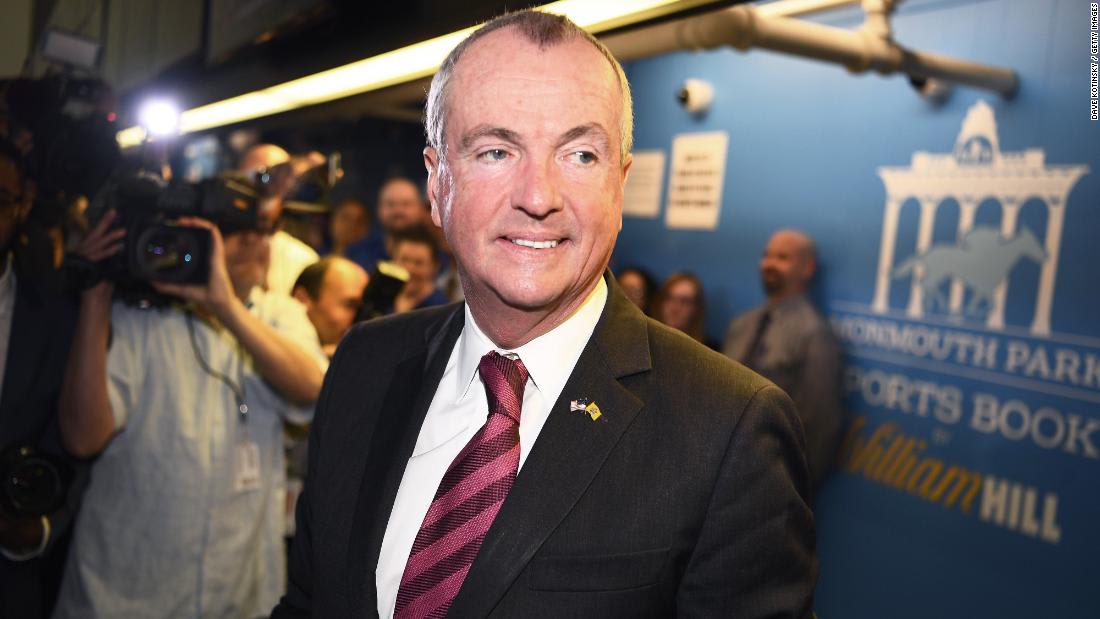 Editor's note: Michael Bociurkiw is a global affairs analyst and a former spokesman for the Organization for Security and Cooperation in Europe. The opinions expressed in this commentary are his.

There are a number of theories as to why Canada has managed to flatten the Covid-19 curve much better than the United States. One is that Canadians, who entered confederation with the motto "peace, order and good government" are much more compliant than our southern neighbors with their attachment to "life, liberty and the pursuit of happiness" -- even if it means potentially killing others by refusing to wear masks in the name of freedom.

"A lot of Canadians are rule-followers. If you're at the bank and there's three tellers open everybody gets in line behind one teller and waits for their turn to be called. We are very, for the most part, rule followers -- especially in Ottawa," Sarah Chown, the managing partner of Metropolitan Brasserie in Ottawa and local chair of the Ontario Restaurant, Hotel and Motel Association, told me.

It can also be argued that the federal and provincial governments enabled Canadians to respect lockdowns and stay at home by offering unprecedented and generous financial aid from early on -- including up to C$2000 per month for Canadians out of work, as well as more time to pay taxes and mortgage payment deferrals, allowances for seniors, and wage subsidies for businesses -- all a far cry from the limited amounts offered south of the border. Even the media received a C$30 million handout from Ottawa in the form of forgiveness of broadcasting fees.

In all, the Covid-19 measures helped push the federal deficit to C$343.2 billion this year and the federal debt past the C$1 trillion mark for the first time, former federal Finance Minister Bill Morneau said in July.

And all that is on top of free public health care, including free testing.

"If compliance means personal or business bankruptcy, people will ignore orders such as lockdowns. I suspect that's part of the American Covid-19 story in certain regions," Canadian political analyst Yaroslav Baran told me. 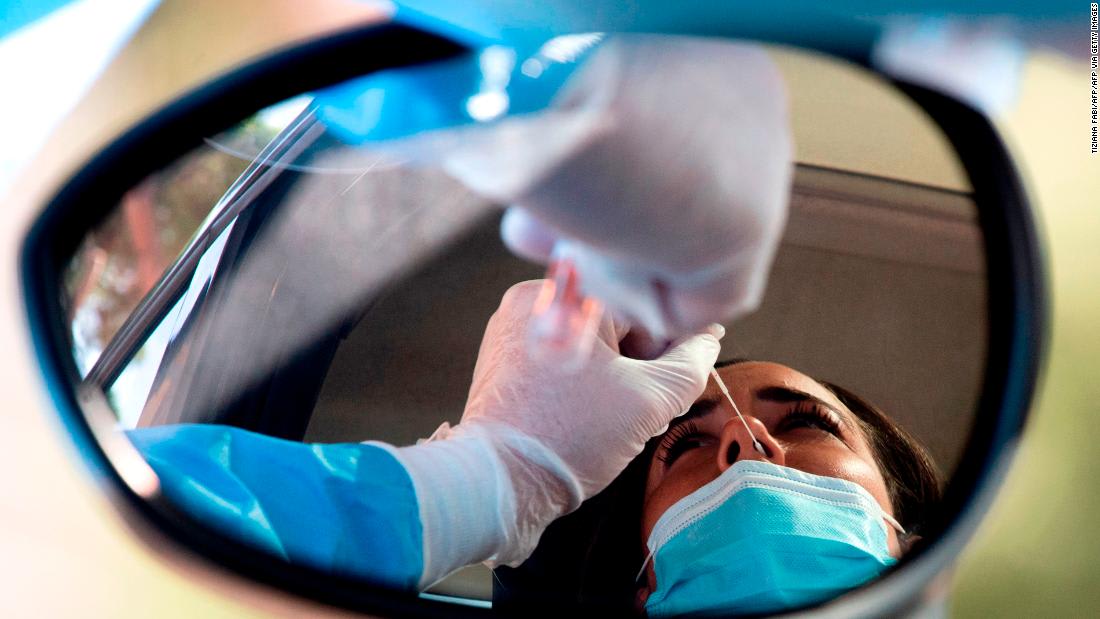 Opinion: Why Canada flattened the curve -- and the US didn't

Jakarta is putting the "emergency brakes" on relaxing coronavirus restrictions and instead reimposing strict measures, the Indonesian capital's governor said, according to state news agency Antara.

The governor said his decision was based on three factors, Anatara reported:

"In the past two weeks, mortality rates have spiked back up. In terms of percentage, they may still be considerably low, but in terms of the numbers, they have gone back up. The availability of beds is at maximum capacity and they may be fully filled by the end of the month, if there are no restrictions," Baswedan said.

The new measures will go into effect September 14, according to Antara.

Jakarta's government reported that 12.2% of those tested for Covid-19 in the city last week tested positive. The city, home to more than 10 million people, has confirmed a total of 49,837 Covid-19 infections. That's nearly a quarter of Indonesia's total number of cases, according to government figures.

Jakarta's death toll from the virus is 1,347. Indonesia's nationwide death toll is 8,336, according to Johns Hopkins University.