Ohio State University plans to cancel spring break next year to reduce the exposure of its students, faculty and staff to coronavirus.

Instead of the traditional spring break, there will be two days without classes on Feb. 9 and March 31, according to an email from executive vice president and provost Bruce A. McPheron to students and faculty.

The university said this will "keep our community together throughout the semester and reduce travel-related exposures."

The first week of classes of the second semester, beginning Jan. 11, will also entirely be online to give students time to quarantine before any in-person classes. Ohio State classes currently operate through a mix of in-person and online sessions, the university said.

"While there were many adjustments to our plans over the summer, we hope that our experience this semester will allow for a smoother and more predictable plan heading into spring semester," McPheron said.

What the numbers look like: Between Aug. 14 and Sept. 10, there were 2,097 students and 28 employees who tested positive for coronavirus, according to the university.

With talk of a Covid-19 vaccine candidate heating up, you might have heard the term emergency use authorization — or EUA — all over the news lately. But what is it exactly, and how does it apply to vaccines?

There is a lot of ongoing concern and debate about whether any vaccine candidate should be granted an EUA — or outright approval — without first completing phase 3 clinical trials.

During the Covid-19 pandemic, the FDA has granted EUAs many times to a wide range of medical products, such as ventilators; personal protective equipment, including masks; molecular and antigen tests to diagnose Covid-19, and serologic tests to look for antibodies; and even treatments, such as remdesivir and convalescent plasma. 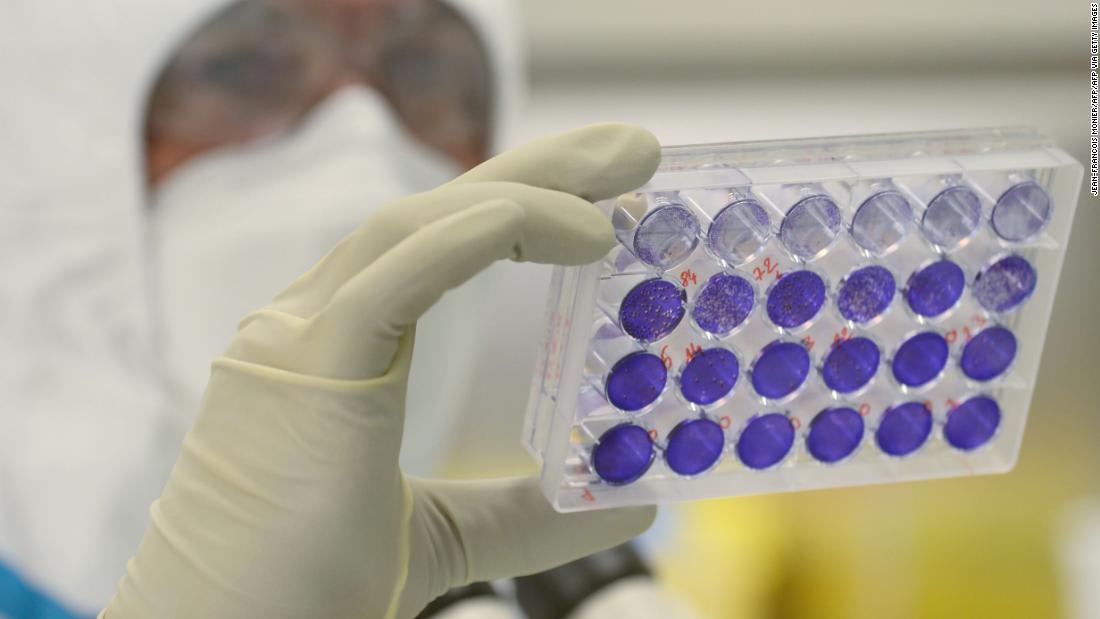 This process will determine how quickly we get a coronavirus vaccine

Iran registered 2,089 new Covid-19 cases on Sunday, bringing the total number of infections across the country to 402,029, according to data from the Health Ministry registered.

Iran was one of the first countries to be badly hit by the virus. At one point it was among the countries with the highest case counts globally.

It's the first NFL Sunday of the season, which typically signals the start of tailgating, fantasy football trash talk and Scott Hanson of "NFL Red Zone" gracing your television screen.

However, things will be very different this year.

There will be no fans in most stadiums to start the year, and you may not see some of your favorite players suit up due to the pandemic.

There were some doubts that the NFL would be able to kick off its season as scheduled due to the pandemic, but the league was able to get through training camp and start the season as planned on Thursday night.

While the league plans to play out the season as scheduled, things could quickly change with thousands of new coronavirus cases still being reported across the US.

For a full-contact sport like football -- in which it's virtually impossible to avoid being close to others, even under the strictest guidelines -- it is all but certain more players will test positive for the coronavirus, experts say.

Read more about what to expect from this extraordinary season here.

It's been five months since Lucy Gahan contracted Covid-19, and her life still hasn't returned to normal.

Gahan, a clinical psychologist in Shrewsbury, United Kingdom, hasn't been able to return to work.

The disease causes what she calls "storms," disabling periods when she feels shortness of breath, numbness in her hands and feet and her heart rate shoots up from simple tasks. Even taking a shower is possible only during an occasional respite in symptoms.

"In May and June, I could barely talk because I was so ill," she said.

Before contracting the disease in early April, the mother of two ran three times a week and had a regular yoga routine.

"I can only walk as far as the corner," she said. "In terms of running, I can't imagine when that will happen, if ever."

She is one of thousands around the world for whom Covid-19 has turned into a chronic condition. Gahan and other Covid-19 "long haulers" feel they aren't yet getting recognition for an illness that has disabled them for months, with no end in sight. 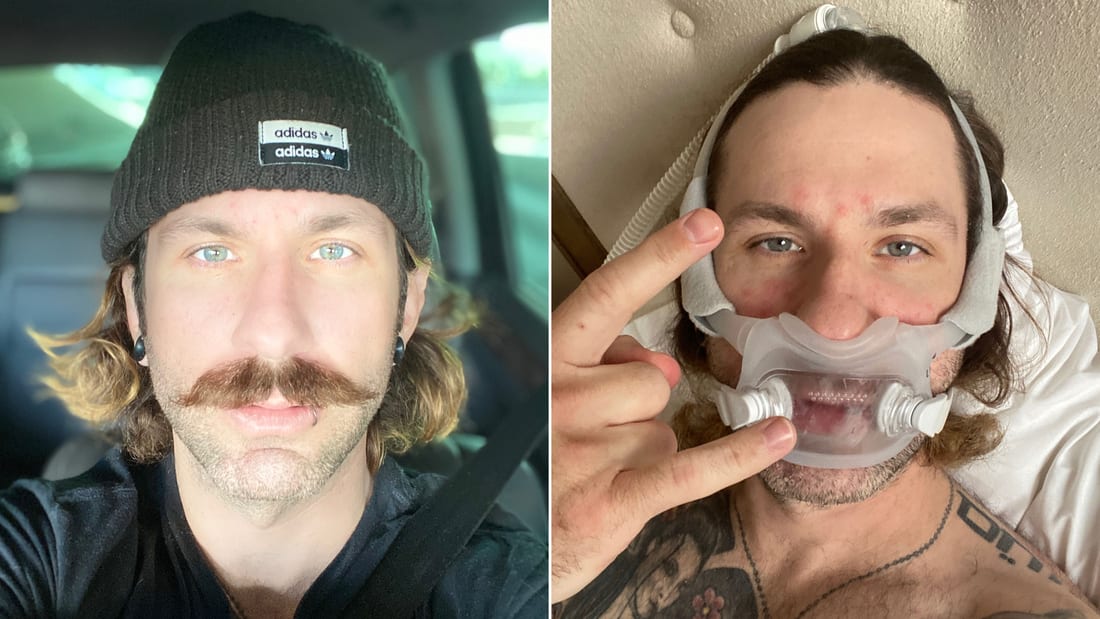 The strict measures have been in place since August 30 and were due to expire this Sunday.

The government has decided to adjust the measures to level two for two weeks until September 27. The new regime will see franchise cafes and ice cream shops able to provide sit-in services again. Restaurants and bakeries will no longer need to close between 9 p.m. and 5 a.m as long as they maintain precautionary measures such as keeping the log books and ensuring enough distance between tables, Health Minister Park Neung-hoo said in a briefing on Sunday.

Food and snack services and the entry of minors will continue to be banned at Internet cafes.

Under the level-two restrictions, indoor gatherings are limited to 50 people and outdoor gatherings to 100 people, Park said. High-risk facilities such as bars, clubs, singing rooms and door-to-door sales services will be unable to operate, according to the Health Minister.

South Korea reported 121 new coronavirus cases from Saturday, of which 99 are local cases, according to a statement by the South Korean Centers for Disease Control and Prevention on Sunday.

South Korea currently has 22,176 confirmed cases of Covid-19 and 358 deaths from the virus.

At least 74 people were arrested on Sunday in Melbourne, Australia during the second day of anti-lockdown protests, according to Victoria Police.

Lockdown in the state is set to start easing on Sunday night.

“Police were disappointed that many protesters were aggressive and threatened violence towards officers,” the statement said.

Police said a 44-year-old man believed to be a “primary agitator” for the protests remains in police custody and is expected to be charged with incitement. His home will also be subject to a search warrant, police said.

Video of the demonstrations showed police in riot gear arresting protesters in the streets while onlookers chanted “freedom.”

As of Sunday, Victoria has 19,835 confirmed cases of coronavirus and 723 deaths.

“From 11.59 p.m. Melbourne moves from Stage Four to the First Step of the roadmap for reopening, with modest changes including more social interaction and more time outside,” Andrews said in a statement.

In Melbourne, playgrounds and outdoor fitness equipment will reopen, outdoor exercise time will be extended to two hours split over a maximum of two sessions, and those living alone or single parents will be allowed to have one other person in their home, according to Andrews.

Outside of Melbourne, regional Victoria will move from stage three restrictions to the second step of the roadmap, which allows up to five people from a maximum of two households to gather in outdoor public places. “Outdoor pools and playgrounds in regional Victoria will also open. And religious services can be conducted outside with a maximum of five people, plus a faith leader,” the statement said.

Victoria’s state of emergency and state of disaster, however, will be extended for four more weeks.

"The State of Emergency ensures we have all the tools we need to fight this virus – keeping all of us safe,” Andrews said.

Victoria recorded 41 new Covid-19 cases and 7 deaths on Saturday, down from its peak of 686 new daily cases in early August.

Six students at Miami University in Ohio were cited for violating a city ordinance on mass gatherings after they held a house party despite at least one of them testing positive for Covid-19, according to police records.

Body camera video from the Oxford Police Department shows an officer approaching a group of men gathered on the porch of a home near the university's campus on September 5, asking them who lives there.

One student replies that eight people lived in the house and that at the time about 20 people were inside. Both indoor and outdoor mass gatherings in Oxford involving people who don't live together are limited to 10 people, per the city's ordinance.

The officer tells the student to disperse the crowd gathered at the house, and eventually asks to see his ID. After scanning it, he calls the student over.

"I've never seen this before, there's an input on the computer that you tested positive for Covid?" the officer asks.
"Yes," the student answered, adding "This was, um, a week ago."

The officer asks the student whether he was supposed to be quarantining, and the student said that's why he was at home.

"Do you have other people here and you're positive for Covid? You see the problem?" the officer asks.

Other people at the house had also tested positive for the virus, the student told the officer.

Six people, five of whom lived at the house, were issued a citation, according to the police report. The Oxford Police Department told CNN in an email that fines for the citations start at $500.

Five of those cited are listed in Miami University's web directory as students. The police report indicates that the sixth person identified himself as a student who had moved in with his parents and was visiting for the weekend. 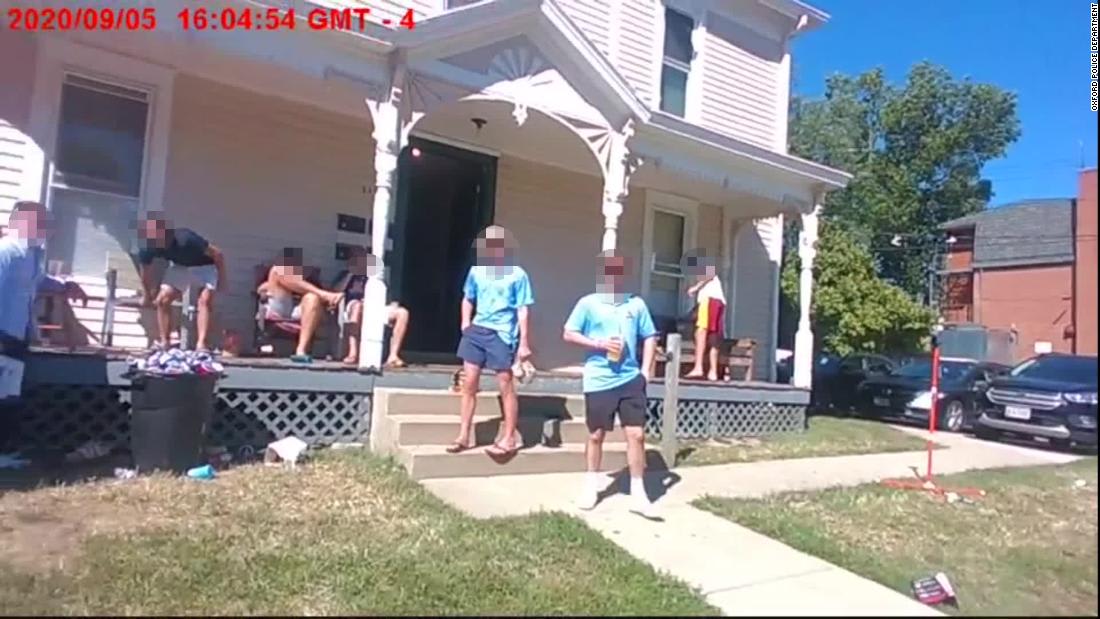