Cuba's Foreign Minister Bruno Rodriguez Parrilla has said that “irresponsible behavior” conducted by the United States is the biggest threat to international peace and security.

The minister’s comments were in a pre-recorded speech addressing a high-level meeting to commemorate the 75th anniversary of the United Nations.

"While refusing to cooperate to confront the multiple crises generated by the devastating Covid-19 pandemic, the United States ignores important agreements in the areas of environmental protection, disarmament and arms control," Parrilla said.
“And it withdraws from international forums such as the World Health Organization, UNESCO or the Human Rights Council. It would seem that it is at war with the entire planet, its vital resources, and its inhabitants."

Parrilla also accused the US of attacking Cuba's international medical cooperation and said the country was "inhibiting the rights of other nations health, well-being."

He said the US was the "epicenter of the Covid-19 pandemic that has already taken a toll on the lives of some 200,000 US citizens as a result of its irresponsibility and electoral opportunities present."

New arrivals to Taiwan might be forgiven for thinking they've stepped back in time.

On the streets of the island's capital, Taipei, pedestrians appear more concerned with staying out of the hot midday sun than maintaining any semblance of social distancing. Large lines stretch along the sidewalks, as people cram into popular lunchtime eateries. And in nearby parks, large groups of young people exercise and practice dance routines.

In fact, there are few if any visible signs that this is 2020 and the world is in the grip of a raging pandemic.

As the global number of confirmed Covid-19 cases surpasses 30 million, residents of Taipei seem relaxed in the knowledge there has been only one suspected case linked to local transmission in the city since mid-April.

One of the main reasons for Taiwan's success in containing the virus is speed.

The island's leaders were quick to act as rumors spread online of an unidentified virus in the Chinese city of Wuhan and unconfirmed reports of patients having to isolate.

Taiwan's early response means everyday life on the island is now very different from a lot of places worldwide where leaders weren't quick to act. 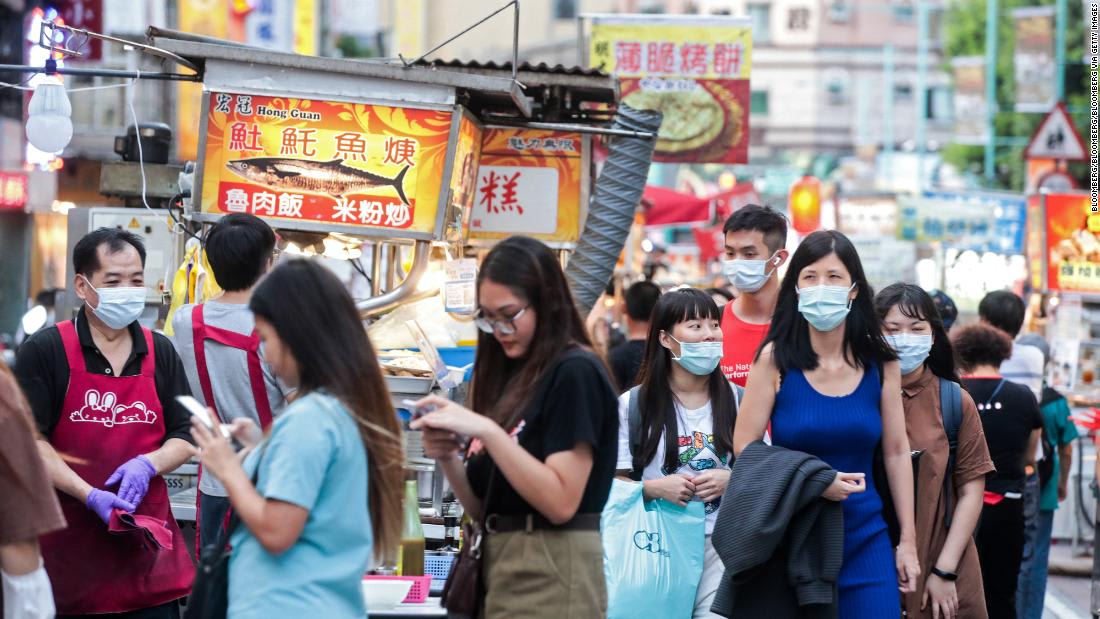 Taiwan offers a glimpse into a post Covid world

A live audience is always difficult to impress, perhaps even more so in the age of social distancing.

An opera in Madrid was halted on Sunday night after audience members protested over concerns that seating was too crowded in the venue.

The Teatro Real in Spain's capital city was forced to cancel the performance of Giuseppe Verdi's "Un ballo in maschera" after a group of spectators staged a protest during the performance, eventually ending the show and closing the venue for the night.

Police officers were called to the site on Sunday.

The venue said Monday that it "greatly regrets what happened" but attributed the upset to shifts in the city's health regulations.

In July, the theater hosted performances of another Verdi opera, "La Traviata," and spaced out audience members by sealing off some chairs and placing empty chairs between each pair of occupied seats, it said.

But it relaxed its seating policy after the city eased coronavirus restrictions, allowing some venues to host bigger audiences. On Sunday, the Teatro Real was at 65% capacity, still below city guidelines that allow such venues to fill up to 75% of normal capacity, it said. Audience members were allowed to freely choose their seats, though they wore masks during the performance. 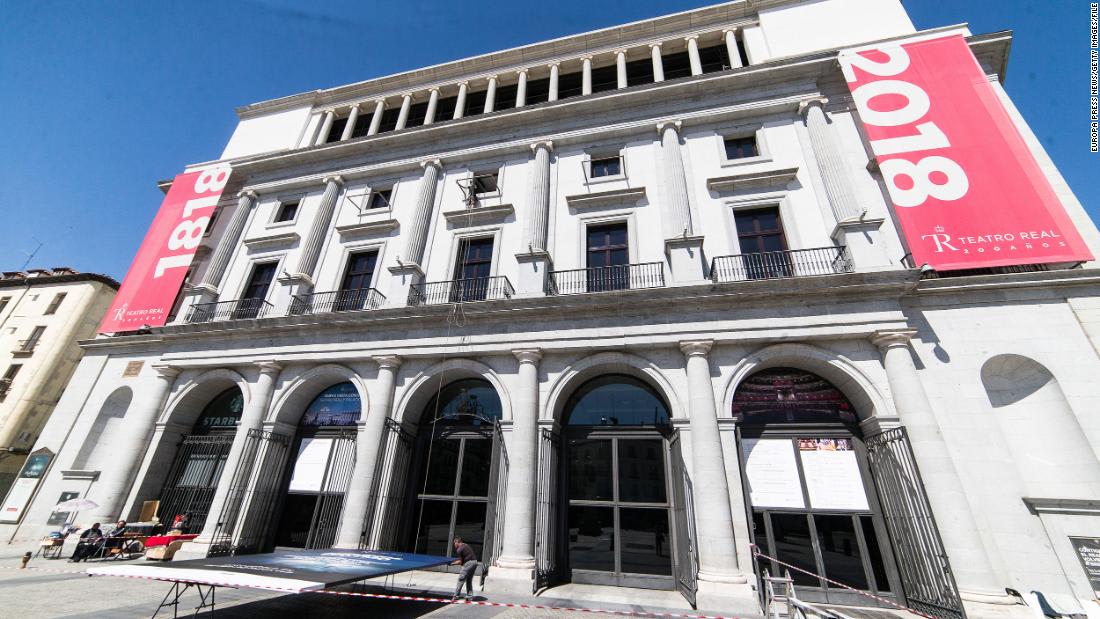 The US Centers for Disease Control and Prevention's abrupt reversal on Monday to previous guidance about how the coronavirus is transmitted -- saying the updated advice was posted in error -- reinforces Americans' concerns that no one is in charge at the leading health agency, former CDC Acting Director Dr. Richard Besser said.

“This was an example of an error, but it feeds into the issue of trust,” Besser told CNN’s Erin Burnett. “And once you have trust that's been broken, it's extremely hard to get that back.

“I worry about people questioning great science that CDC puts out because they're not sure what's great science and what has the fingerprints of politics all over it and that's very, very concerning," Besser said.

The former CDC acting director said the quick changes to transmission guidance raise concern about virus control efforts and what aerosol transmission means for ventilation in schools and office buildings.

Without a daily media briefing, there’s no way to get answers from the agency to important questions, he said.

“It just feeds into this issue of, of distrust and concern that that no one's really in charge.”

Canadian health officials across the country have pleaded with the public to stay home, stick to your bubble and mask up, as daily positive cases continue to climb to levels not seen since May.

Officials in the province of Quebec and in the country’s capital, Ottawa, have declared that a second wave has already taken hold in their cities and communities.

Canada’s seven-day average is now just under 1,000 cases per day according to Johns Hopkins University and the Public Health Agency of Canada.

“I’m telling you that right now the curve is not the way it was in the spring but it’s still pretty bad and I think that this is the beginning of a second wave. If we don’t do something it’s going to go up even more and I’m telling you that will not be fun,” said Dr. Horacio Arruda, Quebec director of public health, during a news conference in Quebec City Monday.

What's behind the spike? Public health experts say Canadians are having too many close, social contacts between family and friends and young people are gathering in groups that are too large to contain the spread. The spike in cases comes two weeks after the Labor Day holiday and as a majority of Canadian children return to in-person learning in schools.

Young are getting sick: Canadian government statistics show that about two thirds of new, positive cases of Covid-19 are detected in people under the age of 40.

Restrictions to be enforced: In cities like Toronto, Montreal and Ottawa, city officials, bylaw officers and police say they are stepping up enforcement of strict protocols that limit indoor, private gatherings to six or 10. In Ontario the minimum fine for breaking the rules is $7,500.

Officials say hospitalizations have crept up but are stable and add they will wait for more data before deciding if or when to bring in more closures or restrictions.

German Chancellor Angela Merkel called for global cooperation to fight the coronavirus pandemic, saying, “The Covid-19 pandemic is just one example which shows that global problems call for understanding and cooperation beyond national borders and at all levels.”

Her comments came in a pre-recorded speech as she addressed the high-level meeting to commemorate the 75th anniversary of the United Nations.

Merkel also said that those who believe they can go it alone are mistaken, warning that the United Nations is only as effective as its member are united.

“Our wellbeing is something that we share – our suffering too. We are one world,” said Merkel.

The chancellor also repeated her push to add Germany to an expanded Security Council, saying reform is needed to solve the global challenges of the 21st century.

Pubs, bars, restaurants and other hospitality venues in England will have to close by 10 p.m. local time each night to tackle the surge in coronavirus cases in the country.

Prime Minister Boris Johnson is expected to make that announcement on Tuesday. The measures would go into effect on Thursday.

During an address to the nation, Johnson is also expected to say the hospitality sector will be restricted by law to table service only, according to a Downing Street statement ahead of the speech.

Johnson is also expected to sign off on Monday’s recommendation to raise the Covid Alert Level from 3 back to 4 during a Covid strategy meeting on Tuesday.

Level 4 means the virus is “in general circulation, transmission is high or rising exponentially."

“No-one underestimates the challenges the new measures will pose to many individuals and businesses. We know this won’t be easy, but we must take further action to control the resurgence in cases of the virus and protect the NHS,” a No 10 spokesperson said in the statement.

Johnson is expected to address the nation with a pre-recorded speech at 3 p.m. ET Tuesday.

Prior to Johnson’s planned address to the nation, a meeting with his Cabinet and the First Ministers of Scotland, Wales and Northern Ireland will take place Tuesday morning “to discuss the surge in cases."

There have been more than 4,500 positive cases of Covid-19 among students and staff at Texas public schools since the 2020-21 school year began, according to new data from the Texas Education Agency (TEA).

At least 2,352 of those cases are students – out of more than 1.1 million Texas public school students who have been on campus since the first week of school. The number of cases has been rising steadily since the beginning of August, with at least 995 new cases reported last week alone.

Some background: Public schools, which resumed in Texas anywhere between the end of July and mid-September, are required to report new cases of Covid-19, according to the TEA's public dashboard, which will be updated weekly. The dashboard says its data is self-reported by schools and does not include cases from private schools.

Some of the state's largest school districts, including Dallas and Houston, have not yet returned for in-person learning.

The US Centers for Disease Control and Prevention guideline change Monday about aerosolized transmission of coronavirus was not the result of political pressure, according to a federal official familiar with the situation.

“This was totally the CDC’s doing,” the official said. “It was posted by mistake. It wasn’t ready to be posted.”

The official said the guideline change was published without first being thoroughly reviewed by CDC experts.

“Somebody hit the button and shouldn’t have,” the official said.

The official added that the guidance is “getting revised,” but didn’t say when the revision would be posted to the CDC’s website.

What the guidance says: The guidance pertains to the way the novel coronavirus is spread. While it’s known it can spread by droplets directly between people standing less than 6 feet apart, there’s been some debate about whether the virus can suspend in aerosolized particles in the air and transmit to people further than 6 feet away.

The agency tried to further clarity what it meant by aerosol transmission, the official said.

“It can occur, but it’s not the way the virus is primarily being transmitted,” the official said.

But in the effort to say that, it was written in such a way “that it’s being understood to mean it’s more transmissible than we thought, which is not the case.”

The source said the guidance that was posted by mistake on Friday wasn’t noticed over the weekend, and CDC became aware of it Monday through reporters’ calls.