Canadian health officials across the country have pleaded with the public to stay home, stick to your bubble and mask up, as daily positive cases continue to climb to levels not seen since May.

Officials in the province of Quebec and in the country’s capital, Ottawa, have declared that a second wave has already taken hold in their cities and communities.

Canada’s seven-day average is now just under 1,000 cases per day according to Johns Hopkins University and the Public Health Agency of Canada.

“I’m telling you that right now the curve is not the way it was in the spring but it’s still pretty bad and I think that this is the beginning of a second wave. If we don’t do something it’s going to go up even more and I’m telling you that will not be fun,” said Dr. Horacio Arruda, Quebec director of public health, during a news conference in Quebec City Monday.

What's behind the spike? Public health experts say Canadians are having too many close, social contacts between family and friends and young people are gathering in groups that are too large to contain the spread. The spike in cases comes two weeks after the Labor Day holiday and as a majority of Canadian children return to in-person learning in schools.

Young are getting sick: Canadian government statistics show that about two thirds of new, positive cases of Covid-19 are detected in people under the age of 40.

Restrictions to be enforced: In cities like Toronto, Montreal and Ottawa, city officials, bylaw officers and police say they are stepping up enforcement of strict protocols that limit indoor, private gatherings to six or 10. In Ontario the minimum fine for breaking the rules is $7,500.

Officials say hospitalizations have crept up but are stable and add they will wait for more data before deciding if or when to bring in more closures or restrictions.

As most US states head in the wrong direction with coronavirus, the Centers for Disease Control and Prevention has retracted key information about how the virus spreads.

The US is on the brink of 200,000 coronavirus deaths, with the number of new cases rising in 28 states, according to data from Johns Hopkins University.

"We may be in for a very apocalyptic fall, I'm sorry to say," said Dr. Peter Hotez, dean of the National School of Tropical Medicine at Baylor College of Medicine.

"And it's happening because we're forcing schools to reopen in areas of high transmission. We're forcing colleges to reopen, and we don't have the leadership nationally, telling people to wear masks and to social distance and do all the things we need to do."

Dr. Jeanne Marrazzo, director of the division of infectious diseases at the University of Alabama at Birmingham, said she agrees this fall "could be apocalyptic" after recent spikes.

"Why are we going back up? I think there are a few reasons," Marrazzo said.

"One is that there is general fatigue. People are really tired of this," she said. "And then the second thing is ... the completely contradictory messages that we're getting -- not just the misinformation, but also the confusion about how things are spread."

CDC reversal: She cited a recent update from the CDC that said you can get Covid-19 just by inhaling tiny particles from an infected person's breath that linger or travel in the air.

"There is growing evidence that droplets and airborne particles can remain suspended in the air and be breathed in by others, and travel distances beyond 6 feet," the CDC's website said in an update Friday. "In general, indoor environments without good ventilation increase this risk."

Many doctors have known that for months -- hence their pleas for the public to wear masks.

"The updated guidance would have been fine if it came out last May," Hotez said. "We knew all of these things months ago."

But by Monday afternoon, the CDC's update was removed. 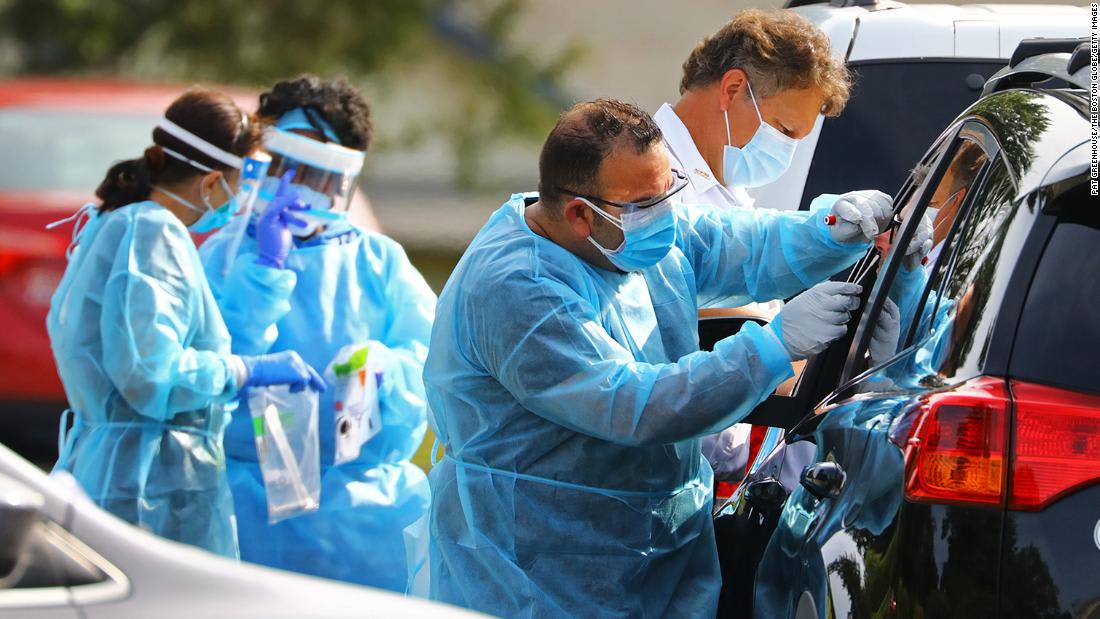 More than half of states are reporting more new coronavirus cases as the US nears 200,000 deaths

Pubs, bars, restaurants and other hospitality venues in England will have to close by 10 p.m. local time each night to tackle the surge in coronavirus cases in the country.

Prime Minister Boris Johnson is expected to make that announcement on Tuesday. The measures would go into effect on Thursday.

During an address to the nation, Johnson is also expected to say the hospitality sector will be restricted by law to table service only, according to a Downing Street statement ahead of the speech.

Johnson is also expected to sign off on Monday’s recommendation to raise the Covid Alert Level from 3 back to 4 during a Covid strategy meeting on Tuesday.

Level 4 means the virus is “in general circulation, transmission is high or rising exponentially."

“No-one underestimates the challenges the new measures will pose to many individuals and businesses. We know this won’t be easy, but we must take further action to control the resurgence in cases of the virus and protect the NHS,” a No. 10 spokesperson said in the statement.

Johnson is expected to address the nation with a pre-recorded speech at 3 p.m. ET Tuesday.

Prior to Johnson’s planned address to the nation, a meeting with his Cabinet and the First Ministers of Scotland, Wales and Northern Ireland will take place Tuesday morning “to discuss the surge in cases."

Last week, The World Health Organization warned that coronavirus cases are surging alarmingly in Europe, with infections spiking to new highs. Many European governments imposed strict local measures in response and began weighing further lockdowns in a bid to halt a second wave of the pandemic.

Here's what we know about where the pandemic and new restrictions stand this week: