Restaurants will be able to use sidewalks and streets for seating for years to come, the mayor said.

This announcement comes as indoor dining, at limited capacity, is set to begin next week.

The mayor said restaurants will be able to add heating lamps to keep the area warm, but if restaurants completely enclose the outdoor space they will have to adhere to indoor dining guidelines.

De Blasio appeared on the radio show to take questions from the community.

Iran’s Health Ministry spokeswoman Sima Sadat Lari said on Friday that an additional 207 Iranians have died from coronavirus over the past 24 hours, bringing the death toll across the country since the pandemic began to 25,222 deaths.

The spokeswoman also announced that at least 3,563 new Covid-19 cases were registered in the past 24 hours, bringing total infection to 439,882.

CNN cannot verify the figures from other independent sources.

Virginia Gov. Ralph Northam and his wife, first lady Pamela Northam, have tested positive for Covid-19, according to a statement from the governor’s office.

Northam is not experiencing any symptoms, but his wife has mild symptoms, the statement said.

“Both remain in good spirits,” the statement says.

The governor and first lady will isolate for the next 10 days and evaluate their symptoms. They were notified on Wednesday that a member of their residence staff tested positive for coronavirus.

“As I’ve been reminding Virginians throughout this crisis, COVID-19 is very real and very contagious,” Gov. Northam said in the statement. “The safety and health of our staff and close contacts is of utmost importance to Pam and me, and we are working closely with the Department of Health to ensure that everyone is well taken care of. We are grateful for your thoughts and support, but the best thing you can do for us—and most importantly, for your fellow Virginians—is to take this seriously.”

Scottish First Minister Nicola Sturgeon says students are not to blame for the spread of Covid-19 in Scotland despite being banned from bars and restaurants and thousands being forced to self-isolate at campuses.

“I know some of you feel as if you're being blamed for the spread of Covid right now, but that's not the case. You don't deserve to be facing this, nobody deserves to be facing this right now, and it's not your fault,” she said at the Government’s daily news briefing on Friday.

Students in shared accommodation must not mix with other households. In addition, all students — not just those living on campus — must stay out of bars and restaurants and cafes this weekend.

It comes as several universities across the country report major outbreaks of infections.

Sturgeon also said she supports universities taking disciplinary action against students who breach these guidelines “as a last resort.”

Large indoor gatherings are now an offense in Scotland, and Chief Constable Iain Thomas Livingstone made it clear at the briefing that parties will not be tolerated: “Where officers encounter blatant, willful, persistent breaches, we will act decisively. We will enforce the law.”

Scotland reported a record number of daily cases on Friday, at 558.

Sturgeon warned that “we will see campus cases continue to rise in the days to come, but if we take steps now to limit the interaction we can help stem that flow” and urged students to “please do what is being asked of you.”

California is now the first US state to surpass 800,000 cases of Covid-19, according top data from Johns Hopkins University. At least 15,405 people have died.

California became the first state to surpass 700,000 cases on August 29.

Here's a look at how California's figures compare to other states: 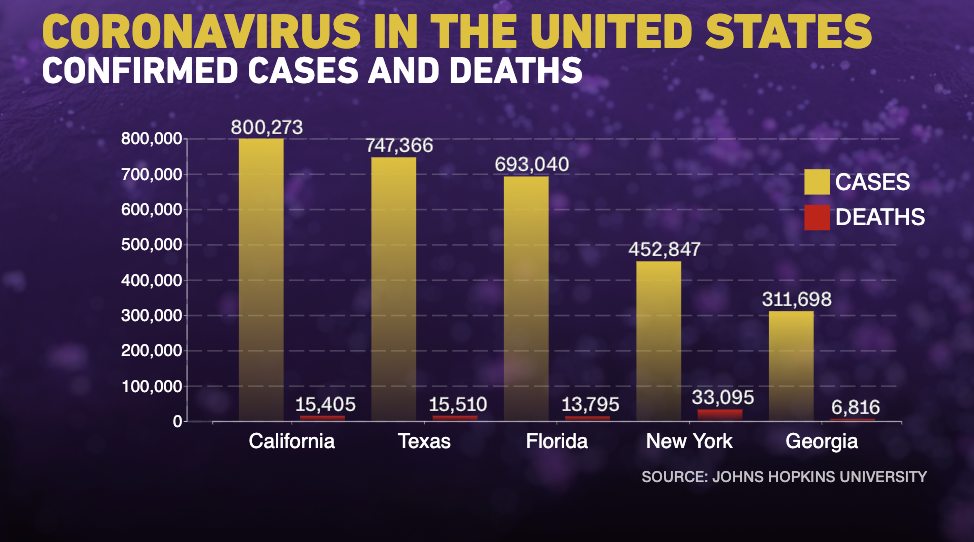 At this point in the coronavirus pandemic, with more than 32 million infected and more than 980,000 dead worldwide, describing this time as "unprecedented" may sound like nails on a chalkboard.

This pandemic, however, actually isn't without precedent: The last time we dealt with a pandemic so mysterious, uncontained and far-reaching was in 1918, when influenza devastated populations around the globe.

The 1918 flu killed 50 million to 100 million people through 1919. There are eerie parallels between the 1918 flu and the 2020 coronavirus pandemic: a disease with a startling range of symptoms for which there is little treatment, human behavior as a hindrance to public health and cluster outbreaks that have become widespread, to name a few.

For 102 years, influenza scholars and infectious disease experts have attempted to educate the masses in hopes of preventing future pandemics. And yet, here we are.

To be clear, the coronavirus at fault for the current pandemic isn't a flu virus. And yet the 1918 and 2020 pandemics share similarities in terms of their basis on a novel, formidable virus that took the world and every aspect of society by storm. To learn the lessons of the 1918 flu, the missteps we've taken since and our post-pandemic future, CNN spoke with three experts on the subject. 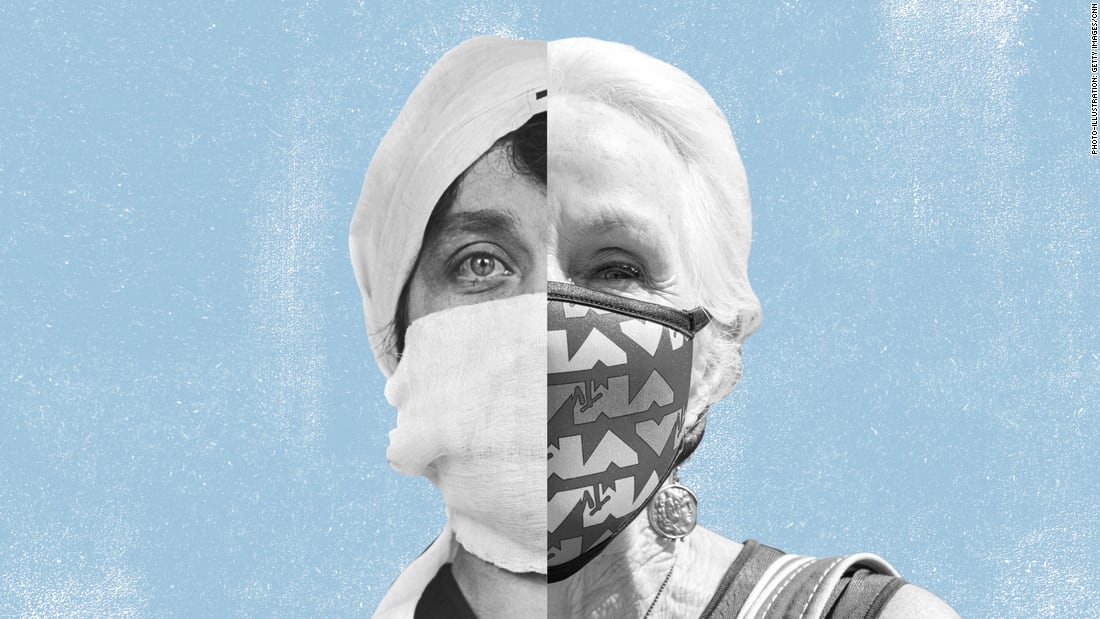 What the 1918 flu pandemic can teach us about coronavirus

One of India's most renowned film singers, SP Balasubrahmanyam, has died following hospitalization for Covid-19 and weeks spent on life support, the hospital treating him said in a bulletin Friday.

Balasubrahmanyam had been on life support since August 14 for severe Covid-19 pneumonia and was being closely monitored by health workers in a critical care unit, Anuradha Baskaran, Assistant Director of Medical Services at MGM Healthcare in Chennai, southeastern India, said in a statement.

"In a further setback this morning, despite maximal life support measures and the best efforts of the clinical team, his condition deteriorated further and he suffered a cardio-respiratory arrest," Baskaran said.

Balasubrahmanyam died just after 1 p.m. local time on Friday, Baskaran said, adding that she was announcing the news "with profound grief."

A leading figure in Indian cinema, Balasubrahmanyam, known to fans simply as "SPB" or "Balu," has more than 1,000 credits as a playback singer -- a voice artist who records songs that are later mimed by actors in films -- in languages including Telugu, Tamil, Hindi, English, Bengali and Punjabi. 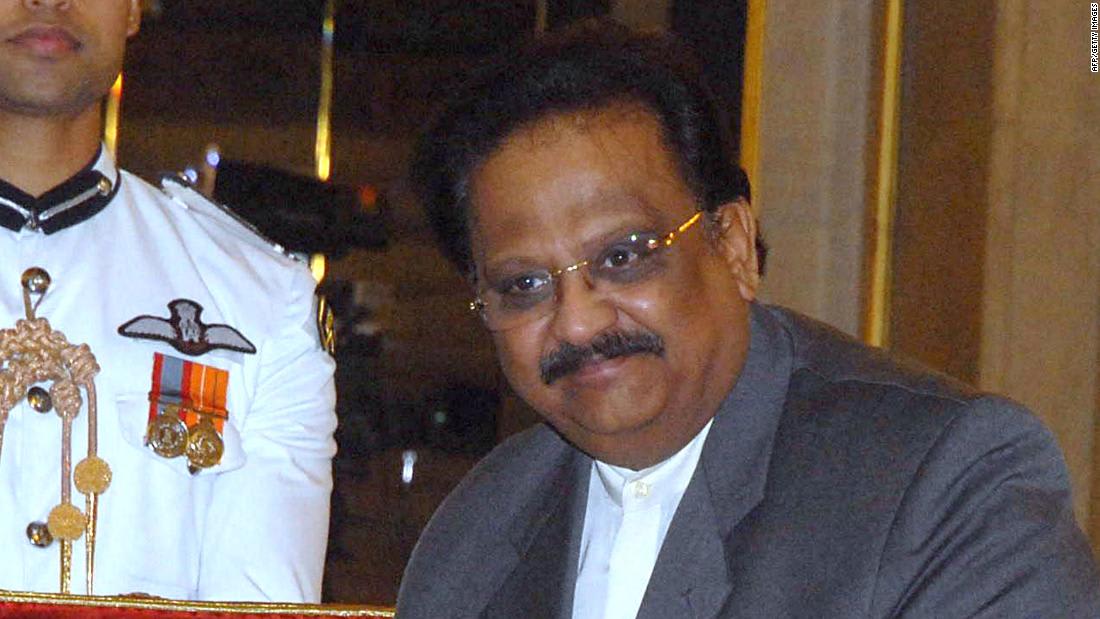 The coronavirus pandemic is slamming the vast property empire that provides Queen Elizabeth II with a significant chunk of her income. British taxpayers could be making up the shortfall for years to come.

Michael Stevens, the Queen's treasurer, confirmed in a statement on Friday that the size of the Sovereign Grant, one of the royal family's major sources of income, won't be affected by an expected slump in profits from the Crown Estate's investments.

Last week, the Crown Estate reported a record profit of £345 million ($440.2 million) for the year to March 2020, but warned that earnings for the fiscal year to March 2021 will be "significantly down" on that amount due to the impact of the pandemic on its portfolio.

Much of central London was turned into a ghost town earlier this year as the lockdown kept millions of workers, shoppers and tourists away. Activity was beginning to pick up over the summer months but new restrictions introduced this week to combat a second wave of the virus are expected to dent that recovery.

But the Queen won't be taking a pay cut even if income falls at the Crown Estate this year. The way that the grant is calculated means that she will receive her share of £345 million — £86.3 million ($110 million) — in the year to March 2022. Her payout will also remain at that level in future years, even if the Crown Estate's profit remains under pressure, because the law governing the grant does not allow it to fall in absolute terms.

"In the event of a reduction in the Crown Estate's profits, the Sovereign Grant is set at the same level as the previous year," a Treasury spokesperson told CNN Business. "The Sovereign Grant funds the official business of the Monarchy, and does not provide a private income to any member of the royal family," the spokesperson said. 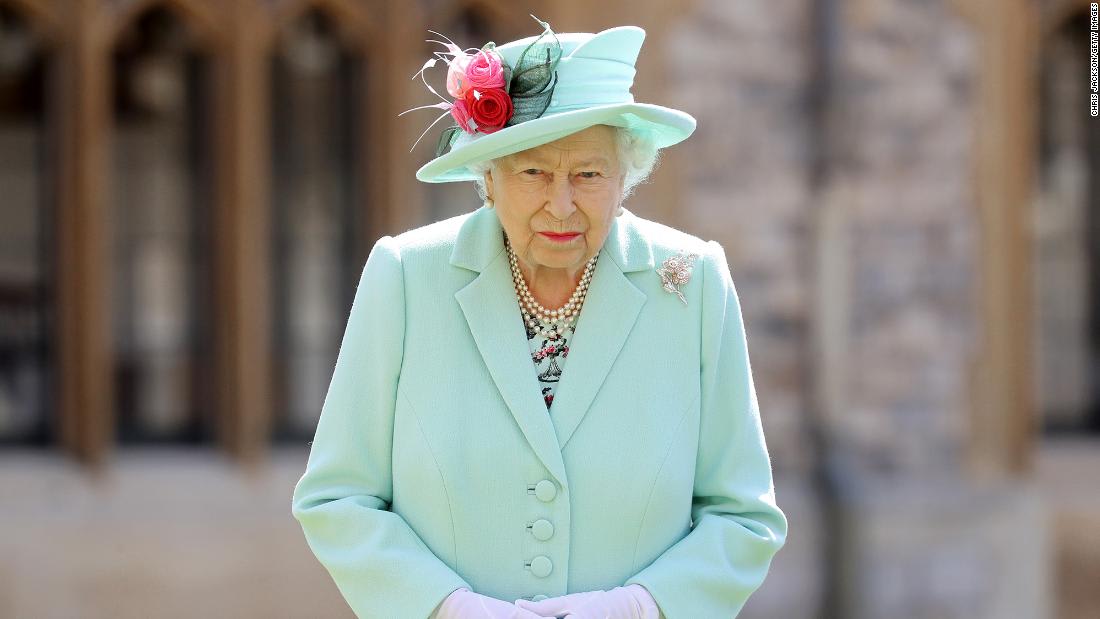 The Queen's real estate portfolio is being slammed by the pandemic. Taxpayers will bail her out

Tokyo 2020 Olympic organizers are proposing to cut the number of officials at next year’s postponed Summer Games by 10-15% as part of a wider package of proposals aimed at reducing costs and streamlining the event for a post Covid-19 world.

More than 50 simplification measures were proposed by the IOC Coordination Commission at a virtual news conference Friday between the International Olympic Committee and the Tokyo 2020 officials.

These are some of the proposed measures:

Although the length of the 121-day torch relay will not be shortened, the number of staff present and use of official vehicles will be reviewed.