At least 7,078,089 people have been infected with coronavirus in the United States, including at least 204,490 deaths, according to Johns Hopkins University's tally.

The global death toll from coronavirus now stands at 994,216, according to JHU figures.

As Florida restaurants and bars enjoyed their first full day of operation without Covid-19 restrictions in months, the mayor of Miami warned that the governor's decision to fully reopen such establishments and to limit local governments' ability to enforce their own restrictions could have devastating consequences.

"I think it's going to have a huge impact," Mayor Francis Suarez told CNN on Saturday about Florida Gov. Ron DeSantis' decision to allow restaurants, bars and other businesses to open at full capacity and to suspend fines for all outstanding penalties issued to those who didn't follow Covid-19 restrictions -- such as not wearing a mask in public. "You know, I just don't know how many people are actually going to do it now."

DeSantis signed an executive order on Friday evening allowing restaurants and bars to immediately begin operating at 100% capacity. He cited the economic hardships of not operating businesses at full capacity, according to the order.

Suarez said mandating mask wearing in public and slowly reopening has helped to keep the coronavirus case count down in Miami.

There have been nearly 700,000 cases of coronavirus in Florida and the virus has killed more than 14,000 people in the state, according to data from Johns Hopkins University.

Nationwide, more than 7 million people have been infected and 204,497 have died.

Suarez said he's concerned that the changes in the state are coming as flu season ramps up and schools prepare for in-person learning to begin in mid-October.

A door-to-door Covid-19 survey in Minnesota has been halted after team members reported receiving racial and ethnic slurs in the city of Eitzen, according to state health officials, but the city denies the claims.

"A door-to-door Covid-19 testing survey has been halted due to multiple incidents in outstate Minnesota of residents intimidating and shouting racial and ethnic slurs at state and federal public health survey team," the Minnesota Department of Health (MDH) tweeted Friday.

Eitzen is in southern Minnesota near the Iowa boarder.

The Community Assessment for Public Health Emergency Response (CASPER) survey is "a voluntary, in-person survey to understand the effect Covid-19 is having on Minnesota communities," the MDH website says.

The new cases mark the highest daily raise in infections in Japan in over two weeks, according to the health ministry.

Of the 644 new cases, 270 were found in Japan’s capital Tokyo, the ministry said.

Japan now has a total of 82,402 confirmed cases and 1,558 deaths, according to the health ministry.

All students living on-campus in the US' west coast will be tested for the virus, and in-person classes have been canceled for the next two weeks, CSULB President Jane Close Conoley said in a letter to the university's community.

The decision comes after school officials learned that "a number of students who have not heeded our guidance related to Covid-19 precautions and congregated socially off campus earlier this month," Conoley said.

Five of those students have tested positive, Conoley said, and four of them live at the university's residence halls.

The quarantine will impact about 1,000 students who are living on campus for the fall semester and an estimated 3,000-4,000 students who attend in-person classes, according to the university's safety measures. 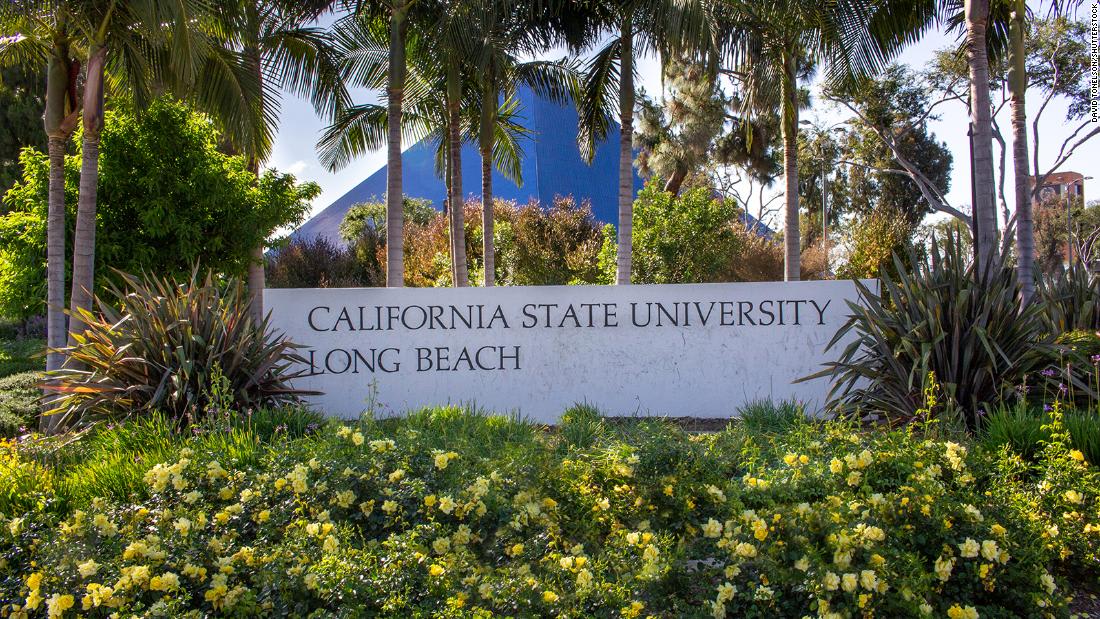 The Australia city of Melbourne will begin easing lockdown measures at midnight on Monday local time as the city continues to see a drop in coronavirus cases and deaths.

“Seven weeks ago, our average case numbers were peaking at more than 400 every single day. Today, Melbourne’s rolling case average is 22.1. It’s a remarkable thing -- and an achievement that belongs to every single Victorian,” State Premier Daniel Andrews said in a statement Sunday.
“Thanks to those efforts, and on the advice of our public health team, I can confirm that from 11:59 p.m. tonight (Sunday), Melbourne will enter the Second Step towards reopening,” Andrews said.

What are the changes:

Despite the easing of restrictions, Premier Andrews said “none of these changes though are a sign we can take our foot off the pedal,” and he emphasized that people should continue to wear face coverings across the city.

Dr. Leana Wen, an emergency physician and public health professor at George Washington University has criticized US President Donald Trump’s event in the White House Rose Garden on Saturday, saying, “If I were to custom design a super spreader event, this is what it would look like."

Speaking to CNN’s Ana Cabrera, Wen, who was previously Baltimore's health commissioner, said she was “very concerned” about the video she saw showing “a lot of people coming from many parts of the country, gathered together, no social distancing, not wearing masks.”

“Because it's not just what they do during the event,” Wen said, but what happens when they return home and potentially spread the virus.

Alex Azar, secretary of the US Department of Health and Human Services, attended the event and was seen un-masked and fist-bumping people.

“He represents all the agencies that fall under HHS -- the CDC, the FDA, the NIH -- all these top scientists and public health officials,” Wen said. “What's going through their minds as they're watching their leader flaunt the very advice that they're giving?”

“He should be modeling the type of behavior that we expect everyone to have at this point,” she added.

Many of the guests for US President Donald Trump's Supreme Court nomination announcement arrived at Saturday's event with masks on, but as the Rose Garden event got underway, masks were virtually non-existent.

Some of the Trump administration's top health officials, as well as other attendees, were seen not wearing masks or social distancing at the highest-profile event at the White House since the Republican National Convention in August.

Seats for guests in the White House Rose Garden at the nomination of Amy Coney Barrett also did not appear spaced apart the recommended six feet, CNN reporters observed, as US deaths from the coronavirus pandemic surpassed 200,000.

Alex Azar, the head of the Health and Human Services Department, put on a mask at one point during Trump's speech announcing the President is nominating Barrett as the nominee.

But as he left the ceremony, the nation's top health official fist-bumped without a mask on — going against the health recommendations he has espoused during the pandemic. Azar has repeatedly encouraged Americans to wear a facial covering and to practice social distancing. 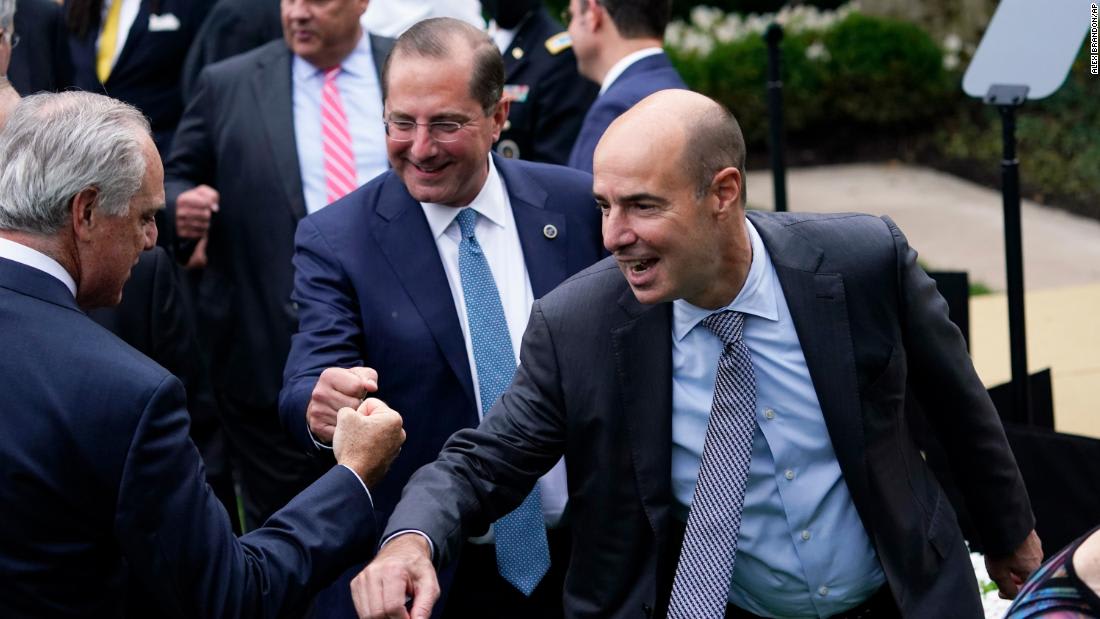 The Trump administration has pivoted away from receiving daily guidance from the White House Coronavirus Task Force to focus more heavily on the economy, US National Institute of Allergy and Infectious Diseases Director Dr. Anthony Fauci said Friday.

“The way things have evolved at the White House is that there has been a pivot away from the reliance on a daily type of a taskforce discussion -- policy making, policy implementation -- more towards how we're going to get this country open again, economically,” Fauci told AIDS activist Peter Staley on Friday during an Instagram Live.

He added that the Task Force has a good level of interaction with the Vice President.

“Obviously it's clear that the Task Force does not meet as often as we used to. We used to meet at one point, 7 days a week, then five days a week. We're meeting now on an average of one and at the most two times a week,” Fauci said.