Once the epicenter of the pandemic in the US, New York had boasted a test positivity rate — the percentage of tests being performed that come back positive for the virus — of less than 1% for more than a month.

State health officials are going to be reaching out in the specific areas and doing additional testing and compliance measures, the governor said.

“Brooklyn is a major contributor,” he added.

“We have specific zip codes in Brooklyn that we’re going to be looking at because its very targeted, and our health officials are going to be reaching out to those Brooklyn communities, Orange and Rockland today to do additional testing and compliance measures in those areas.”

“It is very targeted and very focused in those clusters," he added.

The southern tier “has a blip” tied to 3 clusters, a nursing home, a church gathering “that created issues” and a pub in separate counties, he said.

Cuomo added that 11 more New Yorkers died from Covid-19, and that 543 are hospitalized.

The governor is also signing an executive order requiring the department of health to alert all travelers that the state will have a “mandatory quarantine” for all level 2, and level 3 countries. This is all but 31 countries on the globe, he added.

“We are going to increase our presence,” he said.

His move comes after, as he referenced, the US Centers for Disease Control and Prevention has ended enhanced screening at airports for some international travelers despite “alarming increases in countries around the world.”

He noted France, Spain and Israel by name.

Ontario, Canada’s largest province, reported 700 new Covid-19 cases Monday, a single day record for the province since the start of the pandemic.

The figure represents a significant increase from the previous high of 640 cases reported on April 24.

“While the increase in Covid-19 cases is very unfortunate, it’s also not unexpected. We have prepared for this throughout the summer months, we knew that we were going to see an increase in cases...” Christine Elliott, Ontario’s health minister, said during a session of the Ontario Legislature Monday.

The previous record set in April came during a restrictive lockdown when stay-at-home orders were in place and most non-essential business and schools were closed.

Ontario has reopened most businesses, many with restrictions and the majority of Ontario students are now back to in-person learning.

Nearly half of all cases were reported in Toronto, Canada’s largest city. Ontario reported that nearly 60 % of all new infections Monday were detected in people under the age of 40.

Quebec is reporting a similar surge in Covid-19 cases with the province’s health minister telling a French-language broadcaster Sunday that Montreal and Quebec City will soon be subjected to tighter restrictions.

"Montreal and Quebec City are the hardest hit areas at the moment. They're very close to the red zone," he said in French to broadcaster Radio Canada.

Several European countries, in the throes of a second wave of the pandemic, are witnessing a rise in virus cases, deaths and restrictions. Here's Monday's latest:

Belgium: New rules to prevent the spread of Covid-19 in the Belgian capital, Brussels, come into force today. The city's mayor announced the restrictions on Sunday after Brussels recorded 2,353 infections over seven days and an incidence of 327.7 cases per 100,000 inhabitants over 14 days.

From today, bars, cafes and restaurants will close at 11 p.m.;  gatherings of more than 10 people in public spaces is banned from 11 p.m. to 6 a.m.; and food consumption is prohibited in markets.

From Thursday, it will be compulsory to wear a mask in heavily frequented commercial areas and catering premises, carrying a face mask will be obligatory, and mask wearing will be mandated when entering or leaving schools.

Chancellor Angela Merkel is due to meet with the leaders of Germany's federal states on Tuesday, Seibert said, adding that a possible “traffic light” virus warning scheme would be part of the discussion.

The country saw an increase of 1,192 infections on Sunday and three deaths, according to the disease control and prevention federal agency, the Robert Koch Institute (RKI). At least 285,332 people in Germany have registered as infected since the pandemic started, and there have been 9,460 deaths, according to RKI.

France: Coronavirus admissions at intensive care units in the Provence-Alpes Côte d'Azur region — which includes France's second biggest city of Marseille -- have tripled since the beginning of September, according to official statistics.

Bars and restaurants closed for seven days in the Marseille area, starting Sunday night, due to the deteriorating situation there.

He said at the request of local councils legislation will be introduced to ban "indoor mixing between households in any setting." The changes will apply to parts of the country's northeast where local action was brought in two weeks ago, Hancock explained.

It comes as the UK government reported at least 4,044 new Covid-19 cases and 13 deaths from the virus in the latest 24-hour period on Monday. However, figures typically lag following the weekend. On Monday, a legal duty to self-isolate if people test positive or are contacted by NHS Test and Trace came into force in England.

"What we're seeing here in Dane county is that close to 90 percent of the young people who are getting positive test results are reporting some symptoms and unfortunately a lot of them aren't aware of the long-term consequences that this disease can have," Joe Parisi, county executive of Wisconsin's Dane County, told CNN's Jim Sciutto.

"But as concerning, is the fact that in my community in Dane county, the university is integral to the city of Madison. It is not separated somewhere. So these young people interact with people throughout the community. They have parents and grandparents and go to the store so we're incredibly concerned about the spike that we're seeing," Parisi added.

Last week, Wisconsin Gov. Tony Evers issued an executive order mandating face coverings in an effort to keep infections down. In a news release, his office attributed rising cases primarily to infections among 18- to 24-year-olds and said the state was "facing a new and dangerous phase" of the pandemic.

"We need your help to stop the spread of this virus, and we all have to do this together," Evers said.

The US stock market rallied on Monday, ignoring negative headlines that weighed on the market over the past few weeks in favor of hoping for a stimulus deal out of Washington.

What this is about: Investors are hoping that Congress will agree on a new stimulus deal, despite fruitless negotiations in recent months.

On Sunday, House Speaker Nancy Pelosi told CNN that House Democrats may offer their latest stimulus proposal as legislation if revived talks with the Trump administration do not yield a deal her party can get behind.

Even as investors are feeling good about a possible deal, economists are a bit more pessimistic. Morgan Stanley became the latest bank to downgrade its growth outlook because of the slimming chance of another stimulus bill this year.

But this doesn't mean the worries that pushed stocks lower in the past weeks are gone. In fact, not that much has changed from last week, and volatility remains high. The CBOE Volatility Index, or VIX, is more or less flat Monday but remains in elevated territory even though it has come down from the panic-fueled levels it has hit earlier this year.

The impending presidential election, uncertainty about the future path of Covid-19, worries about rising infections in the winter and a slowdown of the economic recovery have been weighing on the market for weeks.

Almost half of US states are reporting increased numbers of new Covid-19 cases as health experts warn of a potential coronavirus surge in the fall and winter.

According to the latest Johns Hopkins University data:

The US meanwhile could see an explosion of Covid-19 cases in the fall and winter as people exercise less caution and spend more time indoors, where there is a greater likelihood of transmission, according to Dr. Chris Murray, director of the University of Washington's Institute for Health Metrics and Evaluation (IHME).

Murray says the IHME model shows a "huge surge" expected to take off in October "and accelerate in November and December."

The IHME model indicates that the country is currently seeing about 765 daily deaths from Covid-19, but that number could jump to 3,000 daily deaths by late December.

Here's a look at where cases are increasing across the country: 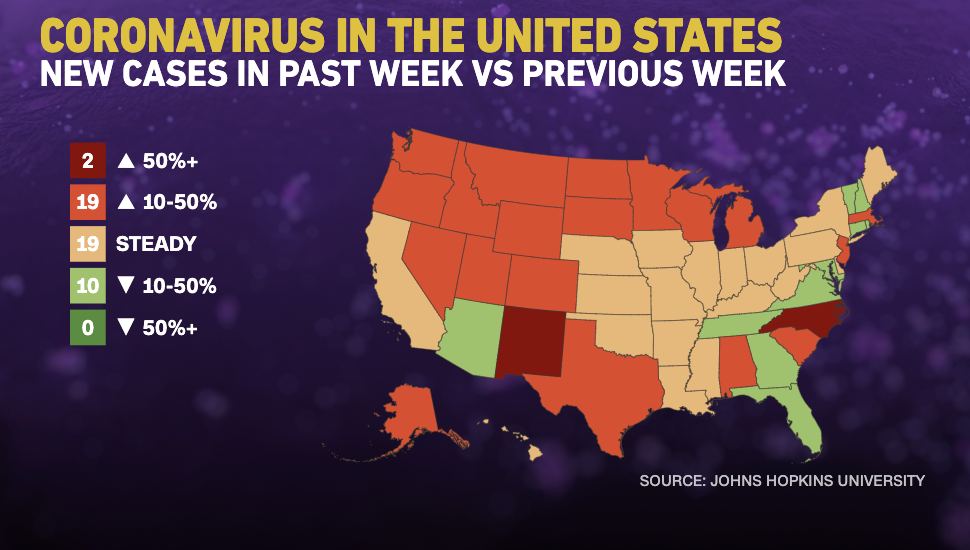 Twenty students have tested positive for Covid-19 at Pace University's Westchester, New York campus, 18 of whom live in the same dormitory, according university spokesperson Marie Boster.

"While this news is obviously unwelcome, we were prepared for it, and have taken actions to protect our students and the community," Pleasantville campus spokesperson Jerry McKinstry said in a press release.

Westchester County required all students to quarantine for two weeks who lived in or had recently left Alumni Hall, the release added.

"We are continuing the rigorous disinfecting and cleaning of our facilities. Faculty will work to accommodate the remote learning needs of all Alumni Hall students,” McKinstry said.

Apart from those who have tested positive, their close contacts, or residents of the hall, Pleasantville campus students are continuing a mix of in-person and remote classes, Boster said.

The biotechnology company Inovio's planned Phase 2/3 coronavirus vaccine trial has been put on a partial hold, the company announced on Monday.

Until the FDA's questions have been "satisfactorily addressed," the Phase 2/3 trial is on partial clinical hold, according to the company announcement.

"The company is actively working to address the FDA's questions and plans to respond in October, after which the FDA will have up to 30 days to notify INOVIO of its decision as to whether the trial may proceed," the announcement says.

"This partial clinical hold is not due to the occurrence of any adverse events related to INOVIO's ongoing expanded Phase 1 study of INO-4800, the conduct of which may continue and is not impacted by the FDA's notification," the announcement says. "In addition, this partial clinical hold does not impact the advancement of INOVIO's other product candidates in development."

Some context: Inovio’s Covid-19 vaccine is being funded, in part, by the US Department of Defense, the Bill & Melinda Gates Foundation, and The Coalition for Epidemic Preparedness Innovations.

The company has not received funding from Operation Warp Speed, the Trump administration’s initiative to fast-track the development and delivery of a Covid-19 vaccine.

NBC News reported Monday that US Centers for Disease Control and Prevention Director Dr. Robert Redfield was overheard during a phone call in public on a commercial airline saying, "Everything he says is false.”

NBC News, which heard the comment, said Redfield acknowledged after the flight from Atlanta to Washington, DC, that he was speaking about Dr. Scott Atlas, a neuroradiologist who joined the White House Coronavirus Task Force in August.

NBC said that Redfield, in the conversation with a colleague on Friday, suggested Atlas is providing President Trump with misleading data about the efficacy of masks, young people’s susceptibility to the coronavirus and herd immunity.

In a statement to CNN, a CDC spokesman did not deny the conversation took place:

"NBC News is reporting one side of a private phone conversation by CDC Director Dr. Robert Redfield that was overheard on a plane from Atlanta Hartsfield airport. Dr. Redfield was having a private discussion regarding a number of points he has made publicly about Covid-19."

CNN has reported that Atlas – a critic of severe lockdowns who was supported herd immunity strategies against the coronavirus – has found himself at odds with other medical experts in his administration, including Dr. Anthony Fauci and Dr. Deborah Birx.

On Friday, Fauci said during an interview that the Trump administration has pivoted away from receiving daily guidance from the White House Coronavirus Task Force to focus more heavily on the economy. “We're meeting now on an average of one and at the most two times a week,” Fauci said.