Olivia Troye, a former top adviser to Vice President Mike Pence, said that some members of the Trump administration continue to shrug off the coronavirus pandemic.

“I think there are still people walking around the White House today who don't actually believe this virus is real. A lot of them disregard it,” she said on CNN’s “New Day.”

More than 205,000 Americans have now died due to Covid-19, according to Johns Hopkins University.

Troye said that the Centers for Disease and Prevention was pushed to play down the risks of Covid-19 in reopening schools.

“What I saw firsthand was a lot of the manipulation of the data, trying to figure out how to tell a story that was less grim than the reality really was,” she said.

She said people in the White House tasked more junior-level staffers to find data to support the narrative that the coronavirus only affects older individuals.

The American people have “been told falsities,” Troye said. “They’ve not been told the truth. They also need to remember this is a person making decisions on how we respond to events like this. And this was a major one. And it was just very poorly handled. [Trump] only cared about himself.”

As governments scramble to contain new surges of Covid-19, the World Health Organization announced on Monday that a new initiative will supply 120 million affordable, rapid antigen tests to low- and middle-income countries.

The tests, which will cost just $5 and deliver results in 15 to 30 minutes, rather than hours or days, could save thousands of lives.

They also have the potential to transform the way governments react to the pandemic, enabling officials to more quickly detect and respond to outbreaks before they spread.

"High-quality rapid tests show us where the virus is hiding, which is key to quickly tracing and isolating contacts and breaking the chains of transmission," Tedros Adhanom Ghebreyesus, WHO director general, said.
"The tests are a critical tool for governments as they look to reopen economies and ultimately save both lives and livelihoods."

The news, which came as the world eclipsed 1 million Covid-19 deaths, is a small ray of hope in the fight against the virus.

This appeared in the September 29 edition of CNN's Coronavirus: Fact vs. Fiction newsletter. Sign up here to receive the need-to-know headlines every weekday.

What you need to know about coronavirus on Tuesday, September 29

The novel coronavirus has now killed more than 1 million people worldwide and infected more than 33 million. Here's what you need to know about the pandemic today:

Coronavirus rates are surging in Paris and the surrounding region, according to the French regional health authority.

France is trying to control a second wave of Covid-19, with cases rising nationally.

France has established three tests for declaring a “zone of maximum alert" in an area.

The city of Paris has already met the threshold for the first test, which is if the incidence rate reaches 250 cases per 100,000 people.

The second criteria is whether 30% of ICU capacity is occupied by Covid-19 patients. The health authority said 344 beds were currently occupied by coronavirus patients in the region. This accounts for 30.7% of total ICU beds.

The third criteria is the incidence rate of the virus among the elderly. The regional health authority says that number is now at 94.5 per 100,000 inhabitants, with 100 per 100,000 being the trigger level.

While the Paris region remains in dangerous territory, France's Marseille region is already on maximum alert -- meaning bars and restaurants have had to close.

French Prime Minister Jean Castex is meeting representatives of bars and restaurants Tuesday, who are protesting tougher restrictions for their establishments.

"We monitor the indicators; If the situation in a territory deteriorates too much, it is our responsibility to take measures to curb the epidemic and protect the population, in conjunction with local elected officials," the Prime Minister’s office told CNN.
"For the moment the thresholds in Paris have not been crossed, but we remain extremely attentive to the evolution of the indicators.”
"So far, no area has been placed in the highest possible category, 'State of Emergency.'"

The new rules will come into force from midnight on Wednesday, with “no exemptions” for weddings and social events.

“No alcohol or food will be served after 10.30 p.m. and all customers must leave by 11.00 p.m.," the country's First Minister Arlene Foster said Tuesday.
"In practice this brings the normal closing times forward by half an hour and there will be no late licenses."
Foster added: “The intention behind the earlier closing time is that socializing later in the evening is considered to increase the risk of virus spreading because people adhere to the rules less strictly after consuming alcohol and in venues where they are used to mixing freely."

The First Minister also said that her government recognizes the risk of the curfew driving people to house parties. But she warned that under current restrictions, social gatherings are illegal.

Northern Ireland has reported more than 10,949 cases and 578 deaths.

A collaboration between the Serum Institute of India (SII), the Bill & Melinda Gates Foundation and Gavi, the Vaccine Alliance, will see an extra 100 million doses of a future vaccine delivered to low- and middle-income countries in 2021, Gavi said in a statement Tuesday.

Gavi is an organization focused on vaccinating children in low-income countries.

Seth Berkley, the company's CEO, said the collaboration would help "ensure no country is left behind when it comes to access to a Covid-19 vaccine.”

No country, rich or poor, should be left at the back of the queue when it comes to Covid-19 vaccines; this collaboration brings us another step closer to achieving this goal,” Berkley said.

The collaboration will provide upfront capital to SII, the world’s largest vaccine manufacturer by volume, to help it increase manufacturing capacity so that, once a vaccine, or vaccines are available, doses can be distributed at scale.

The vaccines will have a ceiling price of $3 per dose for 92 of the world’s low income countries.

Seventy-five countries have formally committed to providing funding to meet part of the cost for procuring the vaccine for poorer nations.

The European Centre for Disease Prevention and Control (ECDC) has added four more countries to its red list on its coronavirus map, meaning those nations have crossed the threshold of 120 infections per 100,000 people in the last two weeks.

The Netherlands, Iceland, Denmark and Hungary were added to list on Tuesday.

The Netherlands has registered 2,921 new infections in the last 24 hours. The country introduced a series of additional measures to fight a second wave, including the closing of all bars and restaurants at 10 p.m.

Iceland reported over 80 new infections during the weekend according to the ECDC, but given the country's small population even the slightest increase in cases can have a significant impact on the infection rate.

Denmark has seen the highest number of new cases in four months, according to the ECDC's data.

The agreement will enable 90% of Nepal’s population to get access to the Russian vaccine, according to the RDIF.

“We are excited to announce our cooperation with Russian Direct Investment Fund," Kishor Adhikari, Director of Trinity Pharmaceuticals, said.

Russia approved the controversial Sputnik-V shot before it went to crucial Phase 3 trials, and its early approval was met with widespread concern worldwide.

"Trinity is waiting for results of the final trial of Sputnik V," Adhikari said.

"As soon as the vaccine is approved by Government of Nepal we will make it available for the population of Nepal,” he added.

The global Covid-19 death toll has crossed 1 million -- and the United States accounts for more than 20%.

It took less than eight months to go from the first reported coronavirus-related death in Wuhan, China, on January 9 to a global death toll of 1,001,800 on early Tuesday morning, according to data from Johns Hopkins University.

The US has been hit hard by the virus, with more than 7.1 million reported infections and 205,085 deaths.

And with recent spikes in cases, health experts warn things could soon get worse in the US. 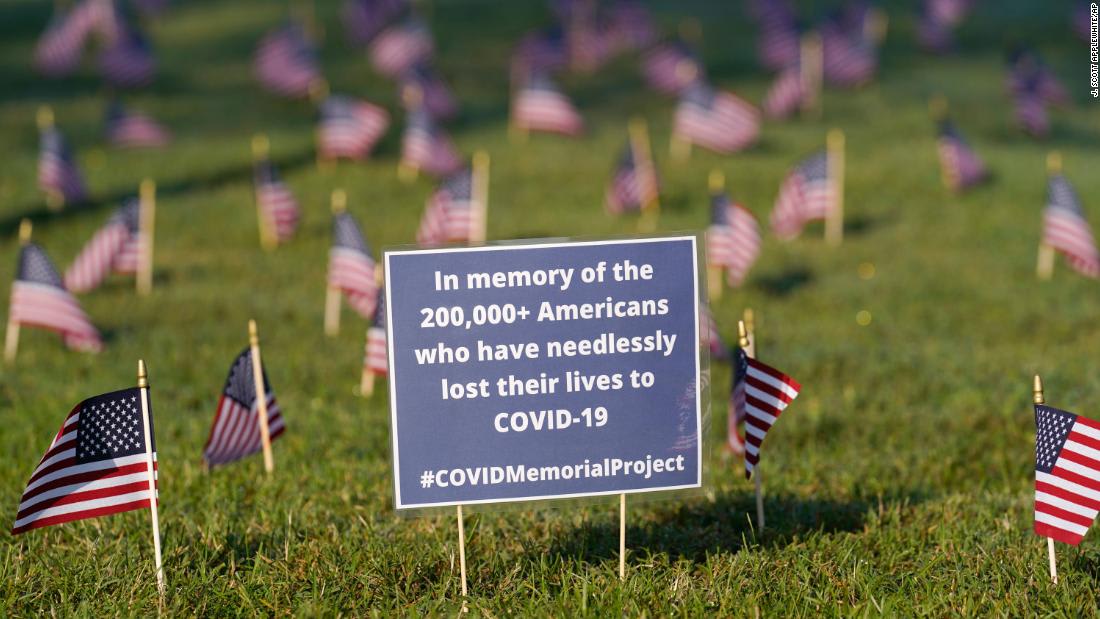