Thousands of students across the UK have been forced into isolation within weeks of arriving for the start of the academic year after mass coronavirus outbreaks were confirmed at university campuses.

Officials linked the hundreds of confirmed cases to illicit parties, but students said it was unfair to blame them when they had received little support from their schools or the government.

Students in Scotland were banned from visiting pubs, bars and restaurants over the weekend and were told there must be no parties or socializing outside their households.

Around 1,700 students at Manchester Metropolitan University (MMU) in northern England were ordered to self-isolate or risk facing "disciplinary action" after 127 Covid-19 cases were confirmed on campus, according to the university and local authorities.

A statement from Manchester City Council on Friday said a decision had been taken with the university and Public Health England to "implement a local lockdown for student accommodation at the Birley campus and Cambridge Halls" in a bid to "stop the transmission of the virus among students and prevent it getting into the wider community."

Students living in two main dorms were asked via email on Friday night to self-isolate in their residences for 14 days regardless of whether or not they have symptoms.

After lawyers raised questions over the legality of enforcing the quarantine, MMU said in a statement: "We are unable to prevent our students from leaving the halls, but our students are bright young adults and we trust that they will do the right thing."

It said it was "developing an additional package of care and financial support to assist students." The university also apologized after reports of students being told via email to remove protest signs from their windows. It said the email "didn't reflect the University's view" and it respected "the rights of students to express themselves," although it said "the posters must not break the law or they'll have to be removed."

Greater Manchester Police said no unlawful posters had been reported. 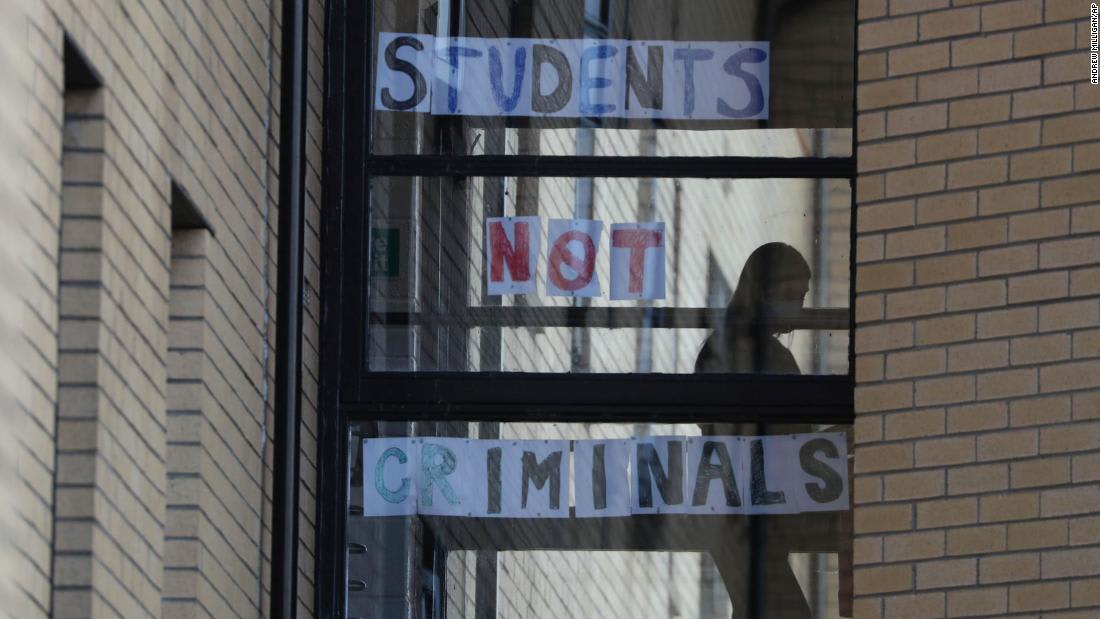 Staffers have tested positive for coronavirus in 150 New York City school buildings, including 106 where employees came into contact with their colleagues, according to the Department of Education.

The employees who tested positive are inclusive of all school staff, said DOE spokeswoman Miranda Barbot.

“While we continue to navigate the realities of a pandemic, there will be positive cases-- we are putting people’s health above everything else by quickly identifying and isolating positive cases to prevent further transmission," Barbot said. "Beginning in October, all schools will have mandatory monthly random testing to continue to keep transmission low and our communities safe.”

More than 1 million people have died from the coronavirus worldwide, marking another milestone in the pandemic's brief but devastating history.

The death toll from the coronavirus, which causes Covid-19, now stands at 1,000,555, according to data from Johns Hopkins University.

The grim tally has been reached in less than nine months since the first death caused by the coronavirus was confirmed by Chinese authorities in the city of Wuhan.

Since then, the virus has disrupted the everyday lives of billions of people around the globe and caused widespread economic damage. More than 33 million cases have been confirmed worldwide and outbreaks continue to plague many countries.

Europe, which became the second epicenter for the virus after China, imposed widespread restrictions on people's movements in the spring in an effort to curb its spread. While the measures had some success, a number of countries that were badly affected early on -- such as France, Spain and the United Kingdom -- are now battling to rein in a second wave.

The United States, with more than 7 million cases and more than 205,000 deaths according to Johns Hopkins University data, has been the worst-affected nation overall.

President Donald Trump is widely viewed as having mishandled the federal response to the pandemic and, despite the country's wealth and advanced health care systems, it has struggled to bring infections under control. Now, some experts fear Trump could pressure scientists into authorizing or approving a Covid-19 vaccine without a full formal review process for political gain.

Trump has repeatedly defended his handling of the pandemic. But he and the White House have been widely criticized for flouting government guidelines designed to limit the transmission of Covid-19, including social distancing and wearing a mask. 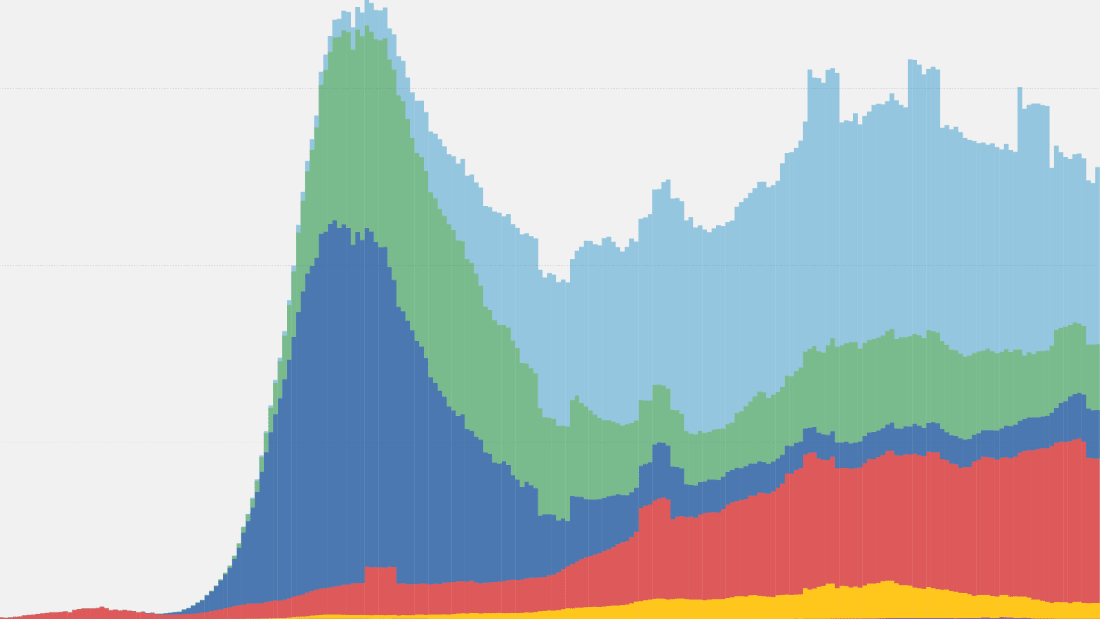 Coronavirus has killed 1 million people worldwide. Experts fear the toll may double before a vaccine is ready

A Chinese doctor who tried to sound the alarm. A father of six who emigrated from Pakistan to the United States to give his family a better life. A 15-year-old boy who left his remote home in the Amazon to study. They all died from Covid-19.

But the tragedy of coronavirus isn’t just in the death toll. It’s also in the grim truths it has revealed about who we are and how we treat our most vulnerable. The pandemic has exposed shocking failures of governance, worsened deep-rooted inequalities in access to healthcare, and inflamed a long-waged war on facts preventing scientists from conveying information that could save lives.

Almost every person in the world has been affected by the pandemic. But it hasn’t drawn us closer -- in many ways, it’s tearing us further apart.

Read more about the victims of coronavirus: 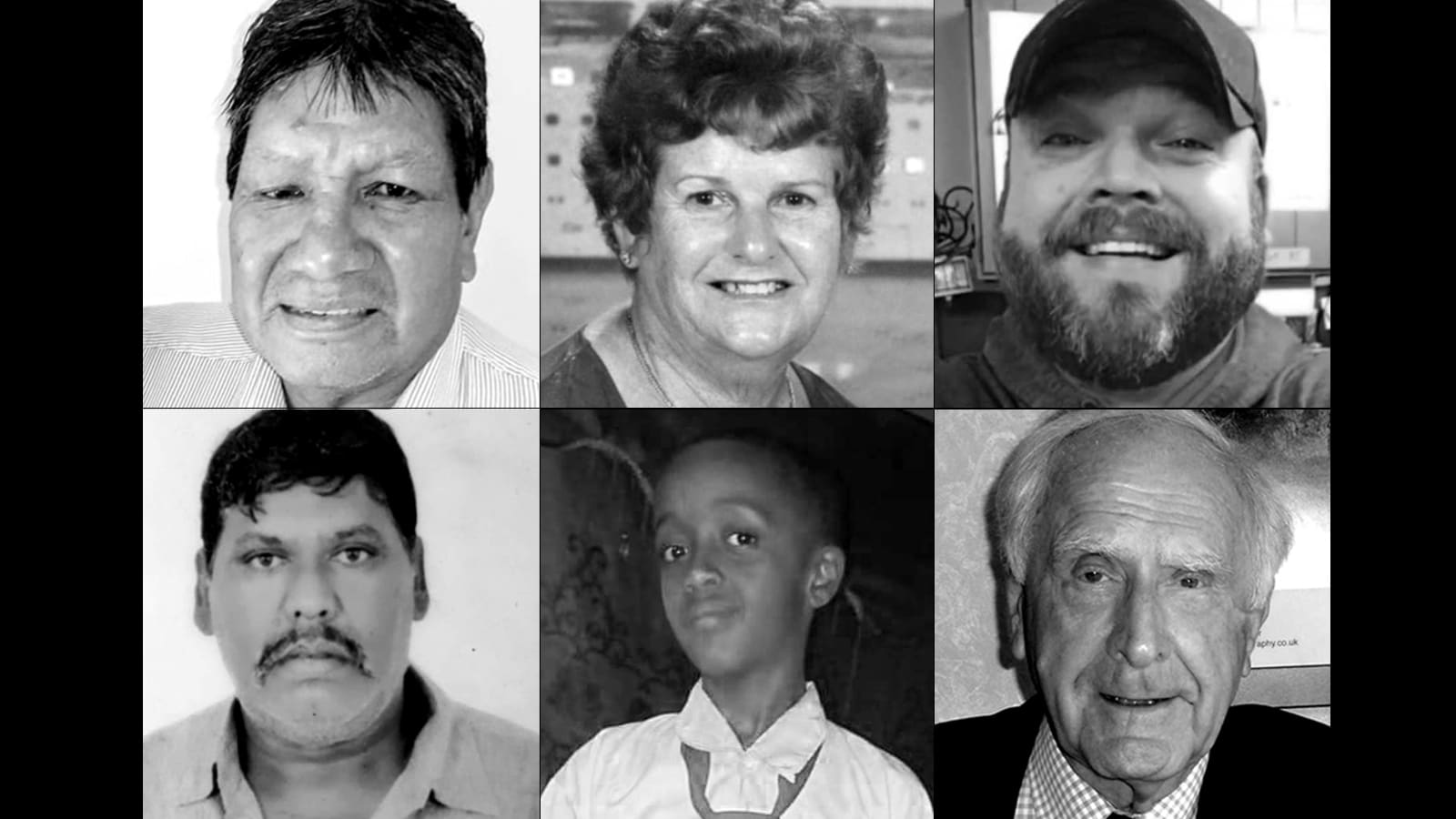 One million dead: How Covid-19 tore us apart

More than 1 million people worldwide have died from Covid-19, according to Johns Hopkins University's data.

The United States has the highest fatality count, having so far recorded 205,131 deaths, according to JHU.

The first coronavirus-related death recorded was in the Chinese city of Wuhan on January 9.

The world recorded half a million deaths more than 24 weeks later, on June 28, and it took just a little over 13 weeks to double the figure.

The university’s tally shows the US, Brazil, India, and Mexico account for more than 50% of the total deaths globally.

CNN is tracking the cases and deaths:

House Speaker Nancy Pelosi and Treasury Secretary Steven Mnuchin, who have cut several major deals during the coronavirus pandemic, are trying one final time to ease a bitter standoff on Capitol Hill over a pre-Election Day package to provide relief to millions of Americans reeling from the damaging economic crisis.

Pelosi and Mnuchin have spoken several times in recent days, including Monday night and plan to again on Tuesday. And while most on Capitol Hill are deeply skeptical a deal can be reached, both Pelosi and Mnuchin have aligned interests: The speaker is facing growing pressure from vulnerable House Democrats, particularly freshman, to cut a deal immediately while President Donald Trump wants a legislative accomplishment to tout in the final weeks of the intensely fought campaign.

But the House speaker has made contingency plans in case the effort falls apart: She and her top lieutenants on Monday night unveiled a $2.2 trillion plan, down from the $3.4 trillion measure that passed the House largely along party lines in May and has since been ignored by the GOP-led Senate.

That price tag for the bill is still far too high for the White House and Senate Republicans, who tried to advance a $500 billion plan this month that was blocked by Democrats over concerns it didn't go far enough. 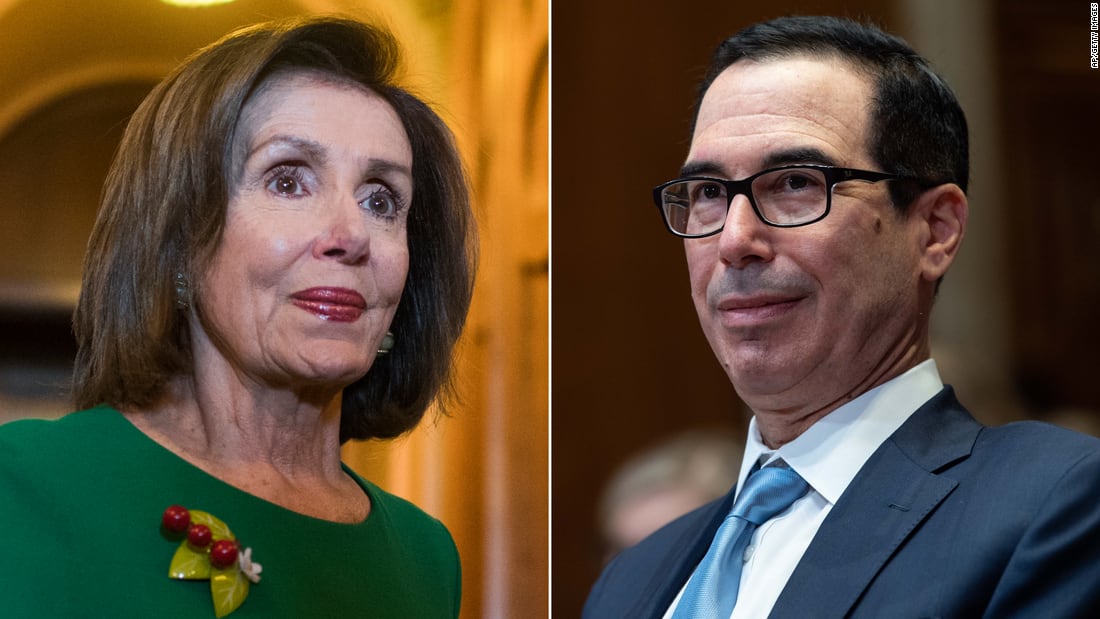 US President Donald Trump formally announced a plan on Monday to disperse the 150 million rapid coronavirus tests first promoted by the White House in August.

The White House originally billed the deal to obtain tests, which are made by Abbott Laboratories, as a potential game-changer to battle the coronavirus pandemic. But without detailed federal guidance on how to distribute the tests, states and cities remained divided, and some of them stifled, on how to best to use those types of rapid tests and others for the testing technique known as "screening" -- which involves routinely testing people whether or not they have symptoms.

Announcing the distribution plan Monday afternoon in the White House Rose Garden, Trump claimed the testing effort would "allow every state on a very regular basis test every teacher who needs it."

"I'm pleased to report we're announcing our plan to distribute 150 million Abbott point of care tests in the coming weeks," Trump said in the Rose Garden on Monday.

Of course, many schools across the country have already been opened for weeks without comprehensive testing access amid the Trump administration's ongoing push to reopen schools and businesses despite the ongoing pandemic.

And the plan marks a pivot by the Trump administration and by the President, who has repeatedly and inaccurately claimed that more coronavirus testing in the US would lead to more coronavirus cases. 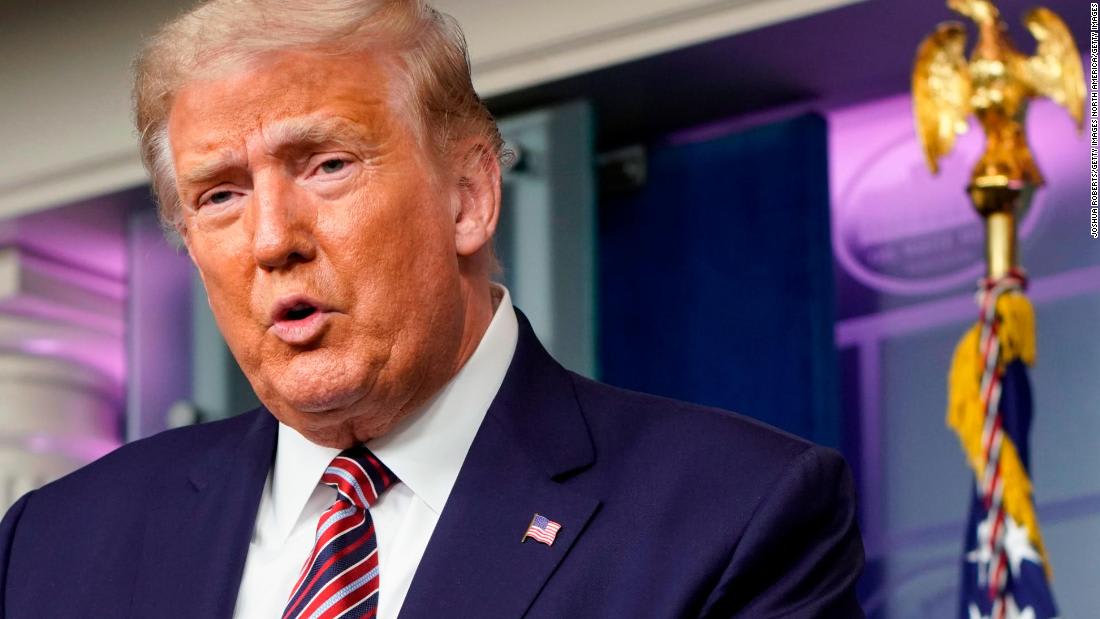