The state reported its highest seven-day percent positive on record Monday at 17%.

Wisconsin also reported 17 additional deaths Wednesday. For context, the state reported its highest death count on May 27 at 22. 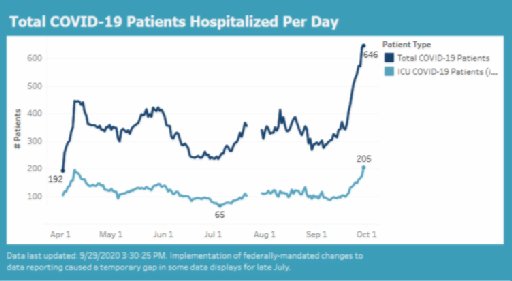 The Bill & Melinda Gates Foundation has signed a new joint agreement, along with 16 pharmaceutical companies, to commit to scaling up manufacturing of Covid-19 vaccines at "an unprecedented speed" and making sure that approved vaccines reach broad global distribution as early as possible.

"The only way to eliminate the threat of this disease somewhere is to eliminate it everywhere,” Microsoft founder Bill Gates said during a World Health organization briefing.

“The solution is not shaming the rich countries that are doing the natural thing of wanting to protect their people. The solution is to vastly increase the manufacturing capacity so we can cover everyone as soon as possible," Gates said.

"The next component we need for global elimination is the funding to pay for those vaccines. The pharmaceutical industry has already made significant commitments in this area as well. The companies involved in the agreement are committed to using donations for going profits, and using tiered pricing to make their products as affordable as possible," Gates added.

Hospitalizations have been increasing every day since Sept. 6, when the state reported 930 people hospitalized.

The National Football League has announced that Sunday's Pittsburgh Steelers-Tennessee Titans game has been postponed.

The league says it will reschedule the game to either Monday or Tuesday so that additional time can be allocated for coronavirus testing.

The Titans have had four players and five staff members test positive for Covid-19.

The NFL said in a statement that details on the new game date and time will be announced as soon as possible.

“There is going to be a very rigorous inspection effort in those zip codes and we are going to be looking carefully to make sure every restaurant is following the rules," he said.

Health department professionals and other staff will be visible in restaurants Wednesday through the evening.

Asked whether he would engage in indoor dining, Mayor de Blasio said, “My outdoor dining experiences have been amazing, I’m going to keep doing that for the foreseeable future and then of course shift to indoor when the outdoor isn’t as prevalent because of the weather.”

New York City Mayor Bill de Blasio said the city is reporting a rate 0.94% positivity in testing of Covid-19 – down from over 3% the day before – as he detailed the “intense efforts” and a “huge amount of focus” on neighborhoods of concern.

In six of the target neighborhoods, the rate of percent positivity is continuing to go up, the mayor said.

The percent positivity’s in those nine key zip codes range from more than 6% to more than 3%.

The city is also monitoring four other zip codes with percent positivity’s under but close to 3%.

House Majority Leader Steny Hoyer, on a private call with the House Democratic caucus on Wednesday, said the House would vote today on the $2.2 trillion stimulus proposal *if* no deal is reached between Speaker Nancy Pelosi and Treasury Secretary Steven Mnuchin this morning, according to two people on the call.

Hoyer’s comments underscore just how crucial the discussion between Pelosi and Mnuchin will be this morning. Should Democrats move forward on a vote, it is all but certain to put an end to bipartisan negotiations until after the election.

What happens next: House Democratic leaders have teed up the bill in case talks fall apart, as has happened repeatedly over the course of the last few months, amid pressure from frontline Democrats who want to show they are taking action to address pandemic-driven economic shortfalls in the weeks before the election.

Pelosi, for her part, made clear on the call that this won’t be the last opportunity for Democrats to consider a broad stimulus deal and noted that the major outstanding issues are funds for state and local governments and liability protections.

Pelosi and Mnuchin are slated to talk before noon today, according to people familiar with their schedules. Mnuchin is planning to present a counter-offer somewhere around the $1.5 trillion range, one of the people said.

Mnuchin, on CNBC this morning, said he and Pelosi are “going to give it one more serious try to get this done. We’re hopeful."

The Titans are scheduled to host the Pittsburgh Steelers this Sunday. When asked about the status of the game, McCarthy relied, “we are taking this day by day.”

Aurelien Rousseau said 34% of ICU beds are occupied by Covid patients in the Paris region, with 30% ICU Covid bed occupancy for the city of Paris.

With worsening numbers, the government may decide that Paris, like Marseille and the overseas department of Guadeloupe, become a zone of “maximum alert,” meaning bars and restaurants close.

The French minister of Health, Olivier Veran is expected to announce an update of measures in a press conference before the end of the week. Many bars and restaurant owners in Paris fear closure and the economic impact.