The US Centers for Disease Control and Prevention has again updated its guidance about how Covid-19 spreads to include information about potential for airborne transmission.

"CDC continues to believe, based on current science, that people are more likely to become infected the longer and closer they are to a person with COVID-19," the agency said in a statement on Monday.
"Today's update acknowledges the existence of some published reports showing limited, uncommon circumstances where people with COVID-19 infected others who were more than 6 feet away or shortly after the COVID-19-positive person left an area. In these instances, transmission occurred in poorly ventilated and enclosed spaces that often involved activities that caused heavier breathing, like singing or exercise. Such environments and activities may contribute to the buildup of virus-carrying particles."

Still, the available data suggest "it is much more common for the virus that causes COVID-19 to spread through close contact with a person who has COVID-19 than through airborne transmission," the new guidance says. 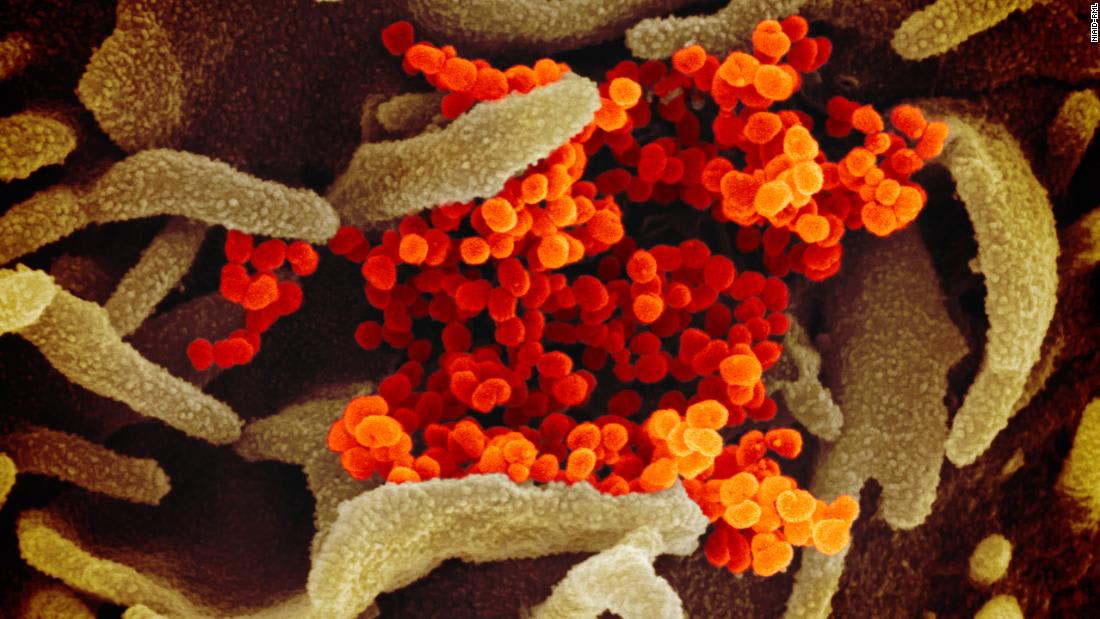 President Donald Trump staged a reckless departure from Walter Reed National Military Medical Center on Monday, telling his followers the virus that dangerously deprived him of oxygen and hospitalized him for 72 hours was nothing to fear before posing for a mask-less photo-op on the White House balcony.

It was a remarkable attempt to convert his still-ongoing disease into a show of strength, even as it underscored his longstanding practice of denying the pandemic's severity and downplaying its risks despite the more than 200,000 Americans dead.

"Don't be afraid of Covid. Don't let it dominate your life," Trump wrote several hours before walking carefully out of the hospital's gold front doors, even as his doctors warned he wasn't yet "out of the woods."

Wearing a white cloth mask and a navy blue suit, Trump gave several thumbs up and a fist bump as he walked down the hospital's front steps toward his waiting helicopter. He would not answer when asked how many of his staffers had tested positive.

After a flight over Washington, Trump landed on the South Lawn and proceeded in an unusual route up a set of stairs the first-floor balcony, where aides had positioned a row of American flags.

Peeling off his mask, Trump posed in salute as his helicopter departed before walking inside.

The building he's returning to has become a center for viral contagion -- in part because of disregard for mitigation measures.

The message was jarring not only because it was irresponsible but that it came from a current coronavirus patient who has experienced serious symptoms of the disease and whose recovery has included experimental treatments unavailable to most Americans. 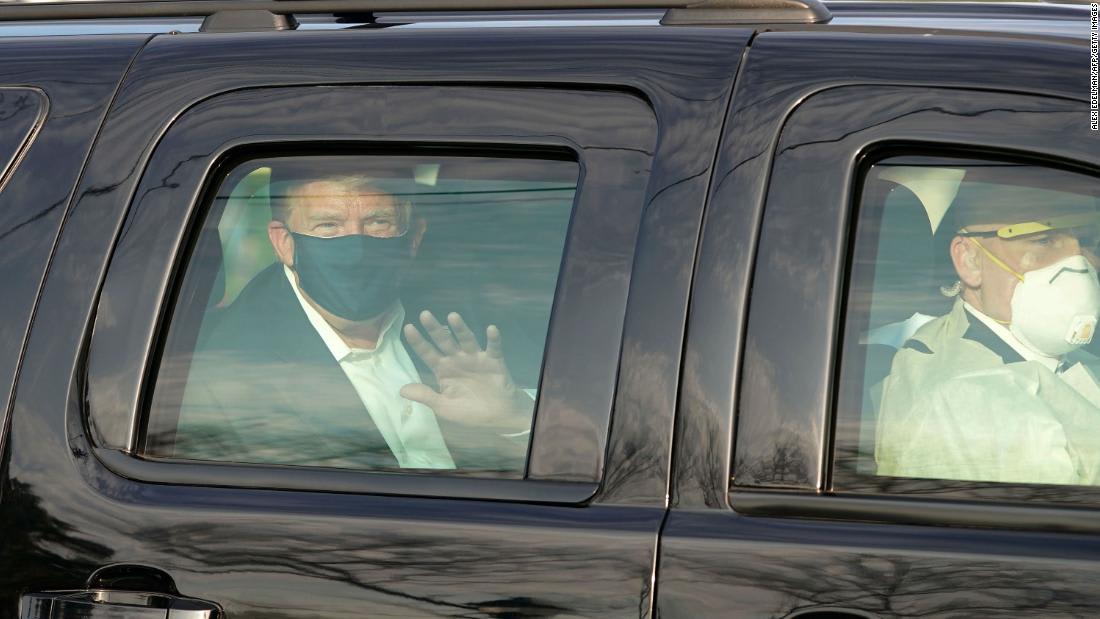 Less than a week after reopening, schools in some New York City neighborhoods will close beginning Tuesday as the city tries to get ahead of a worrisome spread of Covid-19.

Gov. Andrew Cuomo approved part of that plan, agreeing to close schools in those nine hotspot areas and moving their closures up to Tuesday. He declined, though, to close nonessential businesses and religious institutions.

"My number one concern has always been schools," Cuomo said Monday.

The decision to roll back reopenings in those areas highlights the challenge facing cities, states, universities and businesses as they try to balance the need to reopen the economy with ensuring public health and safety during the pandemic.

By any measure, the US has failed this challenge: temporary layoffs have become permanent, the President was in the hospital after a White House outbreak and more than 40,000 Americans are newly diagnosed with Covid-19 every day.

More than 2,000 Transportation Security Administration employees have now tested positive for coronavirus, according to new data the agency published on its website Monday.

The TSA says of the 2,020 employees who have been infected with Covid-19, nearly 1,800 have fully recovered. Seven TSA employees have died as a result of the virus.

The agency has installed new acrylic barriers at security checkpoints, has changed passenger protocols in an effort to reduce touch points, and is experimenting with new facial recognition scanners to cut down on face-to-face interaction between fliers and workers.

The news comes after a weekend bump in pandemic air travel. TSA says it screened a total of 900,911 travelers at airports across the United States on Sunday, the third time air travel levels reached more than 900,000 since the pandemic low point of 87,000 on April 14. On average, air travel remains at a third of last year’s levels.

It varies from region to region, Ryan said at a WHO Executive Board meeting.

"Our current best estimates tell us that about 10% of the global population may have been infected by this virus," Ryan said.

"This varies depending on country, it varies from urban to rural, it varies between different groups. But what it does mean is that the vast majority of the world remains at risk," Ryan added.

According to Johns Hopkins University, more than 35.3 million people have been diagnosed with coronavirus globally, but WHO and other experts say that is almost certainly an enormous undercount. The US Centers for Disease Control and Prevention says cases in the US are also undercounted by at least 90%.

With a global population of about 7.7 billion people, Ryan’s estimate would mean about 770 million have been infected -- but most have not been diagnosed or counted.

The UK government has launched an investigation into a technical issue which resulted in almost 16,000 cases of coronavirus to go unreported, a Downing Street spokesperson has confirmed.

The Downing Street spokesperson said the investigation will “determine why the issue was not identified sooner."

A spokesperson for Prime Minister Boris Johnson said the issued occurred in the “process that transfers positive test results into the reporting dashboards” and that additional contact tracers had been employed to deal with the backlog.

The error was first announced in a statement from Public Health England (PHE) on Sunday. According to the statement, “a technical issue was identified overnight on Friday 2 October in the data load process that transfers COVID-19 positive lab results into reporting dashboards."

The statement went on to say that PHE consequently “identified that 15,841 cases between 25 September and 2 October were not included in the reported daily COVID-19 cases.” PHE alongside NHS Test and Trace then “worked to quickly resolve the issue and transferred all outstanding cases immediately into the NHS Test and Trace contact tracing system.”

Johnson said in a televised interview Monday that “some of the data got truncated” and “was lost.” Johnson said the revised case numbers “really correspond to pretty much where we thought we were,” adding that “the slightly lower numbers that we'd seen didn't really reflect where we thought the disease was likely to go.”
Calling the new case numbers “realistic,” Johnson expressed his hope that “the extra enforcement of the rule of six, the extra enforcement of self-isolation” will play a part in “driving down the virus” in the coming weeks.