The US Food and Drug Administration made clear Tuesday it will want to see two months of follow-up data after volunteers get their second dose of a vaccine as part of clinical trials testing potential coronavirus vaccines.

That would make it difficult, if not impossible, for any vaccine maker to apply for emergency use authorization by Election Day, as President Trump has tried to promise, or by the end of October, as the CEO of Pfizer has hinted.

The agency posted documents for an Oct. 22 meeting that has long been scheduled for vaccine advisers to meet and discuss requirements for either emergency use authorization or a full biologics license application for any potential coronavirus vaccine.

The document also outlines other advice for companies seeking FDA consideration for emergency use. It is the first detailed document describing what should be included in applications in order to issue an emergency use authorization for a vaccine.

The agency said it wants to make sure any vaccine is safe before giving authorization to deliver it to millions of people.

That would include “data from Phase 3 studies that includes a median follow-up duration of at least two months after completion of the full vaccination regimen to help provide adequate information to assess a vaccine’s benefit-risk profile, including: adverse events; cases of severe COVID-19 disease among study subjects; and cases of COVID-19 occurring during the timeframe when adaptive (rather than innate) and memory immune responses to the vaccine would be responsible for a protective effect,” it reads.

"In general, FDA’s guidance documents, including this guidance, do not establish legally enforceable responsibilities. Instead, guidances describe the Agency’s current thinking on a topic and should be viewed only as recommendations, unless specific regulatory or statutory requirements are cited. The use of the word should in Agency guidance means that something is suggested or recommended, but not required," the documents read.

FDA officials have been clear in saying they want to have conversations with vaccine makers, rather than laying down strict rules that must be followed, for providing emergency use authorization for any vaccine.

New York City Mayor Bill de Blasio added another zip code to the city’s “watchlist,” which is a compilation of zip codes that are on the radar but have not met the criteria of being above 3% positivity for 7 days.

Tier 2 has an added zip code, 11206, bringing the “watchlist” total to 13. This list of zip codes would not face the same restrictions as the nine that have been a priority for the city to address.

Earlier this week, the mayor called for indoor dining, gyms, and pools to be halted in these areas, as part of his proposal to the state.

De Blasio called this time a “crucial” moment in the city’s effort to contain Covid-19 in hot spot communities.

“We have to get ahead of this,” he said.

“We have to be tough about it” he said adding the “tough restrictions” are nothing the city wants, but effectively what it needs.

New York City Mayor Bill de Blasio said that no decision has been made on his proposal to close non-essential businesses and revert restaurants to takeout only in the 9 hot spot zip codes by Wednesday.

Conversations continue he said, adding “we need obviously a clear decision in the course of today so we can move forward.”

It is the state’s ultimate decision, he noted, but he is “prepared to implement as soon as tomorrow morning in those 9 zip codes once we have the signoff from the state.”

The closures would not affect religious institutions per his proposal.

The 4 states are: Hawaii, Kansas, Missouri and South Carolina. 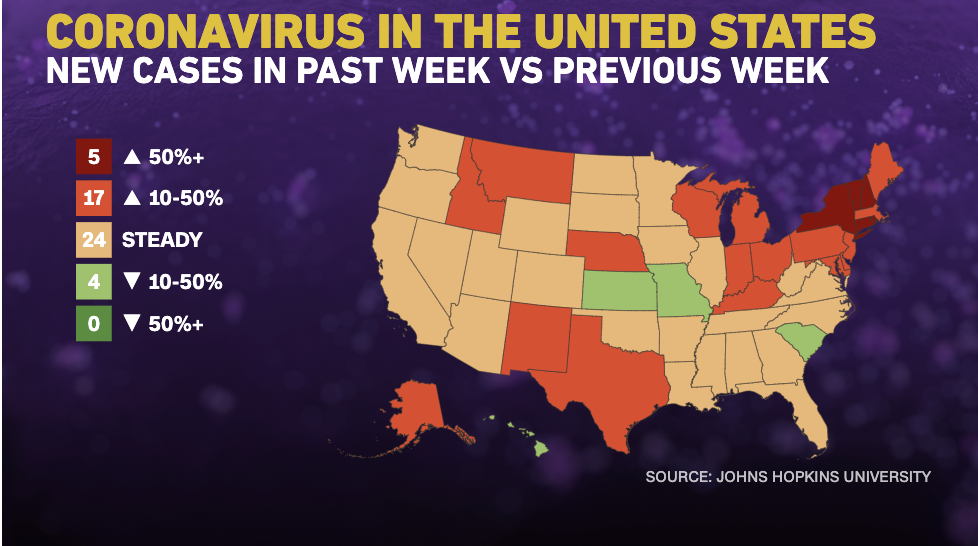 As the coronavirus pandemic continues, families like Rose Rodriguez’s struggle to keep food on the table.

Rodriguez said she used to work at the Qantas Airlines cargo department at Los Angeles International airport. She told CNN’s Kyung Lah that since losing her job, she has applied for 50 jobs, has had 30 interviews, her unemployment has stalled, her car and furniture were repossessed, and she is months behind on rent.

“When we go to the laundromat, we see homeless washing themselves. And one day, if I don't go back to work, I’m going to be one of them,” she said.

She gets a weekly box of food from the Salvation Army and the Los Angeles Food Bank that she needs to stretch out seven days for her and her three daughters.

She said her children shouldn’t have to worry about eating.

“I should be working and they should be just worried about school and their futures. It just hurts,” Rodriguez said.

The Salvation Army said that on the days when they can give out fresh produce, the line wraps around the block, Lah reports.

“Even though we're trying our best to help, we know that we're barely scratching the surface because we can only do so much with the limited resources that we have,” the Salvation Army Siemon Center’s Mortimer Jones said.

Five former CDC directors will join Anderson Cooper and Dr. Sanjay Gupta for a special coronavirus town hall event this weekend. Leave your questions for them below.

At least 20 Titans — ten players and ten staff members — have previously tested positive for the virus.

Last Tuesday, the NFL closed the Titans' facility due to the outbreak. McCarthy said Wednesday is the earliest day the team could possibly reopen the facility.

The Titans are scheduled to play the Buffalo Bills in Nashville this Sunday.

Pennsylvania is adding a testing clinic Thursday at a mall in Indiana County to contain what health officials say is the “recent rapid increase in Covid-19 cases,” it said in a release.

The health department is also extending the testing site in Centre County through Saturday, officials said, adding that this county still has the highest percent-positivity 9.4%

“Since the beginning of September, we have seen an increase of 324 cases in Indiana County, which gives us significant cause for concern,” Secretary of Health Dr. Rachel Levine said. “These testing sites will be open to anyone who feels they need a test. It is important that even people with no symptoms who test positive isolate and quarantine to stop the spread of COVID-19.”

The White House has declined offers from the US Centers for Disease Control and Prevention to help investigate the outbreak surrounding President Trump’s Covid-19 diagnosis, according to a federal health official.

The offer by the CDC to engage with efforts like contact tracing occurred almost immediately after the President revealed he had contracted the virus. Despite the concerns expressed by those at the CDC, including Director Robert Redfield, officials at the White House turned down the CDC’s offer to help, the official said.

The offer was repeated in a phone call on Monday, according to the source.

Questions over contact tracing: The White House has shown little indication it is conducting a comprehensive effort to properly trace contacts from those exposed at events like the Supreme Court nomination ceremony two weekends ago. Almost no masks were worn at the event, and there was no social distancing both at the outdoor event and at the indoor reception.

Some attendees said they have had no outreach, and others have said even when notified they were not asked the slate of questions typically used to document who else may have been exposed through contact.

“The White House has plans and procedures in place that incorporate current CDC guidelines and best practices for limiting Covid-19 exposure and has established a robust contact tracing program led by the White House Medical Unit with CDC integration,” Deere said in a statement.

A White House official says a CDC epidemiologist has been detailed to the White House since March and is assisting.

No "substantial contact" with White House, despite "multiple attempts": The DC government says it has gotten no response from the White House despite multiple efforts by political and health officials to get information. Mayor Muriel Bowser said Monday there had been no “substantial contact.”

Bowser's spokeswoman Susana Castillo says there have been “multiple attempts” since Friday to contact the White House at both the political and public health levels.

This past weekend, White House press secretary Kayleigh McEnany said the White House would not be providing public information about how many staffers become sick, citing privacy concerns. McEnany herself publicly announced yesterday she was infected. Two of her aides have also tested positive.

When asked for comment, the CDC referred all question to the White House.