US Health and Human Services Secretary Alex Azar projects that the United States will have enough vaccines for “every American” who wants one by March or April of 2021.

Speaking during a Goldman Sachs Healthcare virtual event on Thursday, Azar gave an update on the timeline for vaccines in the US.

“The good news is that we're doing everything we can to ensure that we have supplies manufactured,” he said. “Pending FDA authorizations, we believe we may have up to 100 million doses by the end of the year, enough to cover especially vulnerable populations. And we project having enough for every American who wants a vaccine by March to April 2021.”

Operation Warp Speed is a “complex endeavor, and especially so during a global pandemic,” Azar said.

“Industrial scale manufacturing of a product while it's still in clinical trials is rare in drug development,” he said, adding that it makes little business sense to spend money on a product that may never get used. “Something that should make any Goldman analysts recoil in horror.”

“Manufacturing has now begun on an industrial scale for all six OWS supported vaccines. More than 23 manufacturing facilities across the US had been augmented and scaled up with our support,” he said.

“We're also supporting the procurement and manufacturing of the ancillary supplies needed for vaccines, such as vials and syringes, with more than a billion currently under procurement," Azar added.

US stocks rose at the opening bell in New York on Thursday, as stimulus hopes continue to dominate the market.

Meanwhile, the Labor Department’s report on jobless claims showed a slight improvement in first-time claims, but a significant one million drop in continued jobless claims.

Coronavirus cases in England have increased by 56% in a week, according the latest figures from the UK government’s NHS Test and Trace.

At least 51,475 people tested positive for Covid-19 during the week of Sept. 24 through Sept. 30 –– a 56% increase from the previous week. According to the weekly Test and Trace roundup, positive figures have been “rising steeply over the past 5 weeks with over 7 times as many positive cases identified in the most recent week compared to the end of August.”

There has been an increase of 27% in the number of people tested since the end of August.

A total of at least 7,654,018 people have now been tested for coronavirus at least once in England since Test and Trace began on May 28.

The pace of America's jobs recovery continues to slow.

Another 840,000 workers filed for initial unemployment benefits last week on a seasonally adjusted basis, the Department of Labor reported Thursday.

California has halted the processing of its initial claims for a second-straight week to work on its benefit backlog and fraud prevention. Thursday's report includes an estimate based on previous claims for the state.

Claims for Pandemic Unemployment Assistance stood at 464,437. PUA is targeted as those workers who aren't eligible for regular benefits, such as the self-employed.

Together, regular and PUA first-time claims stood at 1.3 million last week, on an unadjusted basis.

Continued claims, which count people who have filed for benefits for at least two weeks in a row, stood at 11 million, down almost 1 million.

Canadian public health officials are warning residents to stay home as much as possible, saying the next few weeks will be critical to the country's efforts to contain Covid-19.

Last month, Prime Minister Justin Trudeau declared that a second wave of the coronavirus was already underway in most of the country.

The national daily case counts continue to increase sharply, with an average of about 2,000 new cases every day for the past week. That's a 40% rise in the last week alone, according to government statistics.

Since the Covid-19 outbreak started, Canada has had a total of 175,380 cases and 9,593 deaths, according to Johns Hopkins University.

Hospitalizations and deaths continue to creep upward as well, with more than 600 patients currently in hospitals in Canada with Covid-19 and an average of about 18 deaths reported daily.

More than 80% of new infections are from Ontario and Quebec, and those under 40 account for 60% of the cases.

The province of Quebec is of particular concern, with urban hotspots in Montreal and Quebec City. Dine-in restaurants and bars were closed in those cities last week as new daily cases continue to climb.

Quebec reported 1,364 new cases of the virus on Tuesday alone, the highest daily case total since the pandemic began. That prompted a blunt warning to young people in Quebec to take the virus seriously and stay home.

"The young people that are not respecting the rule, they will have an impact on the system," Christian Dube, Quebec's health minister, said during a press conference in Quebec City on Tuesday. "Don't take the risk, please don't test the hospital system."

The oil and gas industry is laying off workers at an unprecedented pace to cope with a pandemic that crashed energy prices and raised doubts about the future of fossil fuels.

A staggering 107,000 jobs vanished from the US oil, gas and chemicals industry between March and August 2020, according to an analysis published this week by Deloitte. That's the fastest rate of layoffs in the industry's history -- and it doesn't even include the untold number of people on furlough or taking pay cuts.

The vast majority of those energy jobs are unlikely to return anytime soon.

Even if US oil prices stay at $45 a barrel until the end of 2021, 70% of the jobs lost during the pandemic in the oil, gas and chemicals industry may not come back by the end of next year, the Deloitte analysis found.

"Such large-scale layoffs are challenging the industry's reputation as a reliable employer," the Deloitte report said.

Part of the problem is that the fortunes of the notoriously boom-to-bust oil and gas industry have become even more closely tied to commodity prices than in the past.

A $1 change, up or down, in US oil prices can potentially impact 3,000 upstream and oilfield services jobs, compared with 1,500 jobs in the 1990s, Deloitte found. In other words, the link between jobs and prices is twice as powerful as it was then. 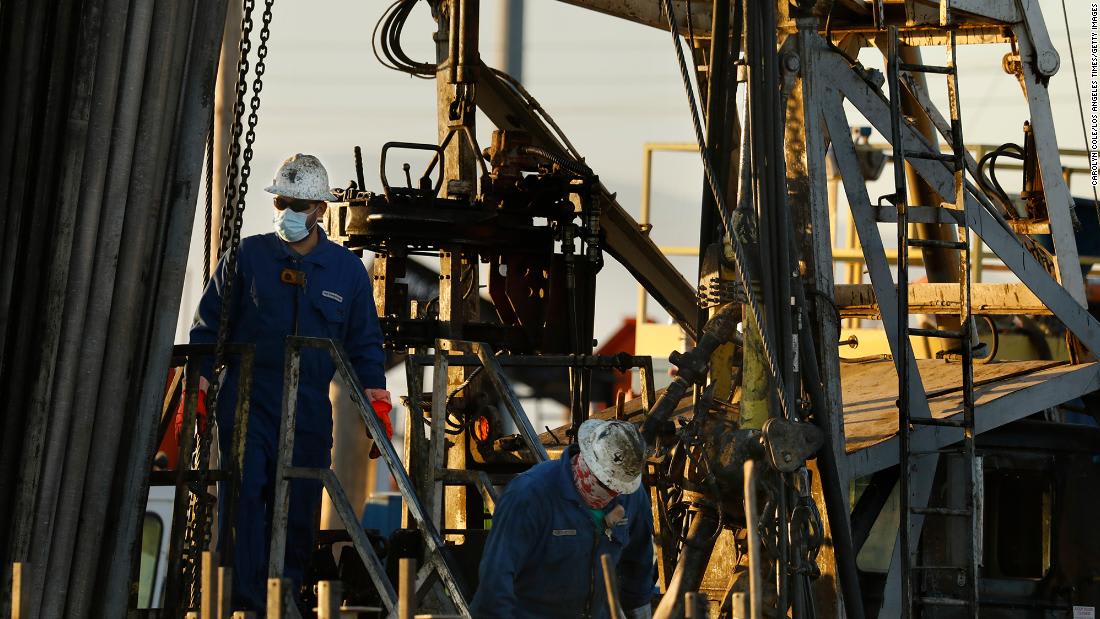 The pandemic killed 107,000 oil and gas jobs. Most aren't coming back anytime soon

British Airways retired the last of its huge Boeing 747 airplanes on Thursday when the final two planes still in service departed from London Heathrow -- a poignant event hastened by the coronavirus pandemic.

BA said that the jumbo jets, one dressed in "Negus" design and the other bearing Chatham Dockyard livery, took to the skies "one after the other" from Heathrow's 27R runway.

One of the airplanes, G-CIVY, circled back over the runway before flying to St. Athan, Wales, to be retired, while the other, G-CIVB, will be kept at Kemble, England.

In July, the British airline announced that it was grounding its fleet of 747s following the damaging impact that the Covid-19 pandemic has had on both the airline and aviation sector.

Known as "Queen of the Skies" and popular among aviation fanatics, the Boeing airplane has fallen out of favor in recent years as airlines switch to more efficient, smaller passenger jets.

BA said it was already "slowly" phasing out the "fuel-hungry" aircraft in order to help meet a commitment to "net zero by 2050."

But earlier this year, the company released a statement to say that the planes had likely flown their last scheduled commercial service -- despite recently refreshing the interiors of the planes having expected them to remain in service for several years. 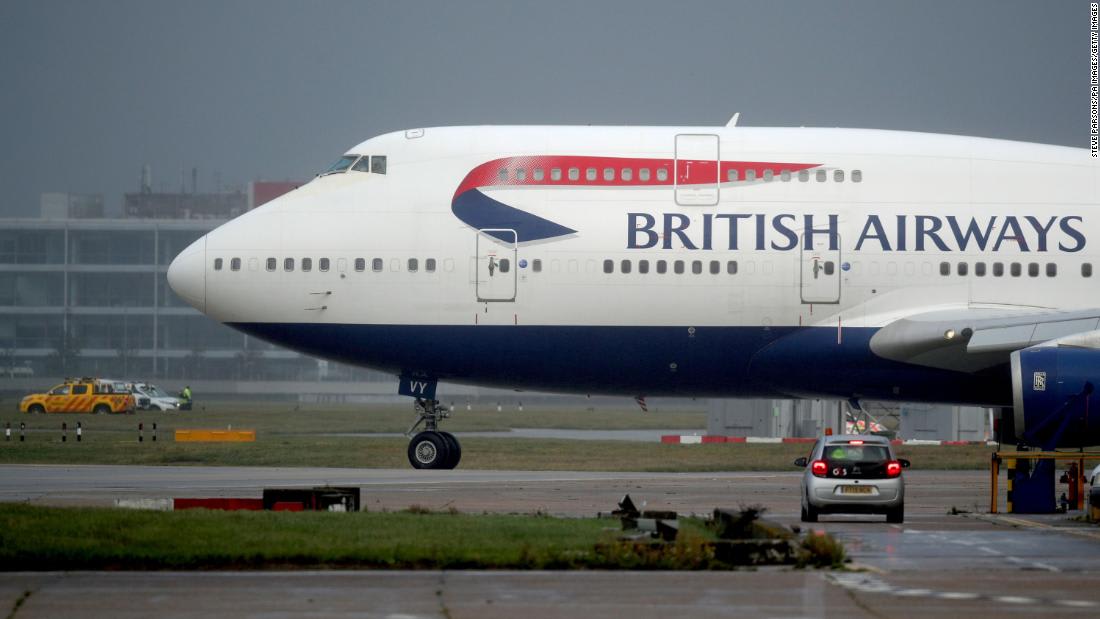 Coronavirus killed three times more people in England and Wales than pneumonia and influenza combined in the first eight months of this year, according to new data from the Office for National Statistics (ONS).

“More than three times as many deaths were recorded between January and August this year where COVID-19 was the underlying cause compared to influenza and pneumonia," said Sarah Caul, head of mortality analysis at the ONS.

“The mortality rate for COVID-19 is also significantly higher than influenza and pneumonia rates for both 2020 and the five-year average."

“Since 1959, which is when ONS monthly death records began, the number of deaths due to influenza and pneumonia in the first eight months of every year have been lower than the number of Covid-19 deaths seen, so far, in 2020,” said Caul.

The figures also reveal the toll that coronavirus has taken on care home residents, with the proportion of deaths due to Covid-19 almost double that due to influenza and pneumonia, according to the ONS figures.

The agency's analysis of Covid-19, influenza and pneumonia deaths focuses on deaths where people died due to these conditions, rather than deaths where the conditions were either the underlying cause or mentioned as a contributing factor.

The central European country has now overtaken Spain as the EU nation with the highest number of coronavirus cases per 100,000 people.

There has now been a total of 95,360 cases, and 829 coronavirus deaths in the Czech Republic, according to John Hopkins University.