Our live coverage of the coronavirus pandemic has moved to here.

The Broadway League announced on Friday that all ticket sales for Broadway performances in New York City will be suspended through May 30, 2021.

All 41 Broadway theaters have been closed since March 12 due to the coronavirus pandemic. The Broadway League, which is the national traded association for the Broadway Industry, has repeatedly extended the suspension of shows. Most recently, the league said shows would not be returning to the stage until at least January of 2021.

“With nearly 97,000 workers who rely on Broadway for their livelihood and an annual economic impact of $14.8 billion to the city, our membership is committed to re-opening as soon as conditions permit us to do so. We are working tirelessly with multiple partners on sustaining the industry once we raise our curtains” said Charlotte St. Martin, President of the Broadway League.

The Broadway League says theatergoers holding tickets for dates through May 30, 2021 should contact their point of purchase for details about exchanges and refunds.

Spanish Health Minister, Salvador Illa, announced at a news conference on Friday that the government is declaring a state of emergency in the Madrid region for 15 days.

This decision follows a court ruling overturning a government order a week ago that introduced new coronavirus restrictions in the capital.

The state of emergency will ensure that those measures stay in place, “the situation is the same as it was yesterday, only the legal form is different,” Illa said.

Here are some of the measures that will apply to nine municipalities of the Madrid region and include mobility and commercial restrictions:

The state of emergency declaration came at the start of a bank holiday weekend when normally more than a million Madrid residents would leave the area, but Illa said authorities don't want them potentially spreading the virus elsewhere in Spain.

Spanish Interior Minister, Fernando Grande-Marlaska, announced the “deployment of national police and civil guards to guarantee that the announced measures are complied with , more than 7,000 police officers and civil guards will be deployed immediately and check points will be put in place in the affected municipalities."

They can issue fines for non-compliance, he added.

The state of alarm cancels the measures announced by Madrid’s regional government earlier today. Regional health chief Enrique Ruiz Escudero, said at a news conference Friday morning that the region would continue with the Basic Health Zones, isolating only the areas and neighborhoods with 750 cases per 100,000 people in a 14-day -period.

Illa accused the Madrid regional government of “not doing anything”. He explained that the transmission levels in Madrid are “very high” and that hospitals are “at the risk of being overwhelmed”. “Patience has a limit, there is no one more blind than the one who does not want to see. It is important that the level of contagion in Madrid does not spread to the rest of the country”, he added.

The United States on Thursday reported the most cases it has seen in a single day in nearly two months — more than 56,000 new cases were added yesterday, according to Johns Hopkins University.

Meanwhile, only 2 states are showing a downward trend in new cases compared to the previous week — Hawaii and Alabama.

At least 28 states are showing upward trends and 20 states are holding steady.

Here's a look at where new cases are rising across the country: 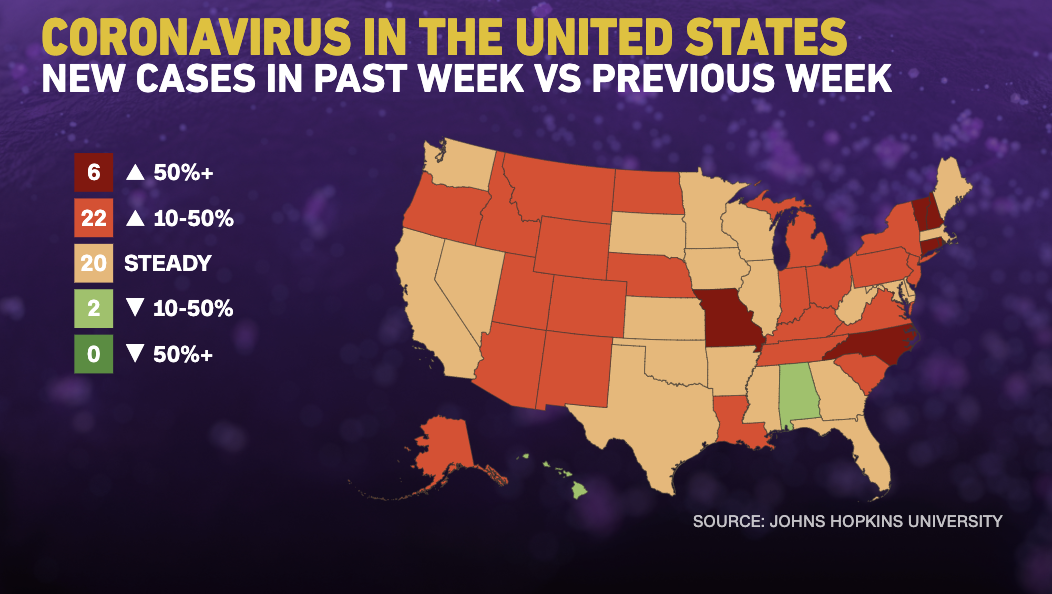 A National Football League source confirms to CNN that there were no new positive Covid-19 tests Thursday among the New England Patriots, Tennessee Titans or Kansas City Chiefs. Those teams have had their schedules altered by recent coronavirus infections.

Despite the news, a Patriots spokesperson says the team will continue to work remotely Friday, as a precaution.

The Pats, whose scheduled game against the Chiefs last Sunday was moved to Monday, haven’t practiced on the field all week. This upcoming Sunday’s game between the Patriots and Denver Broncos has been moved to Monday by the NFL.

If the Titans continue to test negative for the next three days, their scheduled Sunday game with the Buffalo Bills will be moved to Oct. 13. Then, if that game does go ahead Tuesday, the Bills game vs. the Chiefs will shift from Oct. 15 to next weekend.

The novel coronavirus has infected more than 36.5 million people worldwide and killed at least 1,062,624. Here's what you need to know:

Trump's Covid-19 diagnosis: The US President has been cleared by his doctor to resume public engagements, but there are still unanswered questions about his health.

Promising therapeutic: Monoclonal antibody treatments like the one Trump got may be the most effective approach for treating coronavirus infections, Microsoft founder Bill Gates said Thursday. Those treatments were developed using cells derived from aborted fetuses, a scientific method that the Trump administration has tried to block.

Global vaccine effort: China has signed onto the WHO's COVAX initiative, which aims to provide worldwide access to effective Covid-19 vaccines. Meanwhile, Trump's promises of a vaccine by Election Day have been called "reckless" by an ousted vaccine director.

This year's Nobel Peace Prize has been awarded to the World Food Programme (WFP) for its "efforts to combat hunger," as the global population grapples with a pandemic-induced food crisis.

"The coronavirus pandemic has contributed to a strong upsurge in the number of victims of hunger in the world," said Reiss-Andersen. "In the face of the pandemic, the World Food Programme has demonstrated an impressive ability to intensify its efforts."

"As the organization itself has stated: until the day we have a vaccine, food is the best vaccine against chaos," she added.

The United Nations Food and Agriculture Organization (FAO) estimates about 821 million people were suffering from chronic undernourishment before the pandemic. Globally, hunger crises have been fueled by climate change, existing conflicts, and inequalities. But now, coupled with Covid-19, the situation has dramatically worsened.

According to an Oxfam report, the hunger crisis linked to the coronavirus could soon kill more people each day than the infection itself.

The WFP, a United Nations entity, was created in 1961 and today provides food to over 90 million people a year.

The organization tweeted its "deepest thanks" after for the honor, adding: "This is a powerful reminder to the world that peace and #ZeroHunger go hand-in-hand."

The world recorded its highest number of daily Covid-19 cases since the pandemic began on Thursday, according to the World Health Organization, and a second wave of the virus in Europe is fueling the surge.

As a region, Europe is now reporting more daily infections than the United States, Brazil, and India -- the countries that have been driving the global case count for months.

The continent recorded 97,800 new cases on Thursday, according to WHO.

Widening outbreaks in European countries such as France, Austria, Romania and the Czech Republic are contributing to the spike.

The UK economy only expanded by 2.1% in the month of August -- less than a third of the growth seen in the previous month -- in spite of the government's "Eat Out to Help Out" initiative boosting consumer spending.

The initiative, which saw the government cover 50% of a customer's bill up to £10 ($12.9), fueled a rise in spending, with the food and beverage services industry growing 69.7% in August, according to data from the Office of National Statistics.

But even with the boon to restaurants, pubs and cafes, economic growth for August fell short of expectations.

While the UK economy did experience growth for the fourth consecutive month, its GDP is still 9.2% below the levels seen in February 2020, before lockdown restrictions began.

UK economic output shrank by 20.4% in the second quarter of 2020, the worst quarterly slump on record, pushing the country into the deepest recession of any major global economy.

This crash in GDP in the April-June period, compared with the first quarter, is the worst since quarterly records began in 1955. Industries most exposed to government lockdown measures to contain the coronavirus pandemic — services, production and construction — saw record drops.

A Madrid court has rejected new lockdown laws imposed on the capital by the Spanish government, leaving millions of residents wondering whether they are clear to travel for a national holiday this weekend.

The court said that the restrictions, which banned residents from leaving the capital and nine suburbs last Friday, interfered with "citizens' fundamental rights without the legal mandate."

Spain's left-wing national government and Madrid's centre-right regional administration have been at loggerheads over pandemic response, and the lockdown measures are the latest political battleground.

Madrid had already introduced less stringent restrictions in and around the capital to try to contain a surging outbreak of the virus. But Spain's health minister Salvador Illa called those measures "insufficient."

In its ruling, the court's sided with Isabel Diaz Ayuso, Madrid's regional government president, who said the lockdown measures introduced by the health ministry would "ravage the region’s economy."

Following the cancelation of the government's order, Madrid's nearly 5 million residents now find themselves free of restrictions ahead of a bank holiday weekend. But many are confused about whether they are allowed to leave the capital for coastal towns and second homes.

Spanish Prime Minister Pedro Sanchez called for a cabinet meeting on Friday to discuss the possibility of a state of emergency for Madrid, a spokeswoman for the government told CNN. Sanchez gave Díaz Ayuso an ultimatum on Thursday to agree to some of the measures imposed by the government.