Our live coverage of the coronavirus pandemic has moved to here.

US President Donald Trump has credited doctors and scientists for doing an "incredible" job against the coronavirus in a short period of time.

“I have such great respect for the doctors and lab scientists, the people that work on this,” Trump said in an interview that aired on Fox News Friday night. “They're doing incredibly well.”

Trump has often disregarded the guidance of his own scientists and federal public health agencies as the pandemic ravaged parts of the US.

Dr. Anthony Fauci, director of the National Institute of Allergy and Infectious Diseases and a member of Trump’s coronavirus task force, said Friday that a Rose Garden ceremony at the White House two weeks ago was a “superspreader” event.

Trump admitted during the Fox interview he may have caught the virus at a White House event, but he doesn’t know for sure.

Trump was diagnosed with Covid-19 last week and seemed to make a speedy recovery after a round of treatments, including an experimental monoclonal antibody therapy, the antiviral medication remdesivir, and the steroid dexamethasone.

The global push to develop a coronavirus vaccine is gathering pace, but much to the likely frustration of US President Donald Trump, caution exercised by American drug makers and regulators has put China out in front ... for now.

Moderna, a leading coronavirus vaccine maker, said this month it will not be ready to apply for emergency use authorization until at least November 25. Meanwhile, the US-based trial sites of another frontrunner, AstraZeneca, have placed testing on hold after a participant in Britain developed a serious illness last month, further undermining Trump's hopes that a vaccine would be ready in time for Election Day on November 3.

The stringent US safety protocols have shifted the so-called vaccine race in China's favor, where -- for better or worse -- political will holds a much larger sway over state, commercial and individual actions, potentially bending rules or norms as needed.

China's leader Xi Jinping has repeatedly urged the country's scientists to accelerate the research and development of coronavirus vaccines. Chinese drug makers have also been told to treat their work as an "important political task" -- and they are doing everything they can to follow that directive.

While the successful development of a vaccine would not preclude other countries from continuing to pursue their own research, China has placed special emphasis on being first. 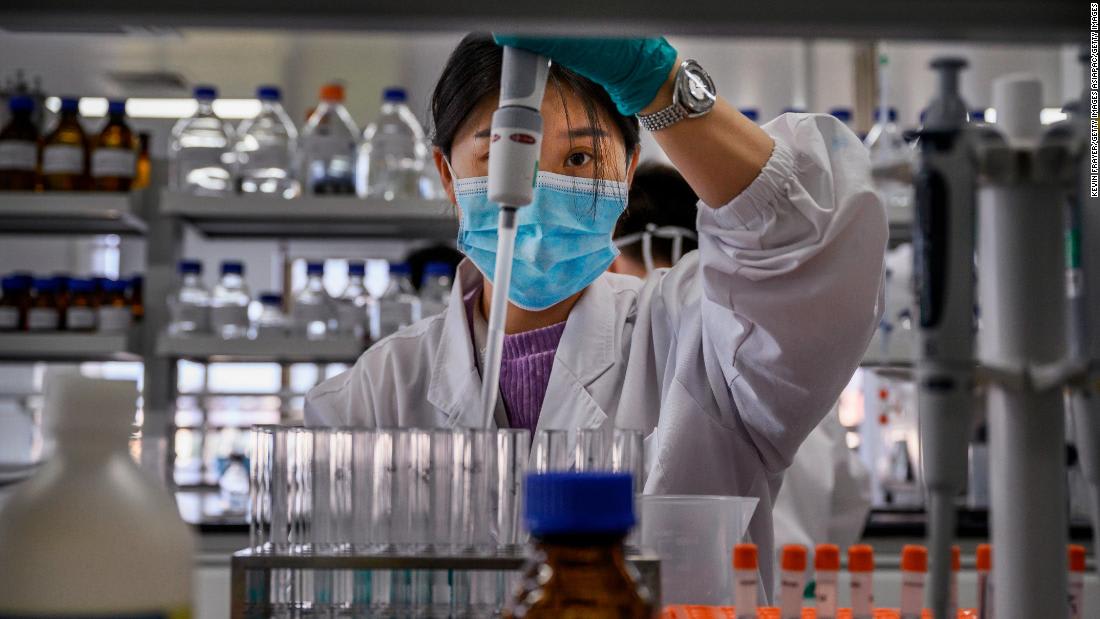 China doubles down in push for coronavirus vaccine

A new report from the Council on Foreign Relations says that while pandemic threats are inevitable, the US and global response failures that contributed to the spread of coronavirus are not.

The report, released this week, was compiled by a 22-member task force led by Sylvia M. Burwell, the US Health and Human Services secretary during the Obama administration, and Frances Fragos Townsend, who led the US Homeland Security Council during the Bush administration.

It says the US and other governments failed to adequately invest in prevention, detection and response capabilities to protect populations. There was an “illusion — but not the reality — of preparedness,” the report says, and while the World Health Organization had the expertise to lead a global response, “it is beleaguered, overstretched, and underfunded.”

The US response, the report says, was “deeply flawed” and too slow. Health systems were underfunded, and leaders — including President Donald Trump — failed to communicate clearly or defend public health leaders.

"The United States testifies to the consequences of a failure in political leadership," Richard Haass, president of the Council on Foreign Relations, wrote in the report.

The task force recommended improvements in US and global pandemic responses by encouraging officials to:

The US Food and Drug Administration (FDA) has issued warning letters to two herbal medicine companies telling them to stop trying to sell products which they allege are effective against the coronavirus.

Colorado-based Prairie Dawn Herbs was warned after the FDA investigated its website and social media sites and learned the company was selling products it claimed could protect the immune system and combat symptoms of Covid-19, the FDA said in a news release Friday.

“Based on our review, this product is an unapproved new drug under section 505 of the Federal Food, Drug, and Cosmetic Act,” the agency wrote in a warning letter it sent the company Wednesday. “Furthermore, this product is a misbranded drug."

The FDA cited a monthly newsletter posted to the company’s website offering 20% off several herbal products (Chest Tea, Echinacea Tincture, Mentholated Salve, Eucalyptus Oil, Thieves Oil and Echinacea Glycerite) for the duration of the outbreak “due to the continued threat of COVID-19.”

There are no FDA-approved products to prevent or treat coronavirus. One antiviral drug, remdesivir, has emergency use authorization for treatment but must be used in a hospital under physician supervision.

The FDA says that until the companies took corrective action, they would be on a list of firms and websites that have received warning letters from the FDA “concerning the sale or distribution of COVID-19 related products.”

As of Friday afternoon, the COVID-19 Special was still available for purchase on the Prairie Dawn Herbs website. There was no mention of Covid-19 treatments on the Griffo Botanicals website.

Florida will be “like a house on fire” in another few weeks because the state has dropped coronavirus precautions, and President Trump probably should not hold a rally there right now, infectious disease specialist Mike Osterholm said Friday.

“Florida is ripe for another large outbreak,” Osterholm, the director of the Center for Infectious Disease Research and Policy at the University of Minnesota, told CNN’s Jake Tapper Friday. “What they've done is opened up everything as if nothing had ever happened there and you and I could be talking probably in eight to 10 weeks, and I will likely bet that Florida will be a house on fire. “

Trump, who has been battling Covid-19 for the past week, is heading to Florida Monday for a campaign rally.

Osterholm said it’s probably not a good idea to hold a rally in the state right now, even if it’s held outside. The state has reported 2,900 new infections in the past day, according to Johns Hopkins University.

“The challenge we have is helping the American people understand if you bring people together, even when they're outdoors, it's less risk of transmission being close together outdoors, but it's surely not zero," he said.

Trump is also planning an outdoor gathering at the White House Saturday and said he’ll address the crowd from a balcony.

Osterholm said attending that event isn’t a good idea either.

“I wouldn't go right now because I think the White House itself has a fair number of infections.”

Trump was just released from the hospital Monday and other administration staffers are still battling the virus.

UK Prime Minister Boris Johnson will announce new coronavirus restrictions on Monday as the government tries to curb a surge in new cases.

A Downing Street spokesperson said the details will be outlined in a statement to the House of Commons.

The UK recorded 13,864 new cases on Friday, which is lower than the previous 24 hours. But there has been a sharp upward trend in recent weeks.

Large parts of the UK are already under local lockdowns.

After observing trends in how coronavirus spread throughout the country, White House coronavirus task force member Dr. Deborah Birx said Friday that people in the Northeast need to take preventive measures, too.

“We're seeing those early suggestions here in the Northeast and what we wanted to make clear is the actions this time have to happen at the personal level, in our private homes, rather than just the public spaces,” Birx said during a briefing in Cambridge, Massachusetts.

Birx said people need to heed lessons from the summer outbreaks in the South, where seemingly harmless gatherings contributed to spread of the virus.

“People let down their guard when they were with friends and family, and they took off their masks, and they share dinner, or they share drinks inside, and those become spreading events,” she said.

Birx described how outbreaks began across the South after Memorial Day, then moved north to the Midwest.

“These are people that have gone on vacation, most likely, picked up the virus asymptomatic, brought it back to their location, and so you can see the virus moving up the country,” she added.

Birx said that test positivity rate can serve as a call to action for communities before the spread of the virus takes off.

The World Health Organization reported a record number of new coronavirus cases Friday – more than 350,000 in a single day.

WHO now reports a total of 36,361,054 coronavirus cases, although WHO officials have said this is a vast undercount and estimate there are likely many times that number of cases.

More closures and restrictions were announced in Canada on Friday as new, daily cases of Covid-19 doubled in less than three weeks.

Canadian Prime Minister Justin Trudeau and public health officials released new modeling Friday that showed a further doubling of new, daily cases was possible within weeks if people don’t begin to restrict their contacts by about a third.

“We're at a tipping point in this pandemic. Not only is the second wave underway, yesterday we hit the highest daily recorded cases, well above what saw this spring,” said Trudeau during a news conference in Ottawa Friday.

Ontario joined the province of Quebec Friday with targeted closures in its largest urban centers that include a ban on dine-in restaurants and the closure of bars. Both Toronto and Montreal, Canada’s two largest cities have now shuttered restaurants and bars as hospitalizations increase.

Trudeau pleaded with Canadians to stay home as much as possible, especially during the Canadian Thanksgiving holiday coming up this weekend.

“We need people to do everything they can to prevent transmission of this virus. Stay home as much as possible, listen to the public health advice, download the COVID alert app, wear a mask and really, really, pull together and lean back by stepping apart these coming weeks,” he said adding, “We flattened the curve before, we can do it again.”

Trudeau said more targeted closures, instead of a lockdown, are now possible during this second wave because more is known about how the virus is transmitted. Public health officials pointed out that while the majority of Canadian children are attending classes in-person, so far, schools have not been a significant source of transmission.

But Dr. Theresa Tam, Canada’s chief public health officer, warned that while the vast majority of new cases have been detected in Canadians under the age of 40, the virus is again gaining a foothold in vulnerable long-term care centers and that is now putting more pressure on hospitals.

"We are now observing an increase in hospitalizations in some regions and the overall number of Covid-19 cases in hospital per day has more than doubled, from 380 cases at the time of our last update to 820 cases in hospital yesterday," she said at the news conference.