Ireland recorded 1,012 new coronavirus cases on Saturday, the highest single day increase since April 15 when 1,068 cases were recorded, according to state broadcaster RTÉ on Sunday.

Writing in the Sunday Independent newspaper, Deputy Prime Minister Leo Varadkar — known as the Tánaiste — said that “a short hard lockdown” may be required to get the case numbers under control again.

Irish Chief Medical Officer Tony Holohan said in a tweet Saturday that he was “very worried” about the surge in cases and the “deteriorating” situation in the country.

Rising incidence rate: Holohan also pointed toward a 39% increase in the 14-day incidence rate over the course of the week, saying cases had increased from 108 per 100,000 inhabitants to 150 per 100,000 people. Holohan said that “case numbers are growing across all age groups and throughout the country."

Alert Level 3: The Irish government moved the entire country to national alert Level 3 on Monday after initially placing restrictions just on the capital Dublin and northern county of Donegal.

Under Level 3, indoor dining at cafes, restaurants and pubs is prohibited, indoor gatherings are confined to six people from one other household and museums, galleries and cultural attractions are closed.

Last Sunday, Ireland’s science and medical advisory body, the National Public Health Emergency Team, made a recommendation to move the country to Level 5 instead of Level 3. The recommendation was leaked to the Irish media before being addressed by the government.

Backtrack: Varadkar said in a television interview Monday that the government didn’t think the proposal “had been thought through properly.” He backtracked in the Sunday Independent, saying while heartbreaking, a short circuit breaker lockdown may be necessary to “knock the virus on the head again.”

The UK government does not want to return to a "blanket national lockdown," the UK Housing Secretary Robert Jenrick said Sunday, ahead of an expected announcement of new restrictions for England.

British Prime Minister Boris Johnson will make a statement to parliament on Monday to announce new restrictions following a record-setting increase in coronavirus infections across the country.
Although Jenrick did not provide precise details of the new measures, several British media outlets have been briefed by the government over the last week on the possible introduction of a “three-tier” system of restrictions – with the worst-affected areas facing the tightest measures.

Jenrick, who also holds the Communities and Local Government portfolios, said the government will work very closely with local authorities.

The number of cases is rising across the whole of the UK but it is very concentrated at the moment in some places in the northeast, the northwest and some other cities like Nottingham [in the central England]," Jenrick said, defending the government's regional approach to lockdowns.

"It is right that we try and pursue a localized approach and that's what we've been doing, and that is the conversation I've been having with local mayors and council leaders over the course of this weekend," he said.

Localized restrictions: Parts of northern England have are already subject to tighter restrictions than the rest of the country, including banning the mixing of households, limiting hospitality to table-service only and enforcing a 10 p.m. closure for entertainment and leisure venues.

Wide restrictions: All of England is already subject to a “rule of six,” meaning no more than six people from different households are allowed to mix.

New framework: He said "in addition to the simple national rules, we have a framework so that there is a degree of consistency in those local lockdowns."

He added that the government is working closely with local leaders, and has asked them if there are any "particular measures that they think would be effective in their communities that we could support them on and help us to bear down the virus."

"So, in addition to the national infrastructure which is developing and increasing with every passing week, we're also going to make use of local councils to do contact-tracing because there's clear evidence that local councils are good at that as you'd expect," he said.

Russia has set new daily record for coronavirus infections for the third day in a row, with 13,634 cases reported Saturday.

The total number cases in Russia as of Sunday is 1,298,718, according the Russia’s coronavirus response headquarters.

Eyebrows were raised when it emerged that the country is currently fast-tracking its coronavirus vaccine, Sputnik V, before the phase 3 human trials had begun.

Alexander Gintsburg, director of the Moscow-based Gamaleya institute, which is developing the vaccine told CNN last week that Russia was powering through the immunization's development to give people hope and not because of political pressure. 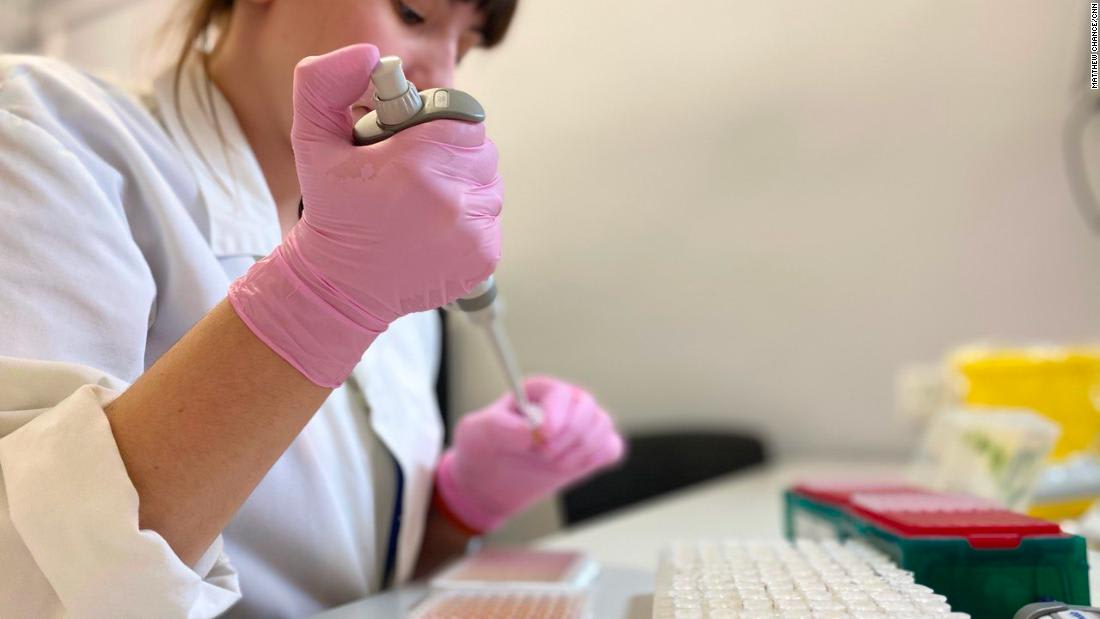 England is at a "tipping point" similar to the first wave of Covid-19, England's Deputy Chief Medical Officer Jonathan Van-Tam said Sunday in a statement.

His comments can be linked to the UK in general, given the trajectory of the infection, a Department of Health and Social Care spokesperson told CNN.

"In our national fight against Covid-19, we are at a tipping point similar to where we were in March; but we can prevent history repeating itself if we all act now," Van-Tam said.
"Scientists estimate that the doubling time in the UK for new infections is between 8 and 16 days and is even faster in some areas."
"The Scientific Advisory Group for Emergencies (SAGE) is "clear that we need to act now", as the country is in the middle of severe pandemic and the seasons are against us. Basically, we are running into a headwind," Van-Tam said.

He also said that the UK now has "much-improved testing capabilities, we know in more detail where the disease is, and we have better treatments."

The deputy chief medical officer stressed that to "help" the National Health System (NHS) it's necessary to keep the number of Covid-19 cases down.

To do that people must follow the government guidance: self-isolate if they have symptoms, and "at all times" wash their hands regularly, wear face covering in confined spaces, follow the 2 meter social distancing rules and keeping their contacts low.

The second wave has firmly established itself in Europe and the UK seeing infections soar in the past few weeks.

On Saturday, British doctors called for mandatory face masks in all offices and outdoors as Covid-19 continues to spread at a "perilous rate" in the UK, the British Medical Association said.

Erica Woodland first came out about his queer identity in middle school. In the last few years, he came out as transgender, and introduced his family to his new pronouns.

Whether we come to understand our sexuality personally, with our family or with our broader community, coming out is a process, said Woodland, a clinical psychologist and founder of the National Queer and Trans Therapists of Color Network.

October 11 is National Coming Out Day in the United States, celebrated each year to mark the anniversary of the 1987 National March on Washington for Lesbian and Gay Rights.
After generations of progress in the LGBTQ community, marked by milestones such as the Stonewall Riots 51 years ago and the US Supreme Court decision for marriage equality in 2015, coming out is more accepted than it used to be. And it doesn't just happen once.

"Coming out is not one event. I experience this in my own coming out, which is still evolving," Woodland, who uses he/him pronouns, said. "I feel like I have had several coming-out events."

National Coming Out Day: Coming out during a pandemic

Another 20,000 Covid-19 deaths by the end of the month are "inevitable," according to a former director of the US Centers for Disease Control and Prevention.

The estimate is based on the number of infections "that have already occurred," Dr. Tom Frieden said Saturday, during CNN's "Coronavirus: Facts and Fears" town hall.

Anytime we ignore, minimize or underestimate this virus, we do so at our peril and the peril of people whose lives depend on us," Frieden said.

More than 7.7 million people have been infected with the virus in the US and 214,370 have died, according to data from Johns Hopkins University.

By February, the coronavirus death toll in the US could double to about 400,000, a model from the from the Institute for Health Metrics and Evaluation at the University of Washington School of Medicine projected. Daily deaths will peak at about 2,300 in mid-January, the model predicted.

Protect yourself: Projections aren't set in stone, however, and what the public does can have a big impact, another former CDC director, Dr. Richard Besser, said.

Following guidance like wearing masks, social distancing, washing hands and investigating cases means "we can have a very different trajectory and we can get this under control," he said. 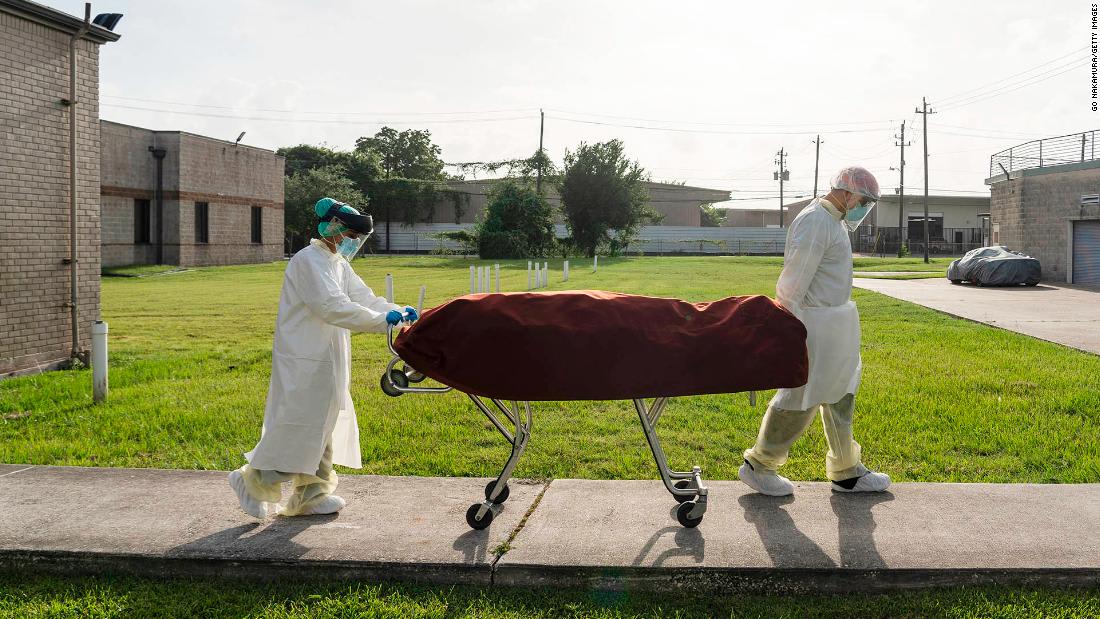 The US should expect 20,000 more coronavirus deaths by the end of the month, former CDC director says

Correction: A previous version of this story incorrectly reported the number of daily deaths predicted by a model from the Institute for Health Metrics and Evaluation at the University of Washington School of Medicine. Daily deaths will peak at about 2,300 in mid-January, the model predicts.

In France, 26,896 people tested positive for Covid-19 in the past 24 hours -- another record high for a daily increase in cases.

The numbers were updated late Saturday on the French Health Authority website.

The positivity rate (number of people testing positive) also keeps climbing. It now stands at 11%, up from 7.6% on October 1 and 4.3% on September 1.

The number of people hospitalized in the ICU is also rising. As of Saturday night, 1,456 people were in intensive care, which is eight more than the day before, according to the French Health Authority website.

As President Donald Trump stood on a White House balcony Saturday — spewing mistruths about his opponent's plan for policing and claiming the coronavirus is "disappearing" while hundreds of people watched from below — it was clear that his illness has taught him very little and he will continue to endanger Americans until Election Day.

There was a chance for a strategic pivot by the President after he contracted Covid-19 that would have helped him shore up his flagging approval ratings on the handling of the virus.

After learning a great deal about coronavirus, as he claimed during his stay at Walter Reed National Military Medical Center, he could have chosen a path of responsibility by using his platform to educate the public about the risks of the virus at a time when US cases are surging and doctors fear that the nation is entering a second wave.

But nine days after he announced his coronavirus diagnosis — and hours before his physician said he is no longer considered "a transmission risk to others" but did not say he had tested negative — Trump chose his familiar tactics of denial, risk and ignorance.

Two weeks after one super-spreader event in the White House Rose Garden, he held another on the South Lawn with no social distancing. This time, it was before an audience of Black and Latino Americans, groups who have been disproportionately harmed by the pandemic.

Rather than mitigating risk, Trump is planning at least three campaign rallies next week in Florida, Pennsylvania and Iowa, stating Saturday, "We are starting very, very big with our rallies and with our everything" as he again threw caution to the wind. 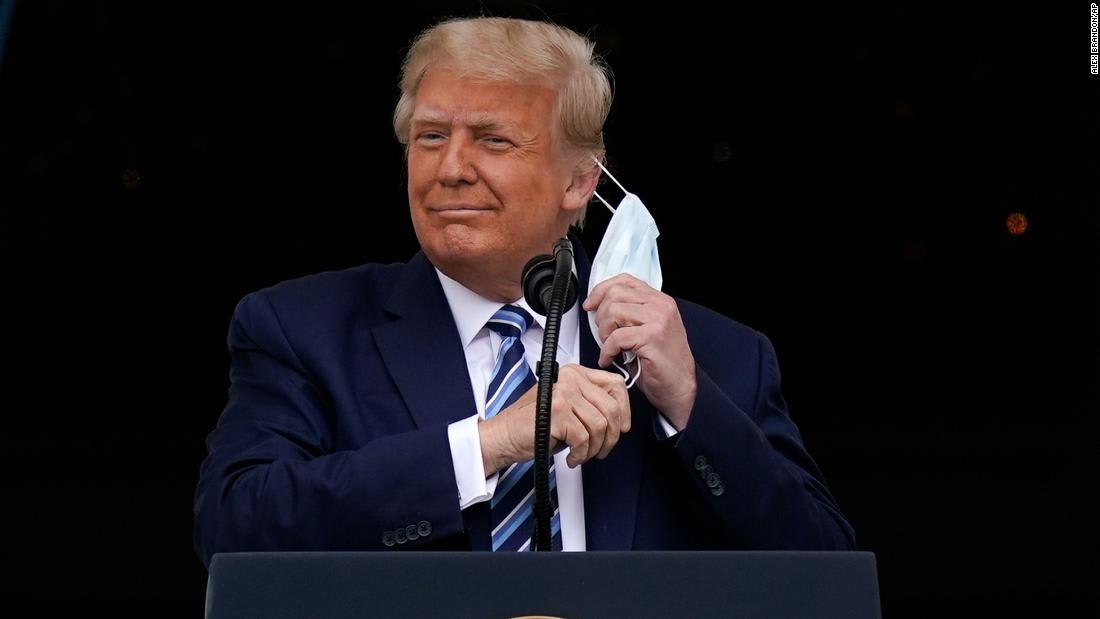