Iowa reported 100,451 coronavirus cases across the state on Monday, hitting the 100,000 mark 218 days after the state reported its first cases in March, according to numbers released by the Iowa Department of Public Health (IDPH).

To date, the state has reported 1,481 coronavirus related deaths, according to IDPH.

Iowa’s uptick in coronavirus cases stems from the outbreaks seen in the spring as clusters of Covid-19 cases popped up in nursing homes and at meatpacking plants, Dr. Ravi Vemuri, director of infection prevention at MercyOne Des Moines, told CNN affiliate KCCI.

US President Donald Trump is heading to Iowa on Wednesday for his first visit of the general election season, as several polls show him locked in a tight race with Joe Biden.

The same story is unfolding in Iowa as in many battlegrounds: Independents, women and seniors appear to be turning away from Trump, amid dissatisfaction over his handling of coronavirus and his broader conduct in office.

The Austrian capital, Vienna, has recorded 306 new infections within the past 24 hours.

Austria reported 1,028 new infections on Tuesday, bringing its total to 57,324, according to the country's public health authority, the Agency for Health and Food Safety (AGES).

Authorities there say 611 Covid-19 patients are being treated in hospital, 107 of whom are in intensive care units. Austria’s death toll stands at 861, the tally shows.

Last week, Austria recorded 1,209 new cases in 24 hours -- its highest daily increase since the outbreak began, surpassing the record set in March when the initial wave of infections was at its peak. The country has seen a gradual rise in daily coronavirus infections since late June.

In March this year, popular ski resorts in the western Austrian province of Tyrol were identified as one of the hotspots in spreading the coronavirus across Europe.

An Austrian expert commission on Monday criticized the country's Chancellor, Sebastian Kurz, for what they said was his government's poor handling of the crisis.

Crowds of people potentially infected with Covid-19 were allowed to leave the resorts of Ischgl and St. Anton in March -- helping to spread the virus across Europe -- before officials announced quarantine measures.

Ronald Rohrer, head of the panel appointed by the province of Tyrol to look into Austria's handling of the outbreak, told reporters this was "a wrong decision, from an epidemiological perspective."

"The Austrian chancellor announced the imposition of the quarantines unexpectedly, without immediate authority, and without substantive preparations," Rohrer said.

Kurz announced a quarantine on March 13, but his government had not informed the local authorities which had to implement the measures, the commission found.

The Austrian Chancellor said foreign tourists would be allowed to leave, but according to the commission, this led to a panicked rush instead of an orderly departure.

In September, Kurz said that the country's upcoming ski season would go ahead, but that apres-ski parties will be banned to try and curb the spread of coronavirus.

European Union countries have agreed to a set of criteria to make the reporting of coronavirus cases and travel restrictions easier to understand.

The EU hopes they will make travel more predictable, and help prevent further disruption caused by the pandemic.

The recommendations adopted Tuesday include a new weekly "traffic light" map that will be published by the European Centre for Disease Prevention and Control (ECDC) showing countries' different epidemiological situations.

The three categories for countries are:

The categories will be based on a clear set of comparable data from each country.

The Covid-19 pandemic has disrupted our daily lives in many ways," Michael Roth, Germany’s Minister of State for Europe, said in a statement, adding that "travel restrictions have made it difficult for some of our citizens to get to work, to university or to visit their loved ones."

The new guidelines also set out how much notice should be given when travel restrictions are to be applied when a country moves from one category to another.

A member state intending to apply restrictions should inform the affected country and the European Commission at least 48 hours in advance. Members of the public and businesses should then be given clear, comprehensive and timely information at least 24 hours before new restrictions come into place.

"It is our common duty to ensure coordination on any measures which affect free movement and to give our citizens all the information they need when deciding on their travel," said Roth.

The recommendations are not legally binding, and the decision whether to implement them remains up to each member state.

These European countries are seeing rises in Covid-19 cases:

Swiss pharmaceutical company Roche plans to launch a Covid-19 antigen test to support high-volume testing for laboratories by end of 2020, according to a news release from the company on Tuesday.

"These fully automated systems can provide test results in 18 minutes for a single test (excluding time for sample collection, transport, and preparation), with a throughput [rate of production] of up to 300 tests per hour from a single analyzer," Roche said in the release.

Roche also agreed to obtain an emergency tax approval from the US Food and Drug Administration.

France's Covid positivity rate -- the percentage of tests that come back positive -- is continuing to rise and has now reached 12.8%, the country's health authority said on Monday evening.

The rate, a key indicator of how fast the virus is spreading, now stands at more than double what it was a month ago -- 5.4% on September 12.

As of Monday night, 1,539 Covid patients were in intensive care in French hospitals. The last time the country had more than 1,500 Covid patients in the ICU was May 27, when the tally reached 1,501.

Paris: The capital is faring worse that the rest of the country, with an incidence rate of 413.2 cases per 100,000 in the city versus a national average of 166, according to the Paris region health authority.

More than 40% of ICU beds in the Paris region are occupied by Covid patients, well above the 30% threshold used to decide when areas or cities should be placed in the "maximum alert" category.

The Defense Council – a meeting of key ministers chaired by President Emmanuel Macron – is due to meet later Tuesday to discuss the next measures to be taken to slow the spread of the virus.

Government ministers have reiterated that all measures should be considered while the circulation of the virus continues to increase, including curfews and localized lockdowns.

No options are to be excluded, considering the situation we see in hospitals," France's Prime Minister, Jean Castex, said in an interview with CNN affiliate BFM-TV on Monday.

President Macron is expected to give a primetime television interview on Wednesday evening local time.

El Salvador’s President Nayib Bukele said a second wave of coronavirus was sweeping the country, describing it as a "national outbreak" in a tweet early on Tuesday.­

"We have confirmed a resurgence of #COVID19 cases. Although hospitals remain relatively empty and the pandemic is still relatively under control, the number of consecutive days with an increase in cases indicates that a national outbreak has begun," Bukele said on Twitter.

Cases of Covid-19 in El Salvador reached a peak on August 9, when the country reported a record number of 449 new daily cases.

"Whether or not this resurgence turns into an upturn in the epidemiological curve will depend on our behavior and compliance with the protection measures (wearing a mask, maintaining social distancing, washing of hands and isolating ourselves when symptoms are detected)," Bukele wrote.

As of Tuesday, El Salvador has recorded 30,480 cases of coronavirus and 899 virus-related deaths, according to official data.

Russia reported 13,868 new Covid-19 cases on Tuesday -- another record-high daily increase, according to data from the country’s coronavirus response center.

Russian officials have previously indicated that growing numbers might "require additional action" from the government, but so far haven't clarified whether they will reinstate measures similar to those imposed in the spring, when the country was officially reporting 10,000-12,000 cases a day.

Anna Popova, the head of Russia's health and consumer rights agency Rospotrebnadzor, said Tuesday the regulator sees "no sense" in shutting down the economy.

"Despite the fact that we see growth figures, today in Russia we are not talking about shutting down the economy or hitting a pause on some activities or some enterprises, some sectors of the economy, because today we do not see any sense in this," Popova said, according to state-run news agency RIA Novosti.

Moscow Mayor Sergey Sobyanin said Friday that this week would be "crucial" in any decisions to impose stricter coronavirus restrictions.

"Social distance." It's a phrase that's become a mantra of the pandemic. We see the signs everywhere telling us to stay six feet apart, emphasizing the need for physical separation. While this is an important message to help keep us all safe, the phrase has it all wrong. We don't need to be socially distant. Physically apart, yes, but that social connection is exactly what we all need during this pandemic.

"It's an extremely challenging time with mental distress," Kevin Hines tells me. He has been an advocate for mental health for almost 20 years and knows how even a single moment of connection could change someone's life.

On September 25, 2000, when Hines was 19 years old, he walked to the middle of the Golden Gate Bridge in San Francisco, and as he stared down into the water, he waited for someone, anyone to offer a kind word or even a friendly glance. That never happened. Hines jumped.

Hines says even though we may not be able to physically reach out, put our hand on someone's shoulder, we can still offer those moments of support that could change the trajectory of someone's life.

"We have got to think of the people in our lives that don't have someone physically next to them to, to hold on to," he said. "And we've got to be the people to make that phone call and make it on a regular basis."

Here are ways Hines says we can all make sure we stay in this together: 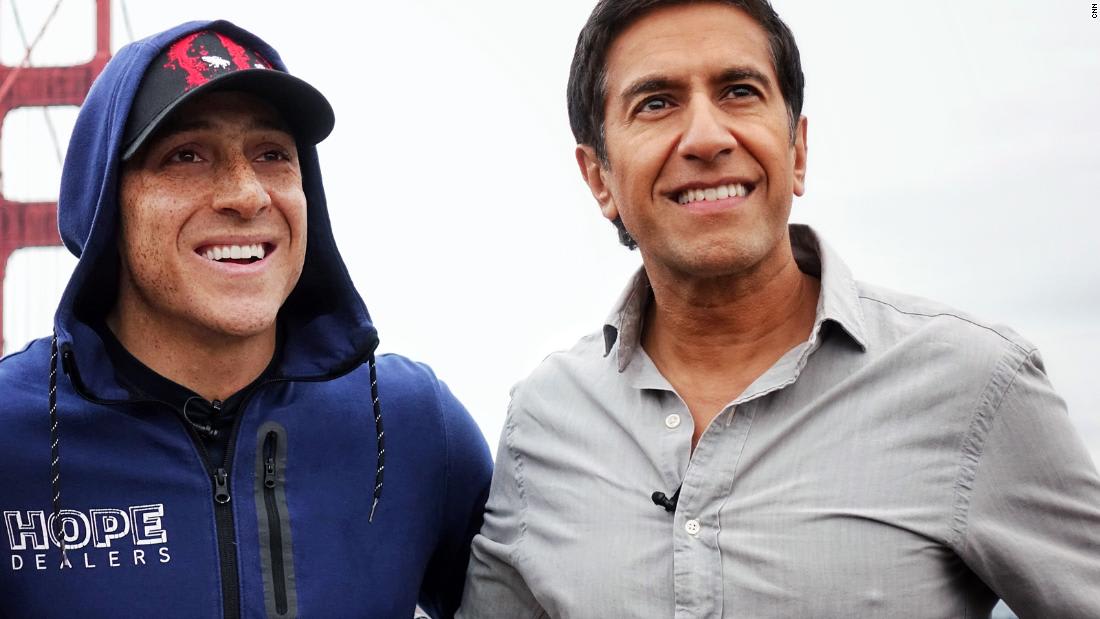 Physically, but not socially distant: How to reach out in the time of Covid

Like many travelers around the world, Jesse Takayama found his dream trip thwarted by the spread of Covid-19. But after an unexpected seven-month stay in Peru, he is finally crossing "visit Machu Picchu" off of his bucket list.

Takayama, a native of Osaka, Japan, arrived in the Peruvian town of Aguas Calientes on March 14. He already had his entry ticket and permit to enter the UNESCO World Heritage site on March 16.

Then, the Peruvian government opted to close the site -- and Takayama was stranded.

Since then, Takayama has become a local in Aguas Calientes, where he has been renting an apartment for the past seven months. However, as he started to run out of money, it looked like Takayama would have to head back home without ever having used his Machu Picchu ticket.

Enter Andean Roots Peru, a local tour company. With help from the national Ministry of Culture, Takayama was given special permission to enter Machu Picchu -- and to have the normally crowded site nearly all to himself. He was accompanied by two photographers who documented the experience.

In a celebratory Instagram post, Takayama wrote, "I thought I never make it (to Machu Picchu) but everyone asked the government and the town and they game me super special permission." He added: "Peruvians are soooo kind. Thank you soooo much!"

"The Japanese citizen has entered together with our head of the park so that he can do this before returning to his country," Peru's Minister of Culture Alejandro Neyra told reporters.