The World Health Organization's Europe Director, Hans Kluge, said he is “very worried” about the second wave in Europe, but warned against imposing national lockdowns as cases surge in the region.

Instead Kluge told CNN mask-wearing, together with strict control on social gatherings, could save around 281,000 lives in Europe over six months.

“The national lockdown is the last resort,” Kluge said, explaining that in March it was the default position but now “we know much better”.

New cases of the coronavirus are accelerating rapidly in much of Europe, and now far exceed the rise in new cases in the United States, according to data from Johns Hopkins University (JHU) and the World Health Organization. The five European countries currently most affected by the pandemic are France, the UK, Russia, Spain and the Netherlands.

Kluge said WHO Europe is calling for “local, targeted, proportional measures” that involve engaging with communities and avoiding collateral damage socially and economically.

The idea of short, sharp "circuit breaker" lockdowns has been mooted in some countries, including the UK. Kluge said government’s should consider their social impact, including mental health and domestic violence before implementing, and the two or three week time period should be used to “buy time” to get an effective track and trace system in place.

German Chancellor Angela Merkel announced she was canceling the upcoming EU special summit on China due to the coronavirus pandemic.

"In the context of the pandemic, it is clear that we are not going to allow the informal summit to take place, we have to do without it," Merkel, whose country holds the six-month EU presidency, told journalists at the end of a European Council meeting in Brussels.

"I believe this is a necessary message," she added, as European countries have been tightening health measures to cope with the second wave of the pandemic.

The summit was scheduled for Nov. 16 in Berlin.

The Vermont Department of Health is investigating a Covid-19 outbreak among members of youth and adult recreational hockey and broomball teams, leading to 18 confirmed cases so far, it said in a statement on Friday.

Officials say the outbreak is associated with individuals that practiced or played at the Central Vermont Memorial Civic Center in Montpelier earlier October. There has been no community spread of the virus beyond close contacts, the department said.

The health department has also been in touch with schools that may have had cases in attendance while they were infectious and contact tracing is currently ongoing.

A pop up test clinic is scheduled for Saturday and those with direct links to the teams, the Civic Center, and close contacts are encouraged to get tested.

The city of El Paso, Texas, is reporting a new record high daily number of Covid-19 cases, just a day after setting the record for single-day cases.

El Paso reported 838 new cases on Friday. The day before they had set a daily record with 717 new cases.

There are now 7,399 active cases in the city, according to the city's public health department. So far, there have been no new deaths reported Friday.

The city reported 423 hospitalizations as a result of Covid-19 with 112 people in the intensive care unit. On Thursday, the Texas Department of State Health Services said only 8 ICU beds were available in Region I, which includes El Paso.

US stocks retraced some of their losses from the previous session and opened higher on Friday.

The morning brought a mixed bag of economic data: September retail sales beat economists’ predictions as Americans kept shopping, but industrial production of the same month unexpectedly contracted in what was the first decline after four months of improvements.

Retail sales climbed in September for the fifth straight month as people spent on clothing, sporting goods, furniture and other items in stores and online.

US retail sales rose 1.9% in September, the Commerce Department reported Friday. That's well above the 0.7% rise predicted by economists surveyed by Refinitiv.

Retail sales had slumped to a seven-year low in April as coronavirus prompted stores across the country to shut their doors, though sales bounced back to pre-pandemic levels in July.

Economists and retail analysts say consumers have shifted their spending – away from travel and leisure and to areas such as home improvement and electronics. Sales at clothing and clothing accessories stores grew 11% in September from the month prior, while sales at sporting goods, hobby, musical instrument and book stores jumped 5.7%.

Former New Jersey Gov. Chris Christie, in his first televised interview since his release from the hospital, reiterated that no contact tracing was done by the White House after he tested positive for Covid-19.

“Well, I know that there was no contact tracing done with me, George. My contact tracing was done by my local county board of health. They called me while I was in the hospital to contact trace and make sure they have all that information, and I hope so,” he said during an appearance on ABC News when asked whether there was extensive White House contact tracing.

Christie said he has spoken to the President “a number of times,” both when he was in the hospital and since he returned home when asked whether he tried to advocate tor mask usage, adding that he’s been calling for mask usage “all along,” but “everybody's going to make their own decisions on that.”

“We should be very affirmative. Leaders, all across the politics, sports, the media, should be saying to people, put your masks on and be safe until we get a vaccine that could help to protect us,” he said.

He blamed political polarization for the mixed wearing of masks in the US.

Christie expressed regret, reiterating his statement that it was a “big mistake” not to wear a mask while he was at the White House for debate prep and the Amy Coney Barrett nomination event and made a push for leaders to “be even more affirmative” about mask usage.

“It was a mistake. You know, I was led to believe that, you know, all the people that I was interacting with at the White House had been tested and it gave you a false sense of security, and it was a mistake. You know I've been so careful George for seven months because of my asthma, wearing masks, washing my hands, social distancing and for seven months, I was able to avoid the virus and one of the worst hit states in the country in New Jersey. But I let my guard down. And it was wrong, it was just a big mistake,” he said.

“I let my guard down for a couple of days inside the White House grounds, and it costs me in a significant way,” he added.

Christie said he received the Eli Lilly antibody treatment as well as Remdesivir during his time in the intensive care unit.

Some context: The White House told staff in an email last week that it had completed "all contact tracing" for positive Covid-19 cases identified at the White House, and urged anyone who hadn't been contacted and suspected they had contact with someone infected by the virus to reach out to the White House Medical Office.

However, New York Times White House correspondent and CNN contributor Michael Shear, who tested positive for the virus following direct interaction with White House officials, told CNN late Tuesday that there's been no outreach by the White House to do contact tracing or to follow up on his condition.

At least one other White House official told CNN that they've also alerted officials that they have had direct contact with positive White House personnel and received no guidance on how to proceed.

Hear what he said: 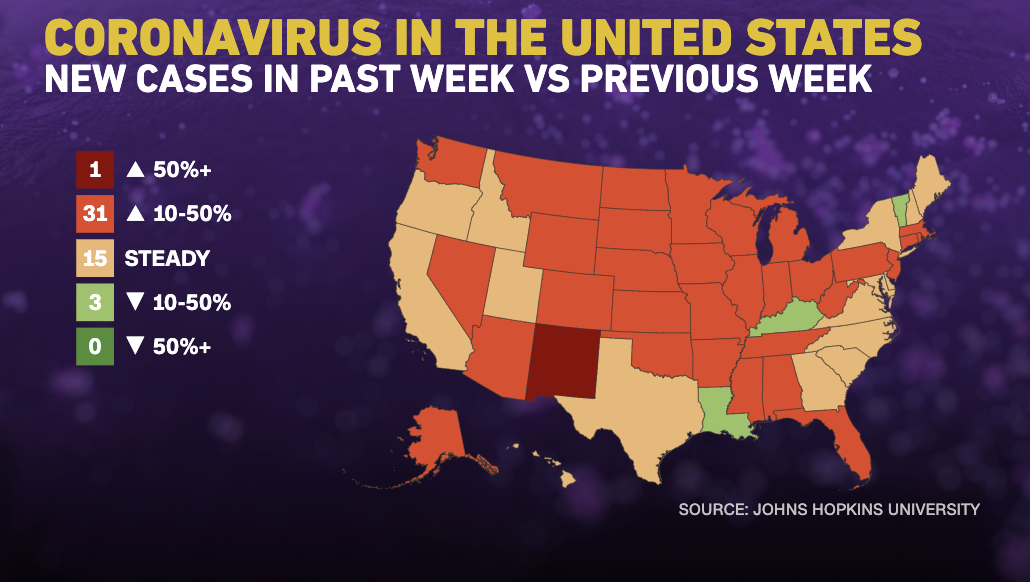