Our live coverage has ended for the day. You can read more about the coronavirus pandemic here.

News of the record comes just hours before President Trump is set to hold a rally in the state.

Sutfin told CNN they are closely tracking the data and the onset dates of illness for these cases for more precise insight into the spread of Covid-19 in Michigan.

“We are very concerned about the recent increases in COVID-19 cases and deaths and will continue to work to identify policies to protect people and slow the spread of COVID-19. It is imperative that everyone takes this very seriously and wears a mask, washes hands and maintains physical distancing,” Sutfin said.

President Trump is set to hold a rally in Muskegon, Michigan at 5 p.m. ET today. He'll have a second rally in Wisconsin later this evening. 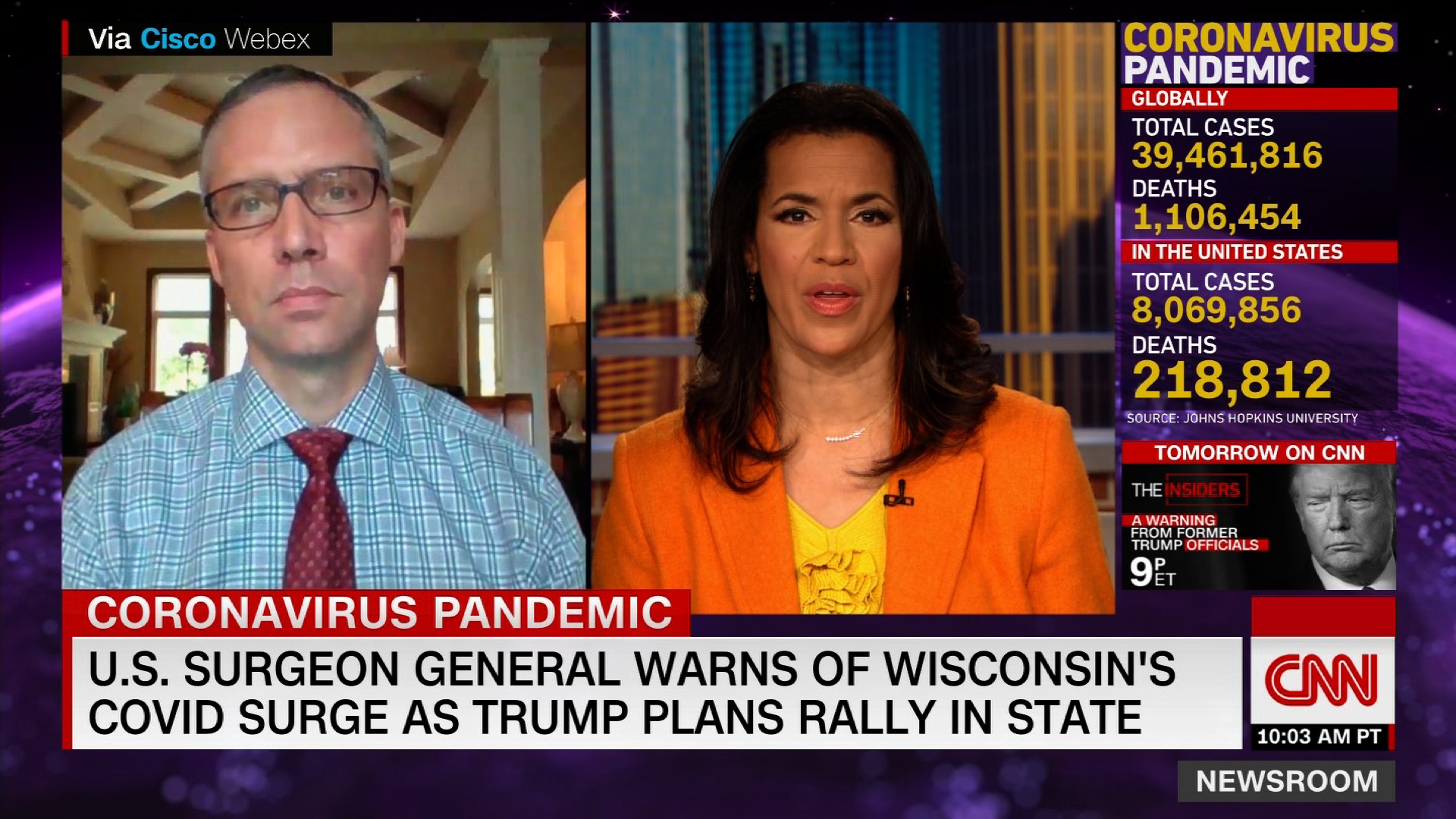 President Trump is set to hold a campaign rally in Janesville, Wisconsin, later today — but a doctor is telling residents to not hold any gatherings as coronavirus cases surge in the state.

“We’re seeing an unprecedented number of cases in the community. Rates [are] now approximately three to four times what they were during the course of the summer. And it's spreading quite quickly. So we're telling people they shouldn't be having any kind of indoor or outdoor gatherings with people, outside of the people that they actually live with at home,” said Dr. Michael Landrum, an infectious disease specialist at Bellin Health in Green Bay, Wisconsin.

Wisconsin set a new record of 3,861 coronavirus cases on Friday, according to Johns Hopkins University. The COVID Tracking Project reports Wisconsin’s positivity rate is at 23.91% as of Saturday morning.

“It’s spreading at large gatherings like weddings. It's spreading at small family gatherings. … Rates are so high in the community right now that even things that were perhaps once considered more safe, like a small interaction, someone coming over to your house to drop off some groceries and they come inside for a little bit, even that now we're seeing cases from those kinds of small interactions,” Landrum said in an interview on CNN.

University of Alabama head football coach Nick Saban was cleared to be on the sideline for tonight's pivotal game against the University of Georgia after he tested negative for coronavirus for the third straight day according to the university.

"Those three negative tests satisfied the SEC protocol for a false positive," the team's physician, Dr. Jimmy Robinson said in a statement.

Here's the statement from Robinson:

“Upon evaluation today, Coach Saban remains completely asymptomatic. To address the potential for a false positive, the SEC Return to Activity and Medical Guidance Task Force Protocol allows for follow-up testing to clear the individual’s return to activity. That protocol requires three negative PCR tests 24 hours apart.
Because Coach Saban remained asymptomatic, he received PCR testing at 7 a.m. on Thursday, Friday and today through the SEC appointed lab. Each of those tests were negative and were reported via the SEC’s third-party testing provider to the conference office in Birmingham. Those three negative tests satisfied the SEC protocol for a false positive. Out of an abundance of caution, two additional PCR tests were administered at the same time on Thursday and Friday and were tested by a separate lab. Those tests were also negative.
Due to the fact that Coach Saban has remained completely symptom-free and had five negative PCR tests, split between two separate labs, the initial test from Wednesday is considered a false positive under the SEC protocols. Again, that initial positive result came from an outside lab we’ve used to supplement the SEC mandated testing. We have been in constant communication with the conference office throughout this process to ensure compliance with all applicable protocols. In accordance with the SEC Return to Activity and Medical Guidance Task Force Protocol and with the approval of The University of Alabama System Health and Safety Task Force, Coach Saban is medically cleared to safely return to activity effective immediately.”

According to Johns Hopkins University's tally, there have been at least 8,069,856 cases of coronavirus in the US since the pandemic began. At least 218,812 people have died in the US from coronavirus.

The total includes cases from all 50 states, the District of Columbia, and other US territories, as well as repatriated cases.

North Carolina health officials reported 2,102 Covid-19 cases on Saturday, according to the North Carolina Department of Health and Human Services.

The state department reported 2,684 new cases on Friday, the state's current record, and 2,532 cases on Thursday, CNN has reported.

North Carolina's total cases now stands at 243,725, according to the health department's dashboard.

This brings the total number of cases in South Carolina to 156,655 while confirmed deaths stand at 3,427, DHEC data shows.

DHEC reported the state's percent positive yesterday was 11.4%, not including antibody tests.

Remember: These numbers were released by state public health agencies, and may not line up exactly in real time with CNN’s database drawn from Johns Hopkins University and the Covid Tracking Project

Cuomo acknowledged that the state will likely see an increase in the transmission rate in the coming months due to schools reopening and cooler weather driving people indoors. Additionally, increased rates throughout the country will continue to affect New York, because many people have continued to travel to New York, Cuomo said.

The “micro-cluster” strategy will use enhanced data that the state has been able to collect through increased testing and will enable state authorities to fight Covid-19 on a “block by block” level, rather than on a larger state, region, or county level.

Cuomo said the state has now been able to collect testing data that is so specific that they are not permitted to show it because it would violate privacy laws. However, the data will allow the state to target Covid-19 clusters to the block(s) where it is originating, and therefore allow for targeted mitigation and enforcement efforts, he said.

By fighting “micro-clusters” at the block level, rather than at a larger state or county level, mitigation efforts will cause less disruption to other areas with low transmission rates, Cuomo said.

When a “micro-cluster” is identified, the state will ramp up testing, mitigation, and social distancing enforcement in those specific areas, Cuomo said, adding that this approach would continue even after a vaccine becomes available.

Covid-19 cases are surging across Europe, and some areas are implementing new restrictions to fight the second wave of the pandemic.

Here's a look at some of the latest coronavirus figures across the continent:

New York movie theaters outside of New York City and not in “red zones” with high Covid-19 rates may reopen on Friday at 25% capacity, Gov. Andrew Cuomo said at an ongoing press conference on Saturday.

Theaters will be allowed to have a maximum of 50 people per screen, Cuomo said.

Cuomo added that only counties outside of New York City that are below a 2% positivity rate over 14 days and have no cluster-zones will be able to reopen their movie theaters.

Masks will be required at all times, except when seated and eating or drinking. All seats must be assigned, social distancing guidelines must be adhered to, additional staffing is required to control occupancy and seating compliance and and all theaters will be required to meet enhanced air filitration, ventiliation, and purification standards, Cuomo said.

The Biden campaign has announced that Sen. Kamala Harris will travel to Florida Monday.

This will be her first in person campaign event since the campaign announced Thursday that Harris was canceling all her events through the weekend “out of an abundance of caution” after her communications director and a flight crew member from her plane tested positive for coronavirus.

Harris underwent PCR testing for Covid-19 Friday. The virus was not detected.