There are only two states in the country — Vermont and Missouri — that are reporting a more than 10% improvement in the average number of reported cases over the past week, according to data from Johns Hopkins University.

Meanwhile, cases in Connecticut and Florida increased by 50% or more. Another 27 states rose between 10% and 50%.

Here's a state-by-state look at coronavirus cases across the US: 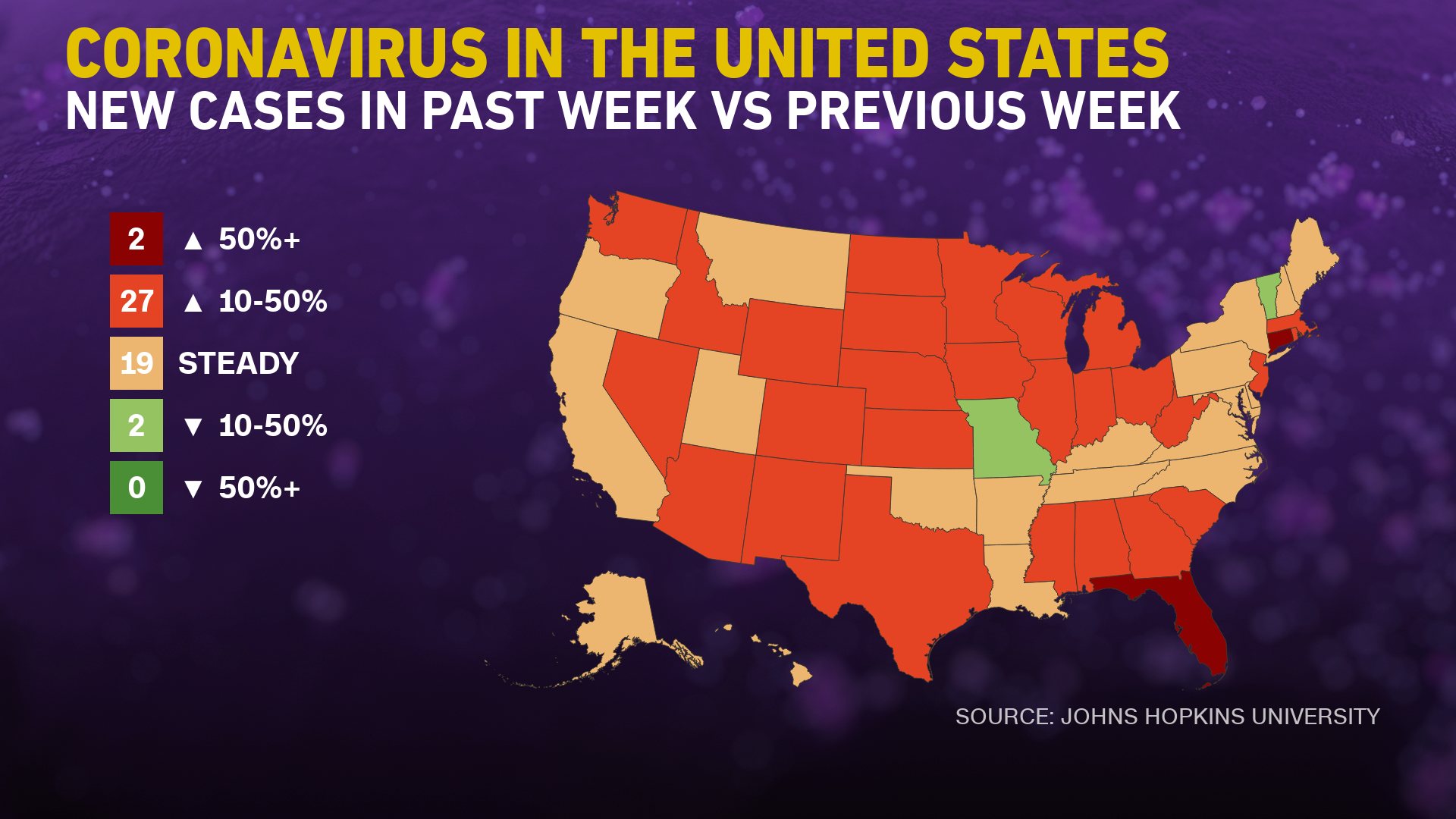 There have been at least 8,106,384 cases of coronavirus in the US, and at least 219,286 people have died, according to data from Johns Hopkins University

Keep in mind: The Wisconsin Department of Health Services announced on Saturday that due to routine maintenance and updates to their data reporting system, we will not see any new data from the state of Wisconsin on Saturday or Sunday.

Israel has begun easing some of the restrictions imposed last month during the country’s second general lockdown, as the number of daily coronavirus cases continues to fall.

On Thursday and Friday, Israel recorded 1,608 new cases and 1,469 new cases, respectively, and a positivity rate of approximately 4.2%, according to data from the Ministry of Health. Those numbers are down from a record 9,000 new cases in one day, seen at the peak of Israel’s second wave a few weeks ago, when the positivity rate stood at well over 10%.

Prime Minister Benjamin Netanyahu said the reopening of the economy would go slowly, tacitly acknowledging that the reopening after the first lockdown was done too quickly and without proper safeguards. “It is important to follow the rules,” Netanyahu stressed Saturday evening.

“If we all follow the rules, then I am certain that this will work. Another thing, I have said that if it appears that it is not working, if it appears that we are going backwards, then we will have no choice but to retighten the restrictions.”

Israel has a number of “red cities” with high infection rates that will not reopen and where tight restrictions will remain in place.

These are predominantly ultra-Orthodox cities and areas where the spread of coronavirus has not seen the same drop as the rest of the country. These “red cities” include Elad, Beitar Illit, Modi’in Illit, and ultra-Orthodox neighborhoods in Jerusalem.

As coronavirus cases spike across the continent, European governments are facing a new obstacle in their efforts to enforce restrictions -- with several major cities and regions fighting back against instructions to lock down in recent days.

Cities in the UK, France, Spain are resisting centralized efforts to impose tighter regulations, with days of tense negotiations ongoing as infections increase.

In the northern English city of Manchester, UK Prime Minister Boris Johnson has become engulfed in a row with local mayor Andy Burnham over whether to move the city from the UK's second tier of restrictions to its most severe third tier.

"If an agreement cannot be reached, I will need to intervene in order to protect Manchester's hospitals and save the lives of Manchester's residents," Johnson said on Friday, urging Burnham to "reconsider his position" and "engage constructively" with the government.

But Burnham has resisted the government's efforts to increase the severity of his city's measures, urging for more financial measures to protect the region's workers placed under stricter rules.

The row escalated on Sunday as Michael Gove, a member of Johnson's Cabinet, called on Burnham "to put aside for a moment some of the political positioning that they've indulged in."

And a similar scenario is unfolding across Europe, as leaders grapple with the difficulties of pursuing a "whack-a-mole" approach to slowing the spread of Covid-19.

A resident at Casa Santa Marta, the building in the Vatican that houses the Pope and other clergy, has tested positive for Covid-19.

The resident is currently asymptomatic and has been placed in isolation outside of Casa Santa Marta, along with all who came into direct contact with him, Holy See spokesperson Matteo Bruni said in a statement.

The health of all other residents is being constantly monitored, he added.

The positive test raises fears over the well-being of 83-year-old Pope Francis and other senior clergy, and comes days after four members of the Vatican's Swiss Guard tested positive.

Those guards were all showing symptoms and a contact tracing operation began at the Vatican after their results came through, Bruni said earlier in the week. Three other Vatican residents also tested positive in recent days, it was announced at the time.

Vatican City, which is a city-state located within Rome, is the home of the Pope and the headquarters of the Roman Catholic Church.

Italy reported more than 5,000 new coronavirus cases on October 9, which represents the highest daily rise in new Covid-19 cases since March 28. The Italian Council of Ministers passed a decree on Wednesday that requires the mandatory use of masks outdoors in an attempt to slow down the spread of the virus across the country.

A national two to three weeks "circuit-breaker" lockdown to try to tackle the increase of Covid-19 cases in the UK has been ruled out “at the moment,” UK Cabinet Office minister Michael Gove said Sunday.

Asked if the government would take the measure, Gove told Sky News on Sunday: "No," arguing that the spread and nature of the disease "does not merit" the step "at the moment."

"It would seem an error to try to impose on every part of the country the same level of restriction when we know that the disease is spreading more intensively and quicker in some parts of the country," Gove said, adding that the nature of the epidemiology is "different" in this wave.

The opposition Labour Party has called for a short "circuit-breaker" lockdown to tackle rising infection counts in the country.

Asked whether the lockdown could be implemented in the future, the minister said: "we always look at how the disease spreads and we will take whatever steps are necessary to maintain public health."

As President Trump visited two states seeing major spikes in Covid-19 cases, he did not talk about the rising rates there or what the administration may do to try to curb the increases being seen nationwide.

Trump went to Michigan -- which on Thursday and Friday saw more than 2,000 cases each day, its highest daily case rates yet -- and Wisconsin, which set records this week regarding its case numbers. Friday was the sixth highest case total since the start of the pandemic.

At both rallies, and in keeping with his previous events, thousands of attendees did not wear masks. However, those who were chosen by the campaign to sit right behind the President at both events to be captured as part of television images of the President speaking were seen wearing Trump masks. Neither event featured social distancing.

Trump's speeches covered familiar ground, with the President claiming the nation needs to open up, China is to blame for the virus, and he has recovered quickly. He also touted what he claimed was his immunity towards the virus, although it is not known if that is medically accurate.

In Janesville, Wisconsin, Trump again emphasized erroneously that the nation was "rounding the corner," even as it heads into what appears to be a third spike in cases. "You’ll see it. We’re rounding the corner,” he said. A vaccine for the virus is close, Trump claimed, “except for a little politics." There is no evidence that progress towards a vaccine has been slowed due to political machinations.

Trump told his supporters how some states previously have seen spikes but are now going in the right direction: “My plan will crush the virus and will make Wisconsin greater than ever before, that’s what’s going to happen. It’s going to happen fast."

He also erroneously blamed reports of increases – which actually come from non-partisan universities – on Democrats.

During the rally in Muskegon, Michigan, he blamed the pandemic for his current political standing, without citing evidence. “You know, we were leading by so much, this thing wasn't even going to be an election, and then we had the plague come in. You know, this was, I had to go back to work on this stuff.”

Trump did talk about his recovery in both rallies. “Hey I'm here! Me I'm here. Right?” he told the Michigan crowd.

The US state of New Mexico is experiencing a 101% increase in Covid-19 hospitalizations so far this month, Governor Michelle Lujan Grisham said in a tweet Saturday.

A total of 173 people are currently hospitalized with the virus in the state, according to the governor.

On Saturday 577 new coronavirus cases were reported for a total of 36,343 cases in total statewide, Lujan Grisham said.

This comes after the state saw three record breaking days for new Covid-19 cases this week, according to a tweet from the governor Friday.

One additional death was reported Saturday for a total of 929 deaths statewide, she said.

"Every New Mexican can and must do their part to stop the spread of COVID-19 by staying home, limiting their interactions with others, and wearing their masks," Lujan Grisham said in another tweet.

The governor already tightened restrictions in the state earlier this week due to the rise in cases. The new rules started Friday and include bars and restaurants having to close by 10 p.m. local time and mass gatherings being limited to only five people.

After seeing a recent surge of infections across Slovakia, Matovic explained that it was his belief the only way to contain the outbreak is through mass testing.

Speaking to the nation in a televised address, Matovic promised that if the widespread testing does not happen, he would tender his resignation.

“I’m afraid that the current protective measures have thus been rendered useless,” Matovic said. “At any rate, this mass testing cannot hurt, it can only help us.”

According to TASR, Matovic said “testing will be free-of-charge” for the population of 5.4 million. The campaign is expected to take place over two weekends starting at the end of October.

It is not yet known whether participation will be mandatory, TASR said.