All public school instruction in Boston will be remote starting Thursday, following a rise in Covid-19 cases, according to a statement released Wednesday by Boston Public Schools.

The statement cited a 5.7% seven-day Covid-19 positivity rate for the city of Boston, up from last week's rate of 4.5%.

“We have said all along that we will only provide in-person learning for students if the data and public health guidance supports it, and this new data shows that we are trending in the wrong direction,” said Mayor Marty Walsh in a statement

The decision comes less than a week after the district announced that it was delaying in-person instruction.

“I am heartbroken that today we have to close our doors to our highest need students," Superintendent Brenda Cassellius was quotes as saying. "Our families are desperate for these services for their children, many of whom are non-verbal and unable to use technology in the home."

On Twitter Wednesday morning, Cassellius said she was "disheartened."

"It is the adults who create the conditions in which children succeed," she wrote. "We must do better. Please wear a mask, avoid large gatherings & stay home if sick so we can bring our children back to school."

In-person instruction will resume when infection rates fall for two straight weeks, according to the district.

It is growing increasingly likely that passing any stimulus deal through Congress will have to wait until after the Nov. 3 elections, according to multiple sources in both parties.

While it's possible a deal in principle between the White House and House Democrats can be reached before Nov. 3, passing a bill through both chambers is highly unlikely before then.

That's because of the sharp disagreements within the GOP, the logistical hurdles of passing legislation quickly of this magnitude through both chambers and the fact that Speaker Pelosi and Treasury Secretary Steven Mnuchin still have many outstanding details to sort through.

Pelosi has not yet told her colleagues if she'll bring the House back to session next week to vote on the stimulus, sources said. So it's still possible the House could return next week just days before the election.

But the Senate is likely to adjourn after Monday when Amy Coney Barrett is confirmed to the Supreme Court, though the final schedule has not yet been announced.

After Pelosi and Mnuchin blew past the speaker’s self-imposed Tuesday deadline, which she said was essential to getting a bill passed by the elections, she also subtly adjusted her language.

"I remain hopeful that we can reach an agreement before the election," Pelosi said in a letter to her colleagues last night.

What could come next: Reaching an agreement, of course, is different than passing a bill. Plus Senate Majority Leader Mitch McConnell has no appetite to put a major stimulus bill on the floor that will divide his party just days before the election, something he reiterated to his colleagues at lunch on Tuesday. The Senate GOP is largely opposed to a bill around $2 trillion, which Pelosi and Mnuchin are discussing, as Republicans try to advance their $500 billion bill this afternoon after Senate Democrats blocked it last month.

What Pelosi really wants is to clear the decks and pass a major bill to help Joe Biden if he wins the presidency, sources familiar with her thinking said, meaning that final passage could wait until after the November elections and before January during the lame-duck session.

Still, it's anyone's guess how the outcome of the elections could scramble the political calculations of the White House, Senate Republicans and Democrats as well -- adding uncertainty to how action in a lame-duck session would play out.

"The election is less than two weeks away, and I believe we will be back in Washington a week or two after the elections and we could something then," Clyburn said. "At least the elections will be behind us, people will know what their futures are and maybe they will be more apt to sit down and get serious about things after their electoral prospects have been settled."

He laid out some safety guidelines for the holiday:

The mayor also stressed a mask in a costume “is not the same as the kind of mask we use to protect ourselves and each other.”

Here are the latest numbers on coronavirus in New York City: 1.56% of people tested positive citywide, keeping the number under the 5% threshold, de Blasio said. The seven-day rolling average is 1.68%.

In addition, 77 people were hospitalized. New York City is also reporting a seven-day average of 493 new reported cases, with a threshold of 550 cases.

Five schools are on a 14-day shut down, though one is coming out of the shutdown Thursday.

One note: These numbers were released by the city's public health agency, and may not line up exactly in real time with CNN’s database drawn from Johns Hopkins University and the Covid Tracking Project.

New York City Mayor Bill de Blasio focused on vaccines Wednesday morning, outlining how that the city will prioritize frontline workers and vulnerable populations when a vaccine is approved for use.

“The vaccine will be a crucial part of our rebirth” and economic recovery, de Blasio said.

“We don’t have the exact data, no one has the exact date,” he said. “What we do know…it will be sooner rather than later.”

It's important to have a “fair” plan and for it to be free for those who need it, de Blasio said.

He said it's paramount to make sure the vaccine is first “safe” and “effective.”

The city will prioritize frontline workers in the first phase: Health care personnel, frontline and essential workers, “the folks that are making this city run no matter what," he said. “And of course the most vulnerable New Yorkers, the folks that are in the most danger from this disease.”

The second phase is the general public and wide distribution.

Spanish football giants FC Barcelona on Wednesday began the process of introducing new salary reductions for players and staff as the Covid-19 pandemic continues to have a crippling effect on the club’s finances.

It comes after Barca had imposed a temporary pay cut of 70% on the playing squad earlier this year to support the club’s non-playing employees during Spain’s State of Emergency.

“The Club's objective is to reach an agreement with the organisation's entire labour force, which takes in a joint solution of temporary, gradual, proportional salary adjustments, specific to each collective,” read a statement.

It added that the club is anticipating a drop in revenue of more than 30% for the coming year and is therefore “obliged to find immediate solutions to reduce expenditure.”

The club announced on Tuesday that goalkeeper Marc-Andre ter Stegen, defenders Clement Lenglet and Gerard Pique and midfielder Frenkie de Jong have already agreed to a “temporary salary adjustment” as part of their respective contract extensions. 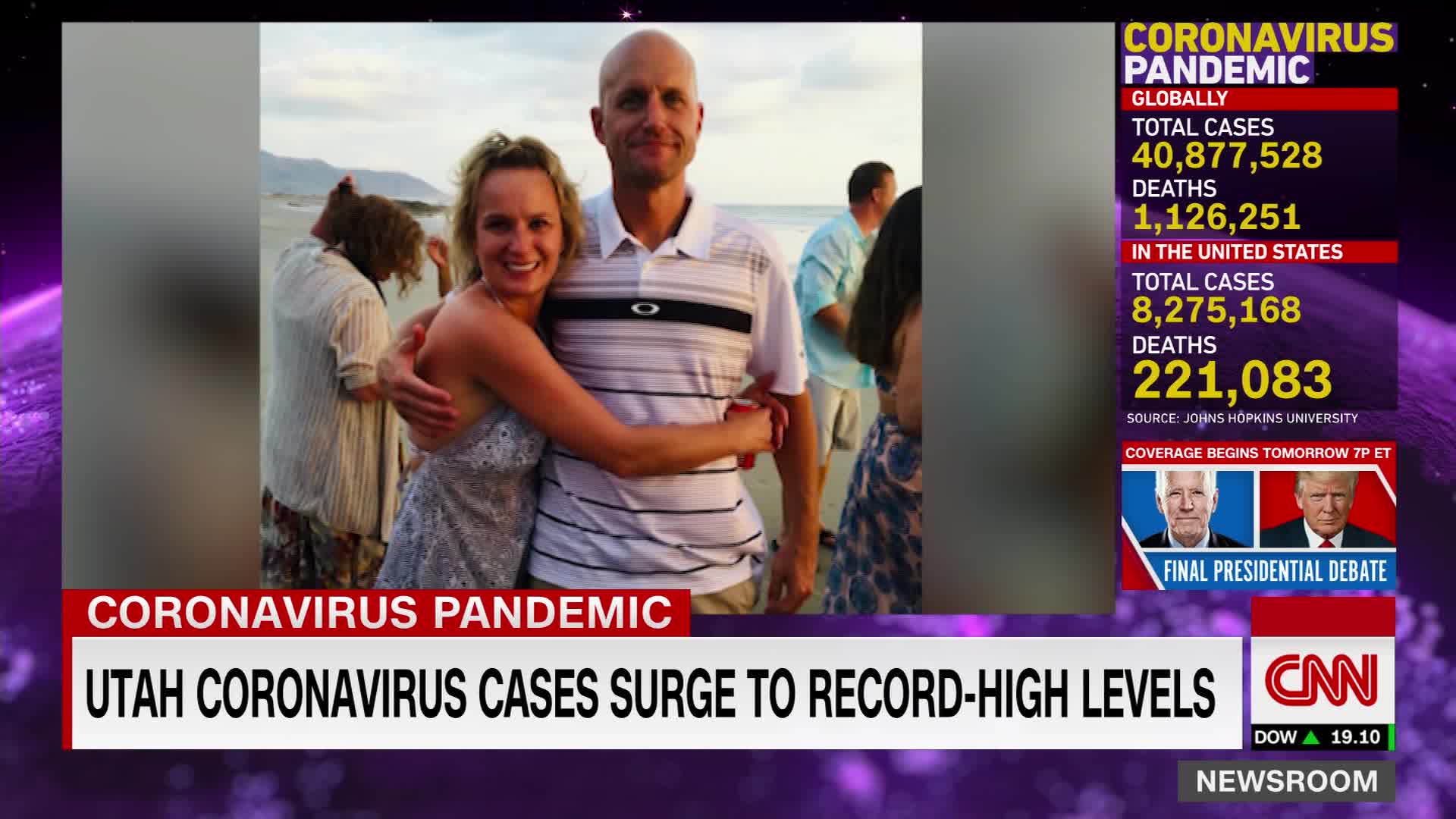 Covid-19 nearly killed Laurie Terry even though she never contracted it.

The 47-year-old had a serious heart attack and needed to get to an intensive care unit to survive, doctors at the local hospital told her family. For hours, nurses called hospital after hospital but couldn’t find a bed.

“They didn't have bed space in a critical care unit to treat my sister because of Covid. I believed we would lose her right there. Right there. Because she couldn't get medical care in the United States,” Terry’s sister Stephanie Deer said.

A surge in coronavirus cases in Utah has led to increased hospitalizations and ICU admissions. Health experts are beginning to see how the pandemic is creating a dangerous competition for medical resources as other life-threatening cases continue to come in during the pandemic. And it could potentially kill someone without actually infecting them, Martin Savidge reports.

“There are front line providers in the emergency room, our nurses, our doctors on all these Covid units in the ICU working tirelessly. It's kind of like people just are going out and living their lives not realizing that they are exhausting our health care system,” says Dr. Emily Spivak, associate professor of medicine at the University of Utah.

Eventually, Terry was able to get the expert medical help she needed, but she’s suffered medical setbacks because of the delay in finding an available ICU bed. Deer says she can't forget how Covid-19 nearly killed her, and she blames the carelessness of others.

“They need to wear a mask. They need to care about their neighbors, their family, their children, and they need to do it right now,” she told CNN.

The health department in El Paso, Texas, is reporting a seven-day Covid-19 positivity rate of 13.74%, the highest average in the city since the pandemic began.

There are 670 new positive cases in El Paso on Wednesday morning, according to the health department's dashboard. It also shows that of the 34,760 total cases, 8,820 are currently active.

There are currently 579 people hospitalized with the virus from El Paso, with 148 in intensive care units. This is the highest hospitalization rate in the city since the pandemic began, the dashboard shows.

The Texas Department of State Health Services shows that Trauma Service Area I, which includes El Paso, currently has 345 beds and 17 ICU beds available as of 3:00 p.m. local time on Tuesday.

One thing to note: These numbers were released by the city’s public health agency and may not line up exactly in real time with CNN’s database drawn from Johns Hopkins University and the Covid Tracking Project.

Coronavirus cases in South Africa’s Western Cape province have risen by 42% in the past seven days, leading the country's Health Minister Dr Zweli Mkhize to warn of a “resurgence” of the virus.

Mkhize, who is currently isolating after testing positive, said the country is "seeing concerning increases in some of the provinces," including this "marked increase" in the Western Cape, home to the port city of Cape Town.

"According to our resurgence plan, we define this significant spike in new cases in the Western Cape as a resurgence," he said Wednesday in a statement on Twitter.

Mkhize explained the Western Cape Provincial Health Department has identified clusters that are responsible for the increase in cases. He said the “single biggest cluster outbreak” was “associated with a super-spreader event in a bar".

He also said country-wide epidemiological reports are showing that over the last seven days there has been an increase of 9.1% in new cases.

Cases of coronavirus are rising across Europe, and the continent's second wave has prompted some countries and areas to implement new restrictions.

If you're just reading in now, here are some of the latest updates on the situation in Europe: