The number of coronavirus cases in Europe has exceeded the 10 million mark since the beginning of the pandemic, with more than 1.5 million cases confirmed last week alone, the World Health Organization’s Europe director Dr. Hans Kluge said Thursday.

“Europe is at the epicenter of this pandemic once again,” Kluge said at a meeting alongside European health ministers.

“At the risk of sounding alarmist, I must express our very real concern and convey our steadfast commitment to stand beside you and support you as best we can.”

The situation in Europe: Kluge warned that hospitalizations have risen to “levels unseen since the spring,” with cases moving from 7 million to 9 million in the past two weeks and deaths rising by 32% across the region last week.

Testing systems have not kept up with “very high-speed transmission,” and test positivity rates have reached new highs in most European countries.

Return to lockdown: As Europe is well into its second wave, many countries are implementing new restrictions in an attempt to curb the spread of the coronavirus.

With France introducing a national lockdown from Friday, Kluge said lockdowns were a “last resort option” because they bypass the “still-existing possibility of engaging everyone in basic and effective measures.” 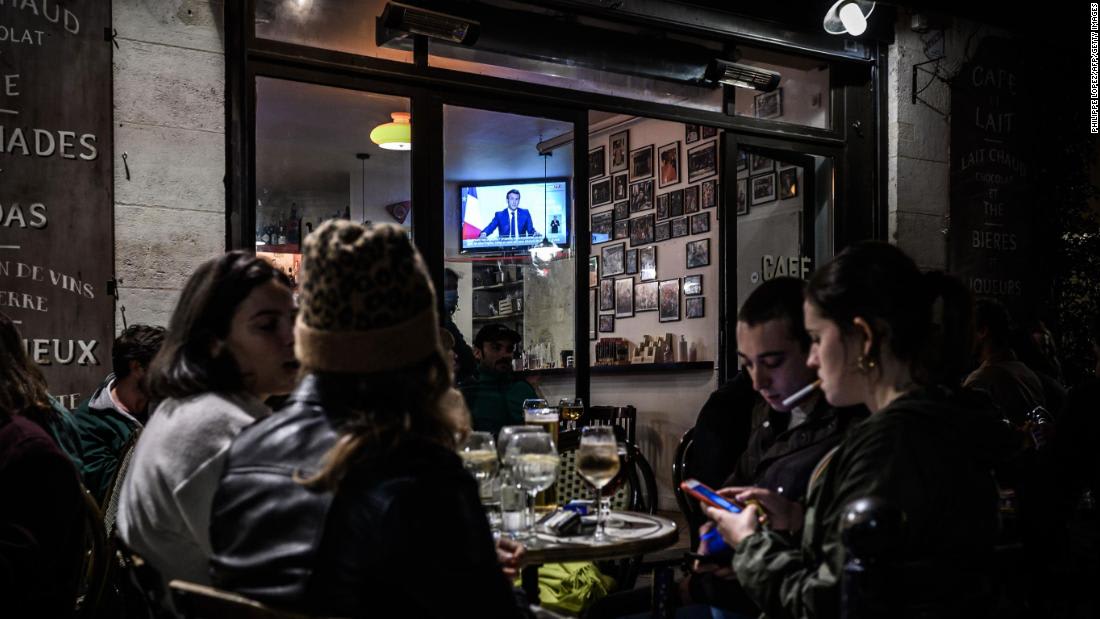 Europe tried a scalpel on the second wave. Now it's going back to the sledgehammer

House Speaker Nancy Pelosi and Treasury Secretary Steven Mnuchin, the two top negotiators for a new round of coronavirus relief, are engaged in open warfare after weeks of private negotiations -- casting new doubt on whether they will be able to reach agreement on stimulus legislation even after the November election.

On Thursday afternoon, Mnuchin slammed Pelosi in their highest-profile clash so far, saying the speaker is refusing to compromise to get much-needed aid to Americans.

“Your ALL OR NONE approach is hurting hard-working Americans who need help NOW,” Mnuchin wrote in a letter.

His remarks came after Pelosi sent her own letter to Mnuchin earlier Thursday that emphasized just how divided the two sides remain on the details of a potential stimulus bill, and hit the Trump administration for not accepting Democratic demands on key issues.

"The American people are suffering, and they want us to come to an agreement to save lives, livelihoods and the life of our American Democracy as soon as possible," Pelosi wrote.

Mnuchin said he first learned of Pelosi’s letter from media reports Thursday morning, and he “can unfortunately only conclude that it is a political stunt.”

What this means for the bill: The confrontation between the two is inauspicious for the odds of a new stimulus bill. When everyone else had essentially given up on the idea of another round of coronavirus relief over the summer, Pelosi and Mnuchin continued to have phone calls to negotiate and work towards a deal.

With Democratic leaders standing firmly behind their call for a massive aid package and Republican lawmakers instead advocating for a much smaller, targeted bill, an agreement never really appeared imminent.

But Pelosi and Mnuchin continued to insist progress was being made -- and sometimes, it was. Both had previously expressed hope that a deal could be finalized before Election Day, but talks have faltered in recent days.

At a news conference earlier in the day, Pelosi said the talks were not over. She indicated she is eyeing the congressional lame duck session after the election as an opportunity for lawmakers to approve new aid.

Dr. Deborah Birx emerged from a meeting at the White House one day in late summer with a new resolution: Never again would she sit in a meeting with Dr. Scott Atlas and listen to him pontificate on the pandemic.

That's when she went all-in on a plan to essentially abandon the White House and avoid the growing influence of Atlas, a radiologist with no expertise in epidemiology who was nevertheless rising in influence with President Donald Trump.

Birx, a physician with decades of experience in global health, told a friend that she would take her message directly to the people and simply sidestep the kind of misleading messages she'd just heard from Atlas in that meeting. The friend requested anonymity to discuss the exchange with CNN.

Now Atlas is Trump's single go-to adviser on the coronavirus. And Birx, one of the most prominent figures of the early pandemic, is in North Dakota.

She has now been to 40 states and logged more than 20,000 miles, many of them since that fateful August meeting. She tours the country by commercial air, advising small groups of state and local officials on combating transmission. She pulls a small suitcase packed with essentials and an array of the signature scarves she wears each day. Her friends call it her "self-exile."

"Her personality is to pick up and go where the fight is," said a colleague of hers for many years. "She always told us -- keep your bags packed. She'd say if you're assigned to another country, don't sit in the embassy -- go to the distant villages. You need to go where the action is, see what they are doing."

It's a handy personal credo given that Trump hasn't consulted in person with Birx in months. She still belongs to the White House coronavirus task force, but it rarely meets these days and its reports aren't widely disseminated. The President isn't deploying her to anything, so she's deploying herself. 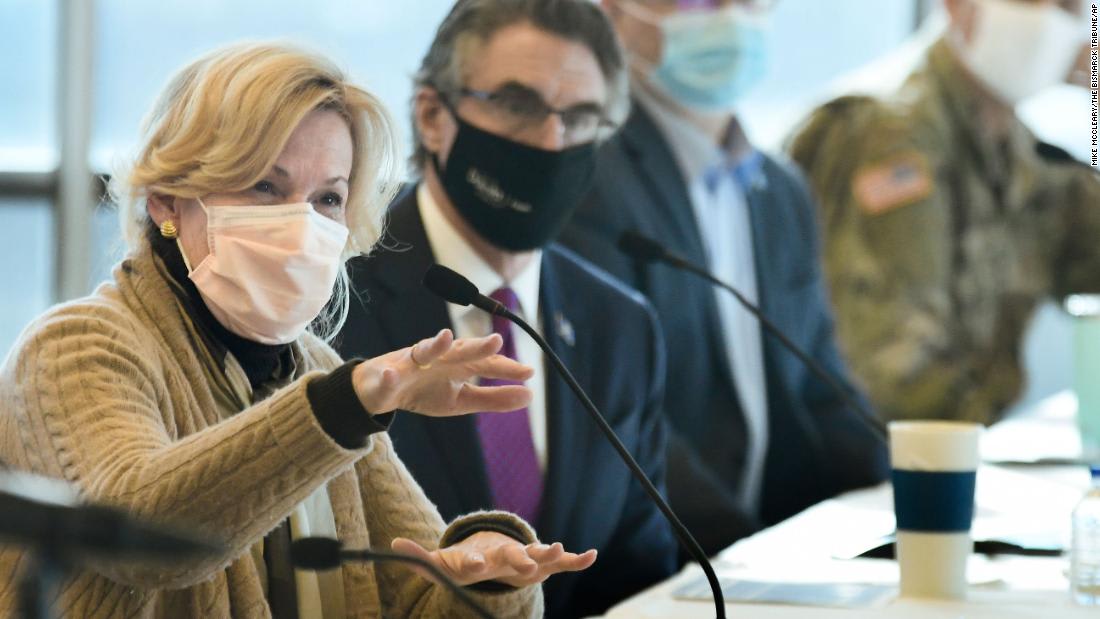 An influential model of the coronavirus pandemic has predicted 399,000 total coronavirus deaths in the US by Feb. 1, a 15,000-death increase over last week’s prediction.

The Institute for Health Metrics and Evaluation at the University of Washington School of Medicine said it’s most likely that by the middle of January, 2,250 Americans will be dying every day from coronavirus – three times more than the current rate.

“If states do not react to rising numbers by re-imposing mandates, cumulative deaths could reach 514,000 by the same date,” the IHME said in its latest forecast. “The fall/winter surge should lead to a daily death toll that is approximately three times higher than now by mid-January. Hospital systems, particularly ICUs, are expected to be under extreme stress in December and January in 18 states.”

The IHME said if states would require mask use or find other ways to encourage more people to use them, fewer people would die.

“Scaling up mask wearing can delay the need for further social distancing mandates and save 62,000 lives by February 1,” it said.

Cases and deaths have skyrocketed across the US in recent days and Thursday saw the highest single Covid-19 case count on record in the US, with cases passing 83,757 before 8 p.m. ET.

Public health officials reported 1,745 new cases of Covid-19 on Thursday and 19 additional deaths, for a total of 305,070 positive cases and 7,044 deaths in the county since the start of the pandemic. The increase was not associated with a backlog of data.

Some context: The rise in new confirmed cases came as public health officials expressed growing alarm over a recent increase in infections, some of which can be attributed to fans gathering for parties and events to watch the city’s MLB and NBA teams win championship titles.

“The high numbers of daily cases are very concerning because, as we have seen in the past, increases in cases lead to increases in hospitalizations and deaths,” Dr. Barbara Ferrer, the Los Angeles County director of public health, said in a statement Thursday. “As individuals, we get to choose whether to party or help our economy recover; we get to choose whether to protect others from our respiratory droplets or infect others who may go on to need hospital care or even die.”

Los Angeles County, the nation’s most populous with 10 million residents, remains in the first of California’s four-tier coronavirus reopening system, where the disease is considered “widespread,” forcing the closure of most nonessential indoor business operations.

There have been 85,357 daily new coronavirus cases in the United States, according to data from Johns Hopkins University.

This is now the highest single-day reporting since the pandemic began.

To note: These numbers were released by the state’s public health agency and may not line up exactly in real time with CNN’s database drawn from Johns Hopkins University and the Covid Tracking Project.

Ohio recorded at least 3,590 new Covid-19 cases Thursday, the highest daily count in the state since the pandemic began.

"The virus is raging throughout the state of Ohio. There is no place to hide," DeWine said at a news conference Thursday.

Righty now, 78% of state residents are living in a county labeled "red" for "very high exposure and spread."

DeWine announced that he's asked leaders of every community to create a "Covid Defense team" that should include county commissioners, mayors, local hospital leaders, business leaders and religious leaders. The teams should assess and understand the situation and focus on what steps to take to turn the situation in their community around.

While businesses and establishments are following restrictions, the virus is spreading in private social events, Lofgren said.

To note: These numbers were released by the state’s public health agency, and may not line up exactly in real time with CNN’s database drawn from Johns Hopkins University and the Covid Tracking Project.

The country’s second largest city of Thessaloniki along with the city of Larissa and the Rhodope region will enter lockdown starting Friday at 6 a.m. local time. These brings the total regional lockdowns to seven.

He said his aim remains to avoid a national lockdown and instead will focus on the intensification of the containment measures. Greek media outlets have reported that a stricter curfew could be announced.

According to Greece’s National Public Health Organization, Greece has recorded 35,510 coronavirus cases and 615 deaths from the disease in total.