Drugmaker Pfizer has said its coronavirus vaccine is more than 90% effective according to an early look at data -- a much better than expected efficacy if the trend continues.

A so-called interim analysis from the company examined the first 94 confirmed cases of Covid-19 among the more than 43,000 volunteers who received either two doses of the vaccine or a placebo.

"With today’s news, we are a significant step closer to providing people around the world with a much-needed breakthrough to help bring an end to this global health crisis,” Pfizer CEO Albert Bourla said in a statement.
“We look forward to sharing additional efficacy and safety data generated from thousands of participants in the coming weeks.”

The company's final goal is to reach 164 confirmed cases of coronavirus infection.

In a press release, the pharmaceutical giant said it plans to seek emergency use authorization from the US Food and Drug Administration (FDA) soon after volunteers have been monitored for two months after getting their second dose of vaccine, as requested by the FDA.

Pfizer said it anticipated reaching that point by the third week of November. Its vaccine trial is conducted in partnership with German company BioNTech.

The Phase 3 vaccine trial has enrolled 43,538 participants since July 27. As of Sunday, 38,955 of the volunteers have received a second dose of the vaccine. The company says 42% of international trial sites and 30% of US trial sites involve volunteers of racially and ethnically diverse backgrounds.

The US FDA has said it would expect at least 50% efficacy from any coronavirus vaccine.

In Hungary, the government has proposed a series of tougher lockdown measures, in an effort to curb the spread of cases.

“If coronavirus infections rise at the current pace, our doctors, nurses and hospitals will not be able to cope with the burden,” Prime Minister Viktor Orban announced Monday on Facebook.

The new measures -- which will come into force as of midnight on Tuesday, pending parliamentary approval -- will include the closure of restaurants, universities and leisure facilities.

A curfew will also be imposed on all citizens from 8 p.m. to 5 a.m. local time, unless they are considered exempt for work.

In Italy, where a nationwide curfew is already in place, the association of doctors has called for a national lockdown.

"Drastic measures are needed, such as a total lockdown," association president Filippo Anelli said Sunday, warning that Italy risks having 10,000 more deaths in a month's time.

Meanwhile in France, a second nationwide lockdown has resulted in the country’s economic activity being 12% lower than normal in November, the governor of the Banque de France said Monday.

“This second lockdown has had a negative impact. We estimate that it is 12% (of GDP) lower than normal. But that's almost three times less than the first lockdown,” Banque de France Governor Francois Villeroy de Galhau said on RTL radio Monday.

The governor added that he expects economic activity will be down between 9% and 10% in 2020.

Under the second national lockdown non-essential businesses in France such as bars and restaurants are closed.

“The United States of America and Germany, as part of the European Union, must stand together to master the major challenges of our time,” Merkel said on Monday in Berlin, vowing to work with the US to fight the pandemic.
“Side by side in the difficult trials of the Coronavirus pandemic, side by side in the battle against climate change and its global ramifications and in the battle against terrorism, side by side for an open global economy and free trade, because those are the foundations of our welfare on both sides of the Atlantic," she said.

And in Russia, the coronavirus response center said Monday that 21,798 new cases of coronavirus had been reported in 24 hours. That total is Russia's highest daily tally since the pandemic began.

Iran has once again marked a record high day of Covid-19 cases, reporting 10,463 infections on Monday according to the country's Health Ministry.

Iran recorded 458 deaths on Monday, bringing the total death toll to 38,749, according to governmental statistics.

On Sunday, the country recorded 459 deaths, the highest tally since the outbreak began in February.

Iran is the worst hit country in the Middle East with a total number of 692,949 cases.

Iran's Supreme Leader Ayatollah Ali Khamenei said last month that the country was suffering through a third wave of the pandemic.

At least 237,570 people have died in the US from coronavirus, according to data from Johns Hopkins University (JHU.)

The US is nearing a landmark tally of 10 million reported cases.

At least 9,968,155 cases have been reported so far -- the highest tally worldwide according to JHU.

On Saturday, the country marked yet another record high of infections -- 128,412​ cases (the highest day total since the pandemic began).

CNN is tracking the spread of Covid-19 across the US here:

Even with President Donald Trump still refusing to concede the election, President-elect Joe Biden is launching an aggressive plan today to control the pandemic that is escalating at an alarming rate and will define his administration as soon as he takes office.

Biden's announcement of a coronavirus task force is an acknowledgment of record new infection numbers in recent days that mean that the Covid-19 crisis will be far worse by the time he reaches the Oval Office in January. The initiative is a forceful statement of intent and makes clear that Biden will use an active transition period to mobilise against the staggering health and economic challenges he will face. And it indicates that he is already moving ahead with the business of assuming power after celebrating the achievement of his three-decades long quest for the presidency on Saturday.

Biden's steps to set the tone of his administration come despite the unprecedented spectacle of a President who has lost the election declining to accept reality. Sources tell CNN that Trump campaign aides are considering their own aggressive strategy  -- not to finally tackle the virus that has killed more than 237,000 Americans -- but for the US President to possibly hold rallies to bolster his false claims that his second term has been stolen. 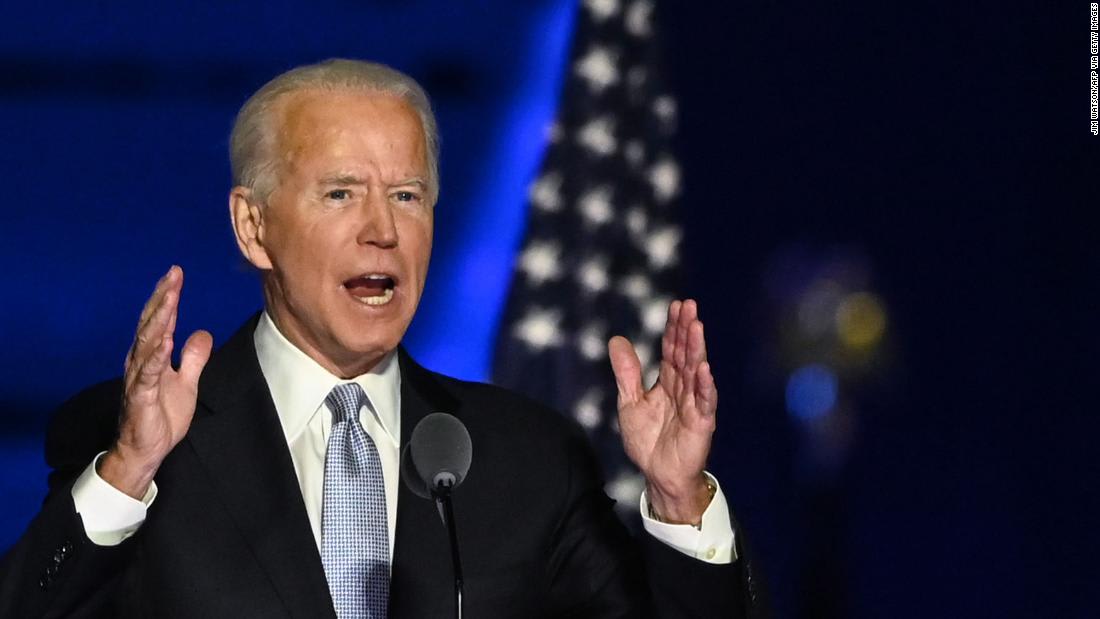 Analysis: Trump in denial over election defeat as Biden gears up to fight Covid

President-elect Joe Biden and Vice President-elect Kamala Harris have unveiled the group of public health experts that will make up their coronavirus advisory board.

The team is chaired by former Surgeon General Vivek Murthy, who served in the Obama administration and also includes Rick Bright, a whistleblower from the Trump administration who alleged that his early warnings about the pandemic were ignored.

Bright was the former director of the office involved in developing a coronavirus vaccine. He said his early warnings about critical supplies shortages were met with skepticism from Trump administration officials.

The inclusion of Bright on the board signals Biden's attempt to take the US' Covid-19 strategy in a different direction to President Trump who has regularly downplayed the impact of the virus.

"The task ahead of the Biden-Harris administration is unlike any other in our history," the Bien-Harris transition team tweeted on Sunday.
"Our transition will be led by experts, by science, and with character—ensuring that we will be ready to lead on Day One."

Both Biden and Harris will receive a briefing from the advisory board on Monday afternoon.

The announcement comes as the US nears 10 million reported coronavirus cases. 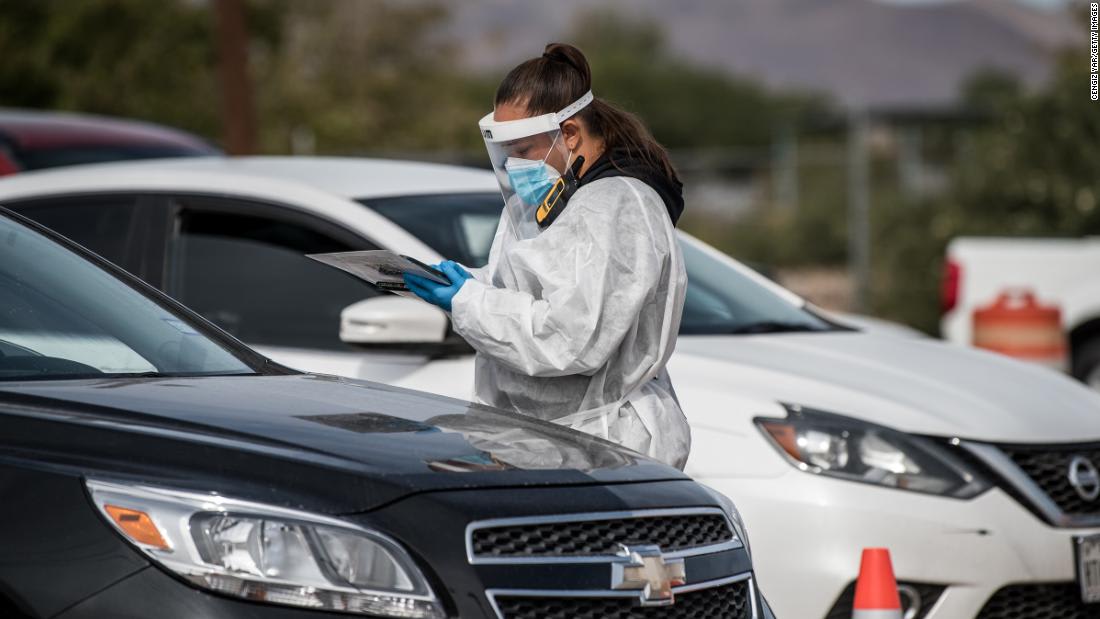