Vermont is enacting a 14-day quarantine for all non-essential travelers entering the northeastern US state in order to slow the spread of Covid-19, the Vermont Department of Health said in a statement.

While Vermont continues to have the lowest positivity rate in the country, cases rose 46% this week, the release said.

Under the new guidelines which begin today, anyone traveling or returning to Vermont must quarantine for 14 days (or 7 days followed by a negative Covid-19 test). Essential travel -- including for school, work, personal safety, medical care, care of others, parental shared custody or for food, beverage or medicine -- is exempt.

Vermont authorities reported 46 new cases of Covid-19 on Tuesday. Authorities have identified 2,462 cases in the state since the pandemic began.

The state of Texas reported 10,865 Covid-19 cases on Tuesday, a new single-day record for the Lone Star state. Authorities there have now identified 974,230 novel coronavirus cases since the pandemic began.

Some 94 virus-related deaths were reported Tuesday, bringing the state's death toll to 18,863.

According to the state's Covid-19 dashboard, there are currently 6,170 lab-confirmed coronavirus patients in Texas hospitals.

Oregon Governor Kate Brown has said she is pausing reopening plans with the state “headed on the wrong road” and running out of hospital capacity.

“Our fears that this virus would spread out of control when the colder months set in are certainly becoming a frightening reality,” Brown said at a news conference Tuesday.

Brown said she was ordering a “two-week pause” in four more counties where community transmission is on the rise, with nine now under additional restrictions. Restaurants and indoor events are reduced to a maximum of 50 people and businesses are encouraged to mandate working from home, according to a statement Monday.

Oregon is headed on the wrong road,” Brown said Tuesday, emphasizing that the state is running out of hospital space.

Dr. Dana Hargunani, Oregon Health Authority’s chief medical officer, said at the news conference that the state has 146 available intensive care beds -- just 20% of its total ICU capacity, according to its Covid-19 dashboard. Hargunani also noted that they only have 701 regular, adult beds available -- 15.6% of the state’s overall capacity.

“While we have plans in place to share beds and ventilators if necessary, that needs to be a last resort,” Brown said Tuesday.

“We cannot and should not be relying on the fact that our hospital systems can withstand a surge.”

“I need Oregonians to know it's not too late to do the right thing,” Brown said as she urged residents to wear masks and stay home when feeling sick.

More than 200 Covid-19 cases have now been linked to a church in Charlotte, North Carolina, according to Mecklenburg County Public Health.

The county has identified 208 cases among attendees and close contacts associated with events held at United House of Prayer facilities in Mecklenburg County from October 4-11.

Severe cases: At least 11 patients were hospitalized, and there have been 9 deaths, with one additional death under investigation.

According to its latest update, Mecklenburg County Public Health has attempted to contact at least 294 close contacts of confirmed cases.

CNN is reaching out to the church for comment.

Philadelphia reported its highest single-day count of new coronavirus cases, with 879 infections, bringing the total to 49,775 since the beginning of the pandemic, according to Health Commissioner Dr. Thomas Farley.

Last week, the US city averaged 515 cases per day, higher than the peak in April. There was a 9.3% positivity rate, a fourfold increase since September, Farley said at a news conference Tuesday.

There are 386 patients currently hospitalized, up from 90 in September and 196 in October. There were 12 new deaths, bringing Philadelphia’s total to 1,901, Farley said.

There’s no question, we are in a dangerous period in the coronavirus epidemic,” Farley said.

Farley said that new restrictions were under consideration. He noted that much of the spreading occurs in private settings, and urged residents to limit gatherings.

Farley addressed the large election-related gatherings in Philadelphia over the weekend and recommended that anyone who was in a crowd of people, indoors or outdoors, wearing a mask or not and within six feet of others to quarantine for 14 days and get tested seven days after potential exposure.

“We know there were a number of people celebrating or otherwise gathering around the election time, outdoors and perhaps indoors as well, and we do worry about the spread of this infection whenever people gather for any reason,” said Farley.

He said that the city had reached its testing goal of 5,000 people per day, and the next initiative is to expand rapid testing to get results faster using Abbott rapid testing cards.

Chicago has updated its Executive Travel Order to a new color-coded tiered system, effective from 12:01 a.m. on Friday.

“As of today, Chicago's travel order includes 43 states and Puerto Rico. But we are introducing a new tiered risk level,” Dr. Allison Arwady, Commissioner of the Chicago Department of Public Health, said in a news conference Tuesday afternoon.

Arwady said states will be designated red, orange or yellow, signifying the level of concern with travel both to and from those areas.

The advice is to avoid travel to states coded red. Anyone coming in from those states is required to quarantine for 14 days. Orange states are also a significant concern and the advice is to avoid traveling to them, Arwady said. Those traveling from orange states will need to quarantine for 14 days or have a negative test result no more than 72 hours before arrival. Travel from yellow states does not require quarantine but Chicago is “recommending avoiding non-essential travel.”

The goal of this travel order is to protect Chicago," Arwady said on Tuesday.

The average number of new Chicago cases per day is at 1,686 and the positivity rate in the city is 13%. “One month ago, we were adding 426 cases per day,” she said. “One month later we're at more than four times that.”

The list will be updated every two weeks based on state and Chicago case averages. Thirteen states are currently red, and 32 states and Puerto Rico are orange.

San Diego and 10 other California counties were forced to move back into more restrictive tiers of the state’s coronavirus reopening system Tuesday as rates of infection continue to increase statewide, Health Secretary Mark Ghaly has announced.

Sacramento, San Diego and Stanislaus are moving back into the most restrictive, purple tier -- which requires the closure of many non-essential indoor businesses -- joining counties including Los Angeles, San Bernardino, Riverside, Monterey and Sonoma.

“If things stay the way they are, between this week and next week, over half of California's counties will have moved into a more restrictive tier,” Ghaly said. “That is certainly an indication that we're concerned and that we have to keep a close watch on what's happening.”

Amador, Contra Costa, El Dorado, Placer and Santa Cruz are moving into the second-most restrictive red tier, which indicates substantial spread of infection. Counties in rural parts of the state, including Modoc, Siskiyou, and Trinity, are moving backward to the orange tier, which shows a moderate infection rate.

California’s reopening system: There are four tiers based on metrics including case rate and test positivity. Before moving forward, counties must remain in a tier for at least three weeks and must meet the next tier's criteria for two consecutive weeks.

“I implore all Californians to sort of look in the mirror and ask what you can do differently,” Ghaly said. “How much more can you keep your mask on? How much more can you work within your own communities or your own family members to plan events in a lower risk? Each of those efforts makes a difference.”

California's seven-day average of new cases is 6,078, according to state data. The 14-day test positivity rate stands at 3.7%.

New Jersey is facing a “grave situation” along with most US states, said Governor Philip Murphy on Tuesday as the state introduced new restrictions aimed at reducing the spread of the virus.

The state reported 3,877 new Covid-19 cases and 21 additional deaths, according to its data dashboard.

“This is a grave situation as it is probably right now in most American states,” Murphy said during an interview on WKYW radio Tuesday. “New Jersey paid an enormous price early on and we were able to battle through that, but we are clearly not out of the woods.”

The new policies, which go into effect Thursday, include:

Murphy said the tendency of restaurants to turn into de facto clubs at night was thought to be fueling the state's Covid-19 resurgence.

Newark Mayor Ras Baraka signed an executive order on Tuesday enacting additional measures, including a curfew in “hot zones,” to contain the spread of Covid-19 in the city, according to a news release.

“Newark’s test positivity rate is at 19%, while New Jersey’s is at 7.74% -- more than double," said Baraka in a statement. “Stricter measures are required in the city’s hotspots in order to contain the virus and limit the spread. I know we are all tired, but the virus is not, therefore we must remain vigilant and do what is necessary to get this under control and save lives.”

The new measures, effective immediately, include:

Two weeks ago, the city imposed restrictions such as requiring non-essential businesses to close at 8 p.m. and salons to be open by appointment only as cases continued to climb.

Former Centers for Disease Control and Prevention (CDC) acting director Dr. Richard Besser said Tuesday that he was optimistic that the pandemic response will soon be under new federal leadership, noting that in the meantime, states need to step up.

President-elect Joe Biden has named a new coronavirus advisory board to help with the pandemic response as he transitions into the presidency.

Besser said he was optimistic knowing “that politics will follow public health, instead of public health being told to change their recommendations to suit politics.”

“I really see their role being this bridge during this period, so that following inauguration, CDC, FDA [Food and Drug Administration], NIH [National Institutes of Health] can be back in their roles of leading this and driving this and being supported by politics,” he said during an interview hosted by the nonprofit Aspen Institute.

Besser, who heads the health-focused Robert Wood Johnson Foundation, said he was glad to see that those appointed to the advisory board are prioritizing equity.

“To hear the Vice President-elect talking about the importance of equity, not being something on the side, but being central to how you think about this response -- to me, that's huge,” he said.

Besser said that the challenge will be getting through a difficult winter with the coronavirus response still led by the Trump administration.

“I hope that governors now of both red and blue states step up, mandate masks, look to see what they can do within their own states, recognizing that the federal response and unified federal response is still several months away,” he said. “There are tens of thousands of lives that could be saved if states drive this forward and do the right thing.” 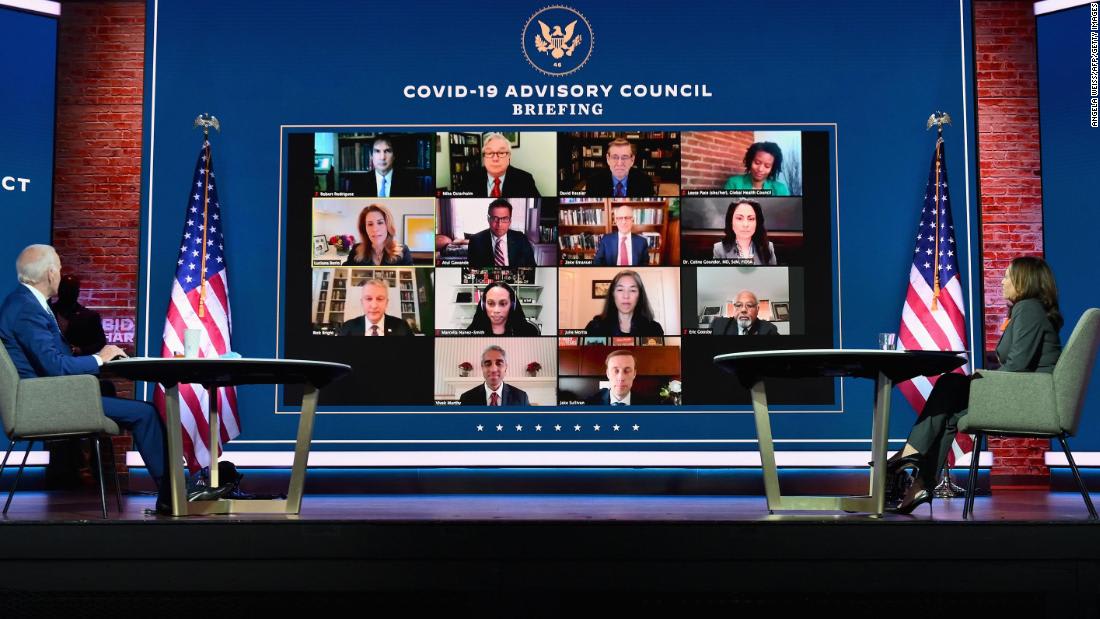