Frontline workers in El Paso, Texas told reporters Friday that a court decision to stop a city shutdown order was "a disaster for our health system, which is in near collapse."

"This order is especially a disaster for our health system, which is in near collapse here in El Paso, from the calamity just ripping through our facilities every day," Juan Anchondo, a nurse at Las Palmas Medical Center, said on a Zoom call.

More patients are dying every day and we aren't able to keep up. Our lives and our families are in jeopardy," he said.

The call, which was hosted by National Nurses United, included three nurses and an El Paso City Representative.

Ariana Lucio, an RN at Del Sol Medical Center who works on the Covid-19 unit, said she was "disappointed" and "concerned" Samaniego's order was struck down as the surge in El Paso has already "taken a very emotional and physical toll on the nurses and doctors."

"I wanted to express the importance of our voices to be heard as the Hispanic community because we are being affected here. We are the epicenter of what is going on," Cooper said.

Cooper said she felt the court's preliminary injunction would "have dire consequences for my community or for communities of color."

Anchondo spoke of an increasing problem of ventilator shortages where nurses were put in the "unthinkable situation of needing to urge a family to approve withdrawal of care" because a ventilator was needed for another patient who had a better chance of survival.

A county commissioner told CNN Friday that the court’s ruling was a preliminary injunction of the order and it is expected to rule Friday whether or not to invalidate the order completely or send it back to a lower court to undergo a trial. According to this official, the county will weigh their legal options once the decision is handed down.

El Paso passed the grim milestone of 70,000 cases Friday, with 70,575 total infections and a seven-day positivity rate of 20.50%, according to the city's Covid-19 dashboard. Texas on Wednesday became the first state to report more than 1 million cases.

In a sobering news conference on Friday, the St. Louis Metropolitan Pandemic Task Force said if the Covid-19 hospitalization trajectory continues the path it is on right now, the region will run out of ICU capacity in the first week of December.

Dr. Alex Garza said there were “no safe harbors anymore" and hospitals were "just running out of capacity."

"Patients are coming from all over. Our hospitals are filling up, or are filled. We're having to turn away transfers… We’re getting requests from far, far away to transfer patients to the St. Louis area," he said.

“We are also asking the state to work with our systems emergency managers to start planning for what will happen when the healthcare systems become overwhelmed,” he said.

“But, we have no reserves. We have no backup, that we can suddenly muster to come in and save the day,” he said. “If we stay on the path that we're on even just two more weeks, we will not have the staff we need to care for patients. It's now just a numbers game.”

He said the number of people with Covid-19 was "skyrocketing in our region" and the number needing hospitalization "is nearly three times what we described as a sustainable level.”

The real peak of this pandemic has yet to come,” he warned.

Garza said the Task Force is calling for stricter policies including a statewide mask mandate “to save lives across the city.”

Italian authorities have reported more than 40,000 new Covid-19 infections in the past 24 hours, the largest daily increase since the pandemic started.

There were 40,902 new cases on Friday, data from the Italian Health Ministry showed. The total number of infections in Italy is now at 1,107,303.

Authorities also reported 550 additional deaths from the coronavirus, with the total death toll from the virus rising to 44,139.

The record in daily infections comes despite the infection rate having decreased slightly, according to the head of the prevention department at the Italian Health ministry, Gianni Rezza. It is the “first sign of the decrease in transmission that could be attributed to the (containment) measures that have been taken,” he said.

Hospital admissions rise: Rezza said the rising number of people being admitted to hospitals justified “further restrictive measures that need to be taken in those regions that have a higher risk.” An additional 60 patients were admitted to intensive care units across the country, prompting the government to add several regions to its “red zone” list, including Campania and Tuscany. The two regions will see increased anti-coronavirus restrictions come into effect on Sunday.��

In Campania, the Mayor of Naples Luigi Deagistris pre-empted the government announcement and called for help.

“We now require immediate economic help from the government,” he said. As he spoke, anti-lockdown protesters could be seen taking to the streets of Naples.

The regions of Emilia-Romagna, Friuli Venezia Giulia and Marche, were also moved up in the risk category, going from yellow into orange. Italy now has six regions classified as red zones, nine as orange and five as yellow zones.

Louisiana Governor John Bel Edwards announced on Friday that he will be releasing some of the highest coronavirus positive numbers the state has seen in quite some time.

Edwards blamed the recent surge in cases in large part on the lack of mitigation efforts during the Halloween holiday.

For the immediate future, it's going to get really, really tough for the people of Louisiana," Edwards said during a news conference on Friday.

The Louisiana Department of Health is expected to release the most up to date numbers this afternoon.

In an interview with Ireland’s RTE Radio 1 on Friday, Martin added that the exit plan is still being worked on by the government.

No definitive decision has yet been made on the hospitality sector operating over the Christmas period and the government plans to give an update on that before the end of November.

“Our sense and my sense from the research we're doing from the public data is that it's not going to be same Christmas as last year, but it is going to be a good Christmas and a meaningful one,” Martin said.

He said that the government would issue advice on international travel during the holiday period towards the end of the month.

As bars, gyms, and restaurants prepare for the first night with a 10pm state-mandated curfew, New York City Mayor Bill de Blasio said that the closure of these establishments needs to be “reassessed.”

“Even though the state makes the ultimate decisions here on the industry issues, I’m very cognizant of the fact that we have to keep people’s livelihoods in mind here,” the mayor said Friday morning on WNYC’s The Brian Lehrer Show.

“The question is really how we balance the bigger factor,” said the mayor. "I don’t want people to think that [closing] indoor dining and gyms are the magical solution to all of our problems because, in fact, our test-and-trace operation is not showing, you know, the kind of impact from those locales that you have seen in other places around the country; we have something much more generalized here.”

Instead, the mayor suggested that holiday travel will be much more impactful in determining the future of governmental response to the coronavirus. “We talk about restaurants or gyms, but much more decisive will be if we can successfully limit travel and limit indoor gatherings” during the upcoming holiday season."

Passengers who tested negative for Covid-19 aboard a cruise ship in Barbados will be able to leave the ship and travel home, two passengers told CNN Friday.

A total of seven SeaDream 1 passengers have tested positive for coronavirus as of Friday morning, according to passengers Gene Sloan and Ben Hewitt.

Hewitt said the crew informed passengers that everyone who had tested negative twice would be allowed to disembark the ship and fly home Saturday.

The background: The SeaDream Yacht Club cruise was the first to return to the Caribbean and was meant to demonstrate that increased safety protocols, including regular testing aboard the ship, could allow cruise voyages to take place during the pandemic.

After one passenger fell ill on Wednesday, the SeaDream 1 was forced to return to Barbados and 53 passengers and 66 crew were tested. 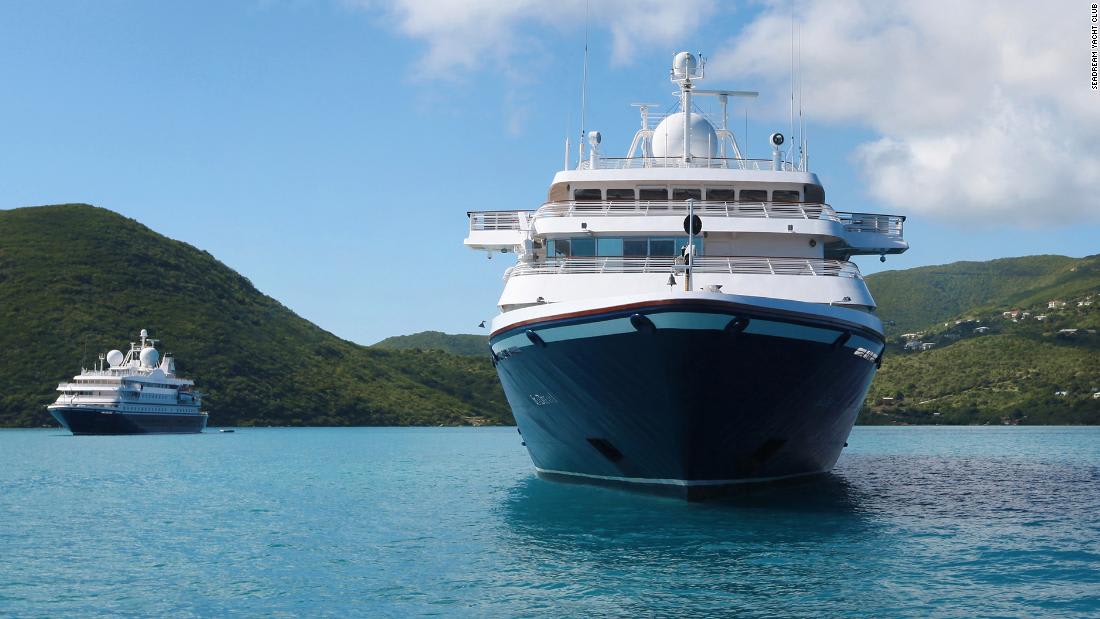 Several dozen US Secret Service officers are either self-isolating after contracting coronavirus or are self-quarantining after coming into contact with someone who tested positive, a source familiar with the matter tells CNN.

Even USSS officers are unsure of the numbers because they aren't being told an exact number by their superiors, this person said.

A separate Secret Service source told CNN that he has heard nothing internally about officers testing positive or self-quarantining.

No numbers. No emails. No conversations during briefs. Nothing," this person said.

Citing privacy and operational security concerns, a Secret Service spokesperson told CNN that the service will not release how many of its employees have tested positive for coronavirus or how many are, or have been, quarantined.

"The Secret Service maintains well-established protocols inclusive of testing, conducting contact tracing related to confirmed and suspected exposure, and immediately isolating of any employee who tests positive for COVID-19," the spokesperson told CNN. "This program ensures that every precaution is taken to keep our protectees, employees, families, and the general public, safe and healthy."

There are approximately 7,600 USSS employees, about 1,600 of whom serve as uniformed division officers.

All employees who worked on the campaign trail are being tested, an official with knowledge of the matter said.

“The USSS is taking all necessary precautions and putting anyone who is considered close contact in quarantine,” the official said, adding, “There has been zero impact on the mission. Staffing levels are high enough to manage.”

The Egyptian Football Association announced via Twitter on Friday that soccer star Mohamed Salah has tested positive for coronavirus while away on international duty with his country.

It comes on the eve of Egypt's Africa Cup of Nations qualifier against Togo on Saturday.

According to the Egyptian FA, the star forward is said to be symptom free, while the rest of his Egyptian teammates returned negative tests.

More sport: The NFL’s Cleveland Browns announced Friday that one of the team’s players has tested positive for Covid-19. The unnamed player began immediately to self-isolate, and the Browns’ facility was closed Friday morning while contact tracing was being conducted.

The team says it will continue to hold meetings remotely and consult with league and medical experts on the next steps, in accordance with the NFL-NFLPA intensive Covid-19 protocol.

Cleveland is scheduled to host the Houston Texans Sunday afternoon. Last week, the Texans announced one of their players tested positive for Covid-19 and shut down the team facility for the day.

This post has been updated to reflect that the date of Liverpool's next Premier League match has been changed.