The United States reported 184,514 new Covid-19 cases and 1,431 deaths on Friday, according to Johns Hopkins University.

This is the highest number of cases reported in a single day in the country since the pandemic began, and continues a four-day streak of record-breaking totals.

Here are the worst days in the US so far:

November already was crippling for American communities battling Covid-19 spikes in cases, hospitalizations and deaths. Experts warn it will likely get worse before it gets better -- the US currently has more people hospitalized with Covid-19 than ever before, according to the Covid Tracking Project (CTP).

Read more on the Covid-19 situation in the US: 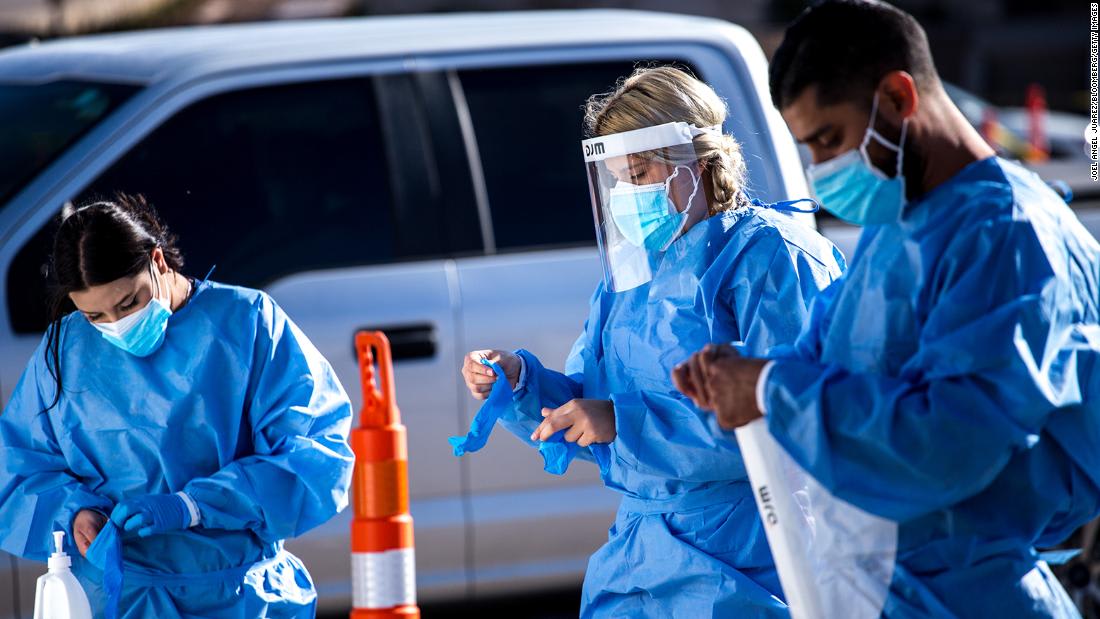 The US reported more than 153,000 new coronavirus infections and the surge is only accelerating

The United States has more people hospitalized with Covid-19 than ever before, according to the Covid Tracking Project (CTP).

Surviving Covid-19 is hard enough for those who get severely ill from the disease, but returning to normal is a struggle, too, according to new research.

It found that survivors were likely to face health and financial hardships even months later.

A team of scientists led by Dr. Vineet Chopra of the University of Michigan Health System looked at 488 Covid-19 patients treated and released from hospitals in Michigan. They surveyed them about two months after their release, between March 16 and July 1.

Health impact: A third of the survivors reported ongoing health issues, such as a cough, new or worsening conditions and persistent loss of taste or smell, the researchers reported in the journal Annals of Internal Medicine.

Emotional impact: Nearly half said they were “emotionally affected” by their illness and a small number, 28, sought mental health care after discharge.

Financial impact: Another 36% reported “at least a mild financial impact from their hospitalization.” Of those employed before their illness, 40% said they either lost their job or were too sick to return to work. Just over a quarter of those who returned to work reported reduced hours or modified responsibilities.

“For most patients who survived, ongoing morbidity, including the inability to return to normal activities, physical and emotional symptoms, and financial loss, was common,” Chopra’s team wrote.
“These data confirm that the toll of Covid-19 extends well beyond hospitalization,” the study concluded.

The study had limitations. The survey only covered 488 out of more than 1,600 patients whose records were originally tracked. A third of those 1,600 patients died, the researchers reported.

Coronavirus cases have grown exponentially across the United States just in the past week and it was necessary that "we need to mask up the entire country now,” Dr. Jonathan Reiner, CNN medical analyst, said Friday.

“The move should be a national mask mandate,” Reiner, who is a professor of medicine at George Washington University, told CNN’s Erin Burnett. “The President should be on the phone with every governor tonight doing that.”

While some have argued that it is their right to choose not to wear a mask, Reiner said, there is a fine line between a libertarian ethic and selfishness.

When your breath leaves your mouth and it becomes air -- to paraphrase a beautiful book -- it is no longer your choice to spew virus into my face,” Reiner said.

Reiner cited Vice President Mike Pence’s recent comments that help is on the way to the American people, in the form of a vaccine.

“Help is not on the way. A vaccine will take a couple of months to really make an impact,” he said. “If you're having a heart attack and you call 911 and I tell you that the ambulance is coming two months from now, that should offer you no comfort.”

No vaccine has received Food and Drug Administration authorization, and experts agree approval would take several weeks to come through from the time a company applied for it.

But studies show more universal mask use would cut the infection rate greatly.

“What people need is a mask mandate, and they need it now,” Reiner said.

Slaoui touted the progress of several vaccines and therapeutics, including Pfizer’s and Moderna’s vaccines, which he said expect to file for emergency use authorization within the next few weeks.

“It is important to note that this progress has been achieved without any political interference -- I said it many times -- and at every step has been and is being judged by independent expert bodies,” Slaoui said.

“It's not the companies; it's not Operation Warp Speed; it's not the US government,” Slaoui said. “It is independent experts that assess the safety and the efficacy of the vaccines that are being tested.”

Pfizer and Moderna will likely seek emergency use authorization from the US Food and Drug Administration for their coronavirus vaccines within the next few weeks, Moncef Slaoui, chief adviser to Operation Warp Speed, said Friday at a White House briefing.

If approved, vaccinations could begin in December, he said.

Pfizer said Monday that its coronavirus vaccine appears to be more than 90% effective, based on early data. Slaoui called the announcement “thrilling,” adding that it demonstrated that “vaccination is possible against Covid-19.”

Moderna announced this week it had enough coronavirus cases among its trial participants to complete its first interim analysis.

“I would expect that shortly, probably next week, we may hear what I hope to be another very good information regarding an efficacious vaccine,” Slaoui said.
“We plan to have enough vaccine doses available for use in the US population to immunize about 20 million individuals in the month of December, and another 25 to 30 million per month on an ongoing basis from there on,” he said.

Slaoui added that if other vaccines are approved, the number of vaccinations per month could increase.

Many states are enforcing drastic restrictions as a surge of coronavirus infections and hospitalizations see the pressure mount.

The Illinois Department of Public Health Friday reported a staggering 15,415 new cases of Covid-19, shattering previous daily case counts. There are also 5,362 people in the hospital, the highest number on record, according to an IDPH news release, with 27 new deaths.

There have been over half a million cases of Covid-19 in the state and more than 10,000 people have died so far, according to the statement. Illinois is currently running a 14.5% seven-day positivity rate.

He said that bars and clubs must close by 10 p.m., and restaurants can only do takeout after 10 p.m. All youth recreational sports will be banned for the time being.

Scott said while there will be no enforcement of the ban on multi-household gatherings, he hopes that residents will abide by an honor system. He said that many outbreaks are being traced back to gatherings like parties or Halloween celebrations. The gathering ban will not apply to religious services, he said.

The restrictions come as the governor announced an additional 84 new Covid-19 cases yesterday, which compares to an average of 25 cases per day last week.

Arkansas Gov. Asa Hutchinson announced on Friday the creation of a Winter Covid-19 Task Force as the state recorded a record 2,312 cases in 24 hours.

Hutchinson said at a news conference that this was because the winter months are expected to pose particular challenges for the state.

He said the state is also seeing a record surge of hospitalizations, at 826.

The governor said 905 people were hospitalized with Covid-19, which is over 20% of the state’s hospital capacity. ICU capacity is at 27% and ventilator capacity is at 70%. “This is a very serious situation for our hospitals,” said Ricketts.

The new restrictions including limiting elective surgeries, six feet of separation in gyms, bars and restaurants and a mask requirement for close contact businesses. Ricketts said he chose not to mandate masks because, “I am in favor of educating people."

The new cases show an increase in all regions of the state as well as all age groups, another tweet said.

The largest increase of cases are in those ages 18 to 29, a 25% increase, and those living in the Acadiana region, a 21% increase, the tweet said.

New York Gov. Andrew Cuomo announced during a news conference that he and six other northeast governors will have an emergency summit this weekend to discuss potential new Covid-19 restrictions.

“We believe we are going to have to take additional steps and the extent we can share information and align action, we will do that," Cuomo said.

Cuomo used the rules for flying into New York state and the requirement to show a negative test as an example of what could be discussed at the meeting.

Track the spread of the virus in the US:

Any eventual coronavirus vaccine will be distributed across US states and territories based on population, a top Operation Warp Speed official said Friday.

“Vaccines will be allocated pro rata by population," Gen. Gustave Perna said at a news conference led by US President Donald Trump in the White House Rose Garden.

Pfizer is expected to apply for emergency use authorization (EUA) from the US Food and Drug Administration before the end of the month.

“Today, we expect to have tens of millions of doses immediately following EUA, and we will distribute them as soon as the FDA applies the EUA,” Perna said. “We are harnessing the strength of commercial industry and existing vaccine delivery capabilities and infrastructures.”

State health officials have said they have not heard many details from the federal government about how the vaccine distribution will be organized, and they have not received the funding they need to get infrastructure in place.

At the end of the day, our success is going to be judged by the availability of the vaccine as the shots go into arms,” Perna said.

“We are working closely, along with the CDC, the 64 jurisdictions and states, to ensure the vaccine can safely and quickly get to those who need it first. And then we have plans to ensure that it spreads exponentially across our country and that no place is left without a vaccine."

No one at the news conference addressed January's transition could affect distribution.

Pfizer and Moderna will likely seek EUA from the US Food and Drug Administration for their vaccines within the next few weeks and vaccinations could begin in December, Moncef Slaoui, chief adviser to Operation Warp Speed, said at the briefing.

Pfizer says its vaccine is more than 90% effective, based on early data. Moderna announced this week it had enough coronavirus cases among trial participants to complete its first interim analysis, and Slaoui said that “probably next week we may hear what I hope to be another very good information regarding an efficacious vaccine."

“We plan to have enough vaccine doses available for use in the US population to immunize about 20 million individuals in the month of December, and another 25 to 30 million per month on an ongoing basis from there on,” he said.

Slaoui added that if other vaccines are approved, the number of vaccinations per month could increase.

Covid-19 hospital and intensive care unit admissions in France decreased sharply on Friday, according to the country's health agency.

The French Health Agency reported that the number of patients in hospital for coronavirus only increased by 22 between Thursday and Friday. There was an increase of 736 hospital patients the day before.

The ministry reported that only three additional ICU beds were taken up by coronavirus patients on Friday. The increase was 95 on Thursday, and has been averaging around 100 per day for several weeks.

France entered its second lockdown two weeks ago on Thursday.