The United States reported 187,833 new Covid-19 cases on Thursday, according to Johns Hopkins University, the highest one-day total since the pandemic began.

Background: The US is seeing the fastest spread yet of the coronavirus, the White House Coronavirus Task Force said in its first public briefing in four months on Thursday. Earlier Thursday, the Centers for Disease Control and Prevention asked Americans not to travel for Thanksgiving. But other members of the task force said they would not support a nationwide lockdown.

Read more about the virus' spread in the US: 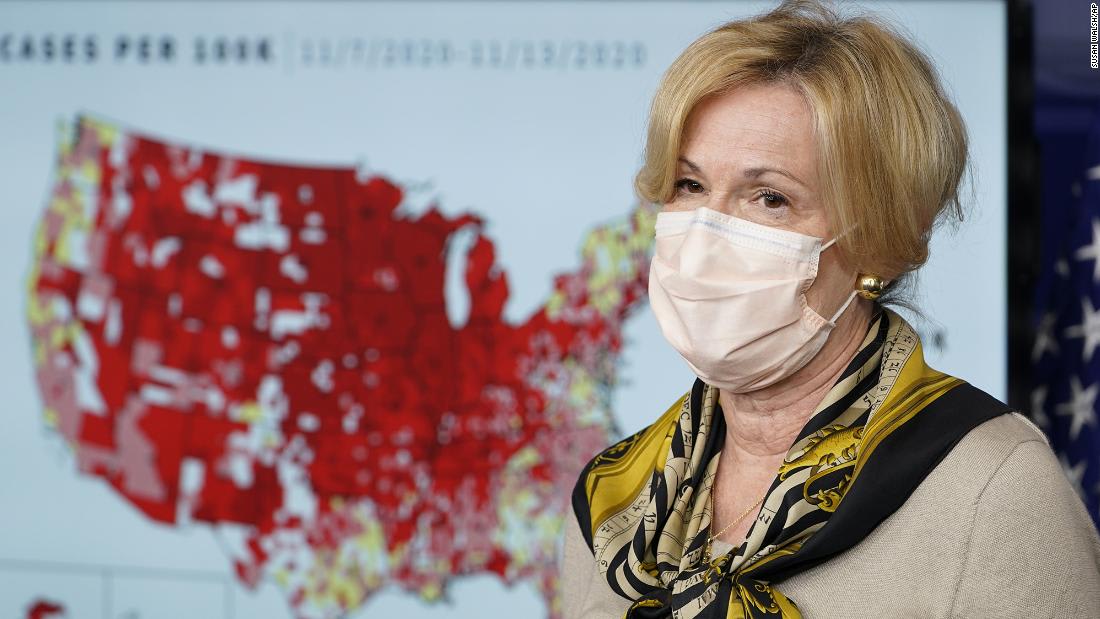 The US Centers for Disease Control and Prevention knows how to get people vaccinated, Dr. Anthony Fauci, the director of the National Institute of Allergy and Infectious Diseases, said Thursday.

The infectious diseases expert said he’s confident that the agency can get Americans vaccinated once a Covid-19 vaccine becomes available, even if the presidential transition of power hasn’t started.

“So, the idea that this is the first time it's being done, the first time you're going to get 300 million, but this is a situation where the CDC does this every year,” he said.

Fauci, who has been part of five transitions of presidential power over his 36 years as a federal scientist, wouldn’t talk directly about President Donald Trump’s refusal to concede the election to President-elect Joe Biden and whether that would impact potential coronavirus vaccinations.

“Transitions are obviously important,” he said. “You do better with transitions. I've been through them and I know.”

“Of course, that's better than not doing it that way.”

India reached 9 million coronavirus cases Friday after reporting 45,882 new infections in the past 24 hours, according to the Ministry of Health and Family Welfare.

India, which has a population of 1.3 billion, has the second highest number of virus cases in the world, behind the United States.

Despite reaching the bleak milestone, India has seen a steady decline in the number of reported infections over the past few weeks.

It took India 23 days to go from 8 million recorded cases to the 9 million tally. Whereas it took 18 days to reach 7 million and 11 days to top 8 million, according to a CNN tally of figures from the Indian Health Ministry.

More than 129.5 million tests had been conducted in the country as of Thursday, according to the Indian Council of Medical Research.

Cases are surging in the capital: On Thursday Delhi passed 500,000 Covid-19 cases, when it recorded 7,546 new infections.

The Delhi government has reissued restrictions on social gatherings and increased fines for people who leave their homes without wearing a mask.

In a statement Thursday, Delhi Chief Minister Arvind Kejriwal announced that his administration was working to ensure medical infrastructure could cope with the rise in cases.

Dr. Anthony Fauci, the director of the National Institute of Allergy and Infectious Diseases, is confident about the two potential Covid-19 vaccine candidates that could be ready for use by next month.

Both Pfizer and Moderna’s coronavirus vaccines showed a 95% efficacy rate in clinical trials.

“Those numbers are not going to change,” he said. “The issue is how long does the immunity last. How long did protection last? We don't know that right now but we know it works.”

Vaccine maker Pfizer has reported the results from its Phase 3 trial and its partner, Germany’s BioNTech, said the companies will file for Food and Drug Administration emergency use authorization on Friday.

Fauci said it was clear that the vaccine "prevents severe disease and it prevents symptomatic disease. Whether or not it prevents infection we're going to find out."

But he said both did well enough. “I'll take a vaccine that prevents people from getting seriously ill any day of the year,” he said.

As the coronavirus resurgence causes a steep increase in daily deaths and infection rates across the United States, Bill Gates is banking on a coronavirus vaccine to end the pandemic.

“We’ll look back and wish that we had done more before the epidemic hit and done a better job during the epidemic,” Gates, the co-founder of the Bill and Melinda Gates Foundation, told CNN’s Anderson Cooper.

“The only good news is that the private sector innovation is going to come along with better therapeutics and the vaccine,” he said.

Over the next 16 months we need to do the right things and then the vaccine coverage will get us out of the mess,” Gates added.

“In fact, it could have been even worse if the pathogen had been even more fatal.”

South Australia will lift its six-day lockdown on Saturday -- a few days before it originally planned to -- after health authorities found that a person lied to contact tracing officials.

"SA health contact tracers found that one of the close contacts linked to the Woodville Pizza Bar deliberately misled the contact tracing team," South Australia Premier Steven Marshall said at a news conference Friday. "We now know that they lied."

As of midnight Saturday, the stay-at-home order will be repealed, and South Australians will be permitted to exercise outdoors and go back to previous restrictions.

What happened: The person who misled authorities claimed they bought a pizza from the Woodville Pizza Bar, which authorities identified as a potential hotspot earlier this week.

But the person was actually an employee and had been working there for some time, South Australia Police Commissioner Grant Stevens said.

Stevens added that they would not have gone into lockdown had the person told the truth, and authorities are now working to identify and locate another group of the employee's associates.

Officials defend lockdown decision: The premier and police commissioner defended the decision to go into lockdown and said it was the right move at the time based on the information they had. The person who lied will not be fined or penalized, Stevens added.

"This has had a massive impact on our community," Stevens said. "People's lives have been upended as a result of information that lead us to a course of action that now was not warranted in the circumstances. We're now taking action to amend that."

The coronavirus pandemic is getting so bad, so quickly, across the United States that an influential academic modeling group has hiked its forecast of deaths considerably.

The Institute for Health Metrics and Evaluation at the University of Washington School of Medicine now predicts 471,000 people will die from Covid-19 by March 1.

"The pace of increase is faster than we expected, leading us to revise upward our forecast of deaths by March 1 to 471,000," the IHME said in its new report.

The group said their forecast "assumes that 40 states would reimpose social distancing mandates as the daily death rate exceeds 8 per million."

“Hospital systems in most states will be under severe stress during December and January even in our reference scenario. Increasing mask use to 95% can save 65,000 lives by March 1," the institute said.

This increased death forecast is even taking into account that the US has improved the infection-fatality ratio with better treatments.

“Our analysis suggests that after controlling for age, sex, comorbidities, and disease severity at admission, the hospital-fatality rate has declined by about 30% since March/April,” it said. Obesity is a major factor in the fatality rate, it said.

Japan reported its highest number of daily Covid-19 cases for the second consecutive day, with 2,397 infections on Thursday, according to the country's Health Ministry.

There were 21 deaths also reported, the Health Ministry said.

Despite the continued spike, Japan's Chief Cabinet Secretary Katsunobu Kato said imposing a state of emergency is not necessary.

"We are not in the situation to issue the state of emergency now. I understand the medical experts share the view," Kato said at a news conference on Friday.

Kato added that the weekly infection average has doubled in the past two weeks and said the government needs to be at maximum alert.

"We would like to pursue the economic and social activities while taking thorough implementation of basic prevention measures," the secretary said.

The data Pfizer and BioNTech have released so far on their Covid-19 vaccine candidate “are really exciting and give us great hope,” US Food and Drug Administration Commissioner Dr. Stephen Hahn said Thursday.

“It’s the equivalent of a medical home run, maybe a Grand Slam, who knows, but really impressive from what we’ve heard so far,” Hahn told NBC News.

The companies said this week the data from the clinical trials show the potential coronavirus vaccine is 95% effective in preventing disease and that they plan to file for an emergency use authorization from the FDA on Friday.

Hahn said the agency needs to see the raw data on the vaccine.

“So what will be submitted to us is raw data around the clinical trial that would support a claim for safety and effectiveness of the vaccine, which of course is our primary responsibility here, with an emergency use authorization or an outright approval,” he said.

That’s not the only thing the agency reviews.

“We'll also be looking at manufacturing data because the other thing we need to ensure is that every vaccine that comes off the manufacturing line has the same high quality and represents the vaccine that was part of the study,” Hahn noted.

After the FDA receives the application, Hahn said the agency will set a date for a meeting of the Vaccines and Related Biological Products Advisory Committee, or VRBPAC. A source told CNN this week the date had already been set, for December 8, 9 and 10. But Hahn said a date has not yet been set.

Once the application is submitted to the FDA, agency scientists review it and come to their own conclusions, Hahn said.