The US Food and Drug Administration has posted to Twitter more details about an upcoming meeting of its outside advisory committee to discuss Pfizer and BioNTech's emergency use authorization application for a coronavirus vaccine candidate.

The Vaccines and Related Biological Products Advisory Committee will meet on Dec. 10.

"Starting Friday, the public will be able to submit comments to the public docket for this meeting, and those comments will be reviewed by the FDA," the agency tweeted on Wednesday. "Although the VRBPAC members provide advice to the agency, which may include advice on the safety and effectiveness data submitted in the EUA request, final decisions on whether to authorize the vaccine for emergency use are made by the FDA."

In a series of tweets, the FDA also noted that the committee is made up of scientific and public health experts and the committee meeting will be live-streamed on the agency's YouTube, Facebook and Twitter channels and from the FDA website.

The holidays are upon us and one tech company is already in the giving spirit.

Zoom announced earlier this month it will lift its timed meeting limit on Thanksgiving so "your family gatherings don't get cut short."

The video communications company announced in a tweet that the 40-minute time limit it usually has on its free meetings will be lifted globally on Nov. 26 (Thanksgiving Day).

If you're hosting a Zoom Thanksgiving this year, read up here on how to make it a holiday to remember.

New York City Mayor Bill de Blasio, after his repeated call for families to celebrate their Thanksgiving safely, said he was excited for the Macy’s Thanksgiving Day Parade which he said would be, like many other things, much different this year during the pandemic.

And for children, “there will also be a very important visitor from the North Pole at the end of the parade.”

The parade will also honor elements from parades that were cancelled throughout the city earlier this year.

“It’s going to be great also because Macys went to the extent of making sure that some of the other parades that we didn’t get to have this year got some representation so they’ll have some wonderful performances from the west Indian day parade, from the Puerto Rican parade – things we normally look forward to all year – and from the cast of Hamilton. It's going to be something very special," the mayor said.

He thanked Macys for coming up with a safe plan.

Later he thanked those in the education community for their work during the pandemic, as well as food service workers, those in pantry’s and soup kitchens, for their extraordinary help to provide meals to those in need.

The daily number of people admitted to hospitals for Covid-19 is at 141, under the 200 threshold, but still higher than in recent days which de Blasio said is a “concern.”

The confirmed positivity rate for Covid-19 for those patients is 45%.

“Overall our hospitals are doing very, very well but that jump is a concern,” he said. 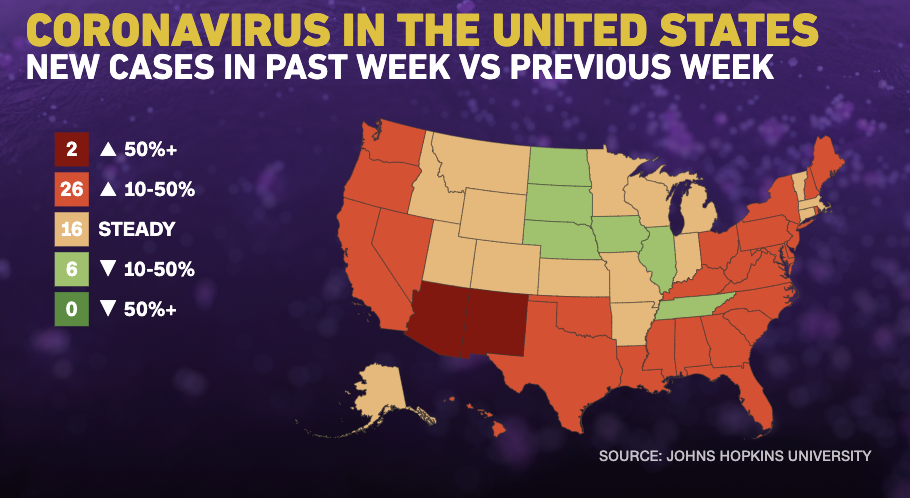 The White House is strongly considering lifting sweeping restrictions on travel from the European Union and the United Kingdom, an administration official confirmed.

Discussions have been ongoing for several weeks about lifting the restrictions, which ban entry to most foreigners who have been to Europe in the two weeks before their arrival in the US. Reuters first reported on the discussions.

An administration official told CNN that the US Centers for Disease Control and Prevention has expressed some reservations about lifting the restrictions, but the agency is not expected to block the move.

The discussions come at a time when the US is experiencing its worst surge of coronavirus, and as many European countries also face higher levels of coronavirus cases.

President Trump has yet to sign off on the move, but once he does, the restrictions are unlikely to be lifted until the US and European countries have established a protocol for safe travel between the two countries.

The White House did not immediately respond to a CNN request for comment. The US Centers for Disease Control and Prevention directed CNN to the White House and the Health and Human Services Department when asked for comment.