The UK government has announced a “significant first step” in getting the AstraZeneca vaccine “approved for deployment.”

On Friday, it formally referred AstraZeneca’s experimental vaccine candidate to the UK’s medicines regulator for assessment. The British-Swedish drugmaker is developing the vaccine in conjunction with the UK's Oxford University.

If it gains regulatory approval, the UK will be one of the first countries in the world to receive it, according to the country's Department of Health and Social Care (DHSC).

AstraZeneca expects to have up to 4 million doses ready for the UK by the end of the year, with 40 million more by the end of March, it added.

The news has arrived at a critical moment for the company, which has been pushing back against criticism about a lack of transparency behind its data.

On Monday, AstraZeneca announced that its vaccine had shown an average efficacy of 70% in large-scale trials.

But some scientists are questioning why the company would report on a pooled result of two different trials, as it deviates from standard reporting on clinical trials.

And in the days following AstraZeneca's announcement, another point of confusion emerged: a lab error was the reason why some volunteers had received a smaller dose.

In a call with reporters on Wednesday, the US vaccine czar Moncef Slaoui said that the group that got the mistakenly lower dose that yielded the 90% efficacy had been a younger group, with no one older than 55.

That could potentially affect the strength of AstraZeneca's findings, given that young people typically produce stronger immune responses to vaccines.

In a statement on Friday, the UK Medicines and Healthcare products Regulatory Agency Chief Executive Dr. June Raine said that the body will “rigorously assess the latest data and evidence to be submitted of the vaccine’s safety, quality and effectiveness.”

“The safety of the public will always come first. Our role is to work to the highest standards and safety is our watch word,” she added.

Related coverage: AstraZeneca hopes the world can focus on its positive vaccine news. But experts fear a lack of transparency has clouded that

US President Donald Trump finally confirmed Thursday that he will vacate the White House in January -- but he largely ignored the mounting challenges his successor is facing as he exits.

In a gaggle with reporters, he continued to push his false narrative that the US is rounding the corner on the pandemic but acknowledged that he will be gone next year, lecturing reporters not to "let Joe Biden take credit" for the development on coronavirus vaccines "because the vaccines were me and I pushed people harder than they've ever been pushed before."

The remarks at once reflected the President's breathtaking narcissism and his inability to confront the anxiety and financial pain that so many Americans are facing this holiday week, as lines at food banks stretched for blocks and hospitals were once again facing down capacity limits.

The inability of leaders to work together in Washington is being sharply felt by small business owners and workers who are once again seeing their livelihoods jeopardized as cities and jurisdictions around the country place new limitations on businesses to try to get a handle on the skyrocketing number of Covid-19 cases.

"We can't keep taking on these blows, especially with no federal relief or aid from anyone else," said restaurateur Tom Sopit in Los Angeles. "This just can't keep going on without help." 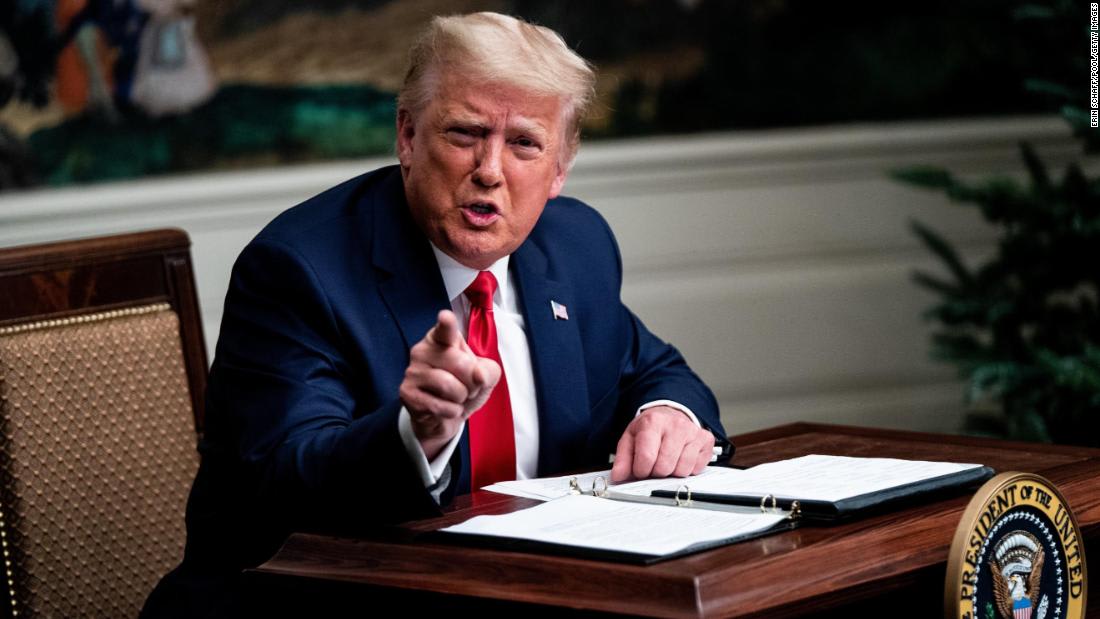 Russia confirmed 27,543 new Covid-19 cases on Friday, the highest number of infections it has reported in a single day, according to data from the country’s coronavirus response center.

This is more than 2,000 cases higher than the previous record reported yesterday.

Moscow, the country's worst-affected city, accounted for 7,918 new cases -- also a new record for the capital. On Thursday, Moscow Mayor Sergey Sobyanin, extended some remote work and self-isolation restrictions in the city until Jan. 15.

The total number of coronavirus cases in Russia now stands at 2,215,533.

The number of deaths due to the virus in the country increased by 496, bringing the total to 38,558. A CNN investigation previously revealed that official Russian coronavirus death figures may grossly understate the real toll by excluding people who are presumed to have Covid-19 post mortem and even those with pre-existing conditions that proved fatal due to the infection.

Vaccinations against Covid-19 might not start in Africa until the middle of next year, the head of the continent’s disease control group said on Thursday.

“We are very concerned as a continent that we will not have access to vaccines in a timely fashion,” the director of the Africa Centers for Disease Control and Prevention, Dr. John Nkengasong, said at a news conference, adding “I have seen how Africa is neglected when drugs are available” in the past.

Nkengasong said the goal was to vaccinate 60% of the continent's population to achieve herd immunity.

Call for leadership: The World Health Organization (WHO) said in a statement Thursday that their new analysis has found that Africa is far from ready for what will be the continent’s largest ever immunization drive and urged African countries to urgently ramp up readiness.

According to WHO data, just 24% of countries surveyed have adequate resource and funding plans, and just under half have “identified the priority populations for vaccination and have plans in place to reach them.”

“Planning and preparation will make or break this unprecedented endeavor, and we need active leadership and engagement from the highest levels of government with solid, comprehensive national coordination plans and systems put in place,” Dr. Matshidiso Moeti, WHO regional director for Africa, was quoted saying in the statement.

Vaccine drive will cost billions: WHO estimates the cost of rolling out a Covid-19 vaccine on the African continent to priority populations will be around $5.7 billion. The figure does not include additional costs of up to 20% extra for injection materials and the delivery of vaccines, which require trained health workers, supply chain and logistics and community mobilization.

Adam Skelly, who owns Adamson Barbecue, is being charged with one count each of attempting to obstruct police, mischief, failing to comply with a continuing order and failing to leave when directed.

The restaurant was seized by the Toronto Police Service Thursday morning, the locks were changed and all persons were restricted from access to the premises, said Toronto police.

"He had a lot of the anti-mask people there," Tory told CNN on Thursday. "It was like it was a festival they were having to try and celebrate some of their unorthodox views."

"But I think the vast majority of people don't accept that. They're trying hard to make the sacrifices that are terrible in some cases to make sure we can all get healthy," said Tory, adding that he believes Skelly will "face huge fines" if convicted.

Tighter restrictions: Toronto began a four-week lockdown this week amid an exponential rise in Covid-19 cases and as ICUs near capacity. All dining, non-essential shopping, salons and gyms have been ordered closed.

And on Thursday, Toronto's mayor told CNN he wasn't ruling out an extension of the lockdown to last through Christmas and New Year's.

“At that point we -- advised by the experts -- will look at each local authority area in the country and see whether they should remain in their existing tier or whether there is potential to move down the tiers,” Jenrick said in an interview with Sky News.
“There are a number of places which were quite finely balanced judgements, where they were on the cusp of different tiers, so those are the places which are perhaps more likely to be in that position."

But Jenrick cautioned that any adjustments to local tiers would require careful consideration, highlighting the potential for local infection rates to rise over the holiday period.

“There will be an opening over the Christmas period which is likely to drive some higher rates of infection, if some people choose to meet family and friends for Christmas Day and the days surrounding it, so we have to bear that in mind,” Jenrick said.

“What we don’t want to do is ease up too quickly and then find that in January we’re having to put tiers back in place again,” he added.

A review of the national tier system is expected to take place on or around Dec. 16

The Health Ministry also reported 29 new deaths from the virus.

Of the new cases, 481 were from the capital Tokyo.

On Thursday, Prime Minister Yoshihide Suga asked for the public's cooperation over the next three weeks to stem a resurgence in coronavirus infections.

“The next three weeks are crucial," Suga said. "We would like to ask all people to take basic precautions to prevent the spread of infection, such as wearing masks, washing hands and avoiding closed, crowded and closed-contact settings.”

Suga added that the government has asked restaurants and bars to shorten their business hours in Tokyo, Sapporo, Osaka and Nagoya.

"We, as a nation, will continue to support all businesses that cooperate,” he said.

"When the doorbell rang, and a familiar voice asked, 'Is anyone home?' my son and granny ran to open the door as if they were expecting someone," the resident is quoted as saying. "The person who walked in smiling was my son's primary school home teacher."

The article explains that teachers visit their students every three days. "Where there are students, this holds true for any district, ward and unit," the resident says.

On Nov. 20, state-run news agency KCNA announced the creation of "new efficient educational method" for students to improve self-study and practical abilities in education through tele-lectures and home study in light of "the lingering emergency anti-epidemic campaign."

According to state media, North Korea’s “Pedagogical Institute” devised the tele-education program, which various primary, junior and senior middle schools in Pyongyang have adopted. The program reportedly allows students to receive lectures at home via computers and TVs.

Some context: North Korea has repeatedly claimed it is free of the coronavirus. In a speech last month its leader Kim Jong Un said he was thankful for the country not having a single Covid-19 case.

But last Sunday, the country called for stricter border control and anti-virus control measures amid the worsening pandemic, according to the Rodong Sinmun, the official newspaper of the Worker’s Party of Korea.

India’s national cricket captain, Virat Kohli, has hit back at criticism of his decision to take lengthy paternity leave from his team's ongoing tour to Australia for the birth of his first child.

Speaking in a news conference via video link on Thursday, Kohli explained that he will be subject to two quarantines when he travels home after the first test match of India's first overseas series since the start of the pandemic.

Kohli said his travel dates were “purely based on the fact that we have a quarantine period both ways.”

The top-order batsman added that the decision had been made with the support of the Board of Control for Cricket in India's (BCCI) selection committee.

"And I wanted to be back home in time to be with my wife for the birth of our first child. It’s a very, very special and very, very beautiful moment in our lives and something I truly want to experience. So that was the reason behind my decision," he said in his address, posted on the BCCI’s Twitter account.

Why the controversy? Earlier this month, Indian cricket officials announced that Kohli would miss the final three test matches of the Border-Gavaskar Trophy in Australia. It’s been a talking point in India ever since, with some even questioning Kohli’s patriotism.

There has, however, been immense support for the Indian skipper’s decision from former cricketers, international players and fans.

The birth of Kohli's first child with his wife, Bollywood actress Anushka Sharma, is expected in January.